There’s not a lot of variables in a Philadelphia cheesesteak. In its classic configuration there’s a roll, meat, cheese, onions, and garnishes. While there’s some play in each of the five variables there’s really not much a cheesesteak joint can do to clearly stand out from the crowd, despite what most writers on the subject would have you believe. Some are better than others, sure, but we find that the day-to-day and month-to-month variation from the same joint is greater than the variation between joints. Which means your favorite today might not be your favorite if you compare tomorrow, or next month. So don’t get too bent out of shape seeking out the one place that someone claimed makes the best. Go to any of the dozen or so places frequently named and you’ll likely enjoy the results. 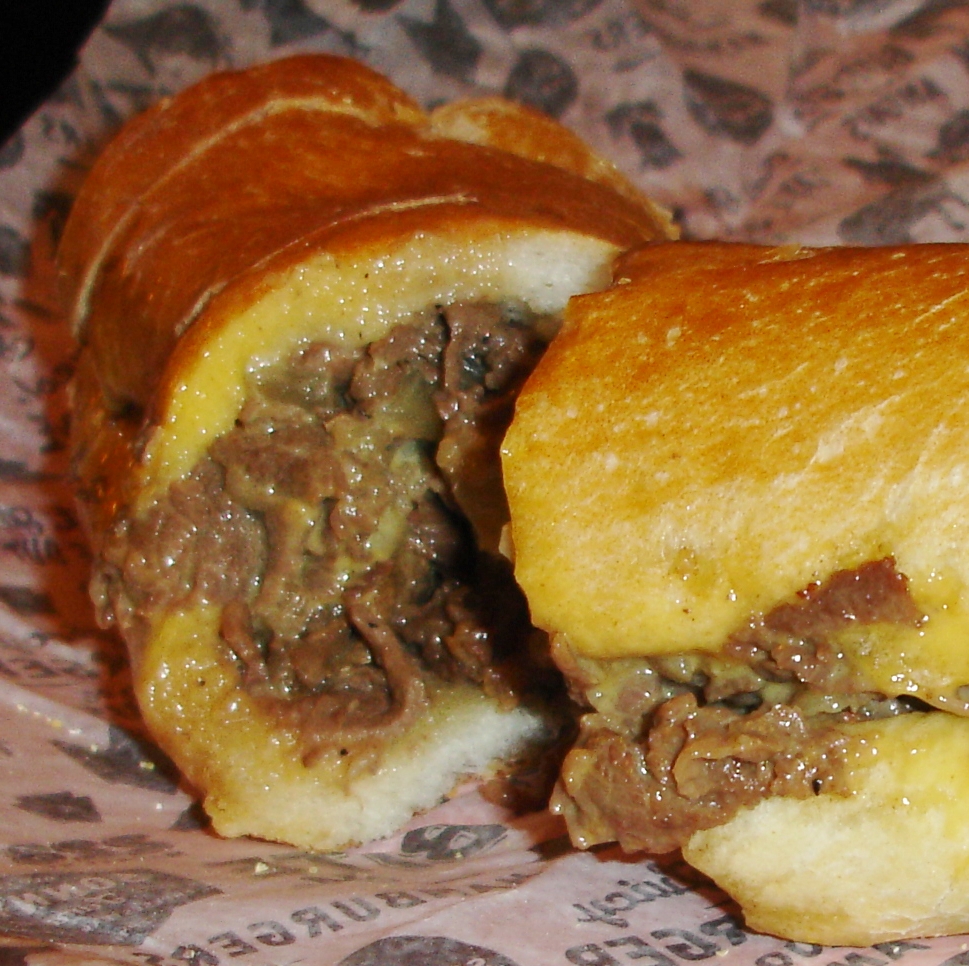 Another cheesesteak view, showcasing just how well-blended the different elements are at Sonny’s.

The roll: most places use Amoroso’s or Liscio’s, and both work well, but more important than the brand is the freshness of the roll.  The meat: again, most places use sliced ribeye. Here’s where you get the most variation. The meat can be left sliced, chopped into large pieces, or chopped into a hash. Each style has its adherents (our favorite, from Steve’s, is sliced and left whole). Sometimes the meat can be gristly, sometimes the meat can be dried out from overcooking, and some places season the meat while others don’t. 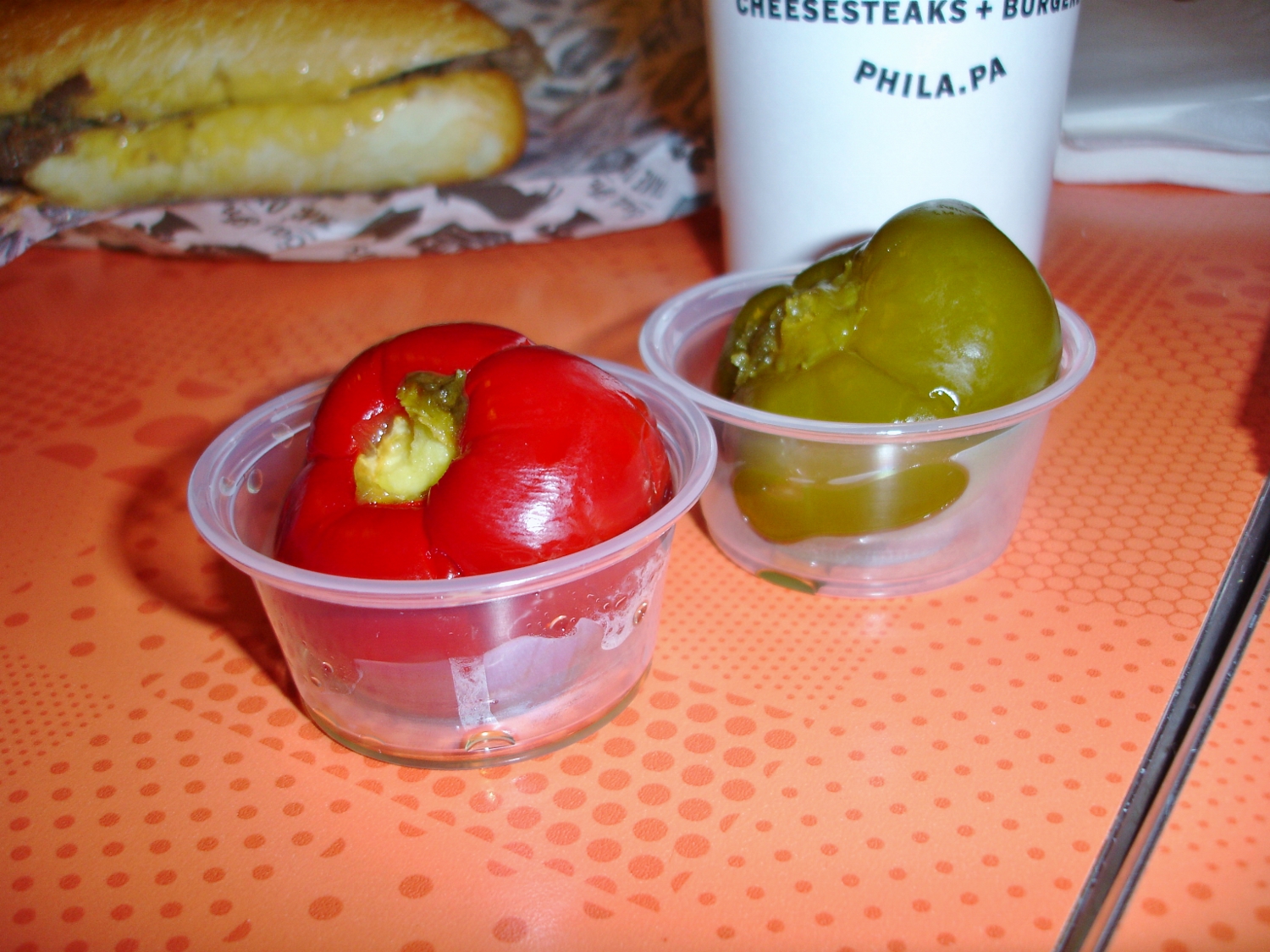 Hot cherry peppers come in red and green. We like to tear them apart and lay the pieces on our steaks.

The onions: are they well-cooked to the point of softness or even caramelization or do they retain a little firmness? Are they oily (not necessarily a bad thing)? And, again, are they seasoned? The cheese: the biggest variation is in the varieties offered, not the cheeses themselves. American, provolone, and Cheez Whiz are the standards, but some places only offer one type of cheese, and others may offer mozzarella. If you like Whiz, as we do, the main variable is, how much do they put on? Garnishes: do they offer hot sauces and various peppers? 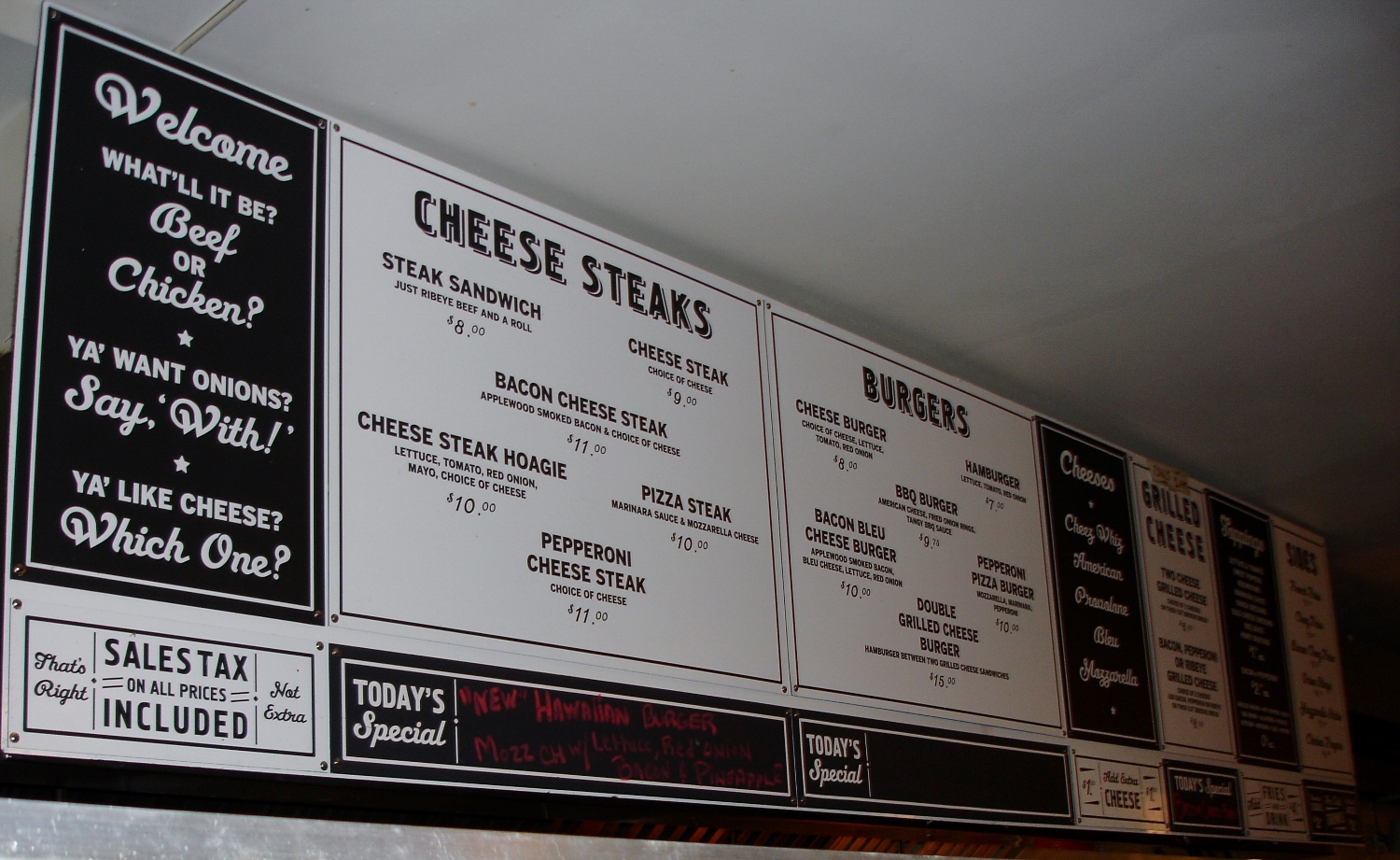 Cheesesteaks, burgers, and grilled cheese sandwiches are all Sonny’s offers, other than sides and drinks. There is bleu cheese for your cheesesteak, if that’s what you really want.

So, finally, Sonny’s: they use fresh Amoroso’s rolls, the meat is chopped, but not finely, the onions are soft, and they offer, in addition to the big three cheeses, mozzarella and bleu. The most distinctive and, in our minds, positive characteristic is the juiciness of the meat. It looked to us that they were sprinkling water from a bottle on the meat as it cooked, a very unusual move. We were skeptical but the results proved otherwise: we loved the beefy juiciness. They use plenty of Whiz too. 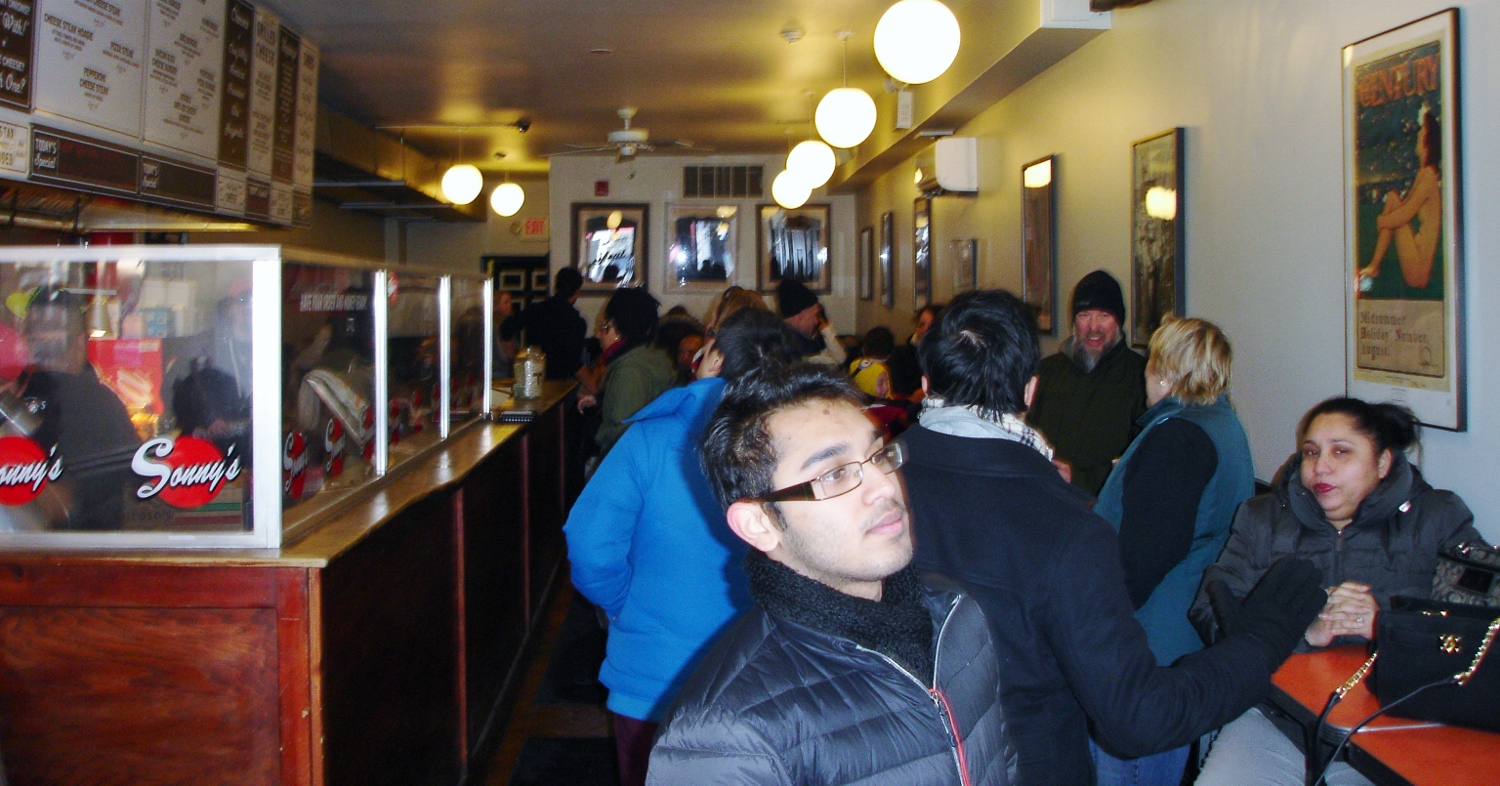 Place your order, then find a table.

We’ve read that the meat is not seasoned as it cooks and, while we don’t know for sure if that’s true, if it is, you may find the cheesesteak to be underseasoned if you take your steak with something other than the very salty Whiz. As in all things, especially things edible, decide for yourself. 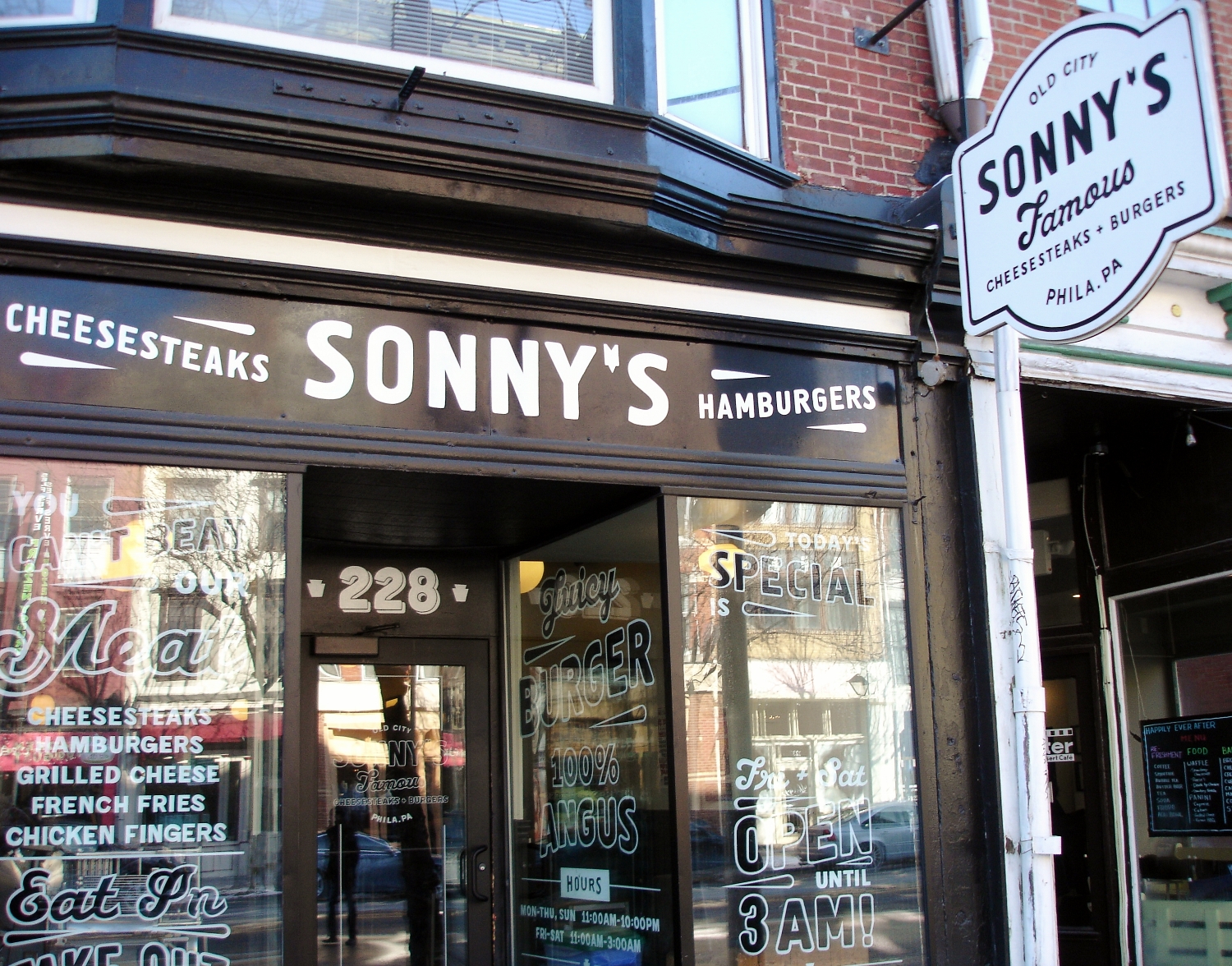 Sonny’s, open only since 2000, has earned its spot in the Philly cheesesteak pantheon.

The resulting sandwich blends nicely into a unified whole. If we wanted to give a friend a first-time exposure to the Philly cheesesteak, we’d probably bring her here before exposing her to the idiosyncratic Steve’s.

The place itself, on Market Street just a few doors down from the well-known and more established Campo’s, opened in 2000, making it a baby in the cheesesteak landscape, although it feels like it’s been there a lot longer. You enter the narrow space with the cooking area to your left, black and white menu signage hanging above. After placing your order you’ll get a number and find a table. When you hear your number called (we were charmed by the chick calling out numbers – “69, heh, heh” – a young woman with the juvenile sense of humor of a teenage boy), get your food and head to the garnish station for the hot peppers of your choice.

Sonny’s also offers burgers, fries, onion rings, even grilled cheese sandwiches. We tried none of them. They also offer cheesesteaks garnished with bacon or pepperoni, options that we’ve seen for years in suburban joints but rarely in the big-time city cheesesteakeries. We’ve had cheesesteaks both ways over the years and, while they are not at all bad, they somehow become a different food altogether.

BEST THING TO EAT: Cheesesteak with Whiz and onions