One day in early 1947, Kate Smith mentioned on her radio show how much she would enjoy a taste of Vermont maple. The local citizens of Somerset County in Pennsylvania, inspired by this comment, sent her some of their own Pennsylvania brew. Kate’s response? In April, she proclaimed on her show that Somerset County maple syrup is the sweetest she ever tasted! And so the seed was planted for the Pennsylvania Maple Festival in Meyersdale, which was first held the following March. 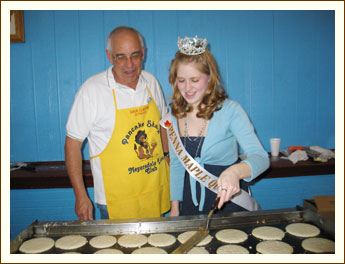 The local Lions serve pancakes and sausage, with local syrup, every day of the festival.

This year’s 68th annual festival will be held March 21st and 22nd, and then March 25th through 29th. Visit The Sugar Shack to watch the process of turning tree sap into that magical elixir, and then head over to the Lions’ Famous Pancake and Sausage Breakfast for an all-you-can-eat repast featuring locally made syrup. 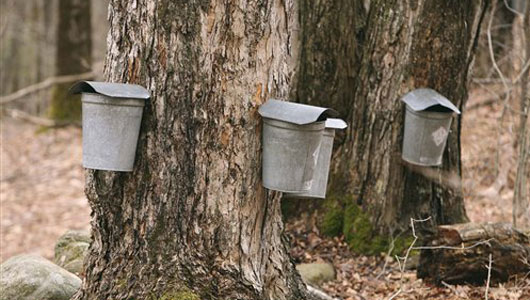 Visit Maple Festival Park for a taste of spotza, which is the local name for the taffy-like candy known elsewhere as “sugar on snow.” At The Country Store you can purchase maple products, pickles and apples from the barrel, homemade bread, apple butter, and all sorts of other good things to eat. Children can enjoy tea with this year’s Maple Queen. 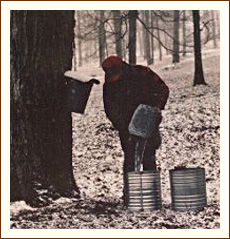 Collecting maple sap in the days before plastic tubing

Other activities include a parade, a festival dance, a 5K walk and 8K run, a street rod and auto show, a classic car cruise, antique tractors and cars, tractor games, a truck and motorcycle show, and a horse pulling contest. An historical pageant will be performed at the high school. Maple Festival Park will feature craft and food vendors, a quilt show, a historic homestead, antique doctor’s office, and a cobbler’s shop, costumed interpreters, children’s activities, and live entertainment. Admission is $5 for adults, $1 for children, and free for kids 5 and under. Get more details here.