Tucked away in a corner of central North Carolina, Siler City is a half-hour from Greensboro and any interstate highway, which makes Johnson’s Drive-In a destination lunch. Serving up burgers and fries since 1946, Johnson’s is a humble house that sits among chain fast-food joints on Highway 64 that crosscuts town. Inside, you’ll find a dozen counter stools and a handful of four-tops and, most likely, a long line of hungry customers. Open only for lunch from 10 a.m. to 2 p.m., the business closes when they run out of burgers—which happened to a patron’s son sitting next to me at the counter. “I knew I was cutting it close when I got here at 1:50 last summer,” he explained to me. “But I live in Florida and haven’t been able to return until today.” 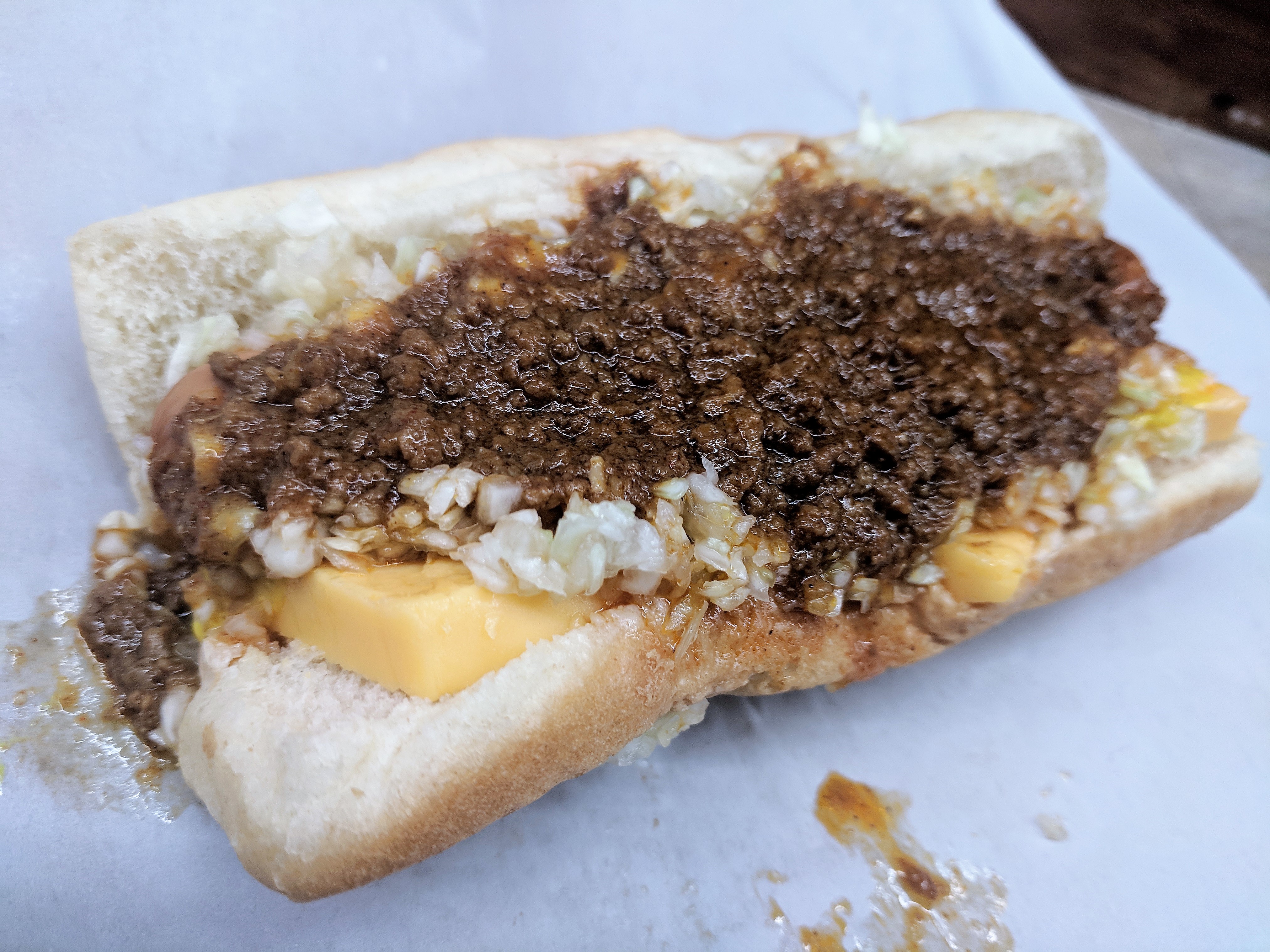 A Combo Dog at Johnson’s means it gets sided by a log of cheese, topped with slaw, and blanketed with all-meat chili. The area’s best!

Johnson’s is helmed by Claxton Johnson, a man who knows about cheeseburgers. He and his family grind the beef fresh every day, and he often runs the griddle when the first customers start queueing outside the front door a little before 10 a.m. By the time we arrived just after noon, Johnson had already conceded the spatula to a family staffer, though he would peer over at the steaming griddle often. His cooking method is simple: a ball of ground beef is placed on the grill then pressed down into a thick patty with the spatula. After flipping the patty, a large (at least three-quarters of an inch) slab of Velveeta is added, followed by the top half of a toasted bun so the cheese melts into the bread. The bottom bun is arrayed with the customer’s choice of mustard, ketchup, chili, slaw, onions, lettuce or tomato, and finally the top assembly is gloriously lowered into place. 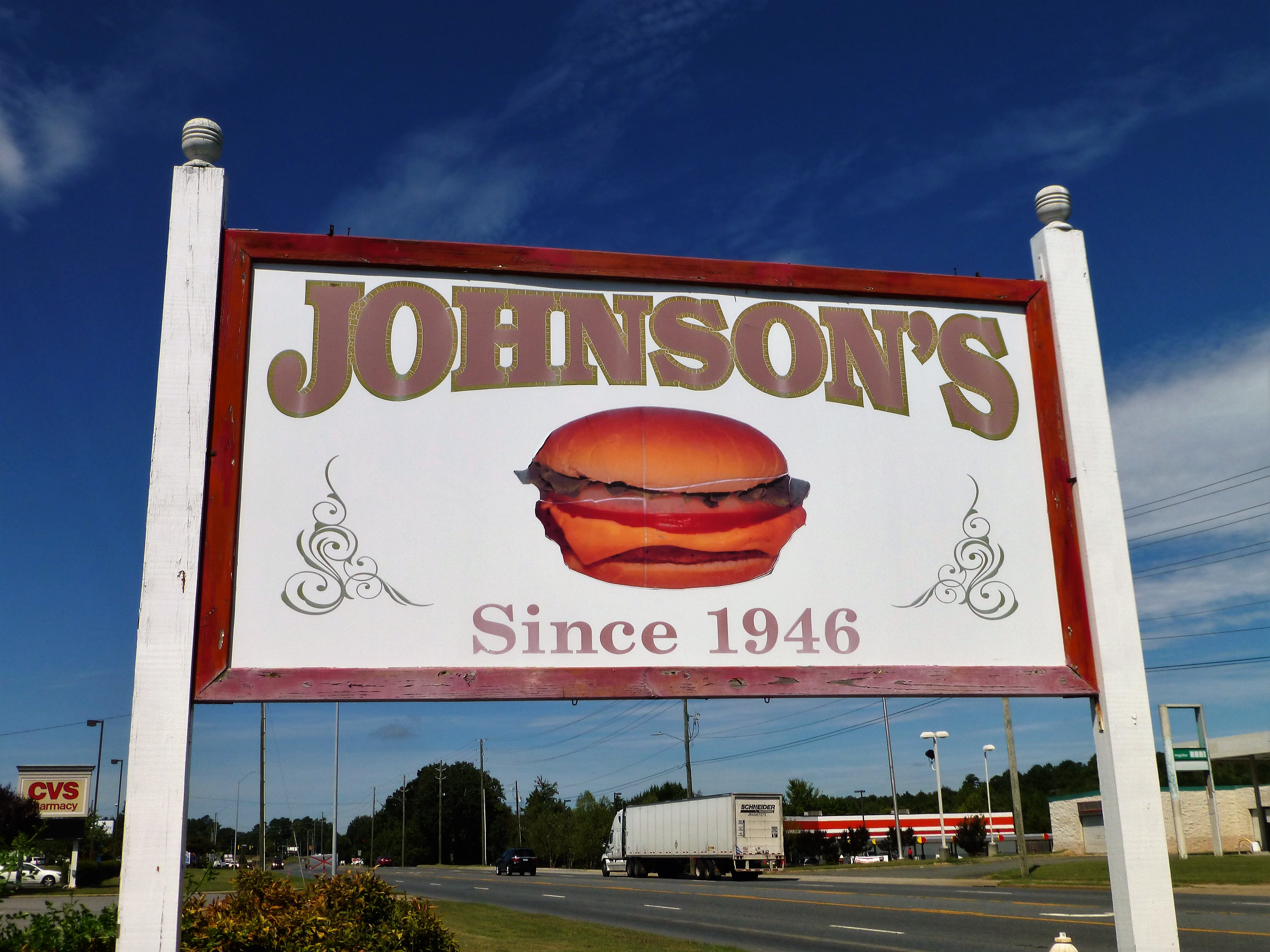 The first bite is quite different, with only the cheese on the top bun and condiments on the bottom. After the second and third bites, however, you realize that this is easily one of the state’s finest burgers and a Top Ten entry for the South in general. The meat is perfectly juicy with a slightly crunchy char from the griddle, and the various condiments make the burger truly sing. As the cheese cements the top bun in place, the condiments on the bottom are just enough so as not to drip out very much or cause major bun slippage. The Velveeta, which is uncommon for burgers, works brilliantly here as the glue that binds all these tastes together—working especially well with chili. It’s certainly not the biggest burger out there, nor the smallest, but in the end it’s extremely satisfying.

Aside from burgers, there’s not much else to offer: grilled cheese sandwiches or hot dogs. On my second visit, I ordered a combo dog in the name of research. In most of the state, a combo dog means a hot dog with cheese, and this beauty had a square log of cheddar nestled next to the steamed wiener. (Conversely—and somewhat confusing if you don’t know the parlance—a cheese dog is just a log of cheese in a bun.) The wiener, of no particular provenance, was smothered with Johnson’s outstanding chili—finely-grained and all meat, no beans, specifically made for dogs and burgers—and homemade slaw. This hot dog was as good as you can get in this area: Boston Sandwich Shop in Burlington may take the top prize, but Johnson’s is a close second.

Another curiosity is the fries. Order them with your meal, but since the burgers take longer to cook, your fries will come out first. Frozen fries usually don’t excite me, but when I had the chance to start my meal with them only, I discovered that I ran out of fries before I finished my burger and dog—instead of the other way around. How many times have you left behind a pile of cold, soggy fries after your burger was long consumed? There is virtually no fry waste at Johnson’s, for you’ll be famished after the long drive to get here!

The antiquated soda fountain in the center of the counter is long broken, so canned sodas and sweet tea from a syrup concentrate are the only drink choices. Locals dominate the booths, and the line of folks near the cash register are waiting for seats or to-go orders. The interior of the restaurant has not been updated in decades, which shows that the Johnson family is focused solely on making the finest cheeseburgers for the finest customers. Wait in line patiently, strike up a conversation with the folks around you, and prepare yourself for cheeseburger nirvana! Johnson’s Drive-In is open from 10 a.m. to 2 p.m., Tuesday through Saturday (closed Sunday and Monday).