Did You Have Your Black Eyed Peas and Cornbread This New Year’s Day?

America’s burger mania will apparently continue through the new year (it’s got us, too). Here are the 101 best burgers in the U.S. according to The Daily Meal. You’ll find such favorites as the double cheeseburger practically deep-fried in 100-year-old grease (if it were true, would you publicize that fact?) at Dyer’s in Memphis; a cashew burger (topped with cashews) at Anchor Bar and Grill of Superior, WI; and The Varsity of Atlanta’s double chili cheeseburger.

Did You Have Your Black Eyed Peas and Cornbread This New Year’s Day?

Black eyed peas, greens, and cornbread – that meal is said to bring one luck when eaten on New Year’s Day. Why is that? More importantly, as far as we’re concerned, is why we don’t eat that meal more frequently. If you’ve ever enjoyed the combo prepared by a Southern soul food chef, you know what we mean. WFAA of Dallas-Fort Worth visits Sweet Georgia Brown cafeteria in Dallas to learn more. Resolution #1: eat more black eyed peas, greens, and cornbread! 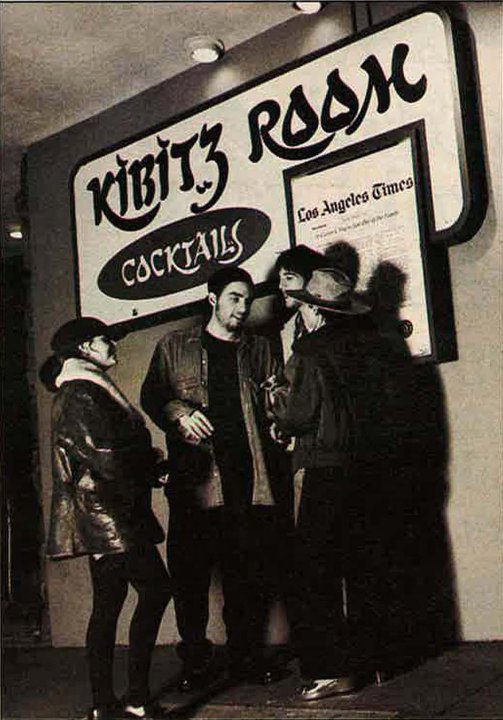 The Wallflowers outside the Kibitz Room, the lounge attachment to LA’s Canter’s Deli and one of America’s “diviest dive bars”

It’s a listicle, sure, but for some reason we enjoy this one: the 32 Diviest Dive Bars in America. What’s the attraction, the cheap liquor? The greasy eats? The pool tables? The chicken shit bingo (live chicken, bingo card coop floor, you figure it out) at Ginny’s Little Longhorn Saloon of Austin? They even honor one of our favorite dive bars, Rudy’s Bar and Grill in Manhattan, where we love the cheap pitchers, free hot dogs, and backyard patio. Yes, in NYC!

Very impressive! Not only does Governor-elect Larry Hogan get a sandwich, Hogan’s Hero, at Chick and Ruth’s Delly in Annapolis, he gets a soup, too. It’s his idea, and Delly owner Ted Levitt broke with tradition by giving Hogan two menu items. Levitt was skeptical at first about the soup, but was assured by his counter help that people love the combo – Maryland crab soup is first ladled into the bowl, and then a ladle of cream of crab is placed within, unmixed. Do you mix it up before eating, or eat it like a soupy pousse-café? That’s up to you.