We love Pepe’s. We really, really love Pepe’s. Bruce’s single favorite food on earth is a Pepe’s white clam pizza. Alright, now that we’ve got that out of the way, let’s see if we can begin to explain why. 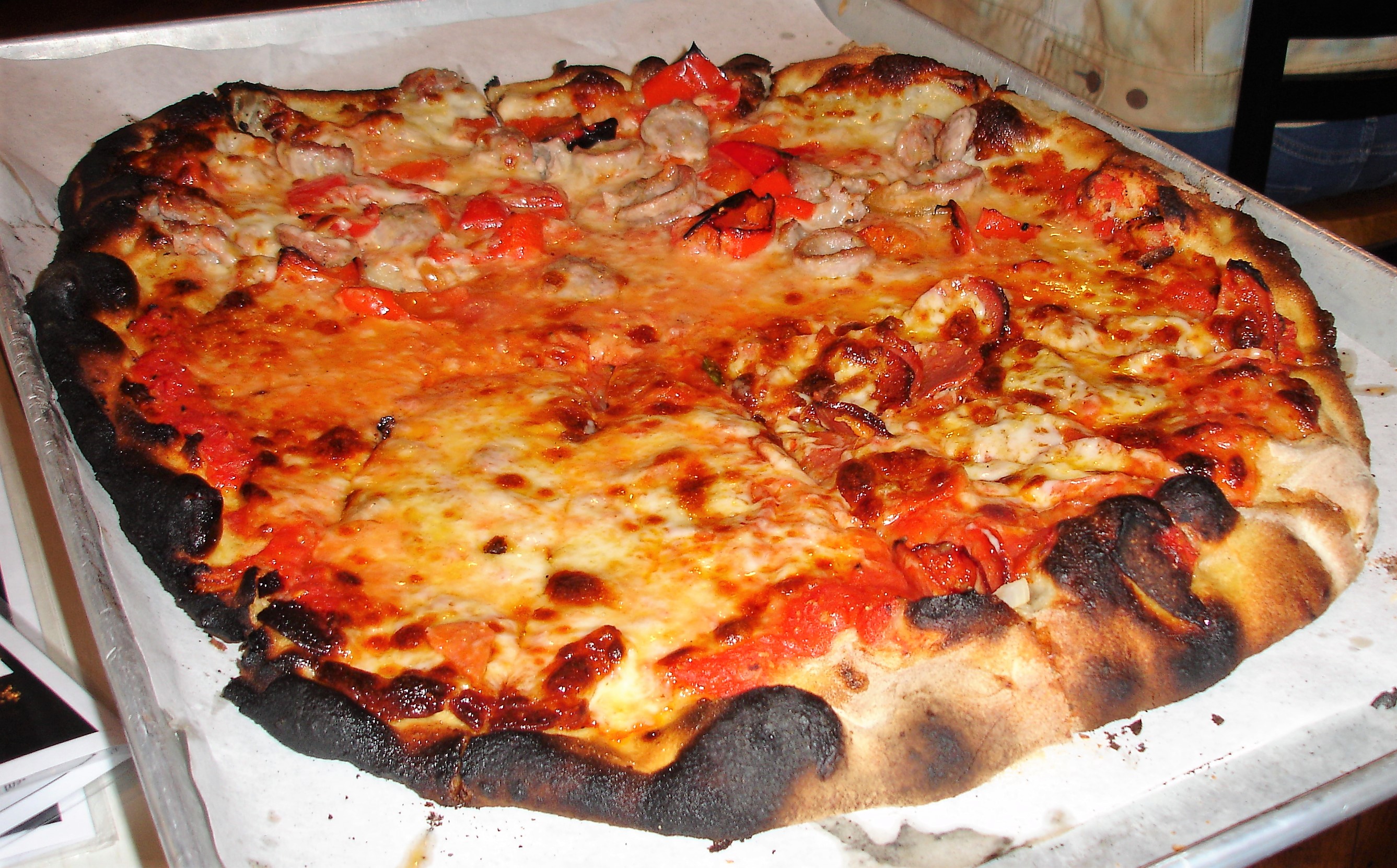 The pizzas were coming out especially dark on this day. Not too much so for us but a table next to ours sent their pie back.

Everything in a pizza is important but, for us, the single most important element is the crust. It wasn’t until we sampled our first pizza from Frank Pepe Pizzeria Napoletana in New Haven, CT that we understood that the crust of a pizza was not simply a delivery system for cheese, tomatoes, and pepperoni. Like many people, we used to leave the bones (the bare crust around the circumference of a pie). Understand, this was before the days of artisan pizza, where master pizzaioli import the flour from Italy and ferment their doughs for days at a time. 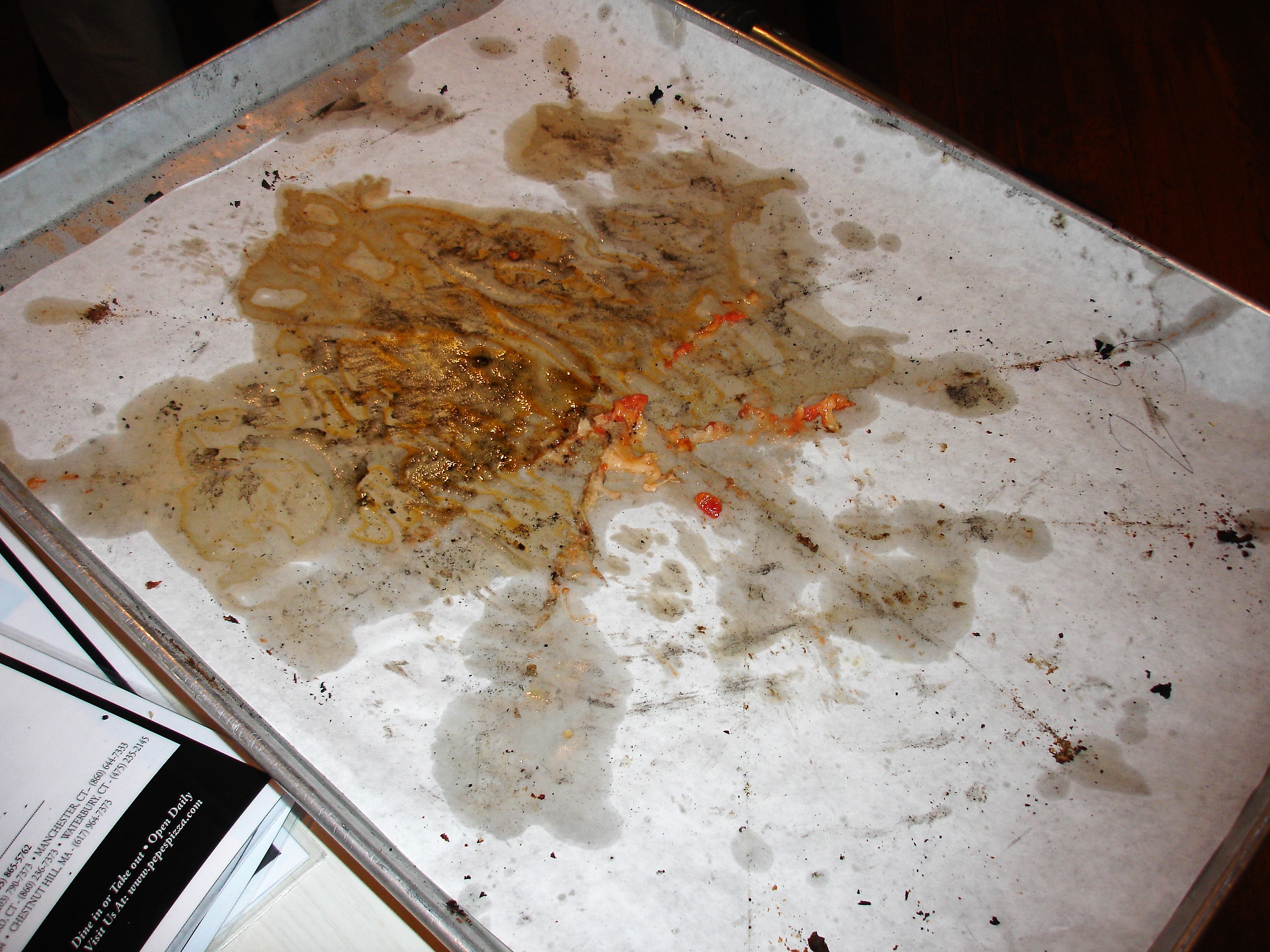 A properly made Pepe’s pie is well-oiled. Not for fat-phobes.

The crust of a Pepe’s pizza, chewy, scorched, and full of flavor, is worth eating in its own right, bones and all. And the best way to top that crust is with fresh clams. Pepe’s made its name decades ago with the fresh clam pizza and it remains the best thing to eat in the house, by far. The clams are those harvested and served in northeast Massachusetts as fried clams, called soft-shell clams. Along with clams, the pizza gets a good dose of garlic, a sprinkle of oregano, a dusting of grated cheese, and oil. No tomatoes, no sauce of any kind. The result is pizza perfection, but you have to enjoy clams to enjoy this pie. The clams are cut up, but not into those anonymous little bits you get from a can. When you eat a Pepe’s clam pie you are definitely eating clams. 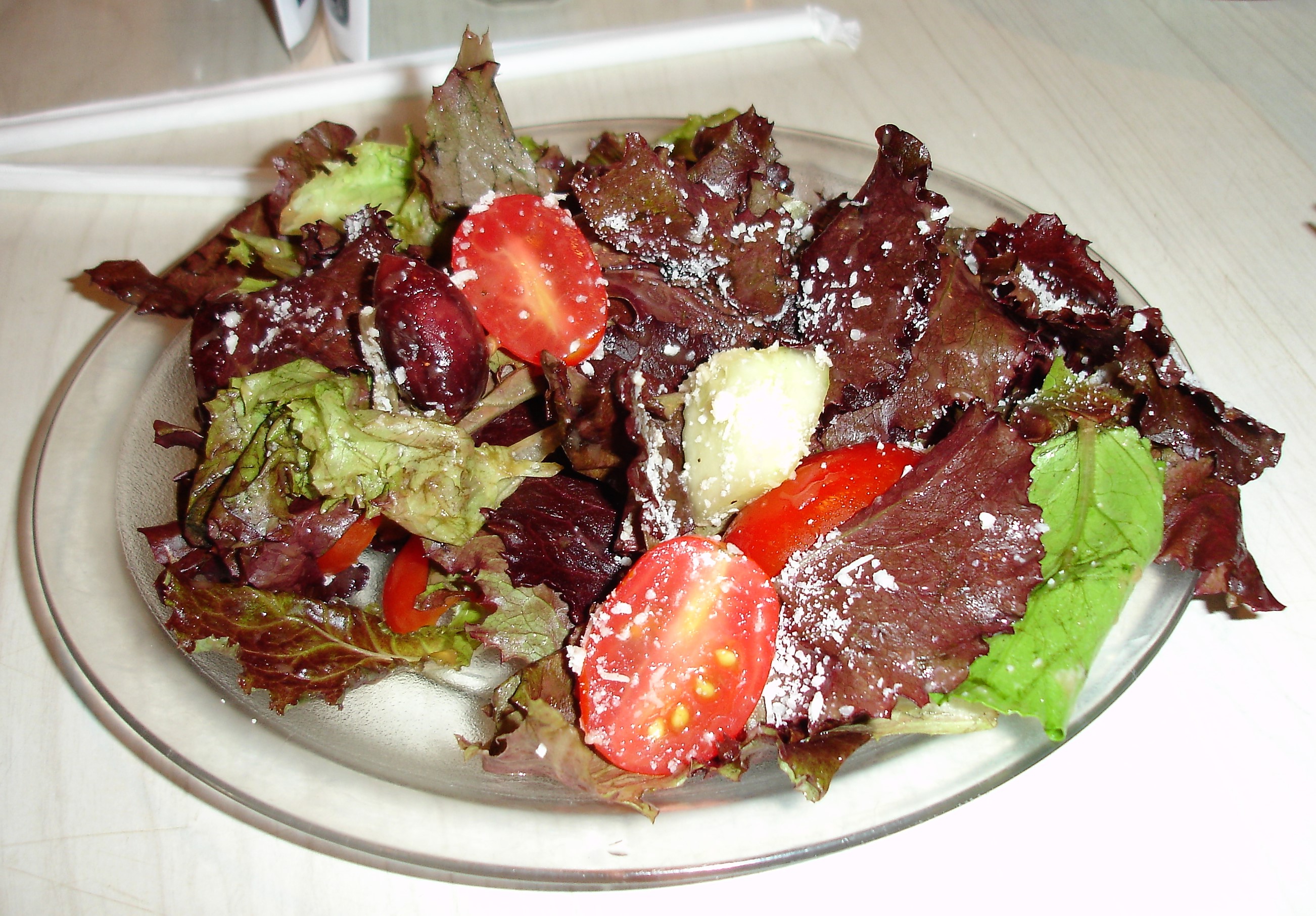 The simple green salad is an ideal way to pass the time while your pizzas cook. A small salad will suffice for two of you.

Over the years, others have produced white clam pies, some claiming them to be New Haven-style or Pepe’s-style. Every white clam pie we’ve tried, save one, is not in the same league as Pepe’s. That one good rival to Pepe’s, Zuppardi’s in West Haven, makes a spectacular pie. In our view, it’s not quite as satisfying as Pepe’s white clam, lacking Pepe’s rustic raunch. Others may disagree. 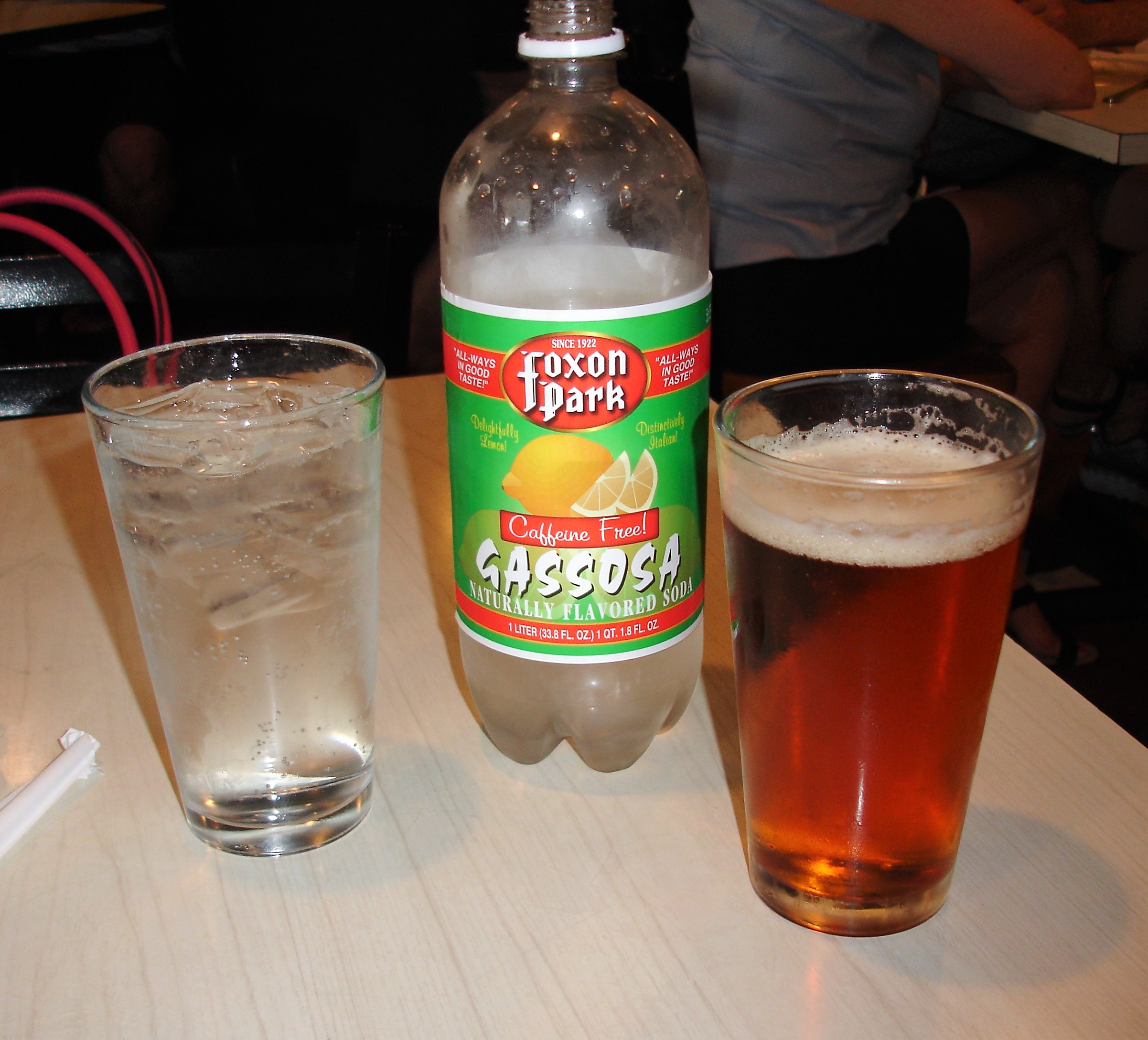 What about pizzas without clams? Here’s what we think is important to know: 1) They make their own roasted peppers, and they are a terrific pizza topping. 2) The pizzas are well-oiled. We love that. You might have a different opinion. 3) The pizzas are well done. We love that as well, feeling that it brings out the fullest flavor in the crust. Not everyone enjoys that. 4) The toppings such as sausage and pepperoni (and the cheese) are fine but are not what makes Pepe’s pies so special. Don’t ask for too many toppings, which weighs down the crust, Pepe’s strength. An excellent choice is the pie said to be the favorite of Frank Pepe himself: tomato sauce and grated cheese. No mozzarella. It’s superb! 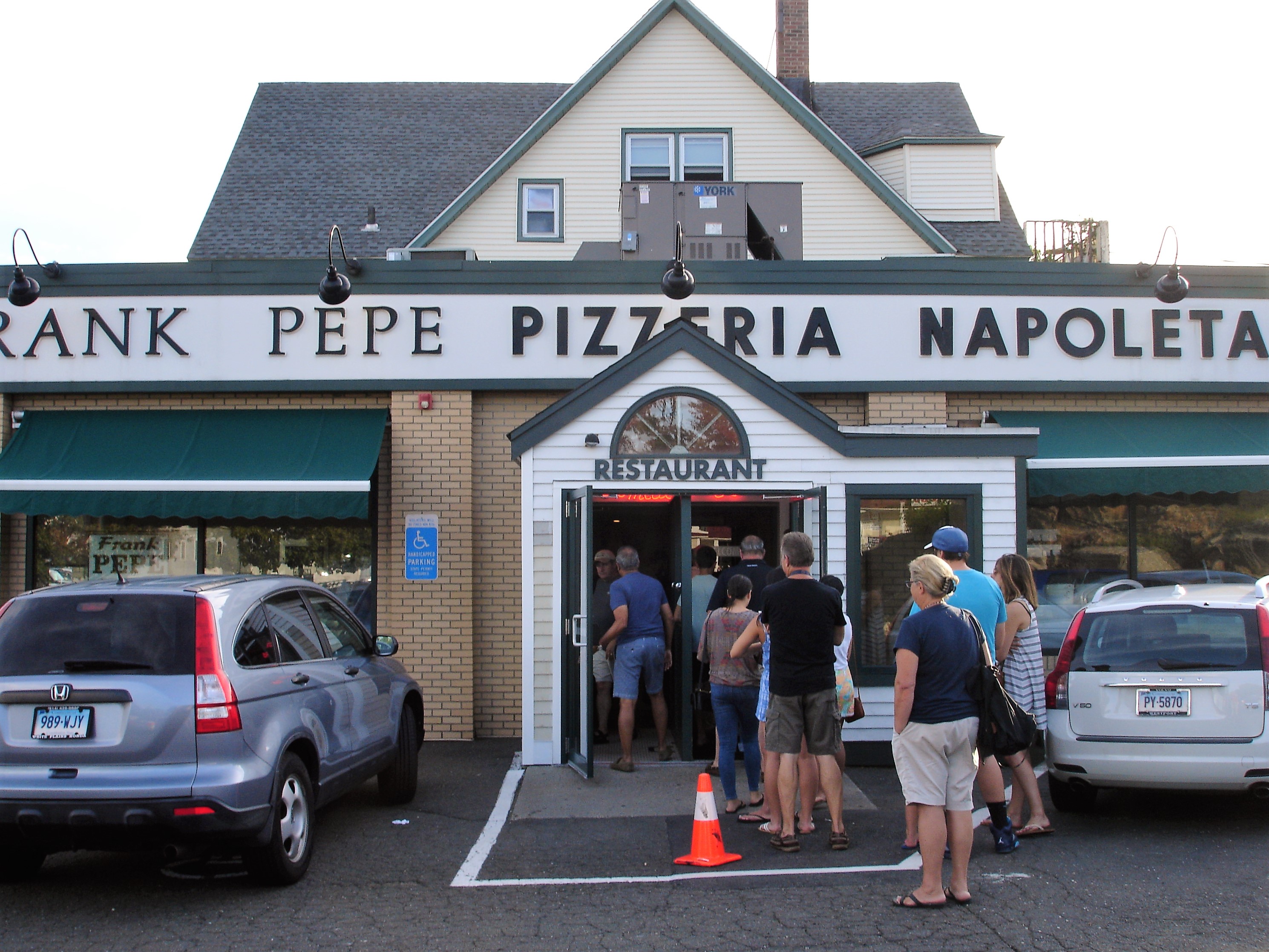 We were lucky enough to waltz right to our table but by the time we left a line had begun to form. Expect to wait at least a few minutes.

Frank Pepe started his pizzeria in 1925, and obviously he’s long gone. One thriving pizzeria will support a family quite nicely, but one’s many descendants? Not so much. A small piece of the pie is not enough to live on. The solution? Make the pie bigger. They did this by opening more pizzerias around the northeast.

As we write this there are nine Frank Pepe Pizzeria Napoletanas: one is in Yonkers, NY, one can be found in Chestnut Hill, MA, and the other seven are scattered around Connecticut. Anyone who has witnessed the growth of a local favorite knows that it almost invariably spells disaster, food-wise. Somehow, this is much less so in Pepe’s case. It’s true that at least a couple of branches are not up to snuff but we’ve found the pies turned out by the pizzaioli in Fairfield to be just about as good as those from the New Haven original.

The Fairfield location has a few advantages over the New Haven store. It’s much quicker on and off the interstate if you are just passing through. Parking is easier. It’s also a larger restaurant with a lot more table seating available. New Haven is mostly booths. While there is often a line in Fairfield, it’s usually a bit quicker than the one in New Haven.