We’re suckers for farmers markets, both at home and when we travel. We love to cook, so when we’re home we focus on the just-picked produce piled in colorfully billowing mounds on the tables and in baskets. We love to eat, so when we travel, we wistfully ogle the fresh fruit and veggies but focus our serious attention on the local cheeses, breads, wines, juices, pastries, and prepared foods.

The farmers market in Dorset, Vermont operates Sundays, 10 a.m. until 2 p.m. year-round, and it’s a true producer-only market, so our late-December visit naturally was light on the produce. No problem there, because the Earth Sky Time Community Farm and Hearth, out of Manchester, was present and accounted for. It’s here we picked up one of the greatest breads we’ve ever had the pleasure of tearing into, their olive rosemary loaf. 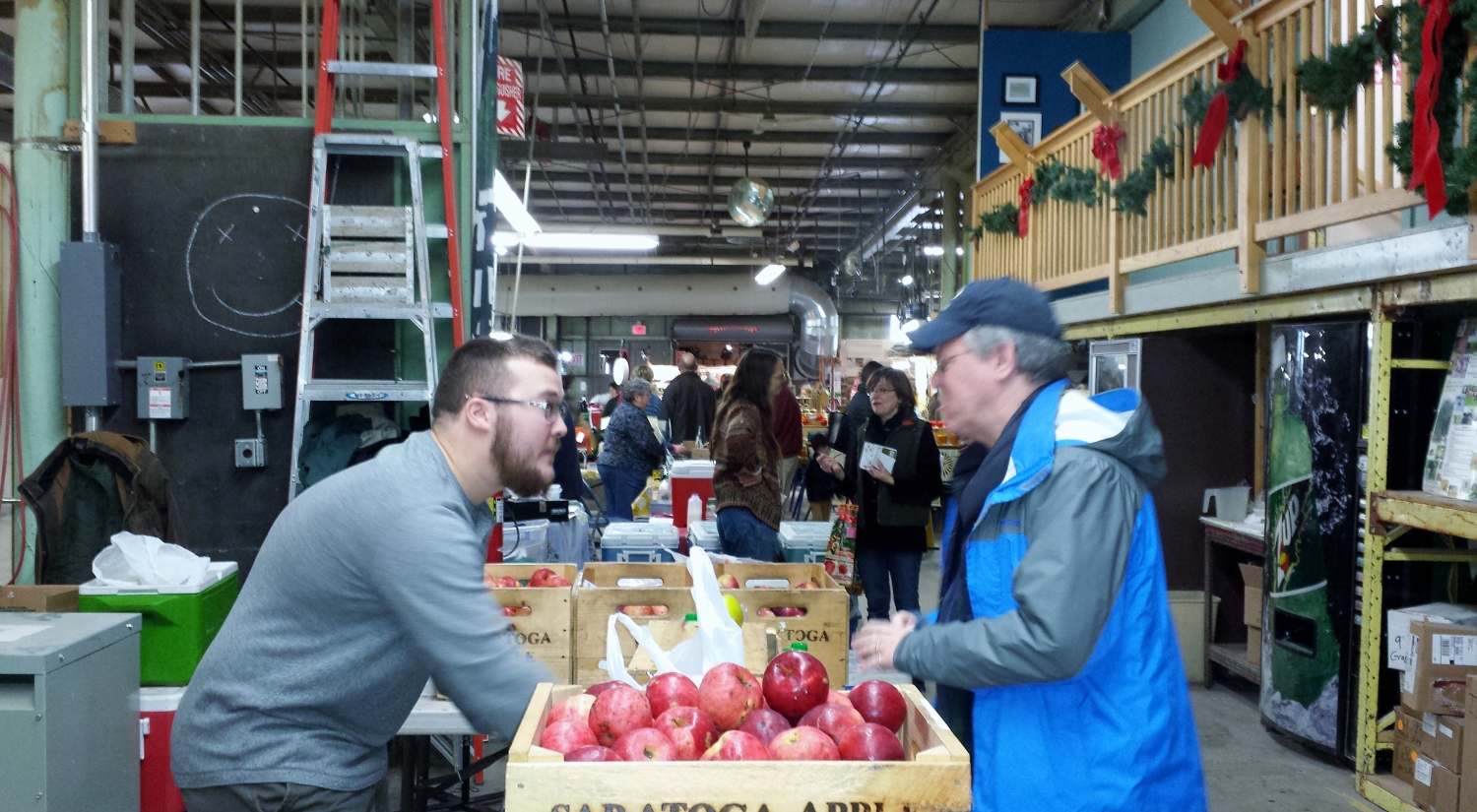 The market is held in winter in the J.K. Adams warehouse. On the balcony to the upper right was a gentleman singing and playing guitar.

We’ve had olive and rosemary breads before, and we love them both separately and together, but this one surprised us with one particularly unique characteristic: the bread is not studded with olives and sprinkled with rosemary needles. Instead, they make an olive rosemary tapenade, which gets spread on the rolled out semolina dough, which is then rolled up and baked. The thick seams of tapenade cause the bread to lose a little of its structural integrity when sliced but that’s more than compensated for by the superb flavor of the chewy crusted tapenade/bread combo.

We also bought a chewy and satisfying whole wheat baguette coated with blue poppy seeds, which disappeared in minutes. All of Earth Sky Time’s breads are naturally leavened and allowed to rise slowly to fully develop the flavors real bread fans crave.

Also in the market is Consider Bardwell Farm from up the road in Pawlet (the curious name comes from the founder of the 1864 farm, Consider Bardwell). If you’ve dined around some of Vermont’s top restaurants, and sampled something that included cheese which struck you as particularly delicious, there’s a good chance that cheese came from Consider Bardwell. The two you see most often are the soft-ripening Dorset and the farmy Pawlet. There’s also an aged Rupert and some chevres. Have a taste at their table in the market. We can assert from experience that Pawlet makes a kick-ass grilled cheese sandwich, especially when made with quality bread (Earth Sky Time!)

One of the added benefits of the winter version of the market (October until May) is that it’s held in J.K. Adams, source for beautiful hand-made hardwood cutting boards, bowls, and serving platters. You pass through the store on your way in and out of the market, and you’d be wise to spend some time there too. From May until October the market is held outdoors at H.N. Williams General Store.