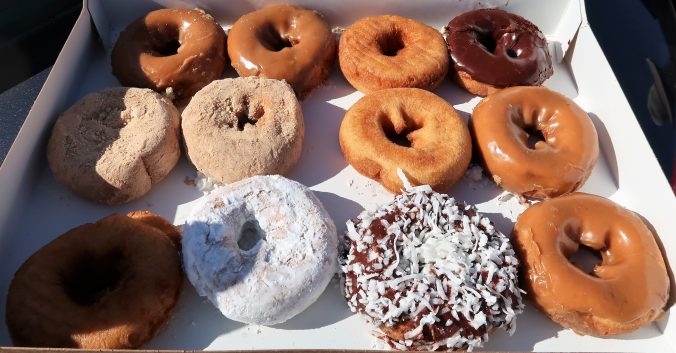 Buy 'em by the dozen and save big over the per donut price. Can't eat a dozen? Don't be silly, of course you can!

The Cider Mill has been an Endicott fixture for as long as we can remember (our local memories extend as far back as 1974). In fact, the current mill is a 1972 model constructed after a fire destroyed the original 1926 cider mill. Unlike most cider producers in apple growing country, The Cider Mill is not a farm; they do not grow apples. They buy New York State apples, primarily from Wayne County, for their cider, and also for selling fresh. 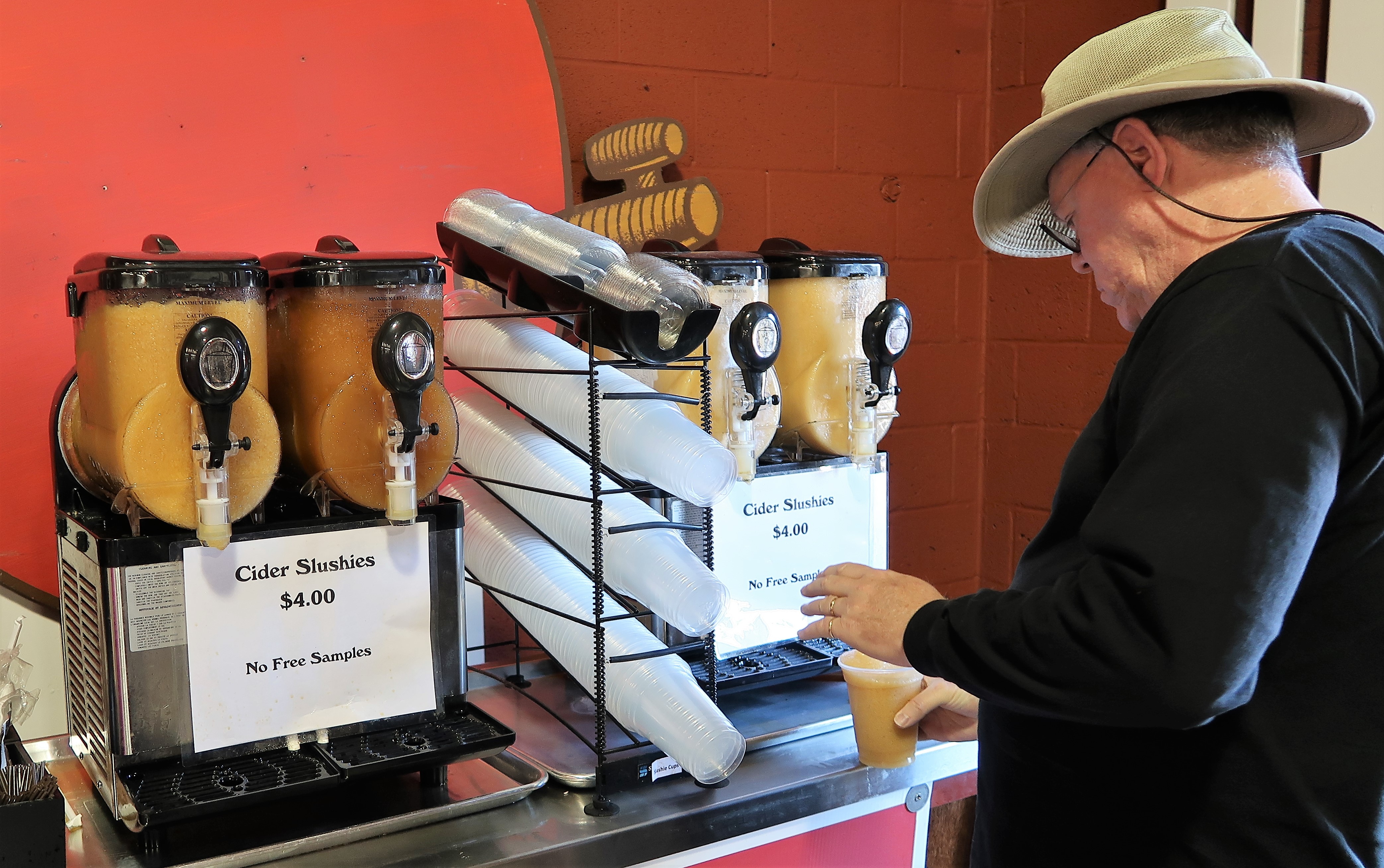 It does not seem possible that something can be more refreshing than a cup of cold cider, but here’s proof.

When you live near a cider mill, it’s fascinating and fun tasting the cider as it progresses through the apple season. The mix of apples is constantly changing, subject to what’s currently ripe and ready, and the resulting cider can run anywhere from pale and sweet to deep brown and spicy. We think the beverage improves as the later apples make it into the press. Know that at The Cider Mill they use UV pasteurization, which doesn’t require heating the juice at all. Uncooked cider simply tastes more alive. 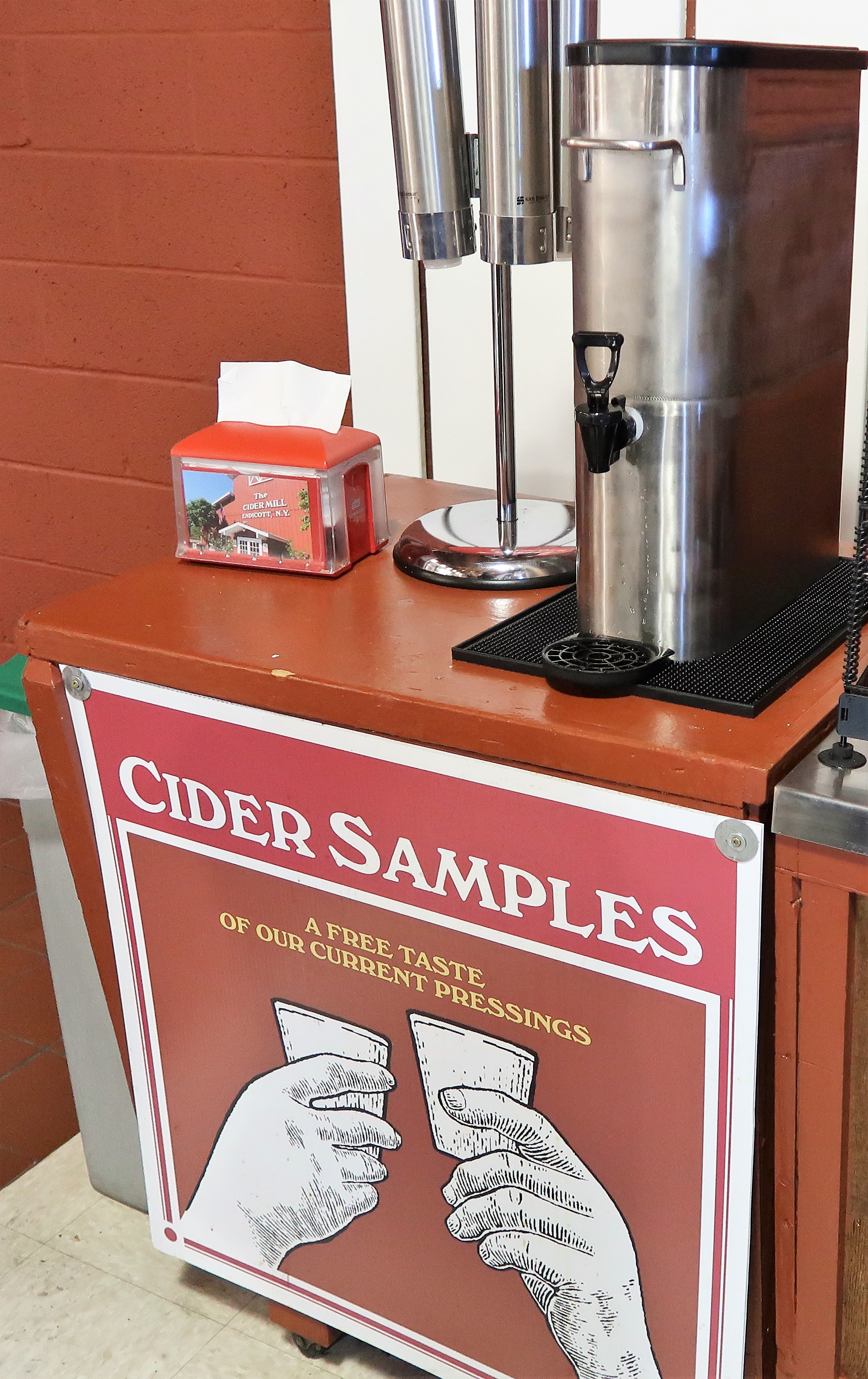 The Cider Mill recognizes that their cider changes through the season, and so they offer free samples for you to decide if the current mix is to your liking.

As far as we’re concerned, cider is the raison d’etre for The Cider Mill’s existence. Nothing says autumn like an icy jug of fresh-pressed juice to accompany a pair (or trio) of freshly made donuts. At one time, The Cider Mill made the three farm stand classics: plain, powdered sugar, and cinnamon sugar, and those remain the only three flavors available on weekends. Let us say that a warm-from-the-fryer plain donut is a thing to behold. 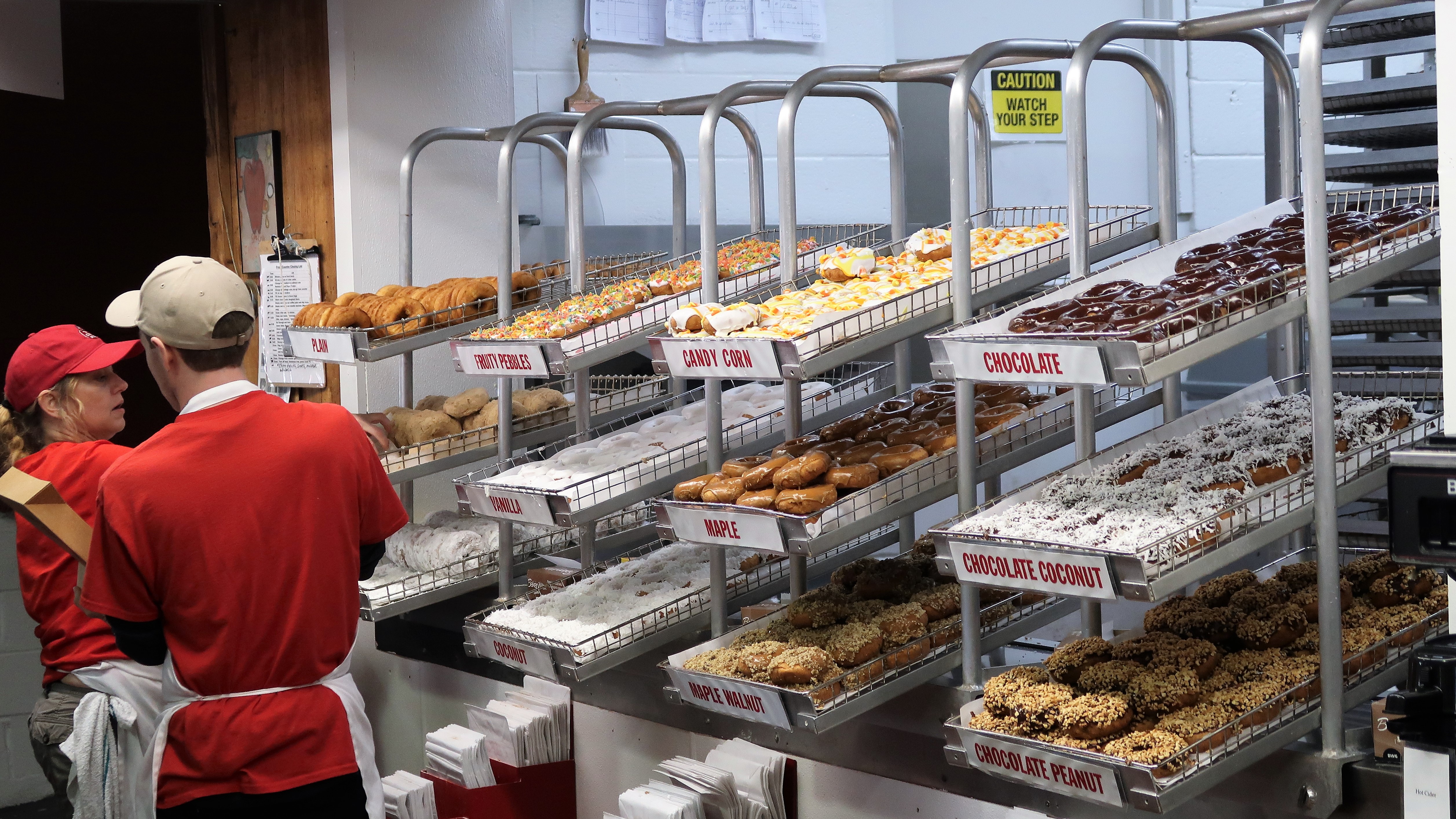 We like the iced donuts offered Mondays through Fridays but our favorites remain the cinnamon, plain, and powdered, in that order.

During the week, they get crazy with donuts, producing such flavors as candy corn and Fruity Pebbles. It’s such a big thing that the Mill is probably more popular for their donuts these days than for their cider and apples.  You can watch both being made through big windows – we especially enjoy watching the juice trickle from the ground up fruit as the press operates. 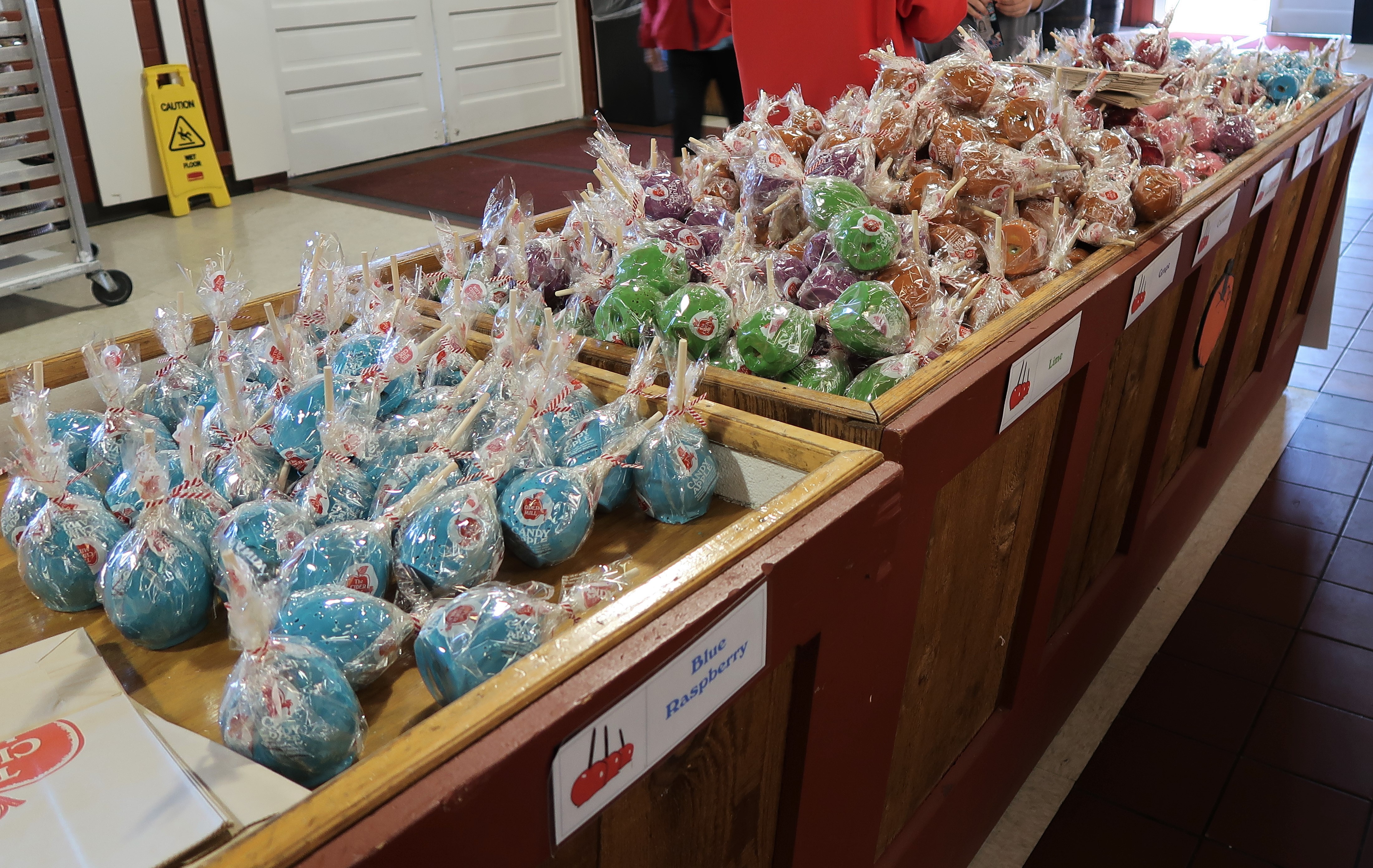 It wouldn’t be fall without piles of candy apples.

If you find yourself in the area some crisp fall afternoon, it’s worth a special detour to drive over. If it’s cold enough outside, you may even want to load your trunk with a few jugs of cider to bring home. Buy more than you think you’ll need, seeing as how much of it will probably be consumed before you reach your destination. 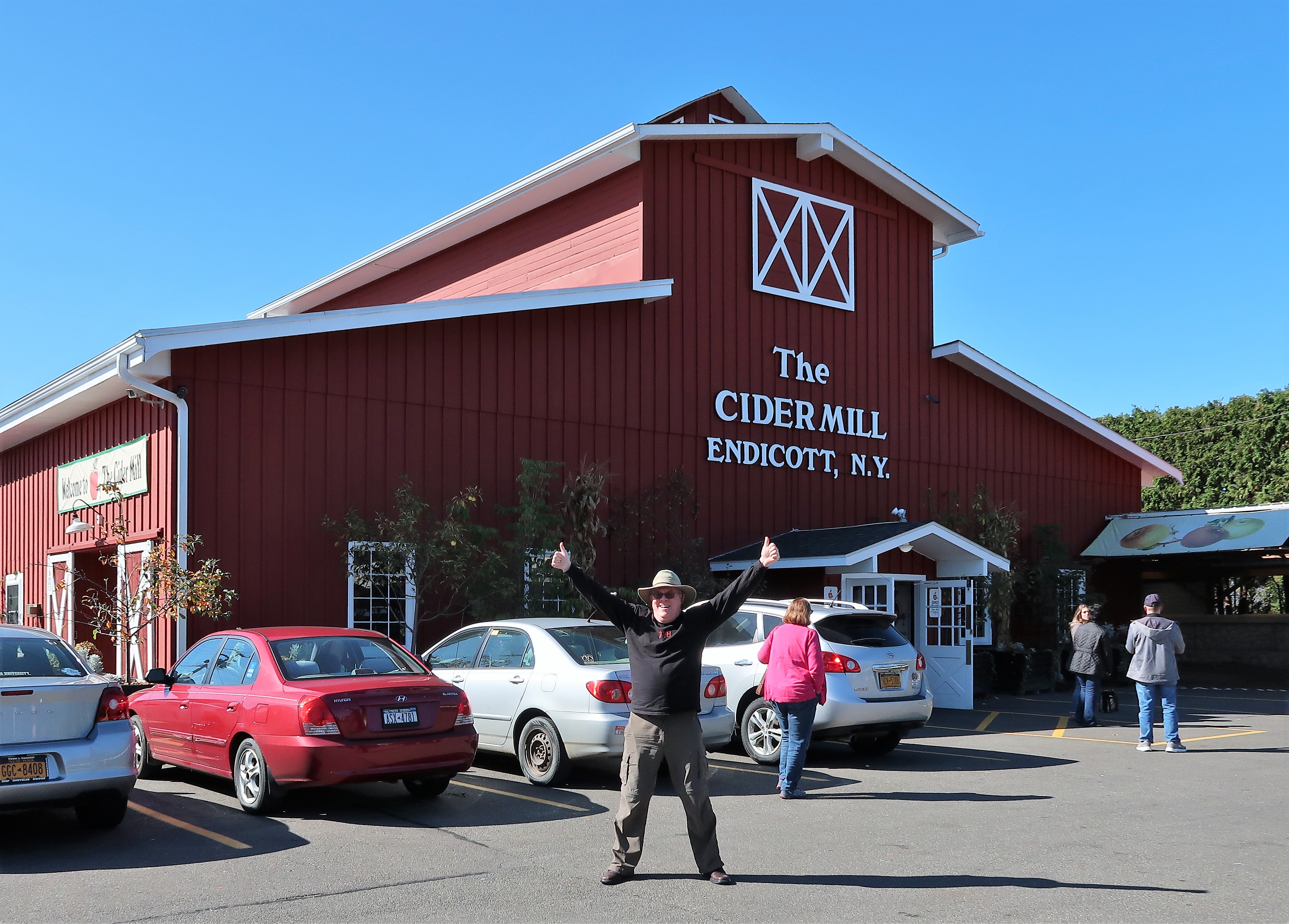 There’s been a cider mill at this location since 1926. At one time, you could bring your own apples to the mill to be pressed.

Checking in at: Sharkey’s, Binghamton NY