Cincinnati has a number of signature foods, but perhaps the most exotic and regionally focused of them is goetta. First things first: it’s pronounced as if the o wasn’t there, i.e., getta, and it has German roots. OK, so what is this goetta? It’s a sausage-like loaf of meat and oats that is sliced and fried in a pan, usually for breakfast. 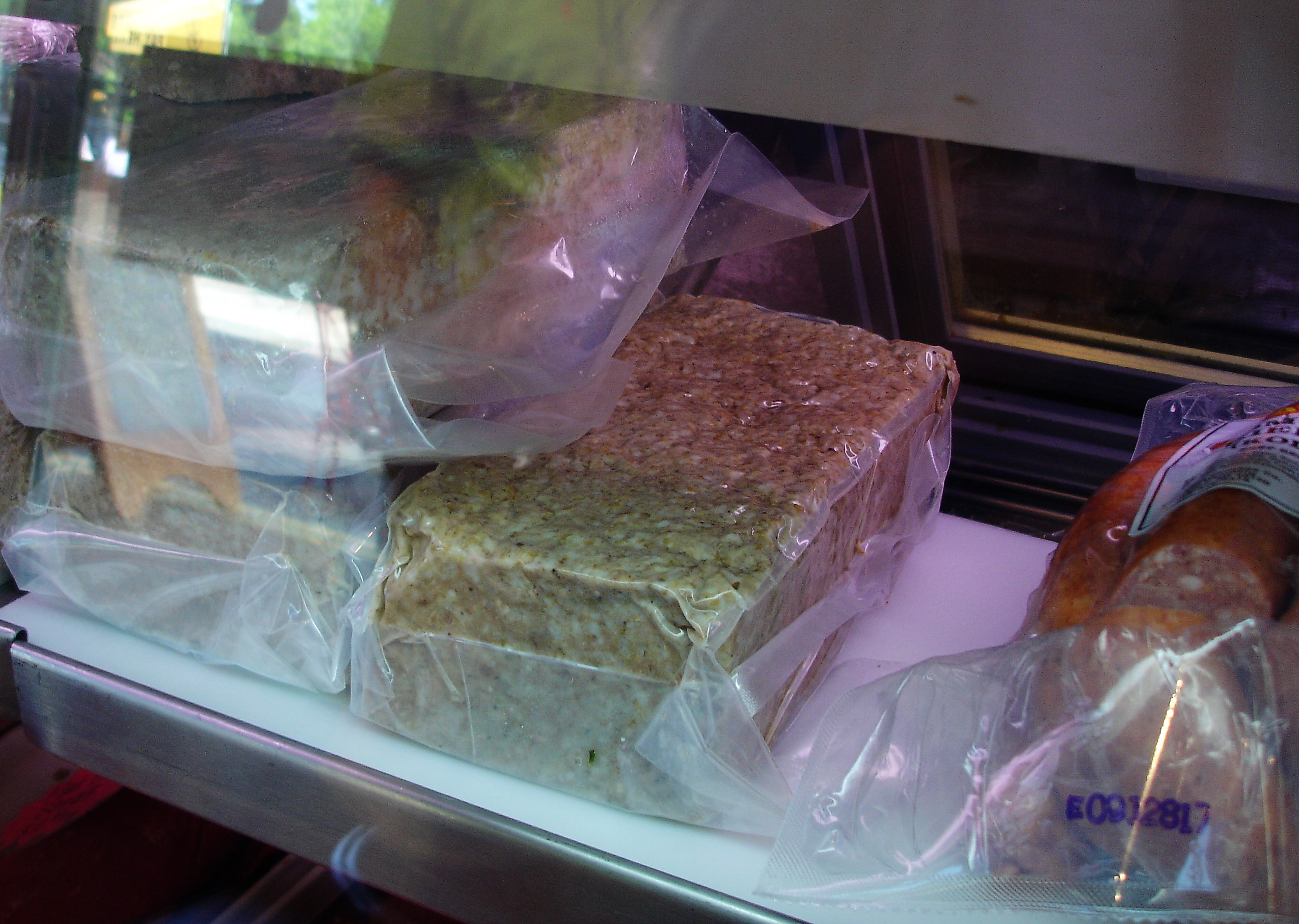 The meat and oat mixture congeals into sliceable loaves when chilled.

The meat used is generally pork, often with beef as well, and the oats are what most people know as Irish or steel-cut oats but, around here, are referred to as pinhead oats. The meat and oats are cooked with onions and seasonings for hours, then poured into loaf molds and chilled. The result is a congealed rectangular grayish block. It tastes far better than it sounds. 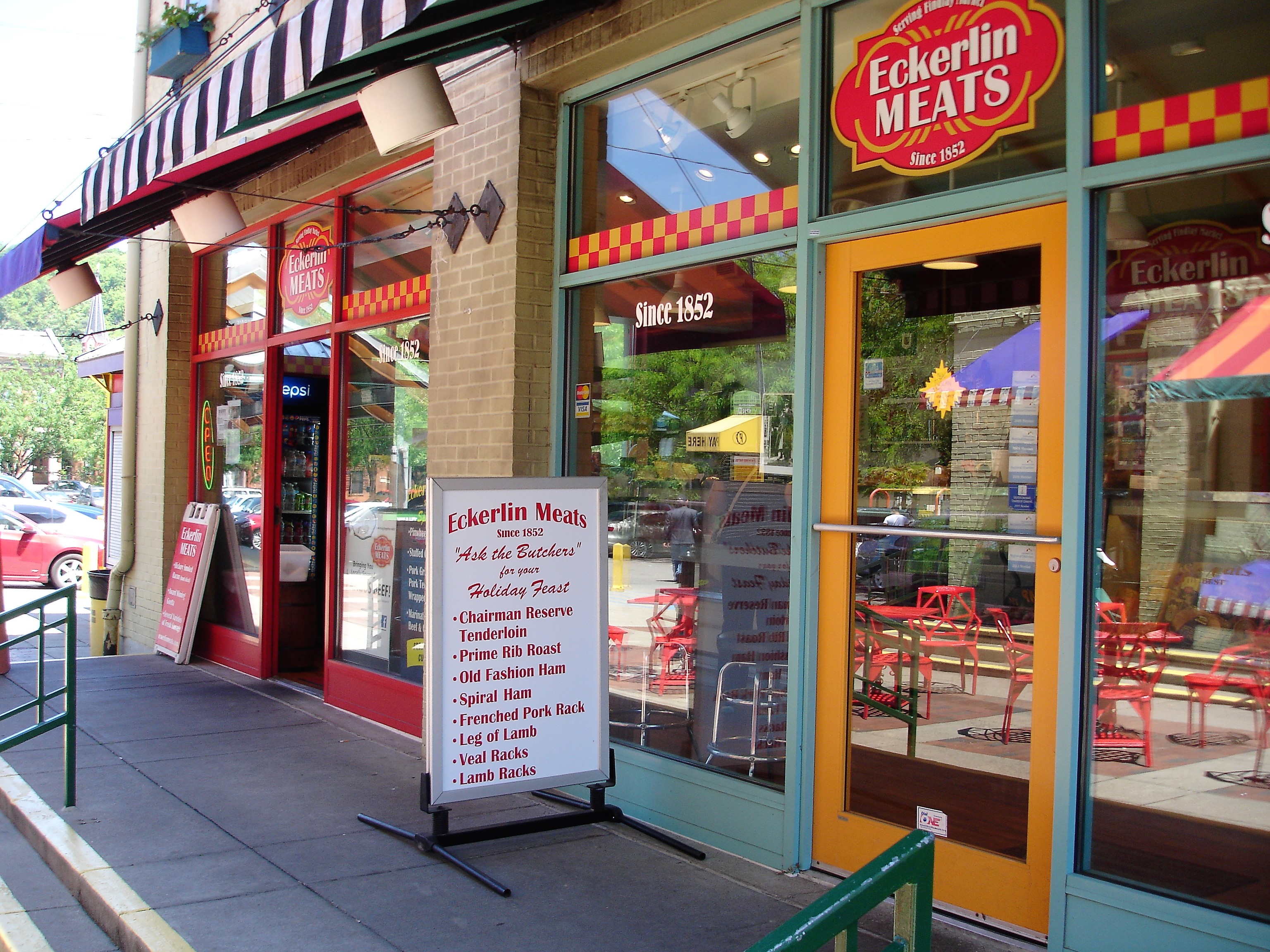 Eckerlin Meats may make the city’s best goetta, but they are also a full-service butcher.

It’s often compared to scrapple, a comparison of little use unless you are from the Philadelphia region. If you are familiar with scrapple, though, understand that there are two principal differences between goetta and scrapple: scrapple, which is almost always made from just pig parts, usually includes liver and other, less choice parts of the animal, which lends scrapple a decidedly funky flavor that is often partially obscured by the heavy use of sage.

The second major difference: scrapple is made using cornmeal. Between the fine cornmeal and the pig viscera, the resulting texture is very fine and almost gelatinous, even when cooked crisp on the outside. The flavor can be livery. We like scrapple but many people, even in Philadelphia, won’t go near the stuff. Goetta’s use of the cut oats helps give it a nubbly texture — much like in a bowl of cooked, steel-cut oatmeal, the individual oat pieces almost pop in the mouth.

We don’t know for sure if goetta producers use viscera in the product, but it sure doesn’t taste like it to us. Between the “meatier meat” and the nubbly oats, a slice of cooked goetta is easier to love, with none of the funkiness of scrapple. If you are in town, you definitely want to try some — there’s nothing scary here.

Most of the goetta produced is eaten for breakfast, but there are cased sausages stuffed with the goetta mixture, and we have heard of goetta sandwiches for lunch. There’s even an annual goetta festival, sponsored by the company that produces the vast majority of the world’s goetta, Glier’s (where you can sample goetta pizza, goetta donuts, goetta brownies, …!).

Glier’s goetta is good, but the real fun is in tasting the goetta made by local butchers. Some of the best we’ve ever had is hand-made by Eckerlin Meats in the bustling and fascinating Findlay Market. You can see big kettles of the mixture cooking away when you step inside Eckerlin, and the refrigerator case is loaded with great rectangular loaves of the sausage.

If you love old-fashioned butchers, Eckerlin, founded in 1852, will be a thrill. This is a full-service butcher — it’s not just about the goetta — and they’ll set you up with any sort of roast, chops, steaks, or store-made sausages you might fancy to cook that evening. On busy days, they have a lunch counter where many of their products are available hot off the grill although, we have to say, we’ve never seen the goetta available for lunch, which is a shame. Maybe they’ll cook you up a goetta sandwich if you ask nicely; we don’t know. If it works, tell us!

If you are staying in town for a while, and have access to a kitchen, you’ll want to bring some goetta home for breakfast, and maybe some hot metts (another Cincinnati favorite) as well for an on-the-fly barbecue. Eckerlin is also set up for shipping – check their website or give them a call for all the details.

best goetta in Cincinnatigoetta by mail