The Italy we encountered, from Rome north to Florence, is pretty much devoid of street food as we know it in urban America. Which is not to say that Italians don’t love to snack on the stroll, because they obviously do. They just don’t snack from street carts, and the menu is limited mostly to gelato and pizza, purchased from storefront shops and bakeries. There’s one notable exception to this pattern. 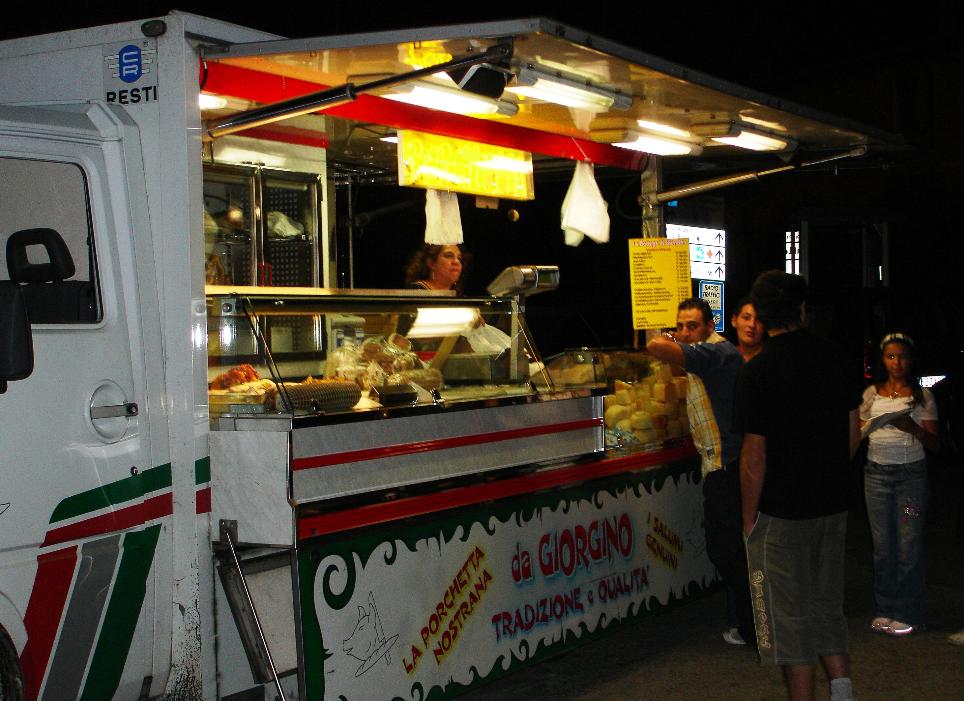 This was the only food truck we encountered in Italy, besides the standard (and overpriced) drinks/hot dogs/pizza trucks that cluster around popular tourist sites.

Just about any weekly town market will have a roasted meat truck on the premises. You can see rows of perfectly crisped and seasoned chickens turning on spits, crusty and herbed pork ribs, sticks of grilled meats, and porchettas ready for slicing by the etto. The meats are notable for their brittle crisp well-salted skins and juicy herbed interiors. Most customers purchase these goods for home consumption rather than for eating on the run, but vendors will cut things up for you if you’d like to dive right in.

We didn’t see these trucks anywhere but at the markets, but driving back one night from Siena we did encounter a porchetta truck named Da Giorgino parked in a lot next to a gas station, with a small crowd of local customers gathered around. The proprietor stood knife-in-hand before a cutting board with a large porchetta, slicing portions for take-away and creating sandwiches priced at three euros. The sandwiches were simply slices and chunks of pork on a very crusty roll. Condiments were neither available nor necessary, as porchetta comes with a built-in set of condiments.

Porchetta is a boneless rolled up cylinder of long-roasted pig, sometimes most of the animal, sometimes just a portion of it. The meat is quite fatty, and the fat develops a soft and almost creamy texture in the cooking, serving to lubricate the sandwich nicely. Porchetta has a crackling crisp exterior, and is heavily salted and herbed (rosemary being the principal herb). This crunchy, bacony skin adds to the variety of tastes and textures on the sandwich. You can guide the carver in his work if you like, asking for lean meat or extra skin, just as if you were at Katz’s deli in New York City.

Da Giorgino also sells all sorts of sliced deli meats and local cheeses, by the kilo, and this is how most of the customers made their purchases. The concept seems odd to us: stopping by a deli truck at a gas station at night for some prosciutto and pecorino, but here it is. We don’t know if this truck is here every night, or just certain nights, or even if this was a one shot deal at this location. But it might be worth a try if you’re in the area.