Before we’d ever been to Maine, lobster, to us, was rich man’s food found in white tablecloth restaurants. The first few times we went to a Maine lobster pound we laughed at the incongruity of the single-serving bag of potato chips that always accompanies the cooked critter. After dozens of lobster-in-the-rough meals (lobster-in-the-rough being the Maine term for ultra-casual lobster restaurants served out-of-doors, usually at picnic tables near the shore) we now find it impossible to enjoy Homaris americanus anywhere south of the New England-New York border, and certainly not anywhere we wouldn’t feel comfortable wearing shorts and sandals. 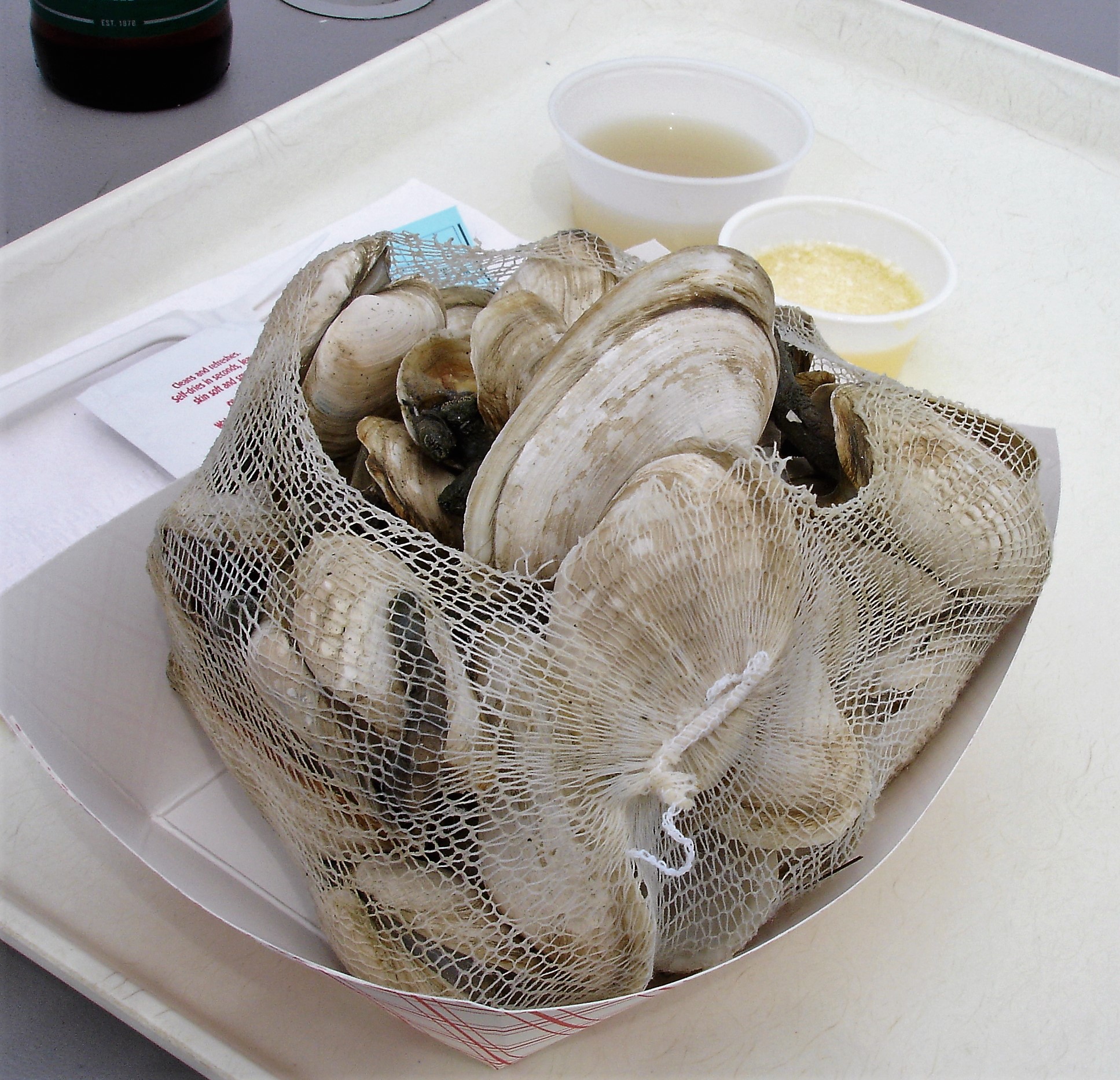 Abbott’s consistently serves the sweetest and most grit-free steamers we’ve ever tried.

Maine is a long way from home for us. Which is one reason Abbott’s Lobster in the Rough, on the eastern Connecticut shore, has been a favorite of ours for decades. Another reason: the lobsters are damn good, and the setting by the water is perfect. 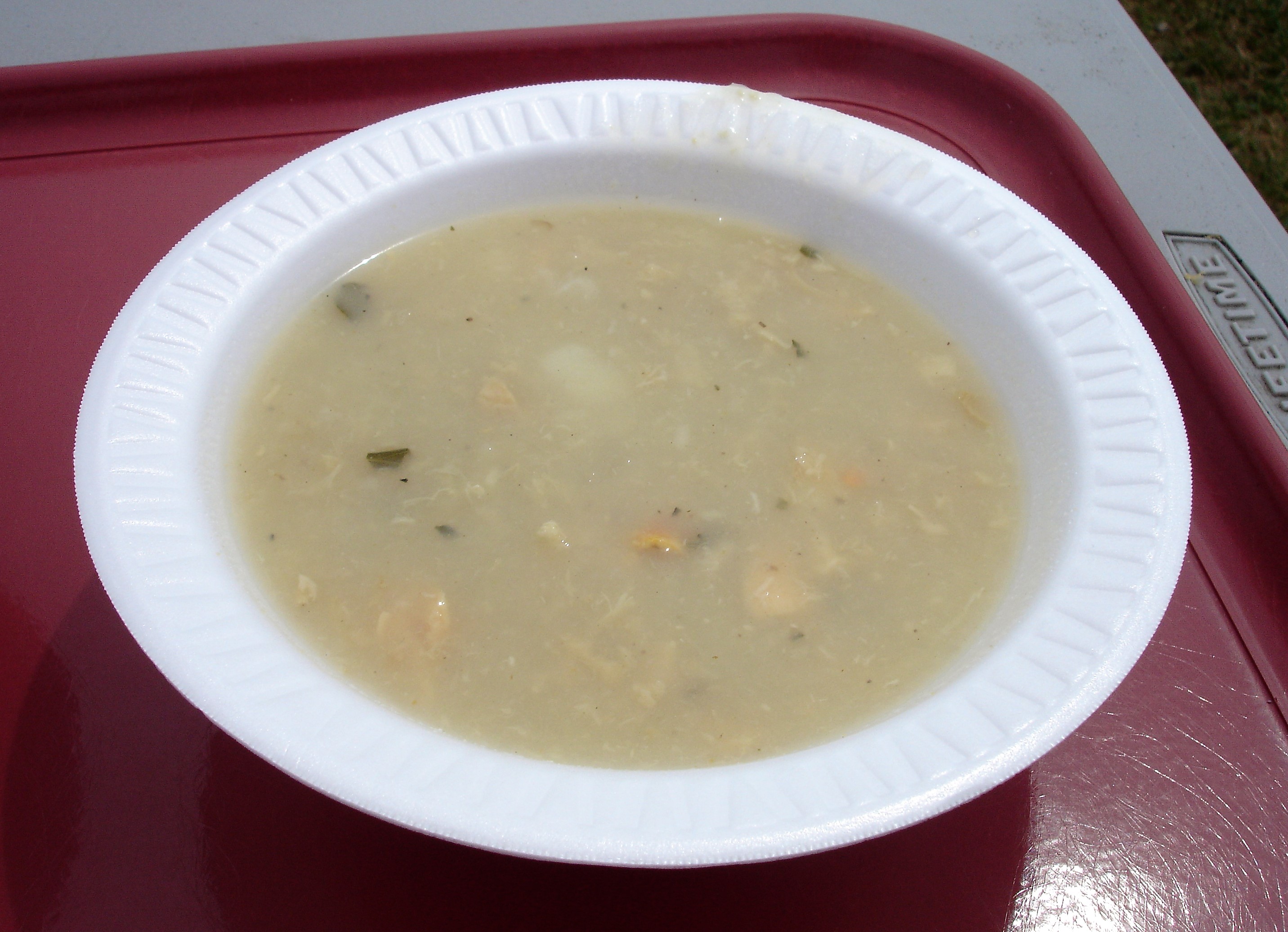 Abbott’s clear clam chowder is a clam-lover’s fantasy, loaded with the flavor of clams, and dotted with little cubes of potato and bits of clam.

We began our love affair with Abbott’s through their hot lobster roll. A hot lobster roll is simply fresh, warm lobster on a butter-toasted, top-loading hot dog bun, either dressed generously with melted butter or with the butter on the side. Abbott’s roll, although built on a round bun, used to be one of the finest. Over the years it lost some of its sparkle as they began packing bagged meat into forms to keep up with the crowds, and the result was dry and dull-tasting lobster rolls. This sent us looking elsewhere on the menu. 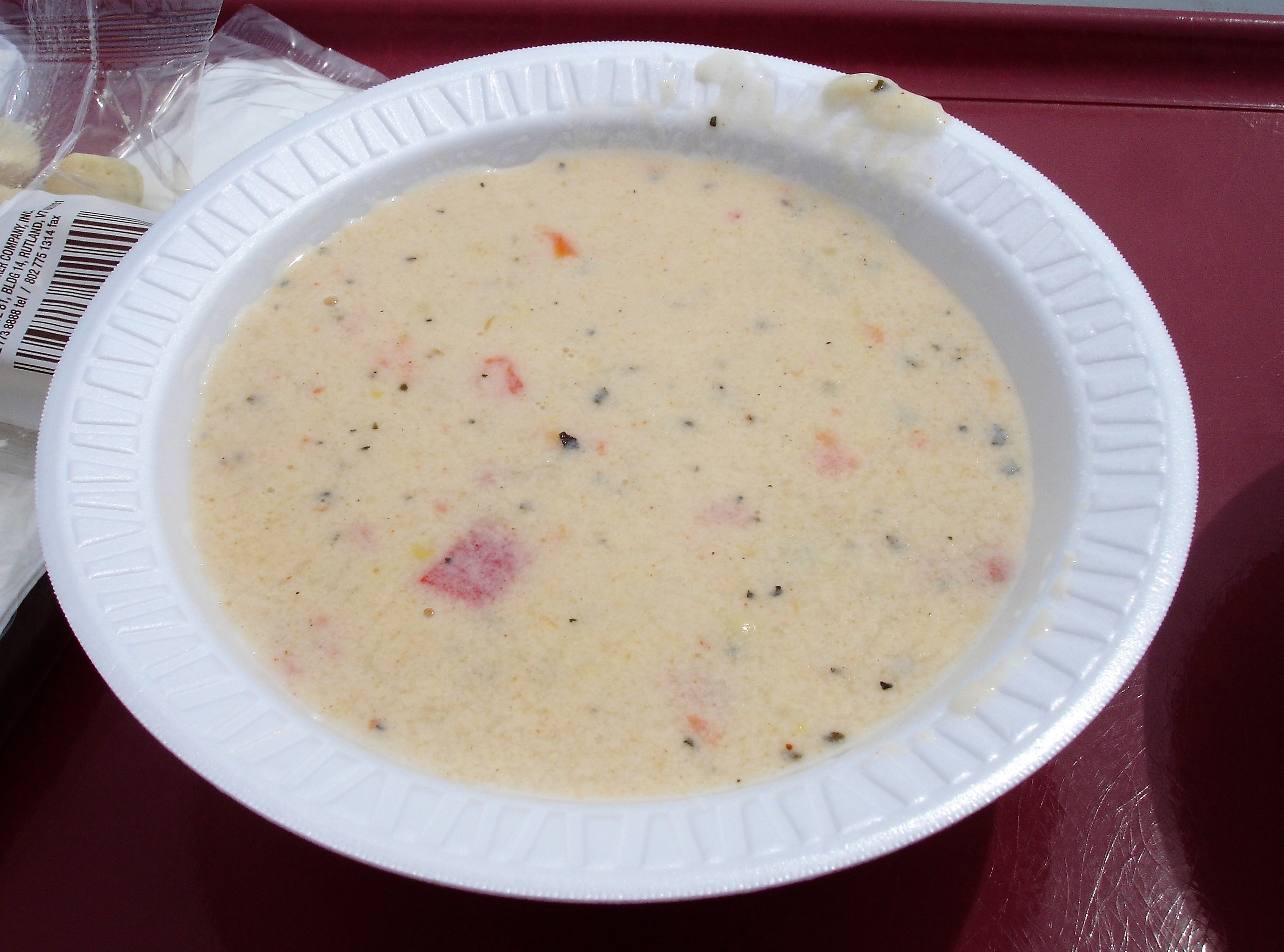 Shrimp & Roasted Corn Chowder, one of Sue’s favorites, is totally different from the clam chowder in flavor. The sweetness of corn and cream stand out.

We moved to whole lobsters, and they are spectacular. There was a time when the lobsters came from the waters off the Noank coast – you used to see the floats of lobster pots in the water – but those days are gone. Nonetheless, the live lobsters they bring in from Canada are wonderful. Not only that, they always have extra-large lobsters around, which is what we get (we usually split a 3-4 pound or 4-5 pound lobster but they go as high as ten pounds). 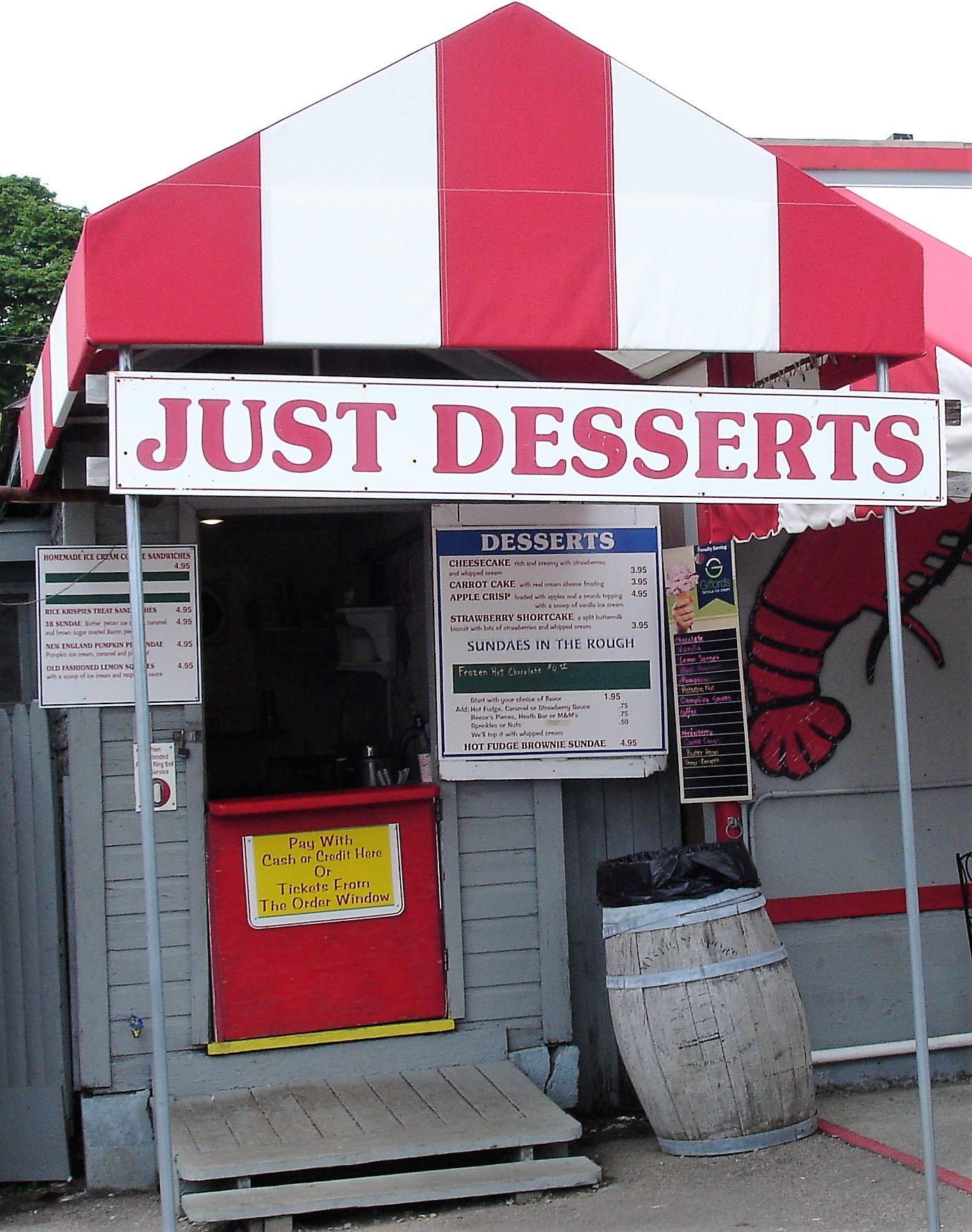 There’s a separate counter for dessert, and the offerings sound great, but we never have any appetite remaining to sample them.

The lobsters are presented intact, but with the shell cracked in all the strategic places so that a lobster cracker is unnecessary. Cups of melted butter come alongside, as does a little cup of good slaw and the requisite bag of chips (if two of you are splitting a large lobster they’ll double up the slaw, butter, and chips). From the tender claws to the sweet knuckles back to the chewy tail, it’s all lobster perfection. 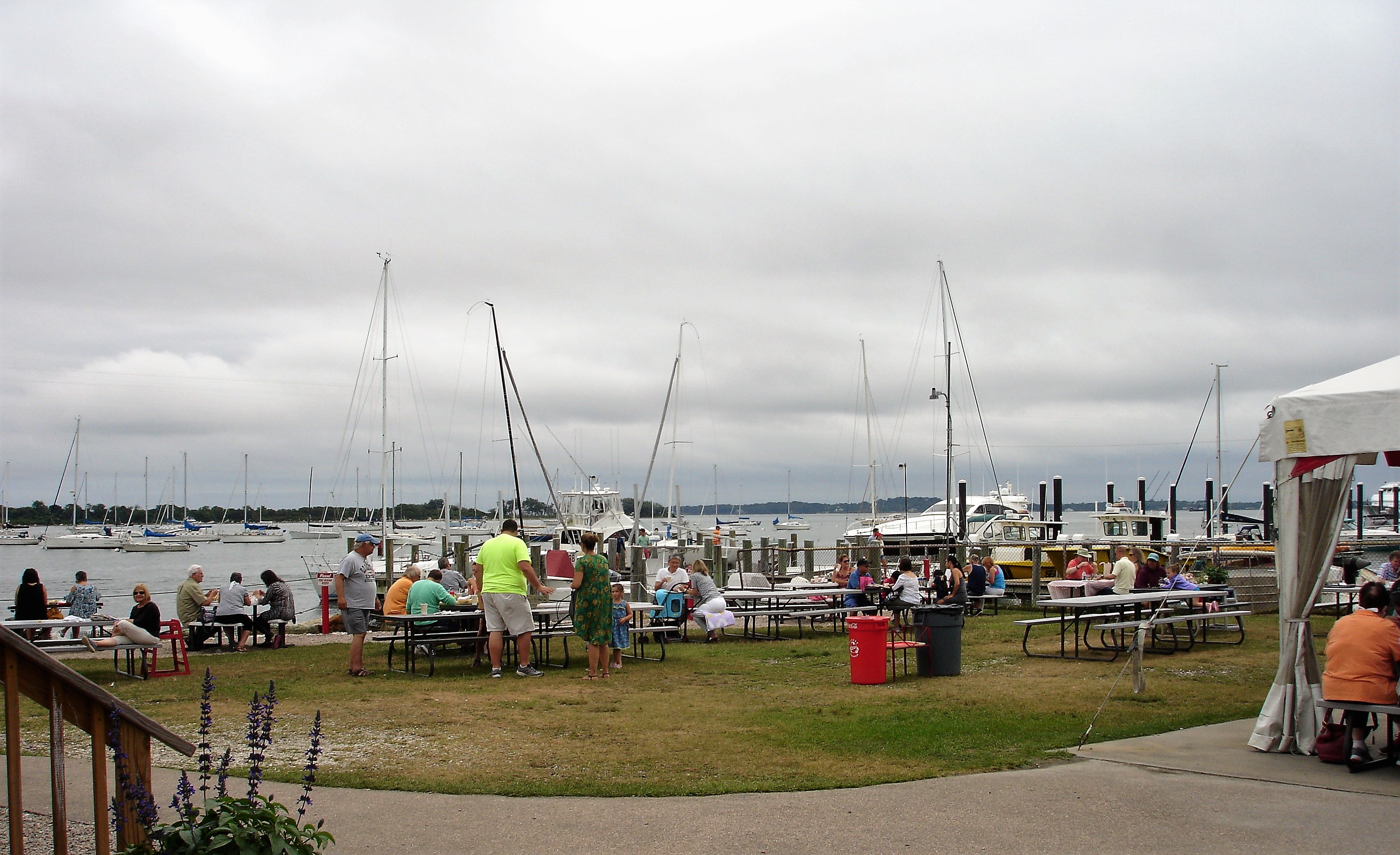 A note about lobsters: when lobsters grow, they shed their shells and grow new, larger ones. It takes a while for that shell to harden. Until then, the lobsters are called soft-shell. Some people claim to prefer soft-shell lobsters. We most definitely do not. The main advantage of soft-shells is that you can tear apart the cooked lobster with just your hands. The disadvantages? The meat is wan-tasting and watery. Also, the new shell is much larger than the lobster inside – the lobster needs room to grow before shedding this new shell. That means all that empty space is filled with water. You get less meat for your money. We’ve received soft-shells at Abbott’s on occasion so now we specify that we want hard-shells when we place our orders. This last time, however, when the woman taking our orders asked in the back, we heard someone say they only carry hard-shells. If that’s true, good for them but it’s a newish policy. Just so you know. 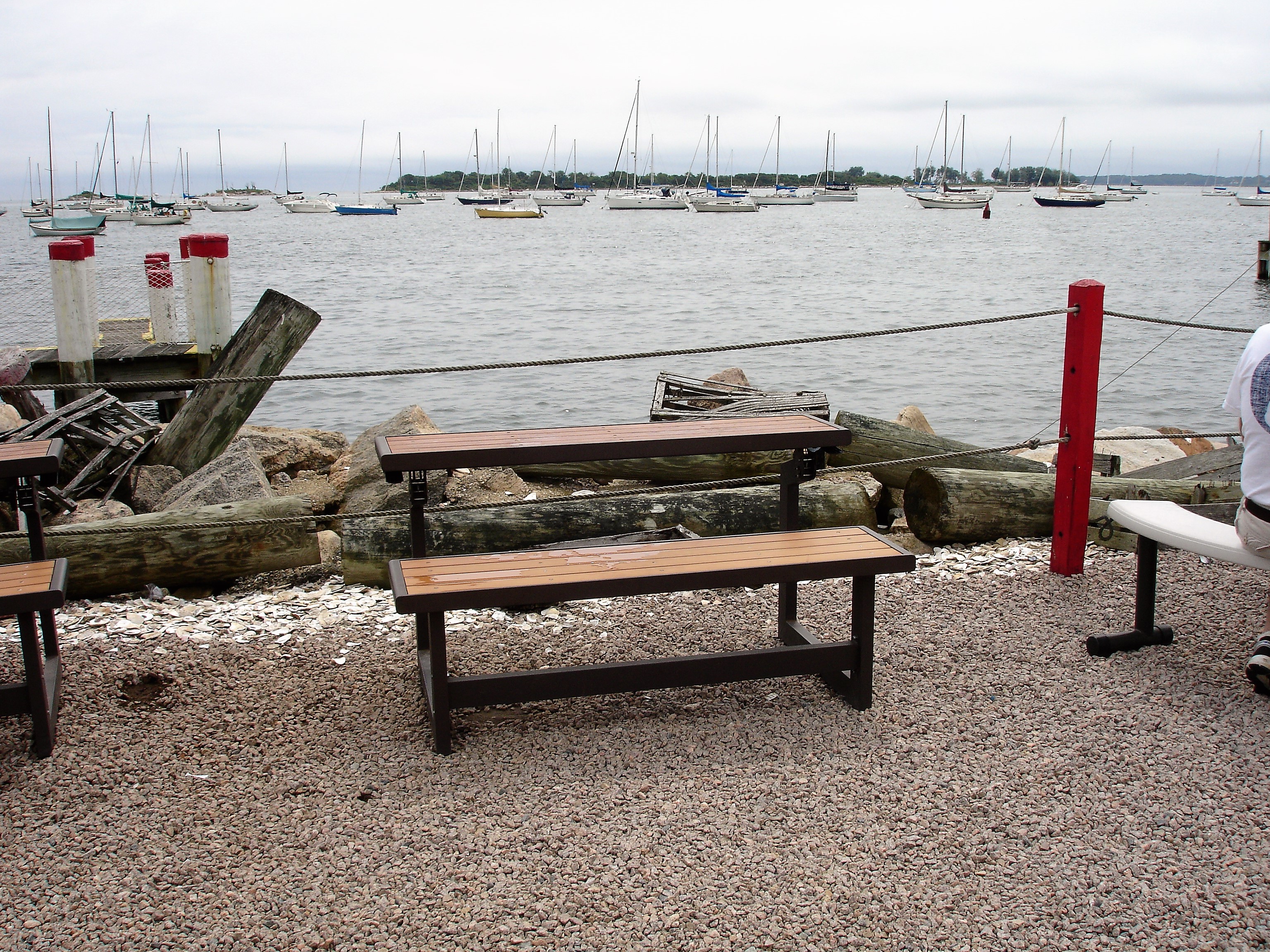 A new feature at Abbott’s, and a great idea: one-sided picnic tables for couples to dine with a view of the water.

Why not go full-bore? Begin with a bowl of clam chowder. They do have creamy chowder on the menu but what you want to ask for is the clear, Rhode-Island style soup. This is a murky broth of intense clammitude with plenty of pieces of clam and potato. It’s found all over the shoreline around eastern Connecticut and Rhode Island but Abbott’s is easily the best we’ve had. 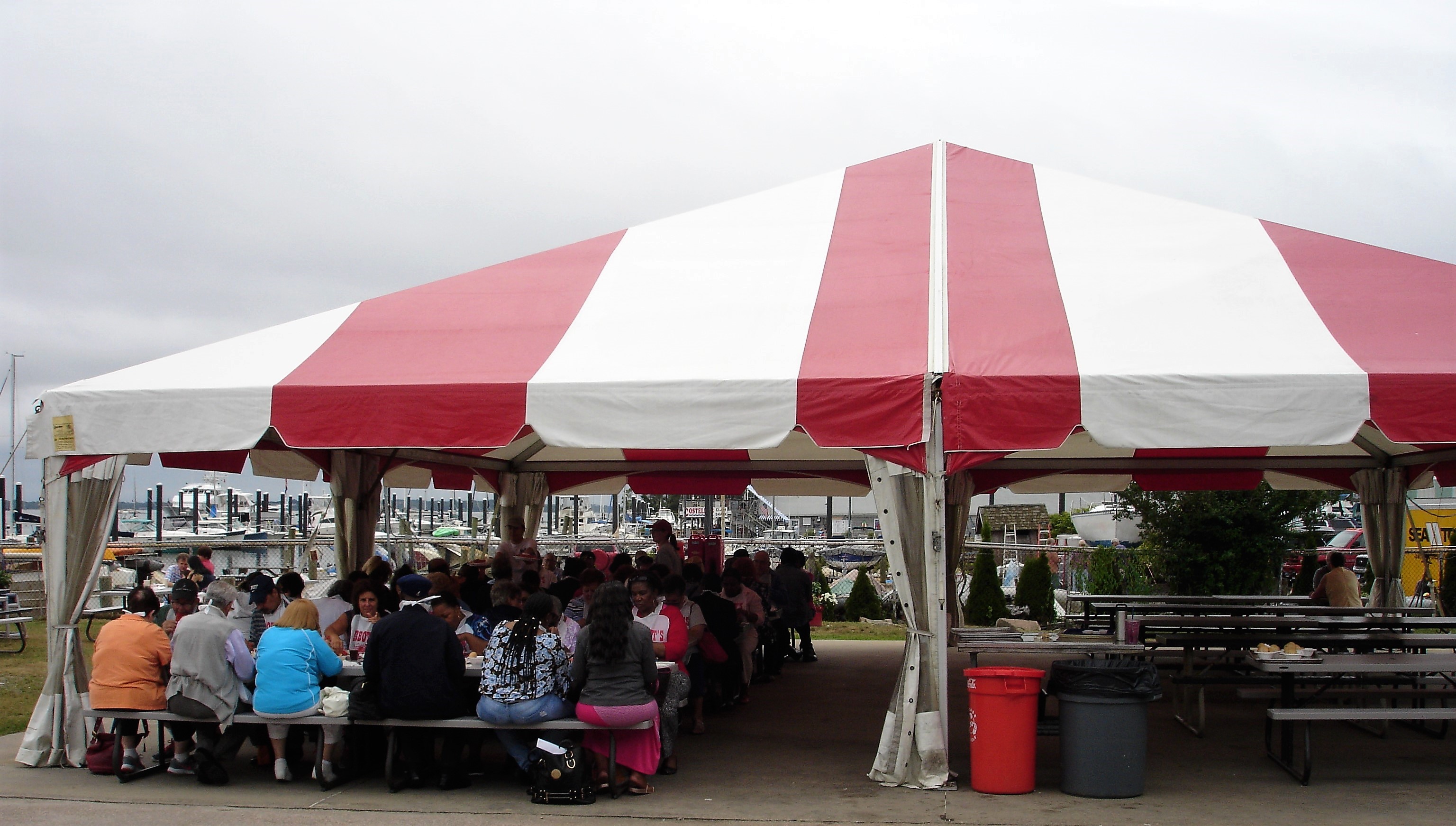 There is covered dining, if you insist…

After your chowder, move on to a net full of steamers with hot broth and butter. You know steamers? They are clams with an ugly, protruding “neck” covered in a black, wrinkly skin. To eat them, you pull them from the shell, slide off the neck skin, grasp them by that neck and rinse them in hot broth, dip them in melted butter, and pop ’em in your mouth. These clams are farmed, pristine and grit-free and, again, they are the finest tasting steamers we’ve ever enjoyed. Beyond chowder and clams and lobsters, it’s up to you. We’ve sampled most of the menu (at least, until they expanded the offerings the last few years with things like pasta and chicken), and the cold lobster rolls, crab rolls, deviled eggs, stuffed clams, and even the hot dog, are quite good. 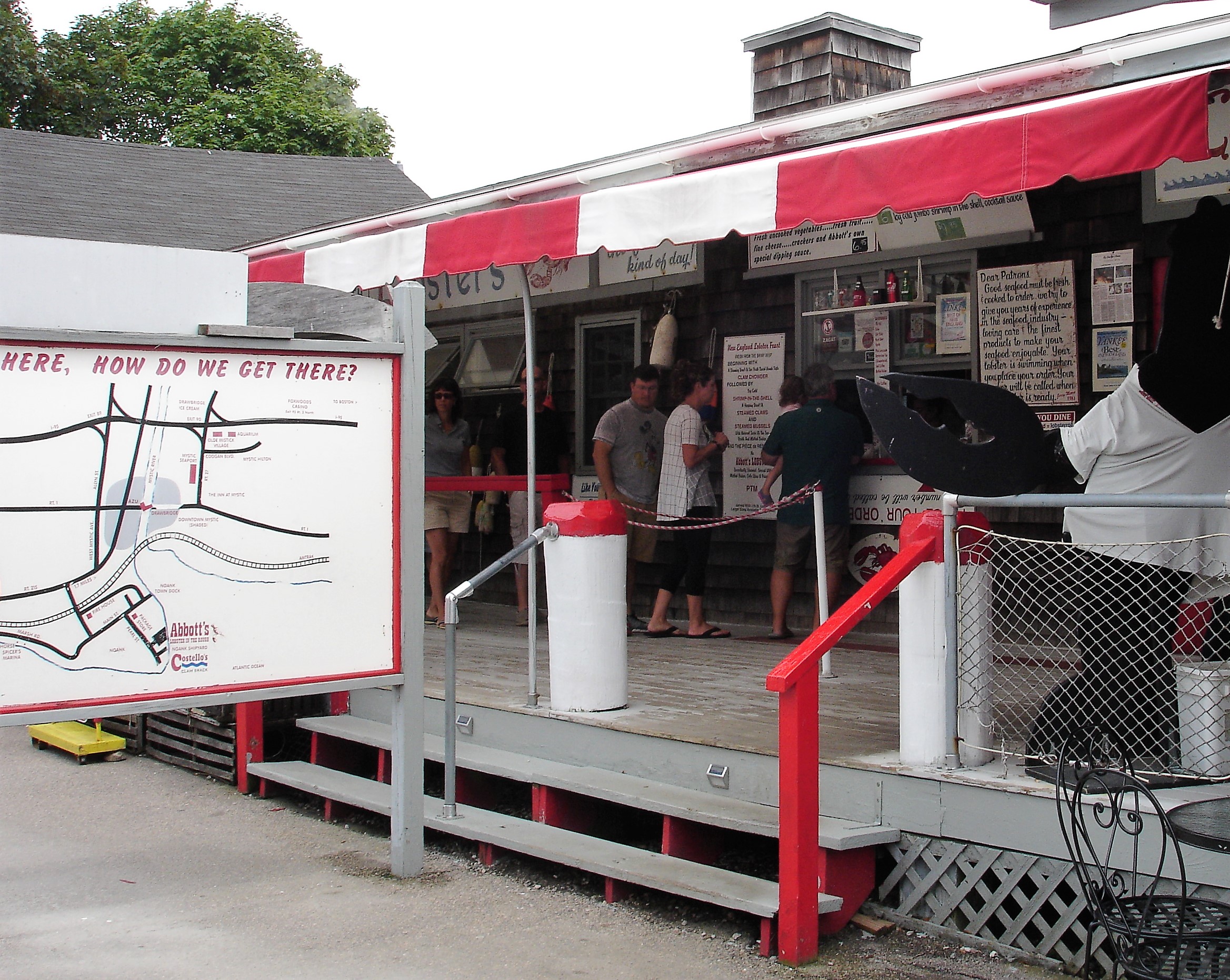 Place your order at the counter. You’ll be given tickets. One of them can be used to pick up things like chowder and drinks immediately. Then wait for your number to be called for things like steamers and lobsters.

What about the hot lobster roll? There are two things to know. The regular roll contains four ounces of meat, but they now offer rolls with seven ounces, and 16 ounces of lobster (that last one for about $50, last we checked). Also, as we ate our last lobster in 2017 we noticed on another tray what looked like hot lobster rolls on hot dog buns, with loosely packed claw meat! Have they changed their lobster rolls? We don’t know but we hope to investigate further.

Amazingly, for this beautiful summer Sunday, the line to place an order was not long. Generally, you can expect a VERY long line. The best approach, we’ve found, is to plan to arrive when they open, at 1130A.

Abbott’s is the closest thing to a real Maine shoreline lobster pound between New York City and the southern coast of Maine. We urge you to pay them a visit when you can – shorts and sandals are fine! They open for weekends only in early May, switch to a daily schedule from Memorial Day until Labor Day, and continue weekends only until early October. Note also: there’s always a coupon on their website that’ll entitle everyone in your party to a free bowl of clear chowder. The coupon is only good Monday through Thursday. Note further: Beer is the ideal accompaniment to an Abbott’s meal. Abbott’s sells no alcoholic beverages. Easy solution: On your way to Abbott’s, hit the Universal Package Store up the street, at 19 Pearl Street, for a cold 6-pack. They even carry local brews, if you’re interested. 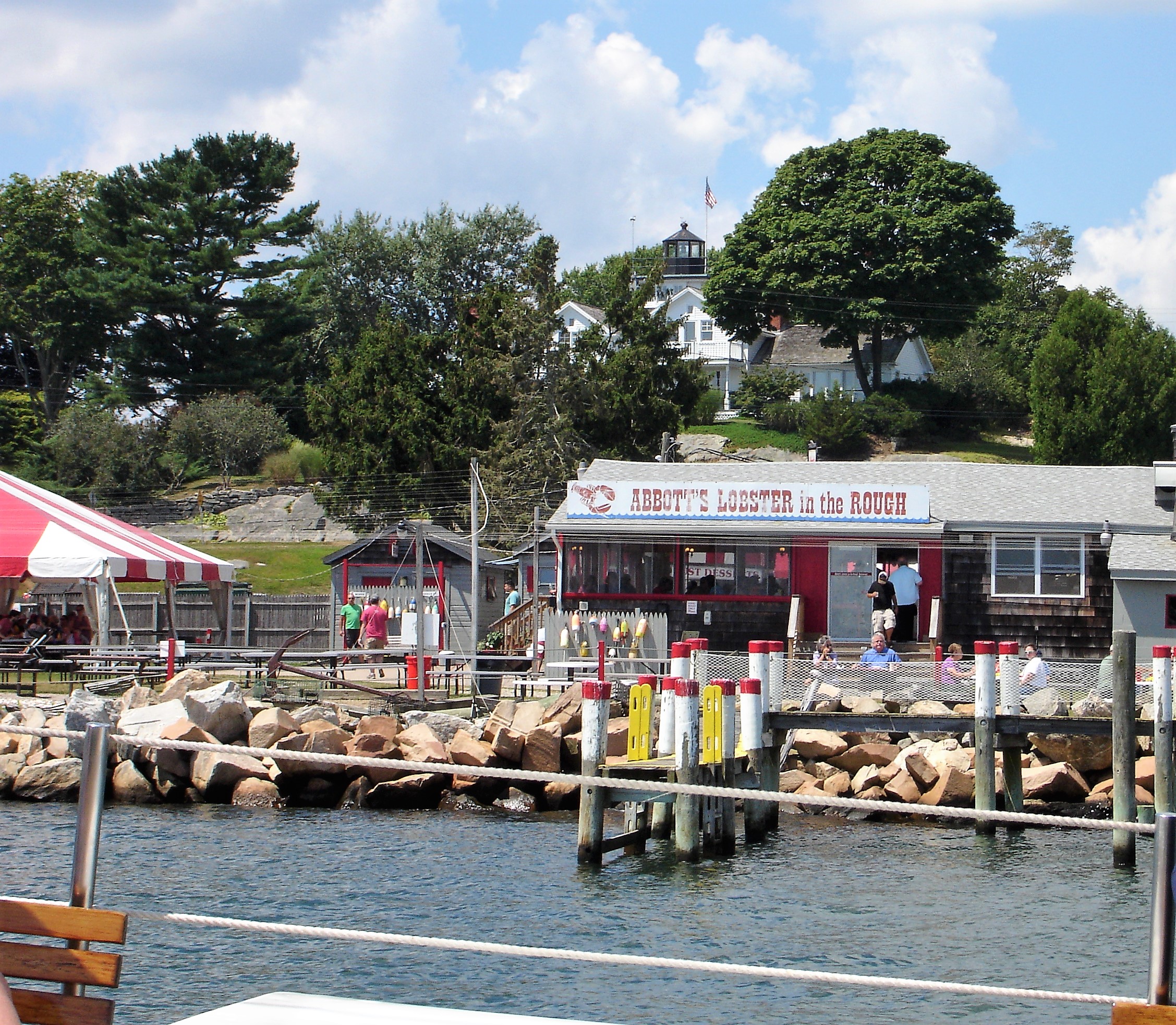 A view from the water as we passed by while sailing. They do have facilities for arriving by water.