Original Milk snow topped with egg pudding, mango, and condensed milk. The toppings menu is wide-ranging, from marshmallows and chocolate sauce to lychee jelly, sweet corn, and even ice cream.

Taiwanese snow can be placed between shaved ice and ice cream in that there is dairy in it, but it’s low-fat milk, not cream. The milk, water, and flavorings are frozen together in a block and then shaved with a machine for serving. We understand there are also non-dairy versions of snow, made with soy milk, or with non-dairy creamer. And there are powders available for flavoring the blocks, although the best purveyors use the real thing, whether it’s strawberries or taro or green tea. 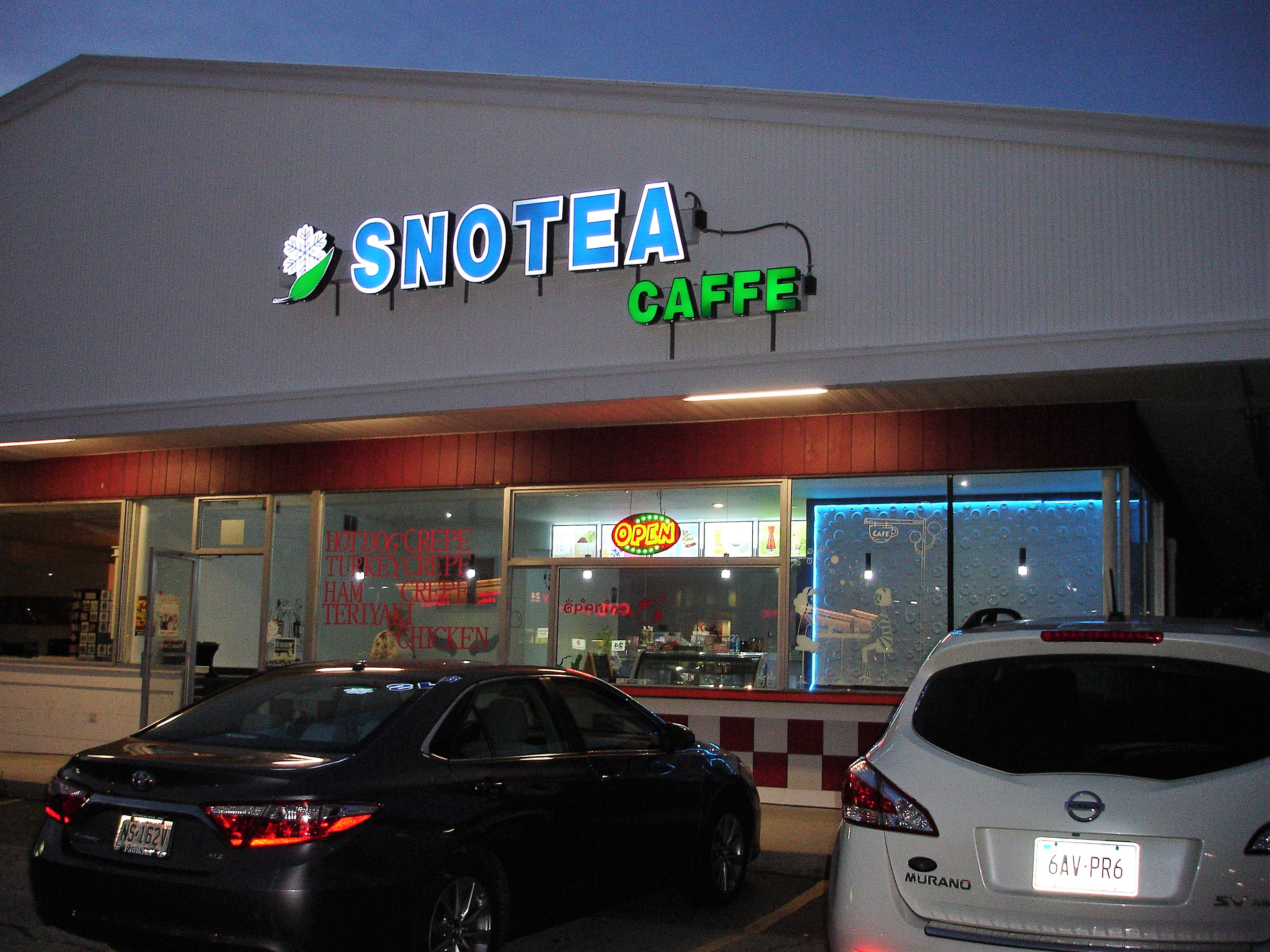 We arrived at Snotea Caffe in Groton, CT not long before closing one evening to find the place deserted. There was a faint aroma in the air of what we can only describe as, excuse us, urinal cakes (presumably, we were picking up the scent of an early cleaning). We were not encouraged.

Our snow orders were prepared out of sight, unfortunately – we’d hoped to see the shaving in action. Things immediately started looking up when we received our bowls of snow – they were beautiful! They were also massive, arriving in great billowing ribbons of milky ice. We ate outside leaning against our car, though there is limited seating in Snotea.

One of us ordered strawberry snow; the other enjoyed Original Milk snow, topped with mango, egg pudding, and condensed milk. Those were actually some of the more familiar choices. Found among the more mundane items on the toppings roster are things like aloe vera, grass jelly, boba (the “bubbles” in bubble tea), and mochi. Believe it or not, you can even have your snow topped with ice cream!

We have no idea where Snotea fits in the pecking order of American Taiwanese snow shops but, to our newbie taste buds and eyes, it seemed like they use the real thing. The strawberry snow was studded with pieces of strawberry, and there was nothing artificial about the flavor. We found it to be super-refreshing, lighter than ice cream but clearly richer than shave ice. What they call original milk seems, to our tongues, to have something of a mild cooked milk taste which is quite pleasant. Egg pudding is a baked egg custard, like what you might find in a custard pie, but thicker. The custard is cubed. Sweetened condensed milk makes a superb topping for the lightly sweetened snow.

As their name indicates, Snotea also specializes in tea of all kinds, hot or cold, bubbles or not, with or without milk. The menu also features something called jelly ice, of which we haven’t a clue other than the menu photo, which makes it appear to be a colorful, liquidy Jell-O mold. Smoothies, yogurts, mochi ice cream, macarons, and crepes round out the menu. One of those crepes? Hot dog! Go figure.