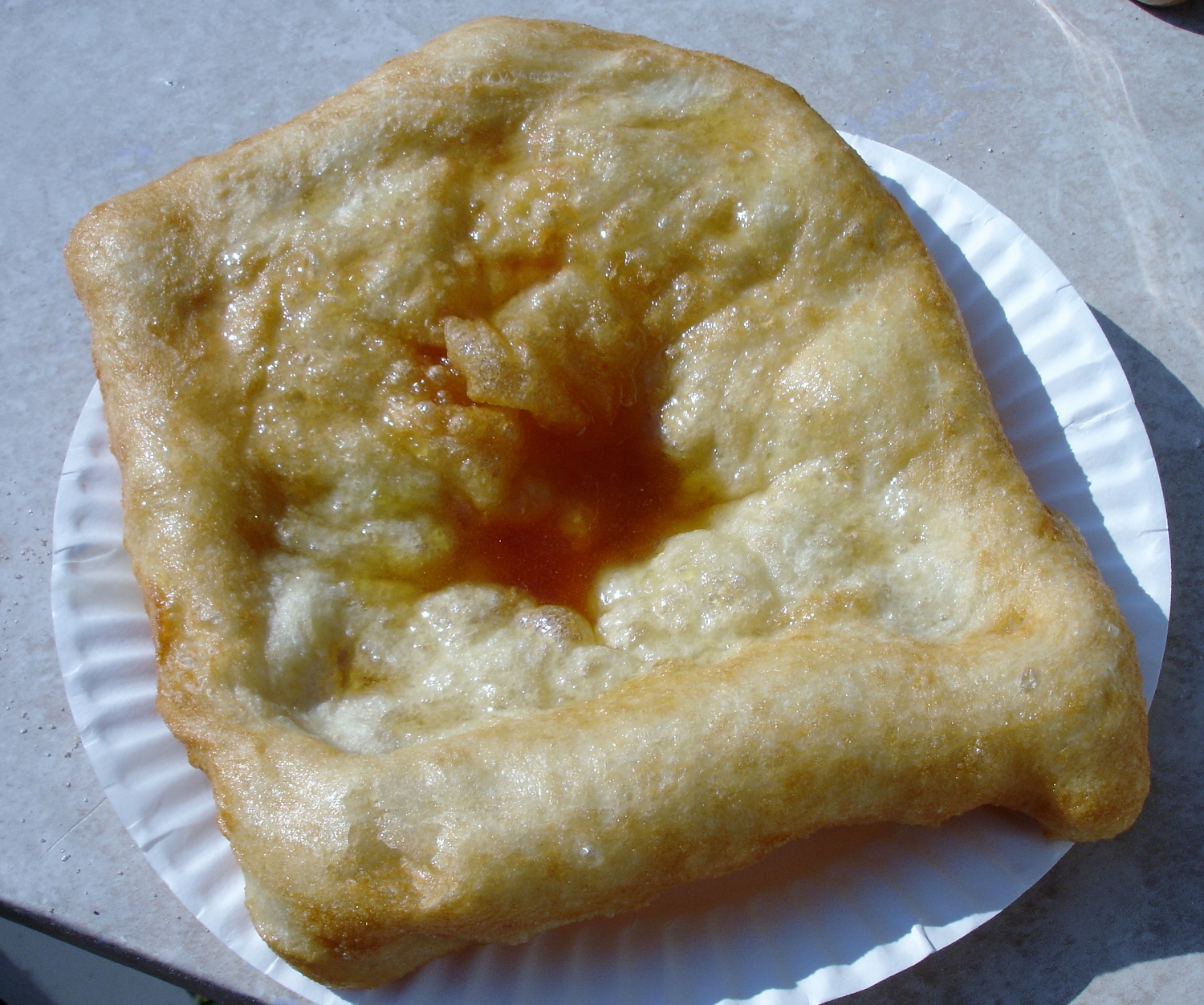 Fried dough of some sort is found in fairs and carnivals across America and around the world, but New England is pretty much the only place where it is called, with true New England poesy, “fried dough.” Here it is topped with butter and maple syrup.

The fair is put on by the Rutland County Agricultural Society, a large nonprofit group of local farm industry folk. Unfortunately, over the last year the fair has been buffeted by a steady stream of bad news: the fair has been running a large deficit, the IRS has put a lien on the property for unpaid taxes, the president/fair manager has been dismissed, he, in turn, is suing the fair, his successor quit soon after, noting stacks of unpaid bills and unanswered correspondence, contracts with vendors were canceled at the last minute, the fair owes the city thousands of dollars, … Amid all the negative publicity some people had doubts the fair would even be held this year.

A bargain lobster roll from one of the fair vendors could have been worse. OK for fair food.

The fair was held, but attendance was off. A lot. The weekday we were there it felt as if the fair was put on for us alone! It was a very eerie feeling. We spoke with vendor after vendor who confided in us about what a disaster financially this year’s fair has been for them. There was more gallows humor than bitterness. 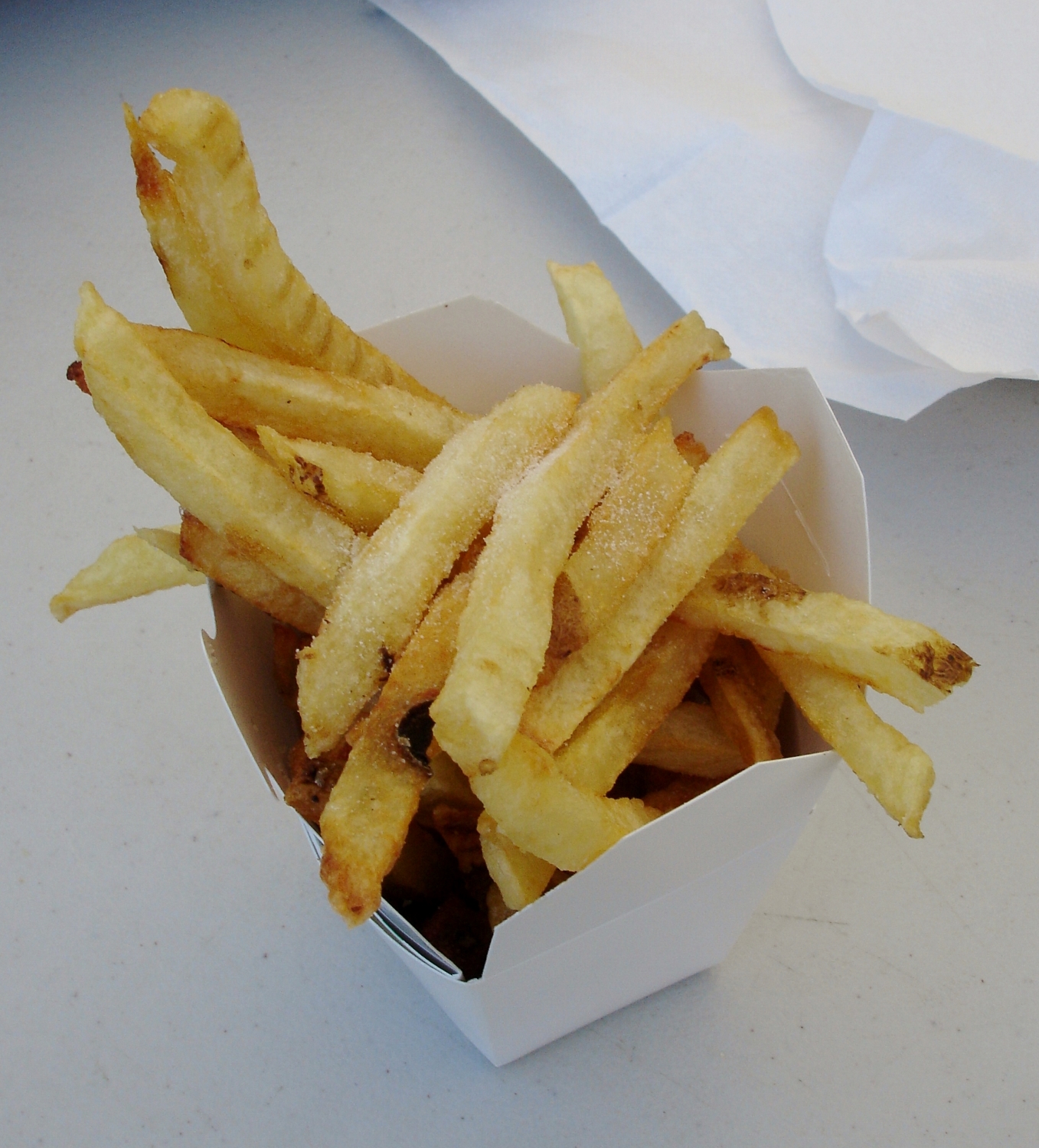 Roxie’s fries are the most “famous” thing to eat at the fair. Roxie’s is much loved around here, and the stand is open in the warmer months even when the fair is not being held.

So how was the fair? We’ve been to many state fairs, and we’re big fair fans. We have to say that Vermont’s fair is fairly generic, with a relative paucity of distinctive elements and interesting things to eat. While they’ve had the likes of Loretta Lynn, Buck Owens, and Roy Rogers and Dale Evans in past years, this year’s entertainment lineup was very weak. In fact, that was one of the biggest complaints we heard from the vendors, because the big acts bring in crowds. The day we were there the big entertainment was to be harness racing. As we arrived, we learned the racing was canceled. Nonetheless, we did find some good eats, and the most interesting, by far, could be found in the maple building. 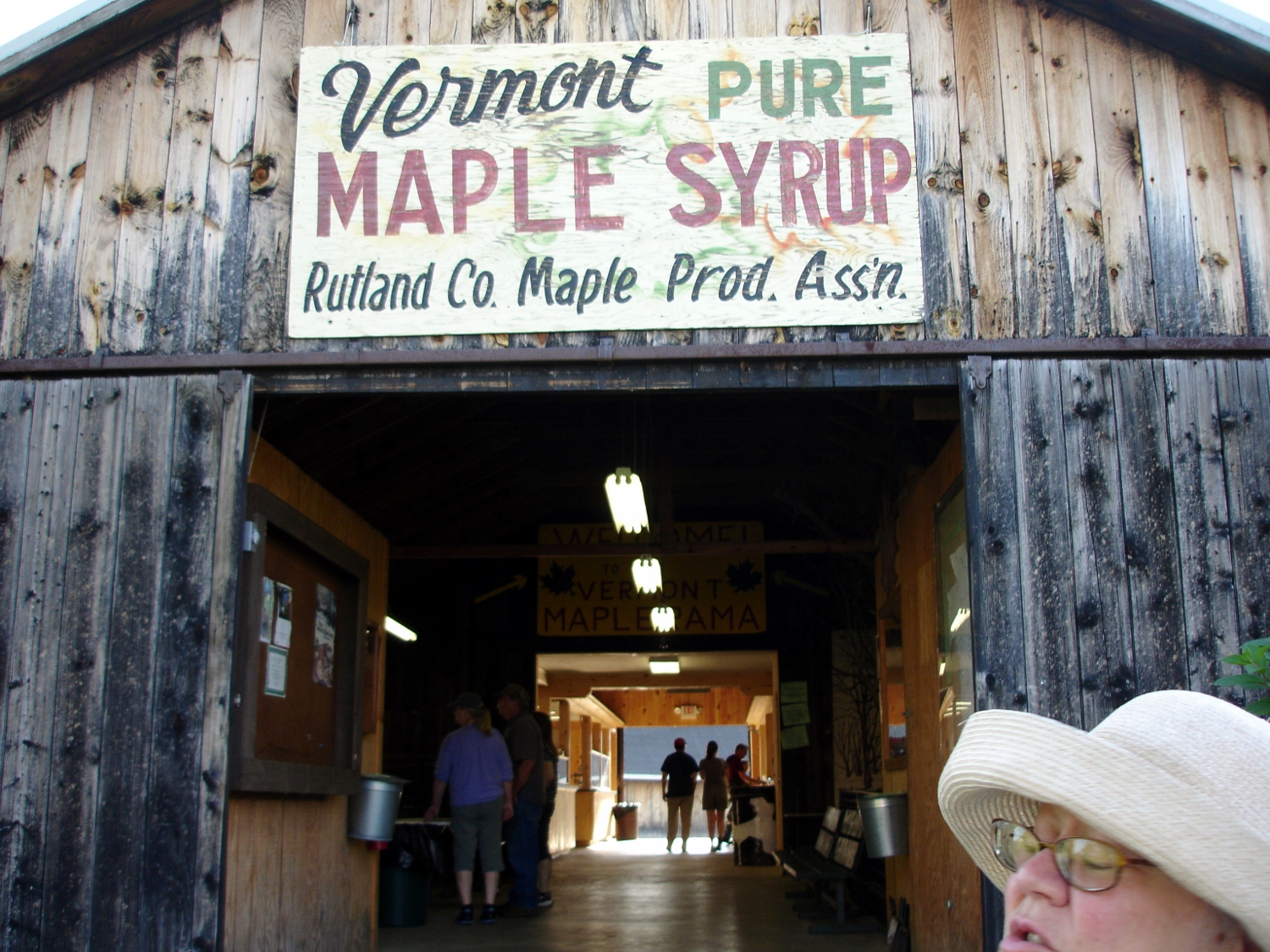 The maple building was the most interesting spot in the fair!

The maple building had extraordinary maple shakes, maple syrup tastings, maple pies, maple cotton candy, maple ice cream, and that rare maple country treat, sugar-on-snow, where boiled syrup is poured on crushed ice (or clean snow if it’s available). The syrup hardens to a taffy-like state, and is pulled of the ice with a stick or fork and eaten. It’s great fun! There were all kinds of demonstrations and maple processing equipment (which one kid from a maple producing family was eager to explain to us in great detail).

Would have loved to have seen the Rutland Cornet Band!

Roxie’s is a well-known French fry vendor at the fair, and they’ll also set you up with a Michigan if you’d like (Michigans are a style of hot dog found in a region around Plattsburgh, NY, about 115 miles to the northwest of Rutland). The fries are good, although good fries made from freshly cut potatoes are not exactly a rarity at fairs. Fried dough can also be found at fairs just about everywhere but here you can get the hot crusty fried bread topped with melted butter and real maple syrup. Now that’s good eatin’! 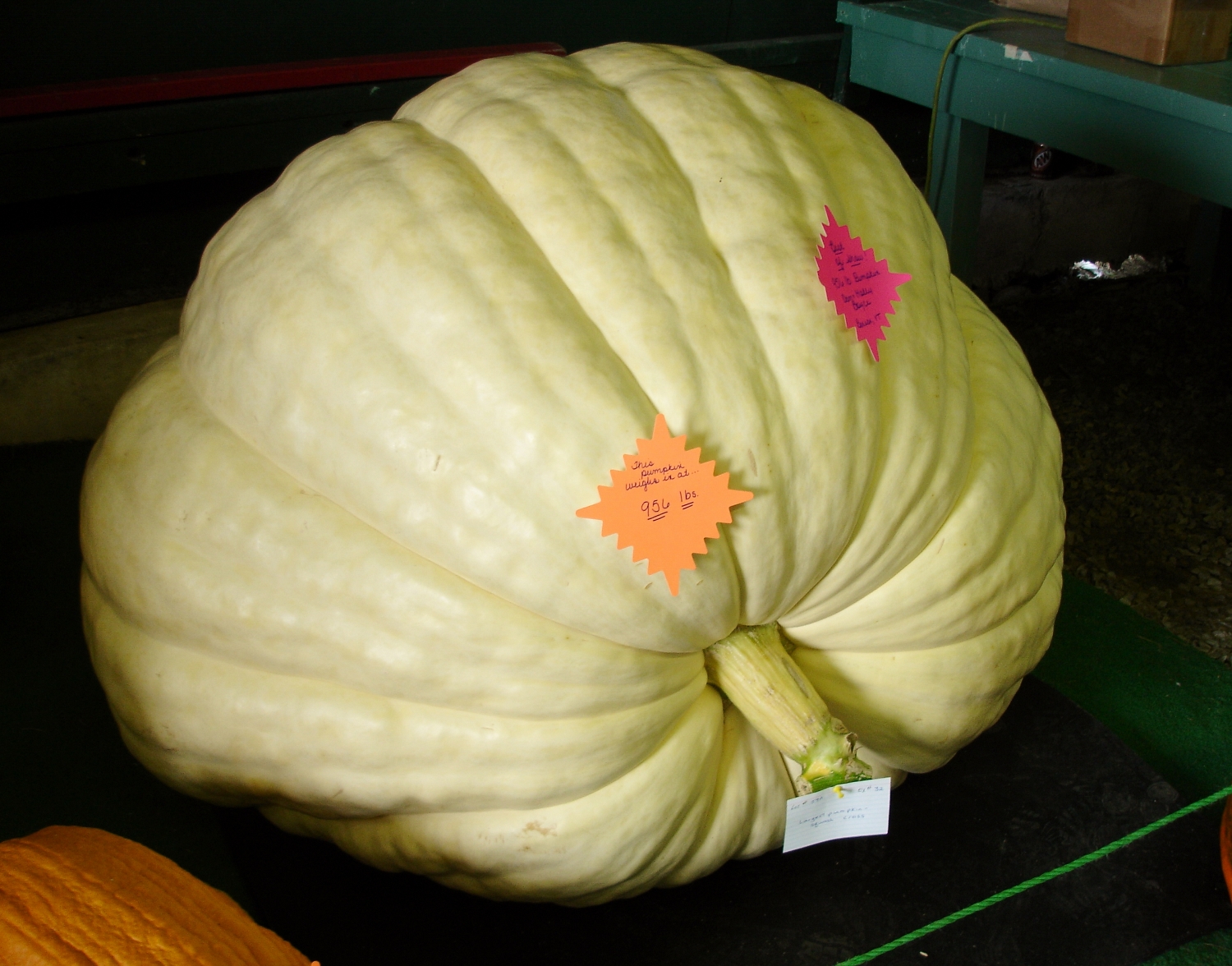 The fair organizers recently announced that next year’s fair will be cut back to six days, from the current ten (the original fair was a single day). New England is funny when it comes to state fairs. Our first take, many years ago, was that the New England states, with their long rural histories, would put on the nation’s best state fairs but we’ve since learned that the opposite is true. In fact, three of the six states, Connecticut, Rhode Island, and Massachusetts, do not even put on a state fair. New Hampshire doesn’t really either, although they have a fair called the Hopkinton State Fair which is often considered their state fair. And Maine has both the Bangor State Fair and the Skowhegan State Fair but they are really regional fairs. 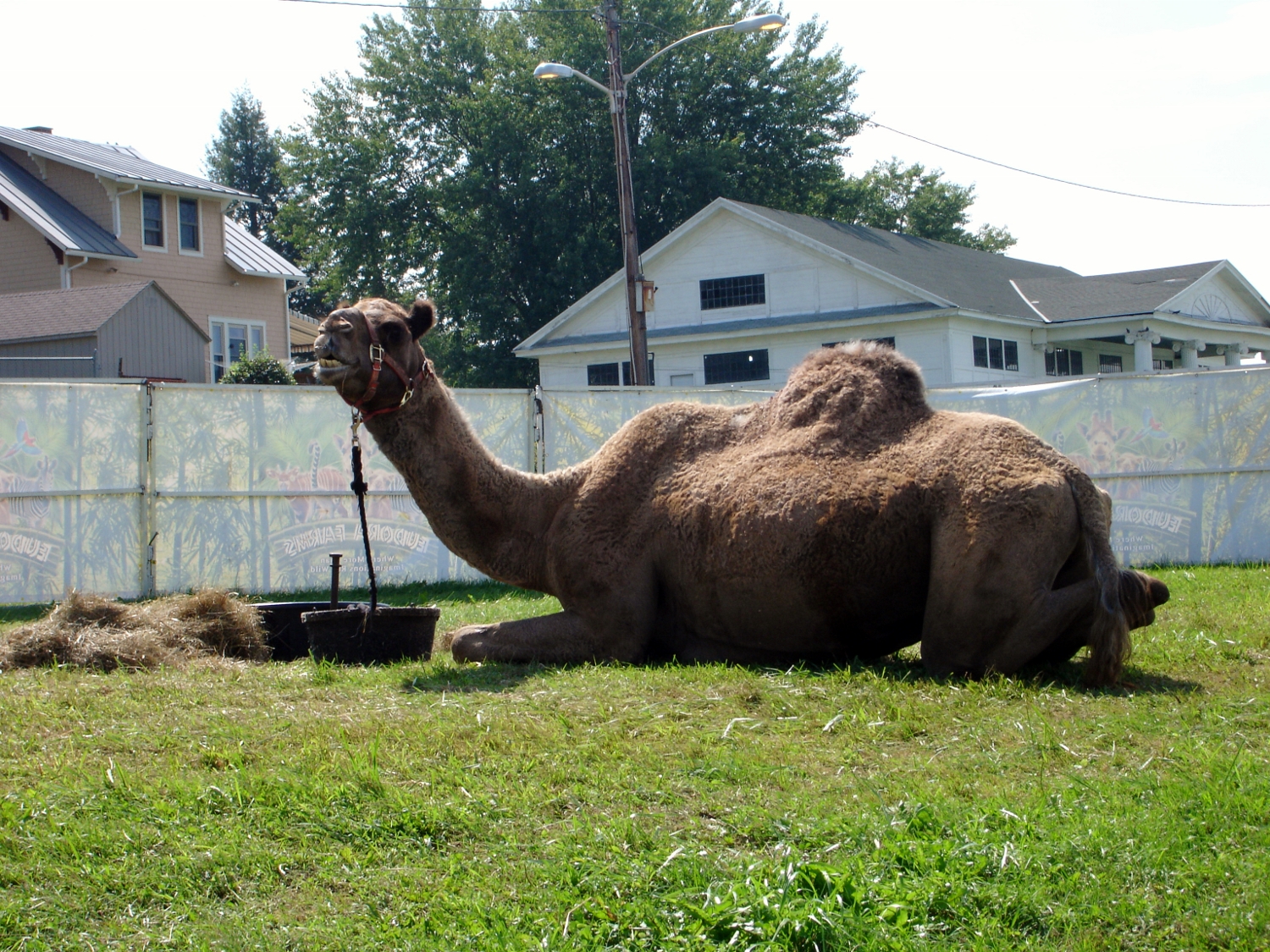 Ride a camel at the Vermont State Fair.

The problem with state fairs in this region? Simply, there are abundant town, county, and regional fairs with very long histories. They don’t need state fairs! And many of their regional fairs are the match of state fairs in other parts of the country. Massachusetts has The Big E, which is something like a State Fair of New England. Vermont has the Tunbridge World’s Fair, which goes back to the 19th century and is more highly regarded than the official state fair. Connecticut’s biggest fair is the 100-year-old Durham Fair. Rhode Island has the Washington County Fair. If you love agricultural fairs, New England can supply you with some of the finest in the country. Just don’t expect to find great state fairs.