Sharkey’s is the spiritual home of the spiedie, a Binghamton-only shish kebab cousin with an Italian-American genealogy. The word spiedie is said to come from an Italian word for the skewer upon which meat is cooked, or perhaps the meat on that skewer. In Binghamton, that meat was originally lamb but it’s been decades since anyone has seen a lamb spiedie around here. Pork had become traditional until the last decade or two, when chicken has overtaken it to become the spiedie of choice (much as chicken has elbowed other meats aside all over the country, so that chicken cheesesteaks and chicken-topped pizzas are not uncommon – this is a development that irritates us no end). 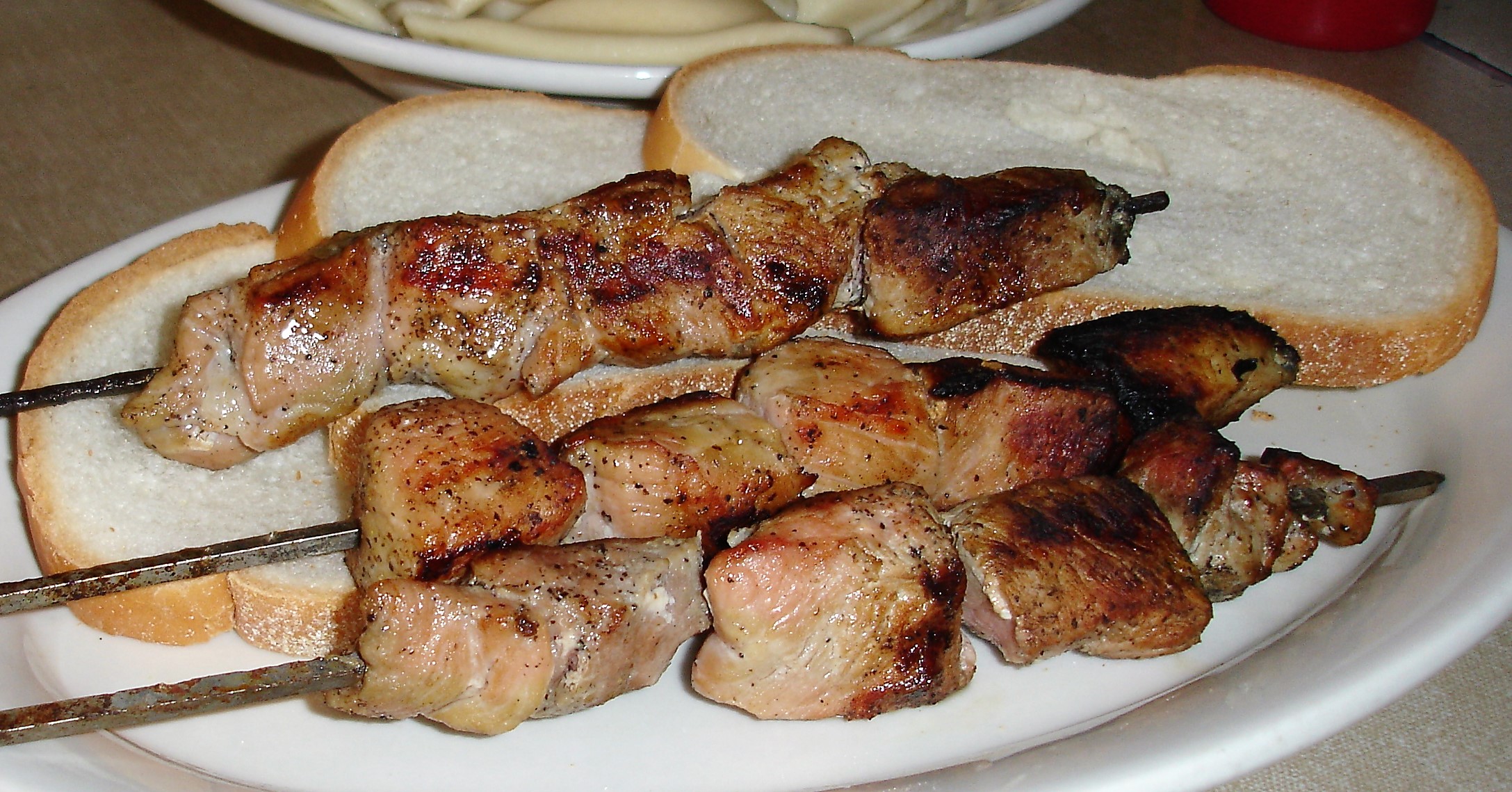 The well-marinated meat arrives from its stay on the grill flecked with spice and nicely crusted.

The chunks of meat are marinated for at least a couple of days, maybe longer, in a heavily seasoned, Italian dressing-like marinade with plenty of garlic. They are then skewered, without vegetables, and cooked over hot coals until crusty. One eats spiedies by grasping a soft slice of local Italian bread and wrapping it around the skewered meat, sliding it off the stick. The result is a sandwich of highly flavored meat, and only meat. You don’t add ketchup, mustard, mayo, relish… no, spiedies are nothing but meat and bread. They go great with beer. 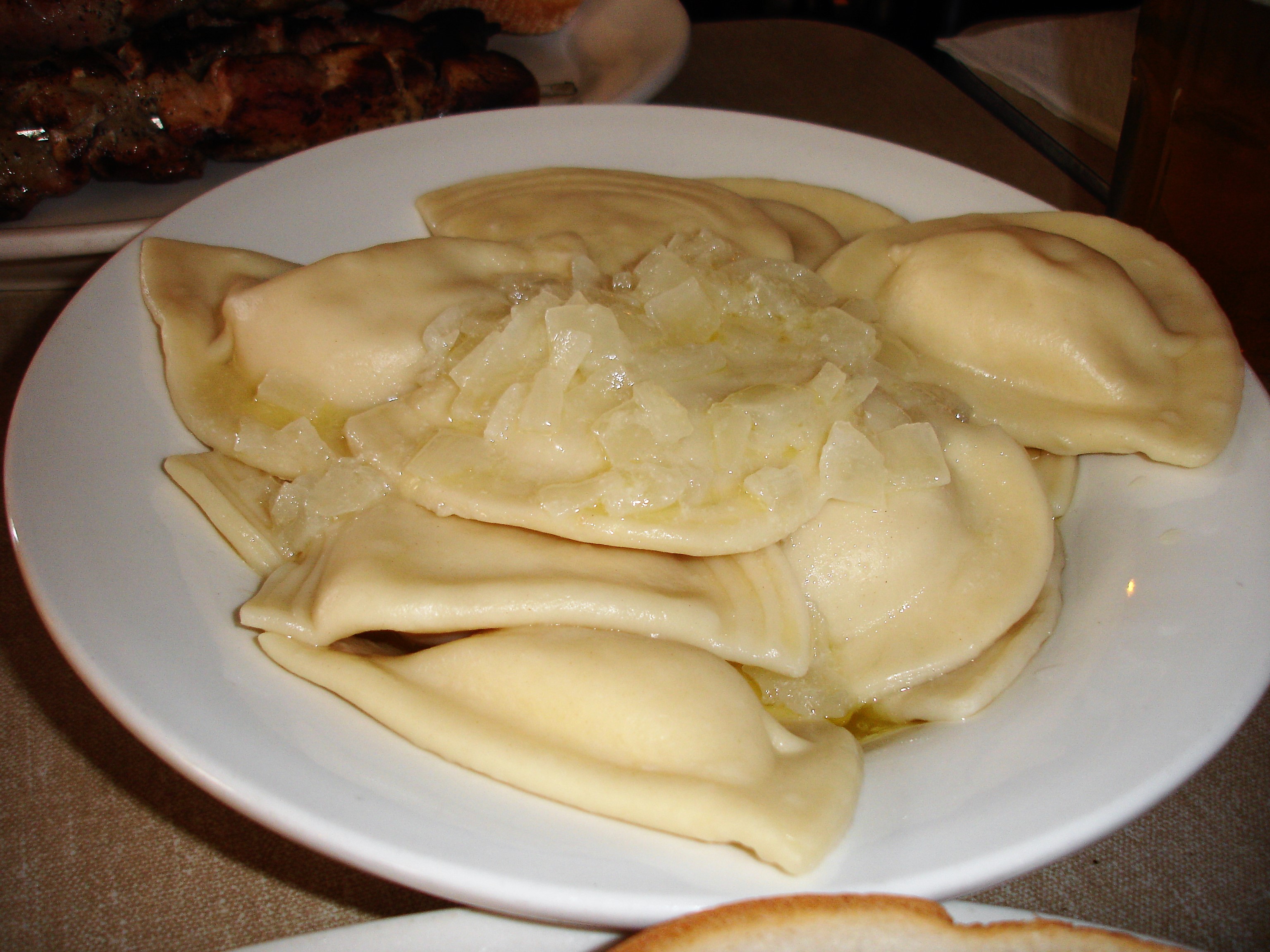 They are apparently nothing more than boiled, frozen pierogi but the oniony, buttery dumplings go well with spiedies.

All that said, today’s spiedies break with convention often enough that most locals probably aren’t even aware of the so-called conventions. Many spieidie joints have dispensed with the skewers and coals, cooking the marinated chunks of meat on a flat top. Peppers and onions, even cheese, are regularly added to the mix. Big, bready sub rolls are not uncommon. 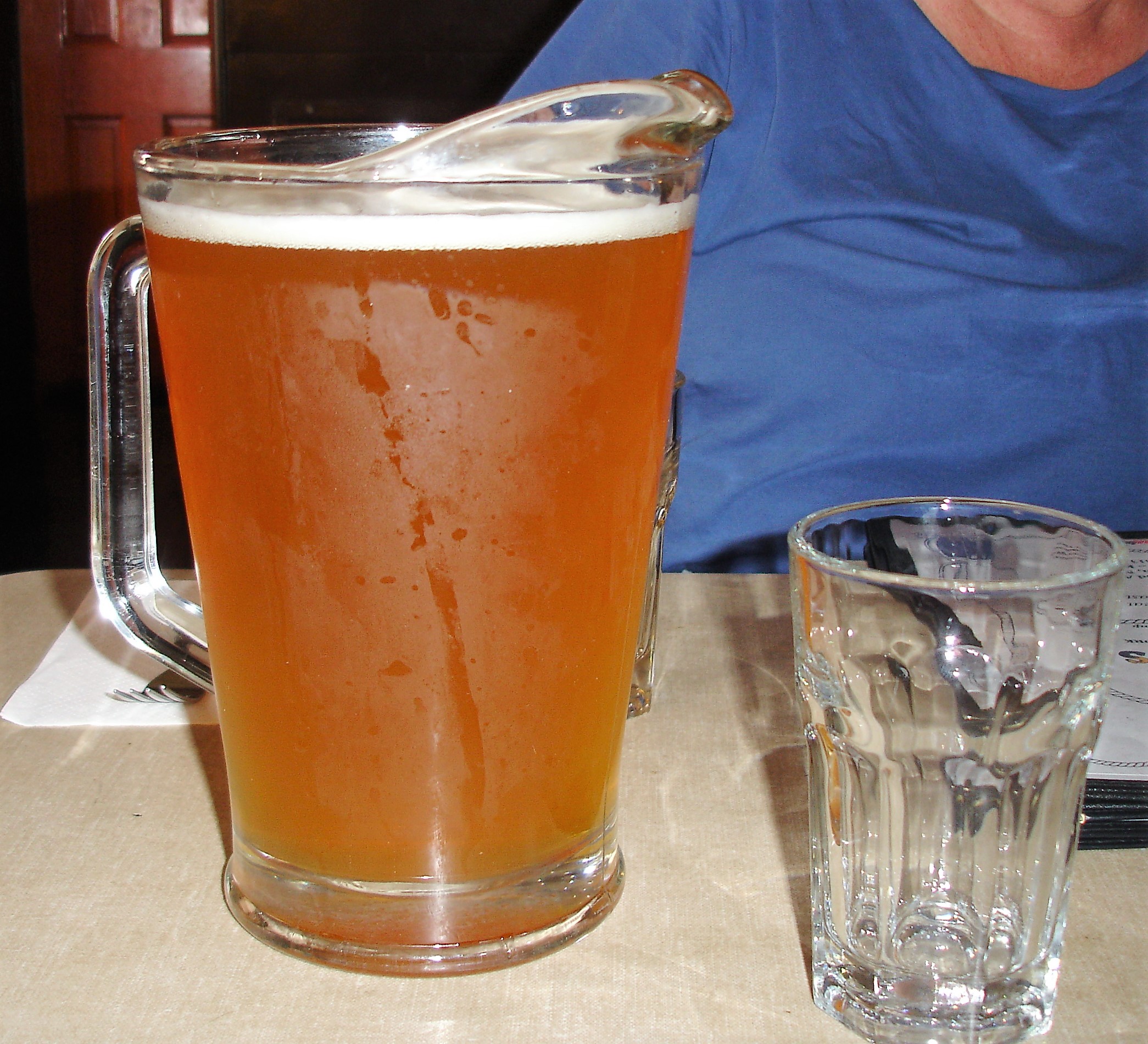 We wouldn’t dream of making a spiedie stop at Sharkey’s without an accompanying pitcher of brew.

Far be it from us to denigrate how other folks enjoy their food, but when it comes to spiedies, we’re traditionalists. We want pork spiedies, cooked on skewers over coals, with bread and without sauces, vegetables, or garnishes. And the best place for that configuration is the old Binghamton bar called Sharkey’s. While Sharkey’s was not the originator of the spiedie, they are the standard-bearer. 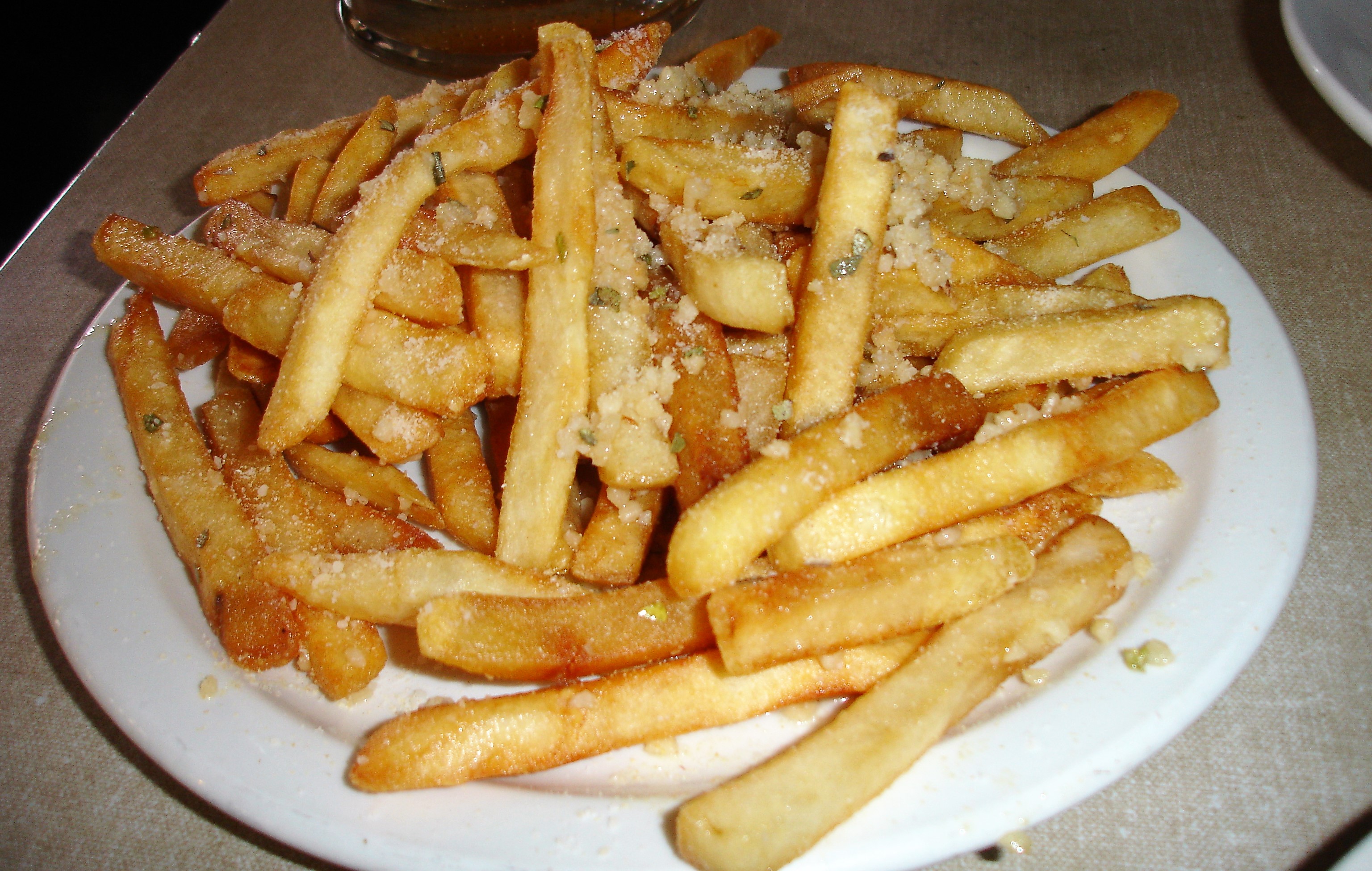 Every once in a while we go off script at Sharkey’s. The garlic fries are crisp but the apparently jarred chopped garlic, applied with a liberal hand, is too tame.

The Sharaks opened Sharkey’s in the 1940s and continue to run the joint today. One of the things we love about Sharkey’s, and which turns off some potential customers, is how little has been done over the decades to jazz the place up. We’ve been coming here since the 1970s and suspect that if you dropped our ’70s selves into the 2017 Sharkey’s we would be none the wiser. The bathrooms are roomier and more pleasant but the same cardboard signs touting spiedies and clams are up on the walls, a row of local men are still drinking cheap beers at the bar up front, a similar electronic puck bowling game remains in the middle of the dining room, the same dark, high-backed wooden booths surround steel-banded Formica tables. And we adore every last detail. 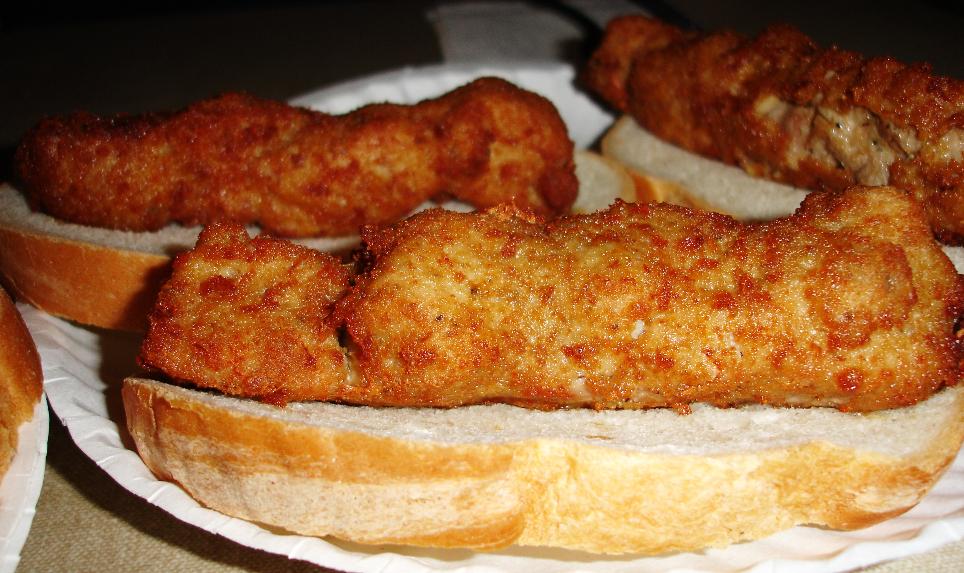 City chicken also comes on skewers, and is fried.

One more thing that has not changed: the spiedies. Yes, even Sharkey’s now offers chicken spiedies but we pay them no mind. The pork spiedies are as good as ever, hot off the grill, crusty and blackened in spots, flecked with spice. Pitchers of beer are de rigueur. We find three spiedies per person to be about right, and know that Sharkey’s runs specials on certain days of the week (Monday is one of those days) when they offer three spiedies at a bargain rate. 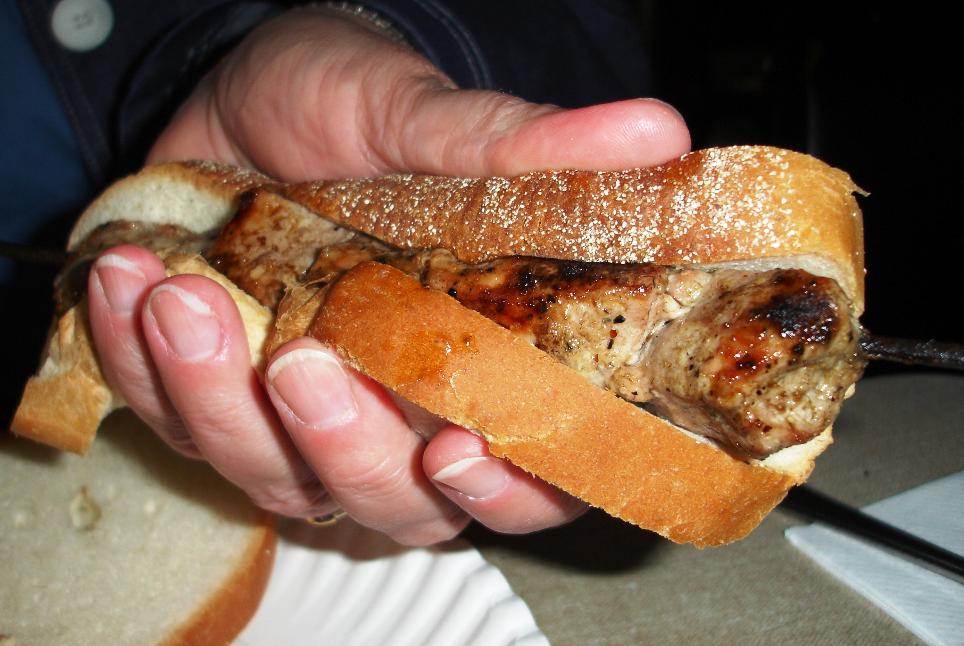 To eat a spiedie, you grab a slice of soft, pre-sliced Italian bread, wrap it around the skewered meat, and then yank the skewer away. Voila! You have a spiedie sandwich ready to eat. Condiments? Nope, eat it as it comes off the skewer, bread and meat only.

We always order a dozen pierogi with our spiedies, but these are not anything special (we don’t know but we believe they are your standard Mrs. T’s frozen pierogi). They are served boiled, not fried, and they are immersed in melted butter and soft onions. Don’t tell anyone but we admit to dipping our spiedies in the oniony butter every once in a while. 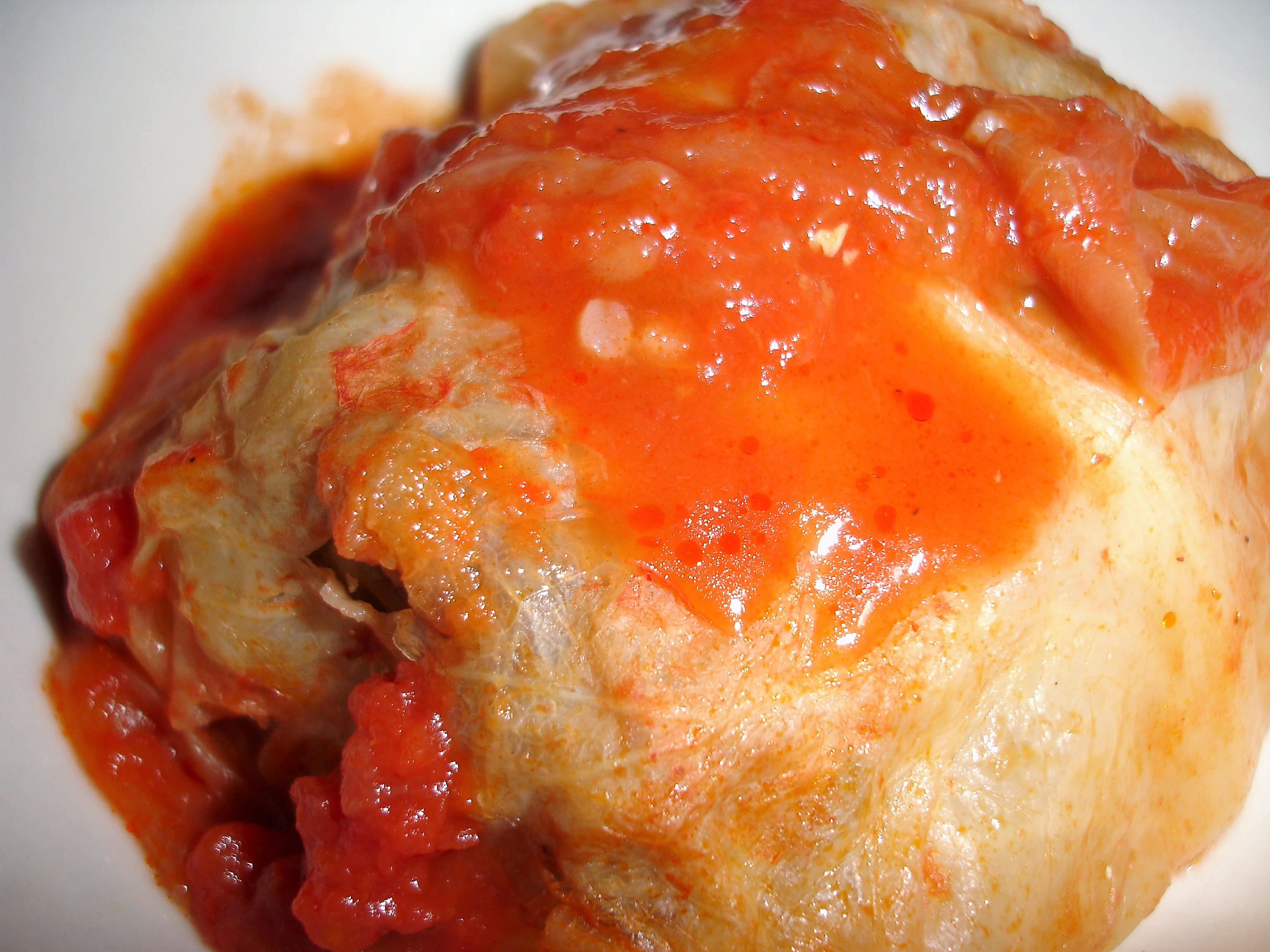 Gently spiced stuffed cabbage is a nice change of pace accompaniment to spiedies.

Sharkey’s is also known for their city chicken and clams. Far as we can tell, the city chicken is simply their spiedies deep-fried instead of grilled — somebody correct us if we’re wrong — and they are quite good that way. The clams? Steamed clams are an upstate NY passion, one that we just cannot participate in. We love steamers, those soft shell clams with a neck that you find on the New England shore. Here, hundreds of miles from the ocean, they use hard shell behemoths, the kind that are used for chowder at the shore. We fail to see the appeal. 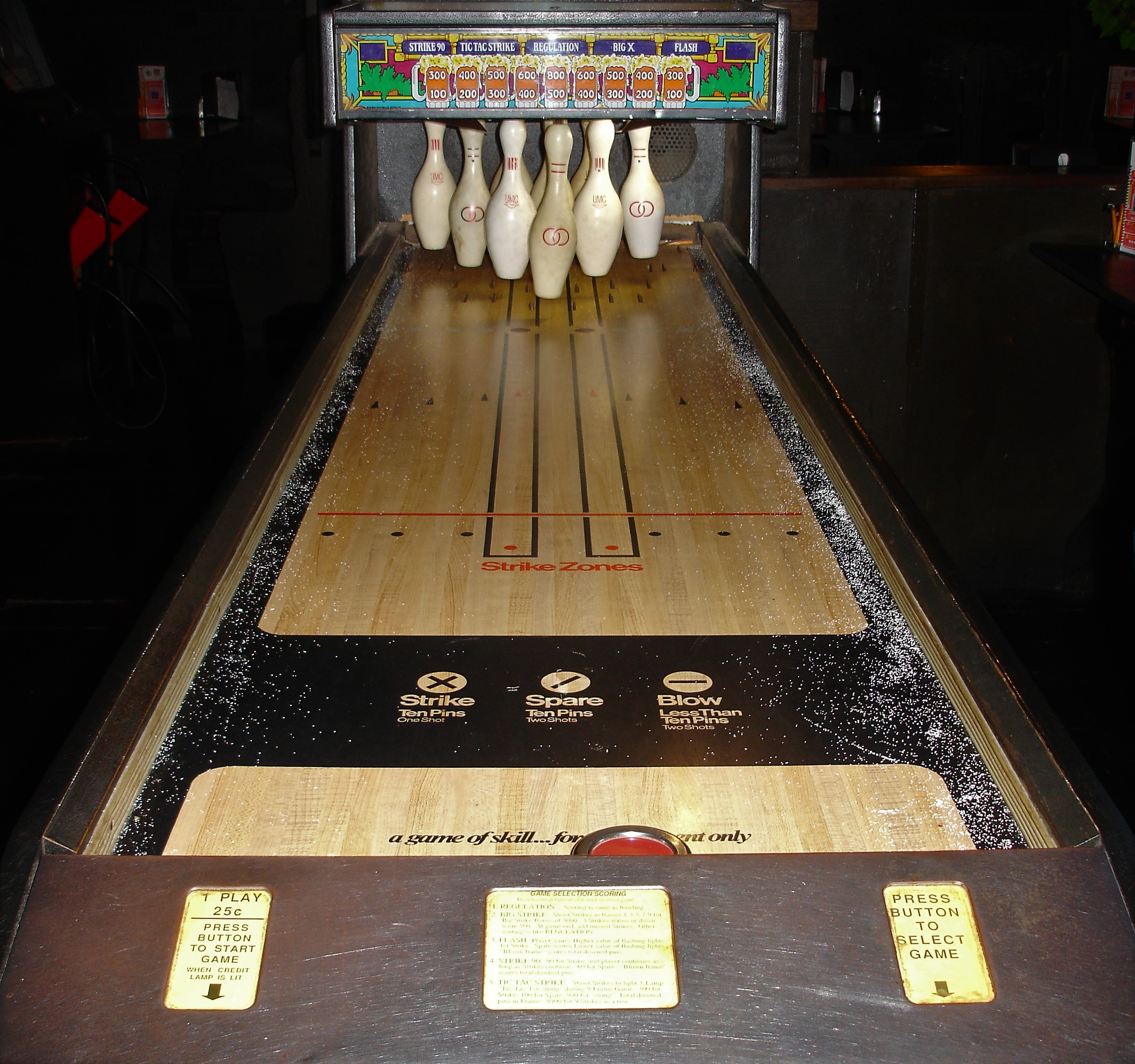 A visit to Sharkey’s is not complete without a bowling competition.

There are burgers, wings, hot dogs, sandwiches, pizza… even a spiedie pizza, but we’ve never tried any of them in over 40 years of dining at Sharkey’s. To paraphrase the ubiquitous winking chef giving the OK sign on the takeout pizza boxes across America: We’ve tried the best, why try the rest?! 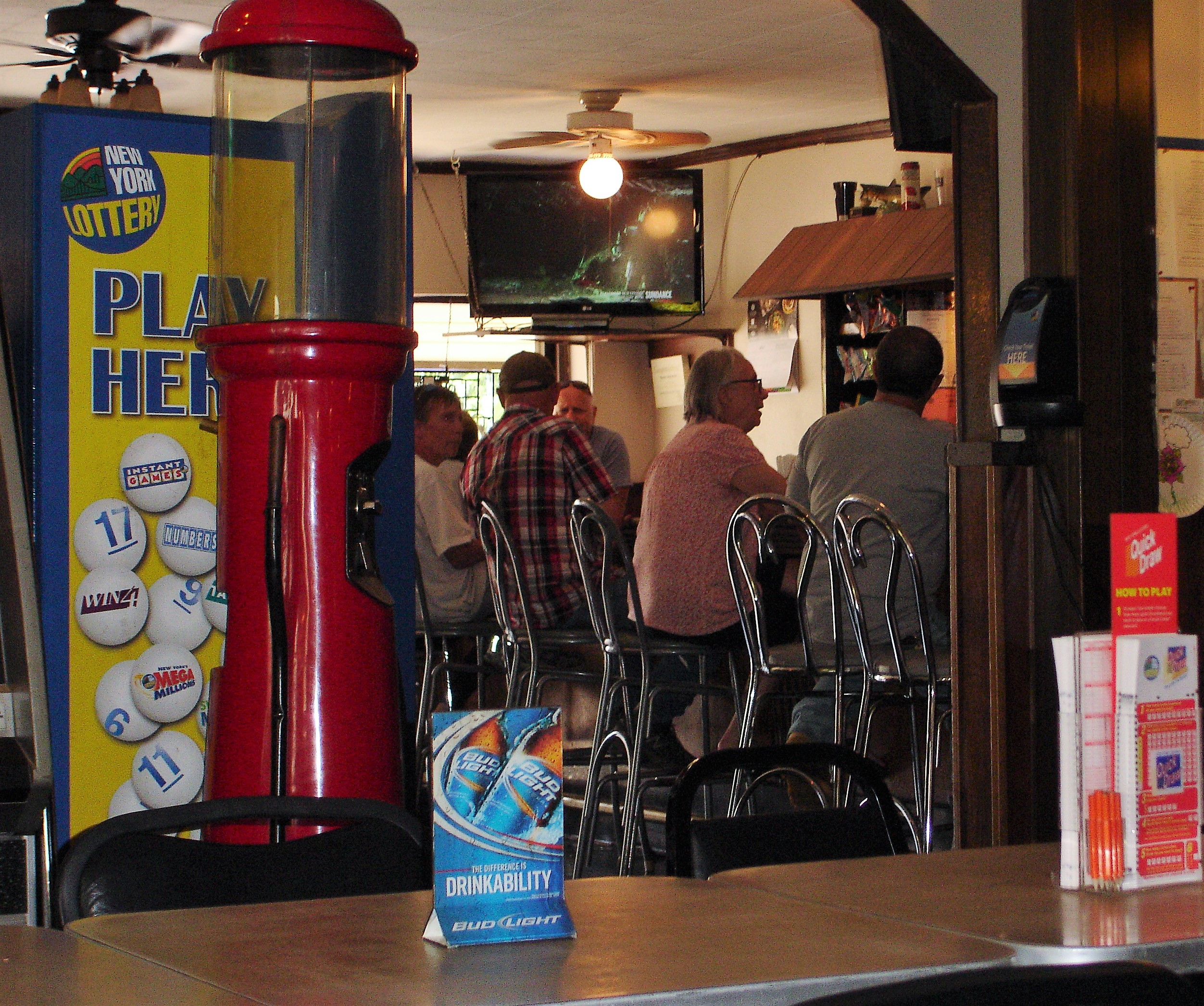 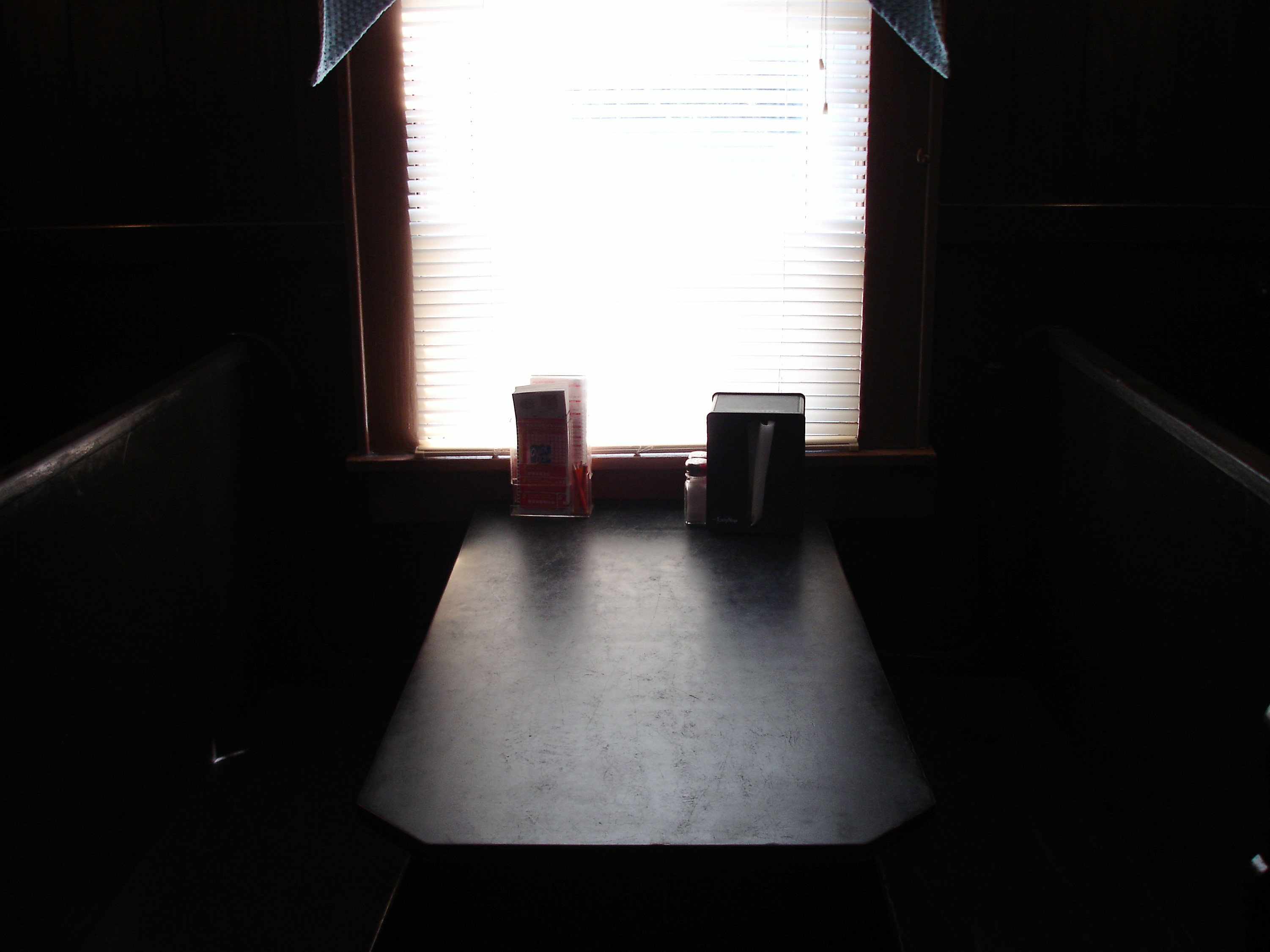 One of the ancient wooden booths at Sharkey’s 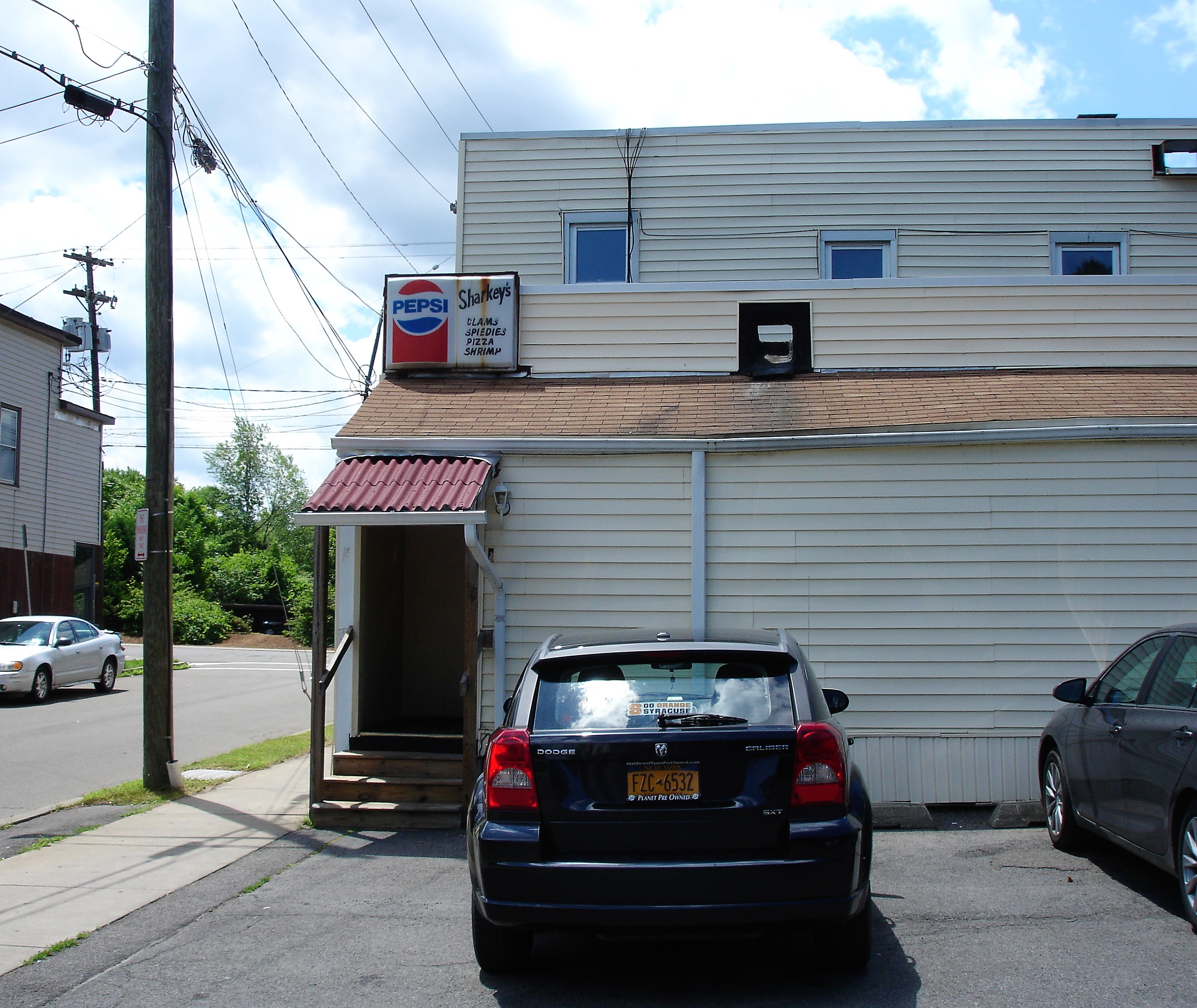 Most people use the rear entrance off Sharkey’s parking lot. 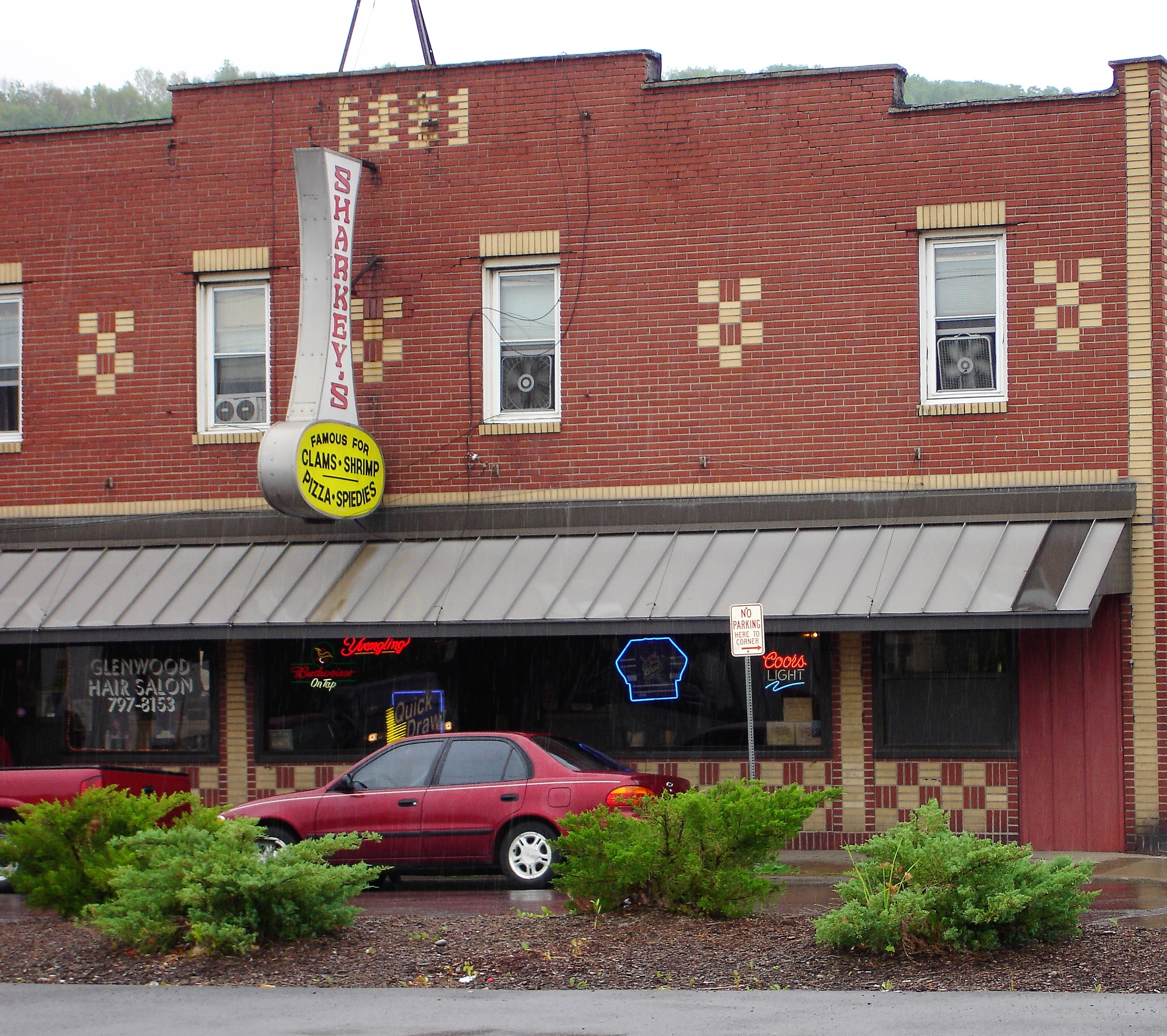 The old sign in front of Sharkey’s was destroyed in a truck accident in 2017. It’s since been replaced with a snazzy new model.