There was once a time when Minnesota’s 160-mile North Shore of Lake Superior was dotted with fish smokehouses from Duluth to the Canadian border. Betty’s Pies actually began as a family fishhouse. Mel’s Fish of Knife River was sold in 2007 and became Great! Lakes Candy Kitchen. Lou’s, up the road in Two Harbors, closed in 2013. 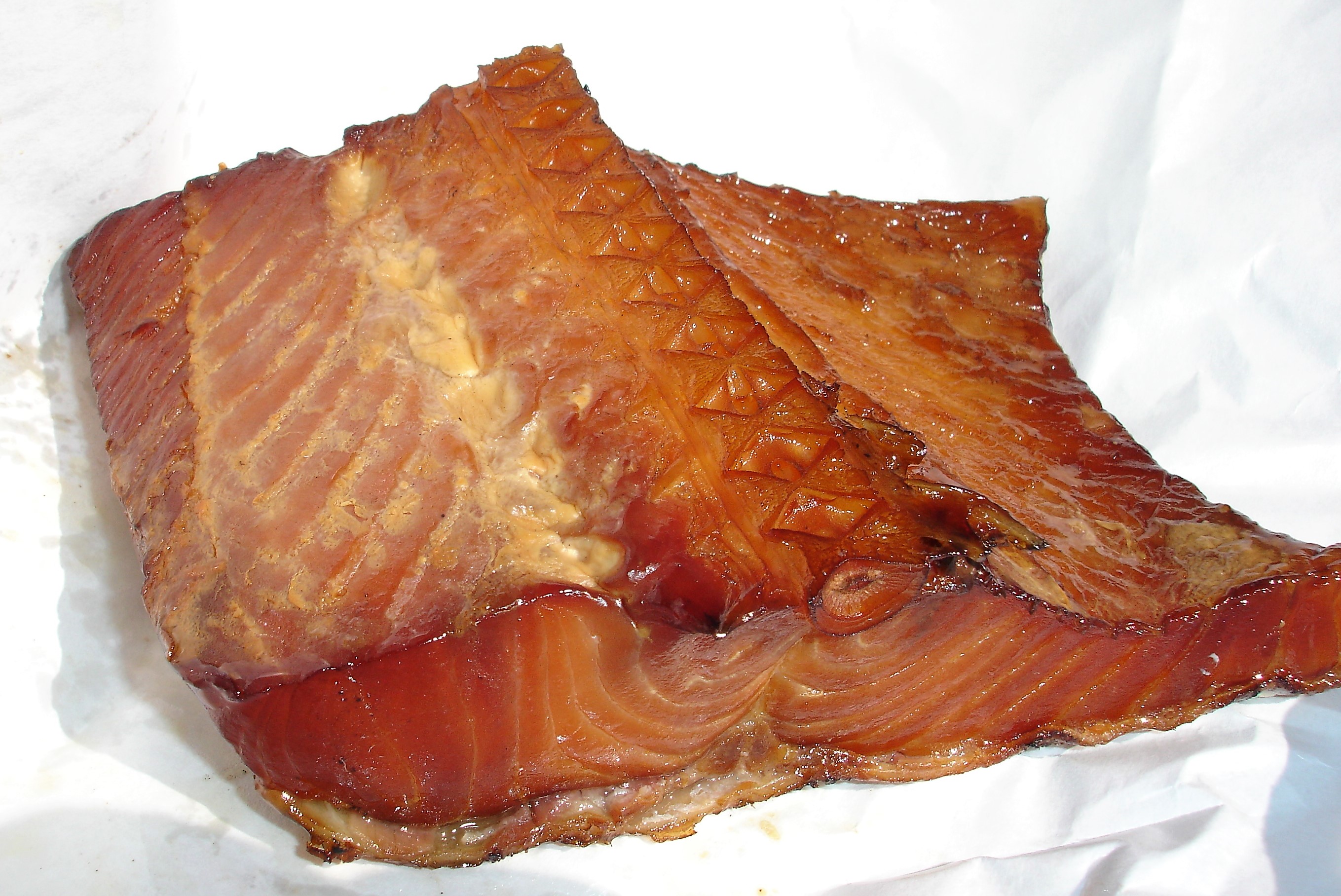 Smoked trout presents the least amount of challenge in getting to the smoky flesh.

Russ Kendall’s Smokehouse, one of the oldest of them all, having been founded by the late Russ Kendall’s father in the early 1900s, is, as far as we can tell, the last of the smokehouses between Duluth and Grand Marais. The survival of this long-time family smokehouse is more than just happenstance, we can assure you; it’s not by default that they win the smokehouse derby. Their smoked fish is really, really good. 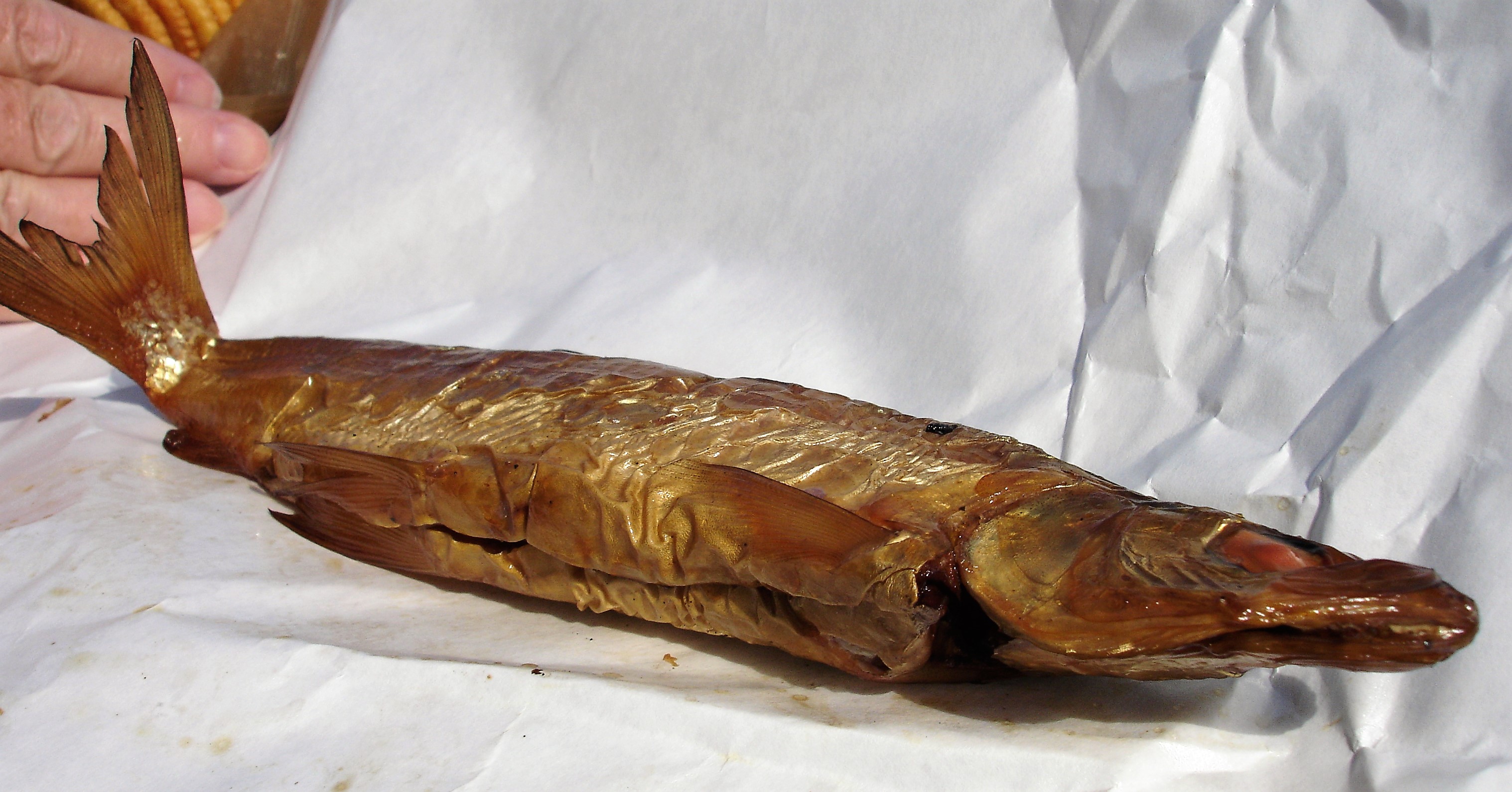 This is not your father’s smokehouse. It’s your grandfather’s. We mean no disrespect to Eric Goerdt and Northern Waters in Duluth — Mr. Goerdt studied fish smoking and turns out a sophisticated and delicious product — but Russ Kendall’s fish, brined for a day and smoked over maple wood, feels more like an old-time product of rural America. Perhaps it’s partly the backwoods setting, and the heavily bearded customers decked out in camo or old flannel and work pants. Depending on your point of view, you might say Kendall’s smoked fish is too dry and over-smoked, or, like us, you might find it meaty and wonderfully woodsy.

A cisco with its skin pulled back to show its firm and oily flesh. Cisco has a distinct fishiness that reminds us of the flavor of whiting.

The Kendalls smoke fish that get pulled from the lake by local fishermen: whitefish, trout, herring, and cisco (it’s our understanding that cisco is another name for Lake Superior herring, so how do Kendall’s herring and cisco differ?). You’ll also find salmon, which is brought in from the Northwest, and beef jerky. There’s a homey, house-made smoked salmon spread as well, available with a sleeve of Ritz or saltines. Everything we tried is well-bronzed, very smoky, fish oil-moist, and firm-textured. Trout is the easiest fish to eat, pulling from the skin in big, clean hunks. The whitefish is our favorite, relatively easy to separate in big chunks from the tiny bones, and smoke-scented through and through. 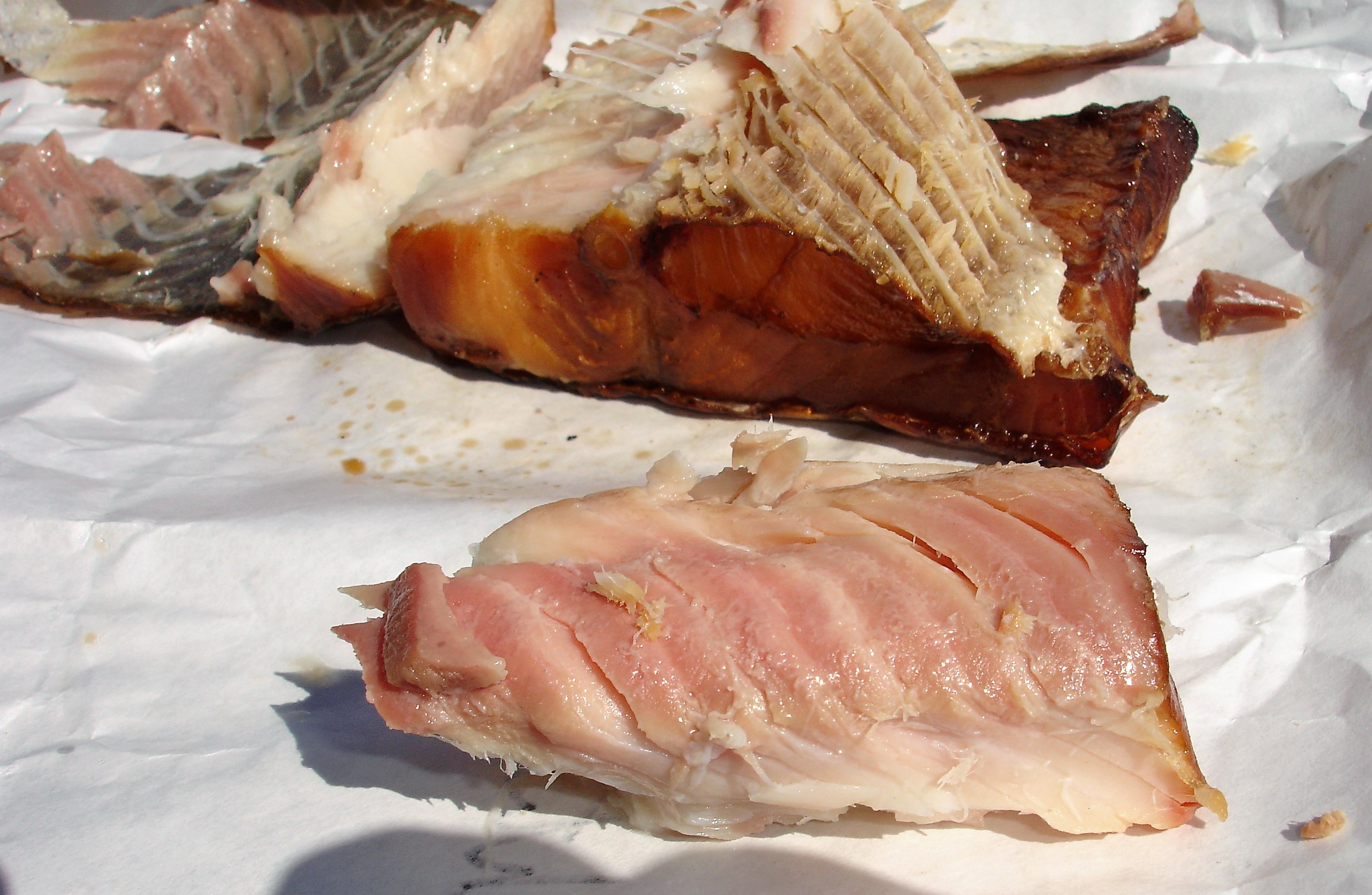 A choice morsel of whitefish separated from the bones

You can unwrap your fish in the bar that makes up the other half of Russ Kendall’s, where signs advertise Grain Belt and long-gone Royal Bohemian. We like to take our packages up the road to one of the picnic tables with a view of Lake Superior, in Gooseberry Falls State Park. The perfect beverage to accompany a smoked fish lunch is beer. You are not supposed to bring beer into the state park. If you choose to ignore that law, just be sensible about it, don’t overdo it, and clean up when you are done. 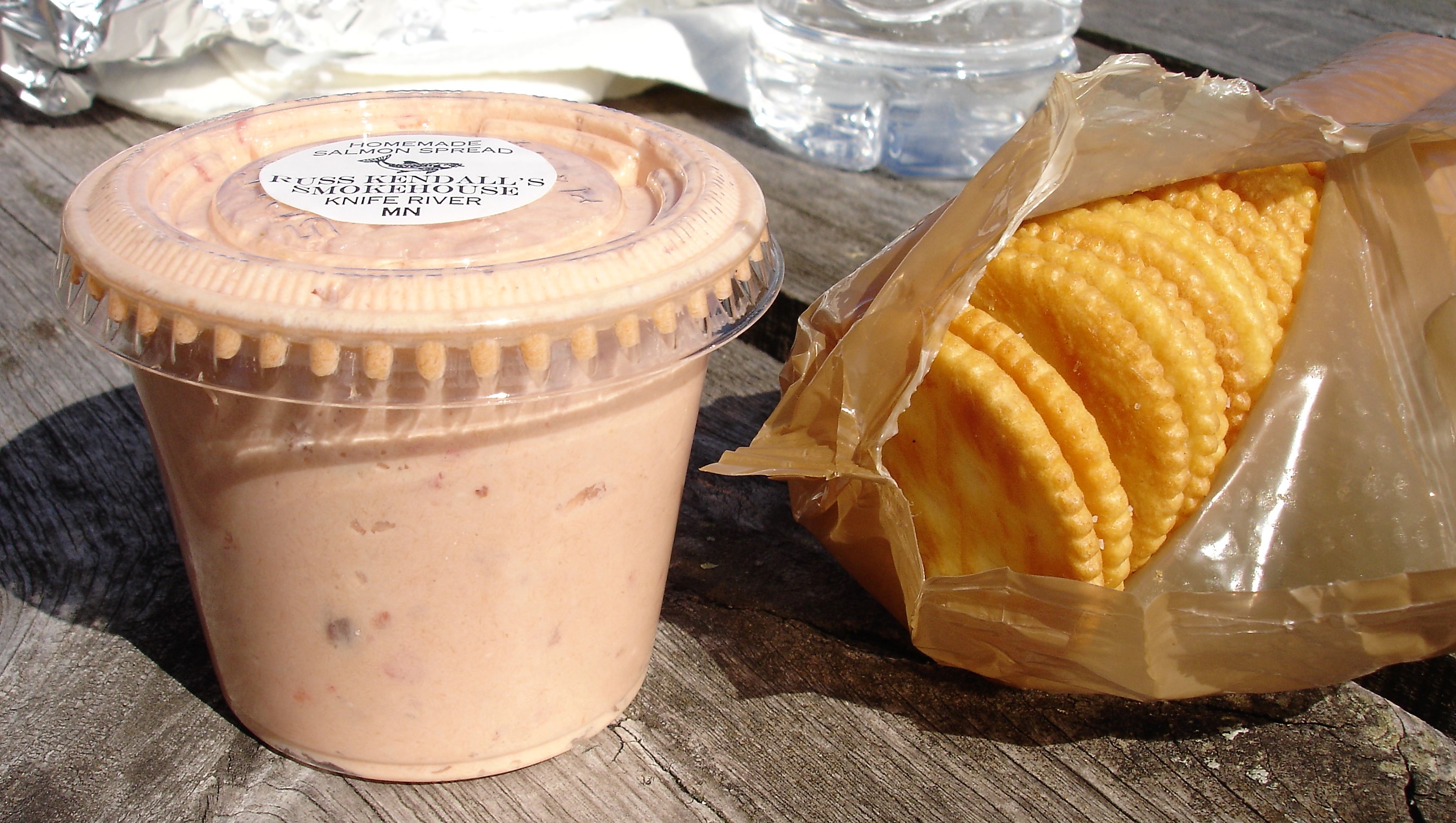 The salmon spread, apparently made with cream cheese and, we’d guess, Worcestshire, is very popular. It’s good stuff but we have to warn you: once you start eating the fish, you can’t go back for a bite of spread on a cracker: by then, after the intensity of the smoky fish, it just tastes like cream cheese.

Russ Kendall’s Smokehouse will ship to you. Check their Facebook page for details. 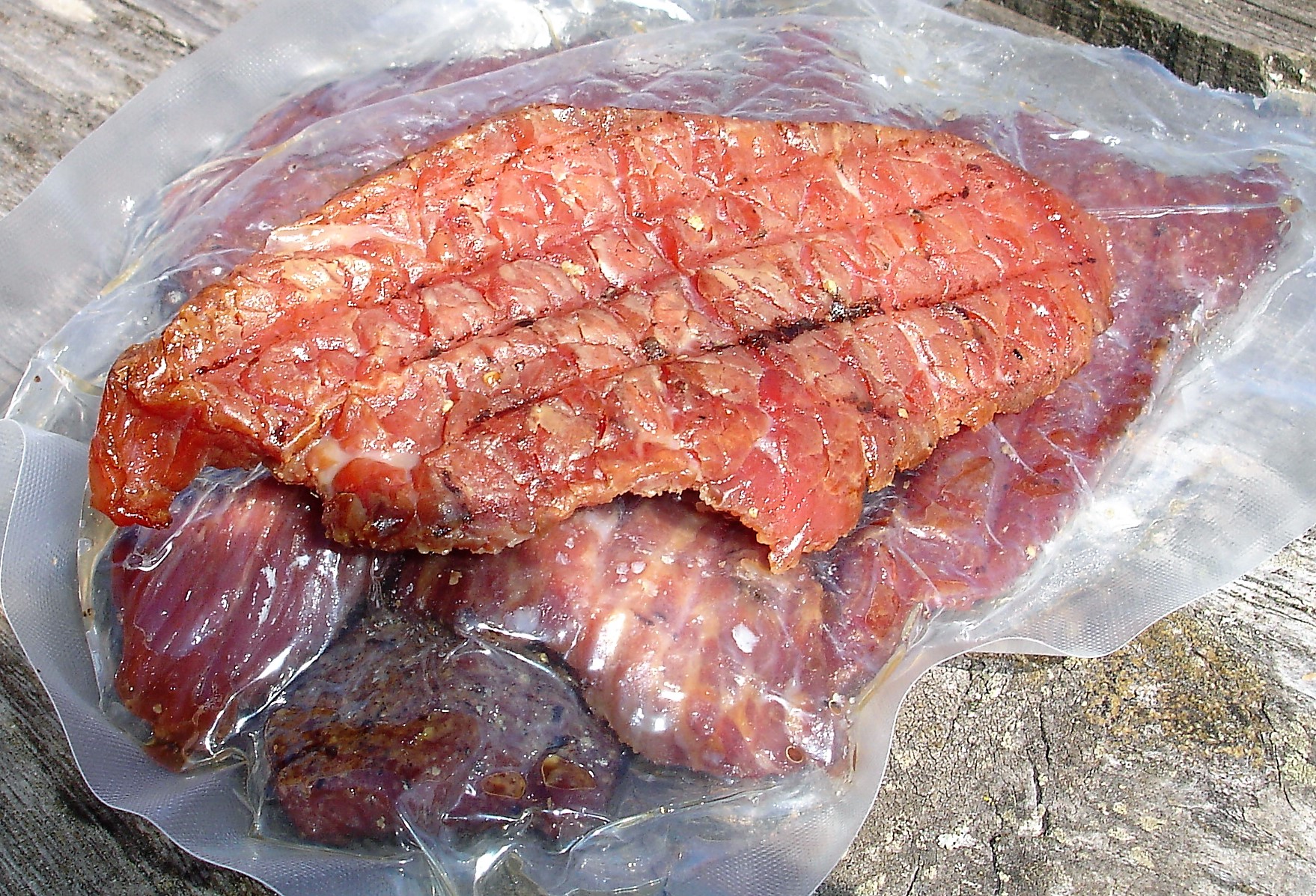 The beef jerky is unusual, in that it’s softer and moister than the usual thing, with a flavor something like grilled steak. We like it. 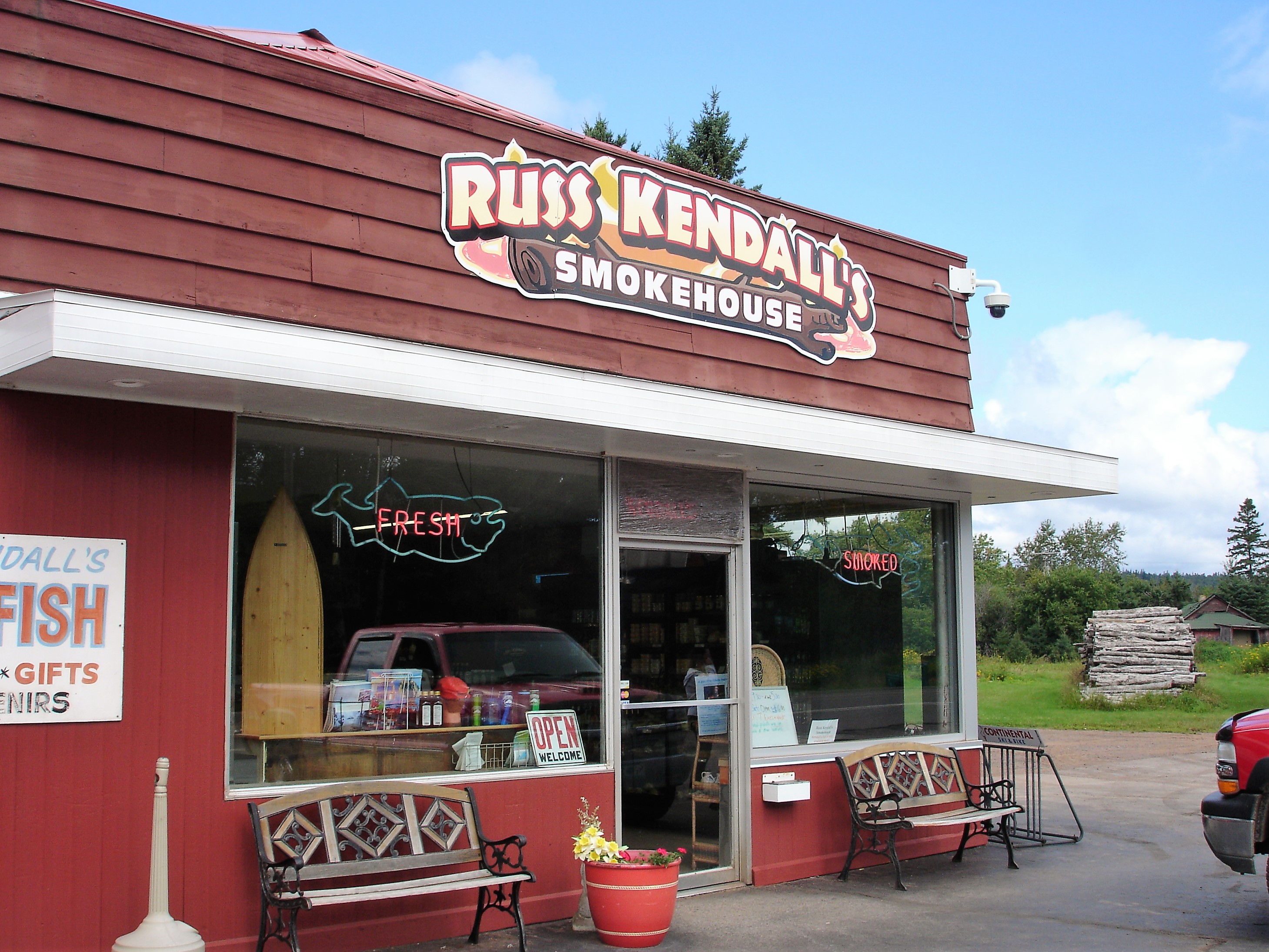 Check out the pile of smoking wood next to Russ Kendall’s. 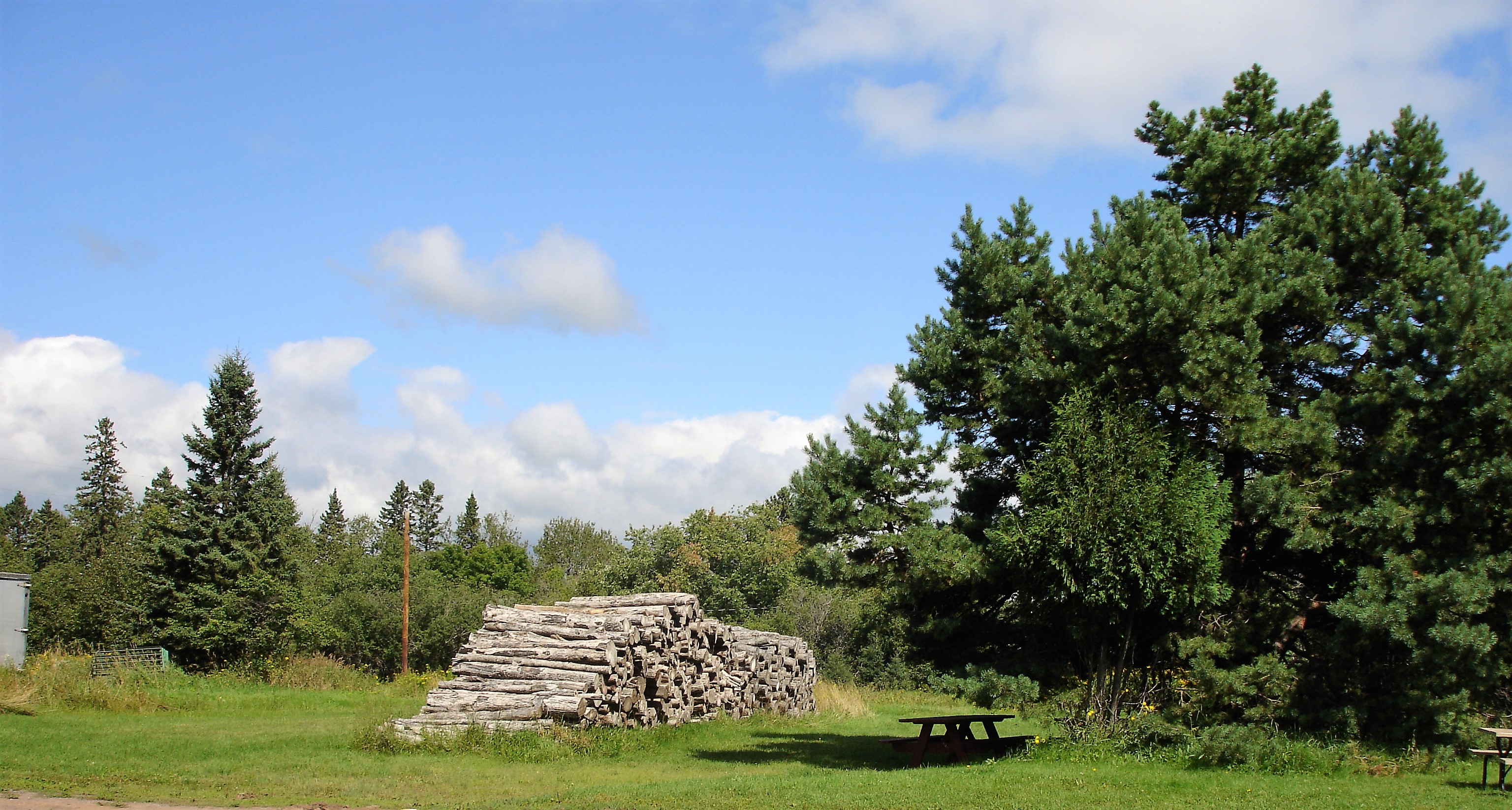 There is outdoor seating at Russ Kendall’s for those who just can’t wait. 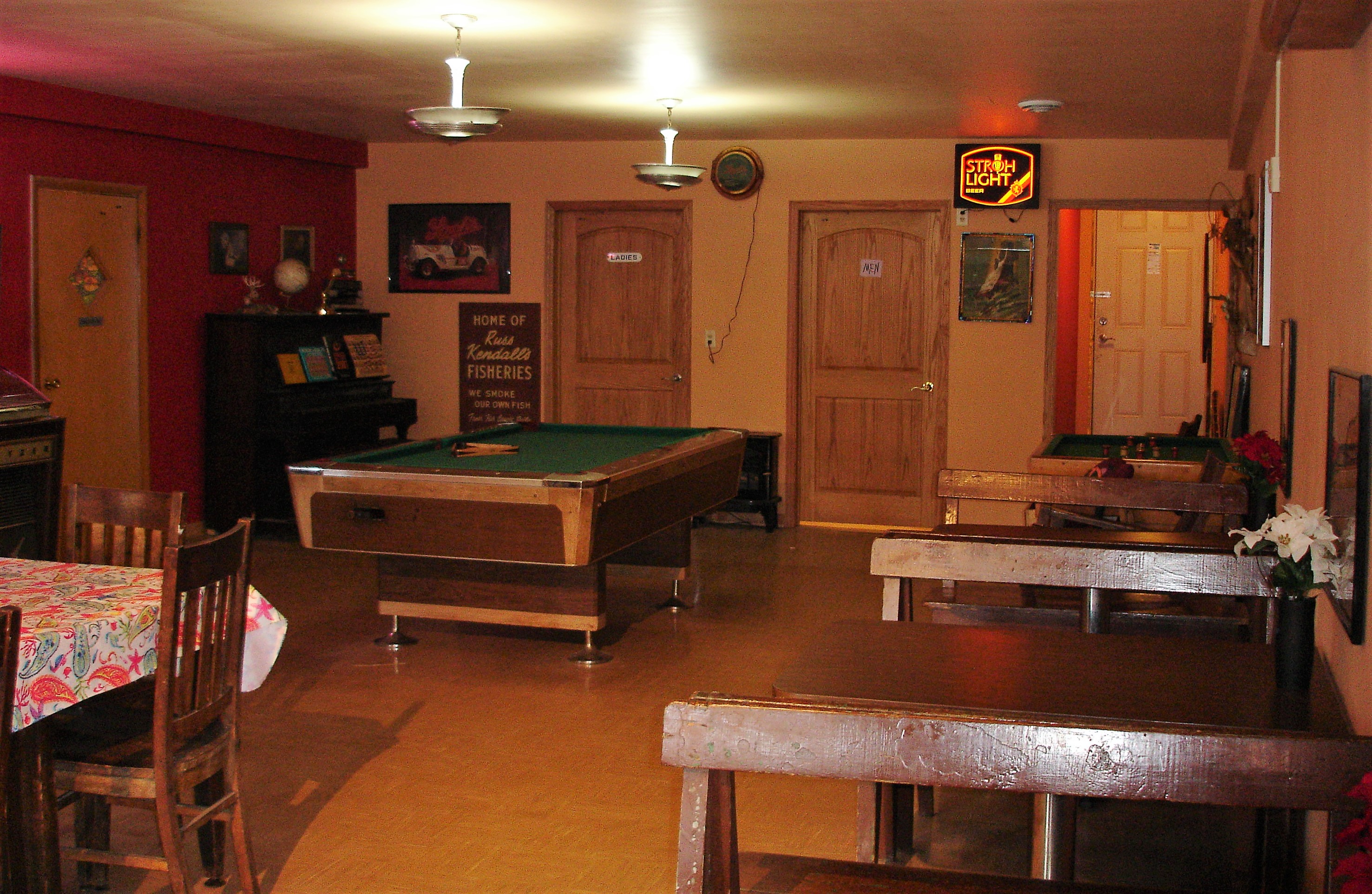 There’s also an attached bar with a pool table and some rustic tables. 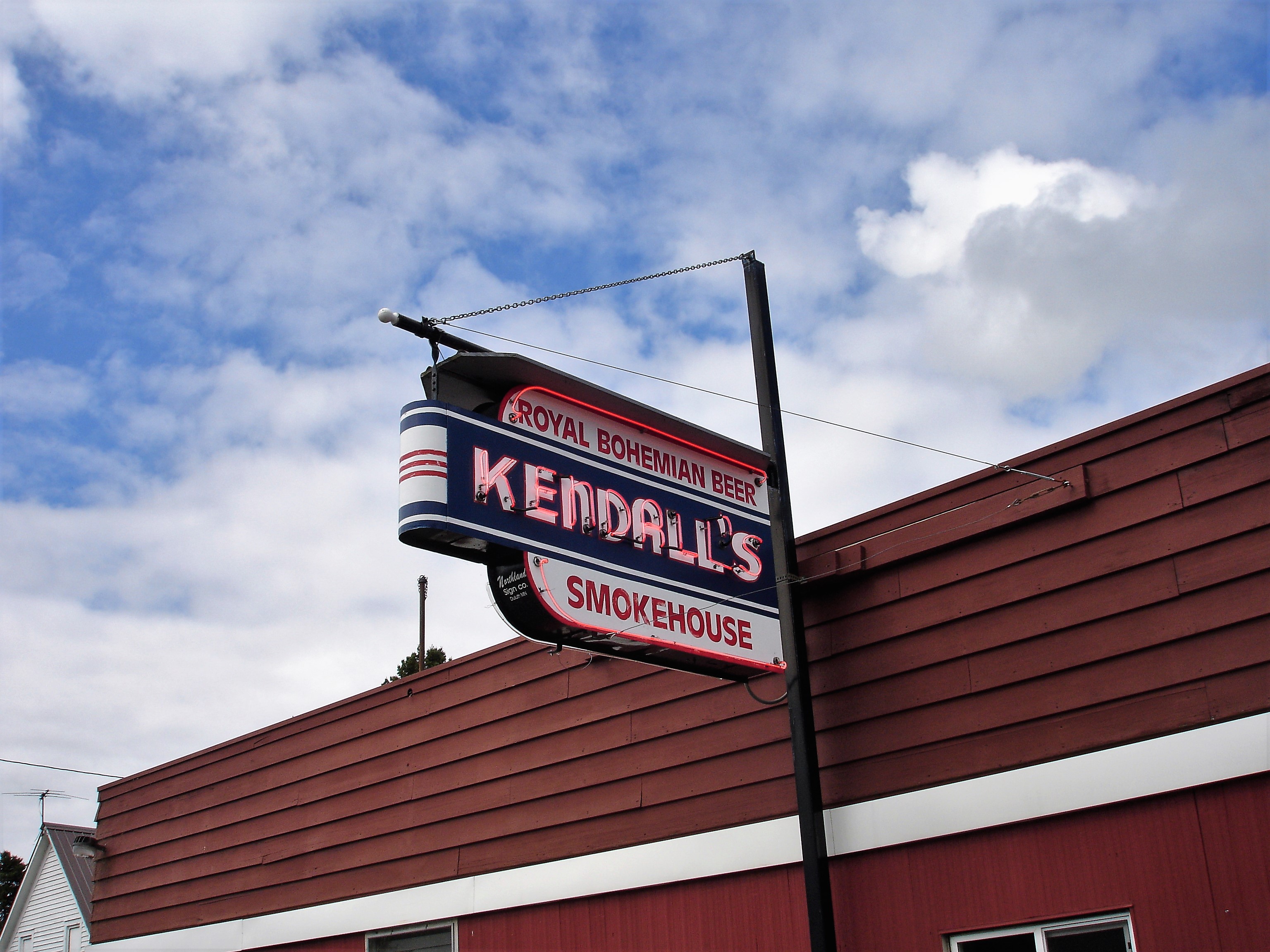 When was Royal Bohemian last brewed?