We love traditional Tuscan dishes prepared in the traditional manner, but we are also impressed with the lightened preparations served at La Solita Zuppa, a small and popular Chiusi spot run by the Gallicly puckish (but Italian, we believe) Roberto and Luana Pacchieri. The day’s unwritten menu is recited with great enthusiasm by Roberto, in English if you prefer; they especially try to make non-Italians comfortable here. 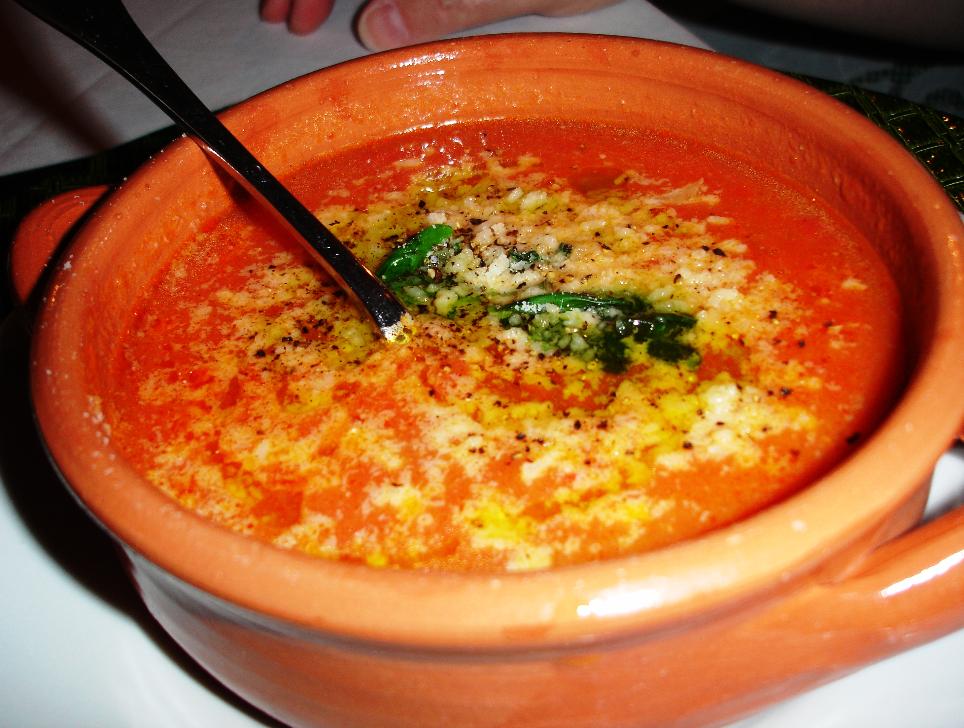 Tomato soup with farro, while way better than Campbell’s, would not be out of place next to a grilled cheese sandwich in the U.S.

La Solita Zuppa means The Usual Soup, and if we understood Roberto correctly the restaurant’s name comes from a local Tuscan saying and is not meant to imply that soups are a specialty of the house. Nonetheless, the first courses lovingly described by Roberto included a good many interesting-sounding soups, and we ordered a tomato soup with farro (a type of whole-berry wheat that regularly appears in Tuscan bean soups). Excellent! 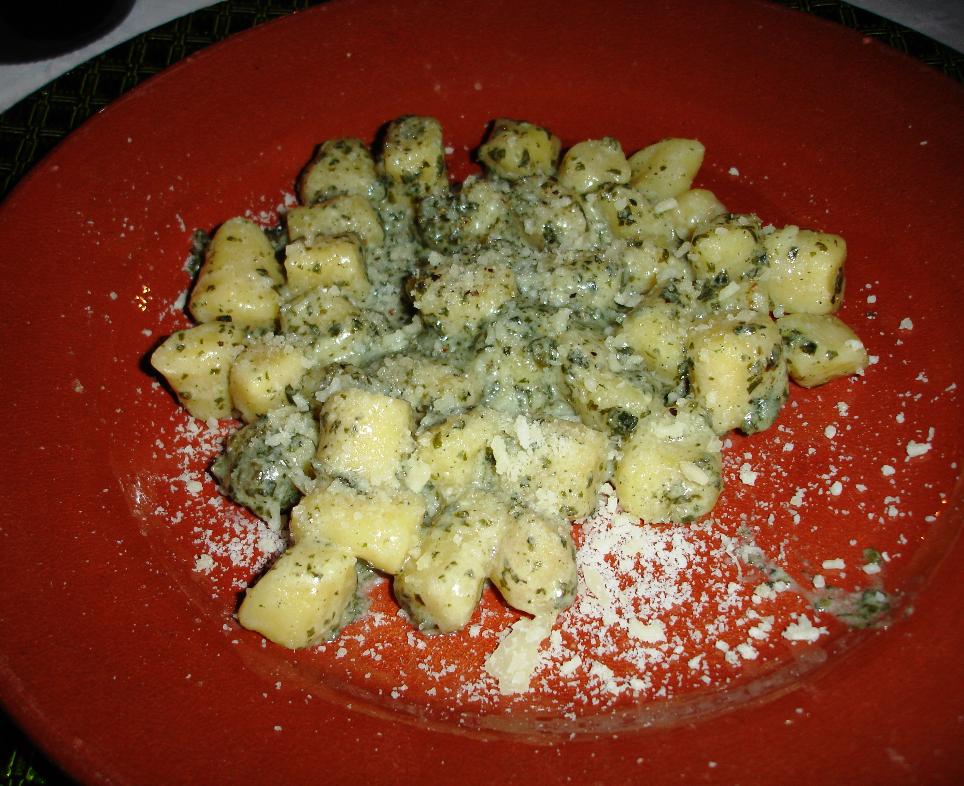 The finest gnocchi we ever had was made many years ago at the long-departed NYC restaurant named Arqua. These were closer to the ones we make at home, but they were dressed with good oil and basil and cheese.

We also had some gnocchi in green sauce; the little dumplings were chewier than our homemade attempts at gnocchi, which is to say quite chewy, but the sauce and cheese did their best to compensate. 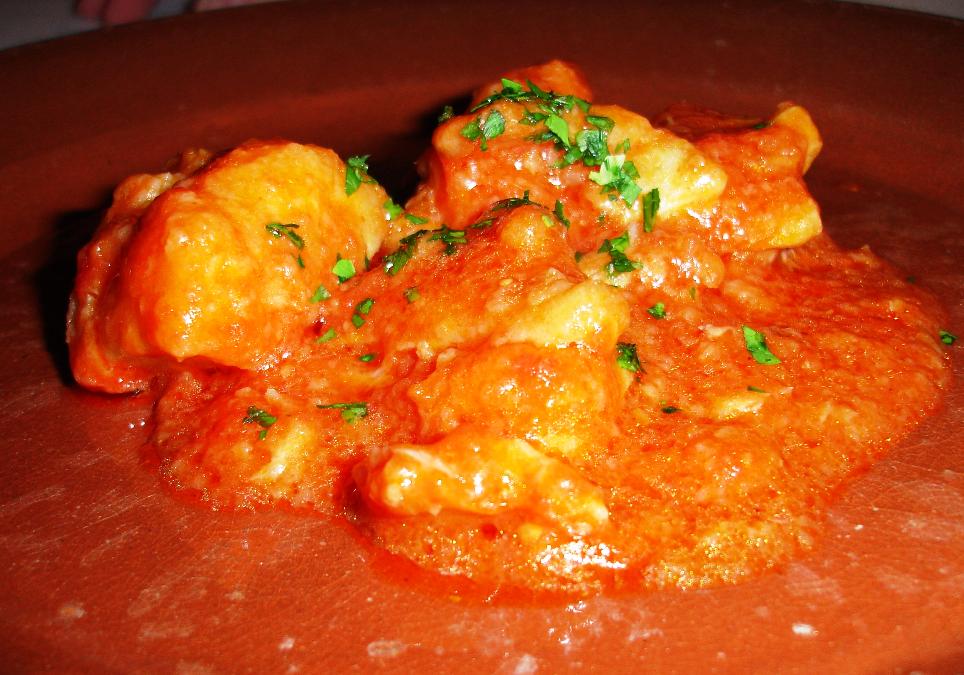 Seafood does not play a major role in Tuscan cuisine. The exception that proves the rule is baccala (salt cod or the similar stockfish), a dried salted cod that’s reconstituted and often served fried or in stew-like preparations such as this one with tomatoes.

Roberto suggested we try some summer ribollita as an antipasto. Unlike the typically thick, wintry-tasting cabbage/bread porridge, this version was more like a bread salad, served cool, with bits of crisp raw onion and sweet bursts of currants laced throughout. If you permit him, Roberto will orchestrate your meal with a glass of wine to complement a dish here, a little bit of a specialty there, most of which you will pay for. Prices are very reasonable, and his suggestions are spot-on, so we suggest you go along for the ride. 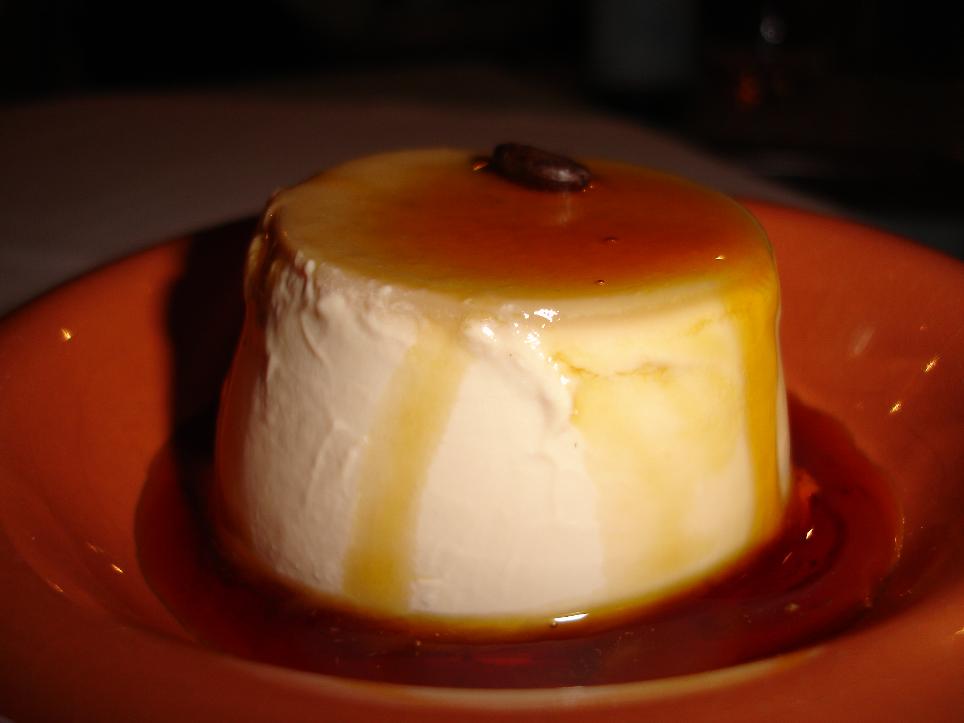 The exquisitely creamy panna cotta with caramel sauce was one of the meal’s highlights.

We had some wild boar cooked in Montepulciano (the wine, made a few miles north) and baccala in tomato along with a very decent house red from Montalcino (also a few miles away), and Roberto brought some contorni of mixed cold oiled beans (white beans, ceci, and lentils), fried potato chunks, and cabbage. Desserts of a sour cherry tart with a glass of vin santo and a coffee panna cotta with caramel sauce accompanied by a glass of sweet sparkling wine rounded out our meal. Other than the dense gnocchi, all was terrific. 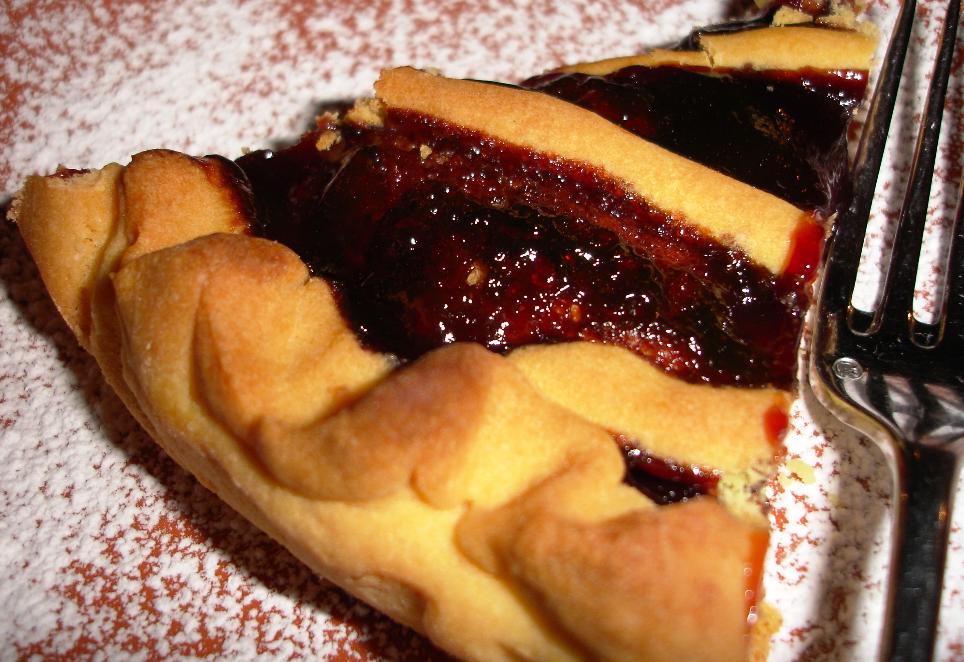 The cherry tart was made with a cookie crust that would do quite well on its own. This is similar to a linzer tart.

La Solita Zuppa doesn’t represent Tuscan cuisine at its most typical, perhaps, and it is no secret to discerning tourists, but the thoughtfully prepared dishes and welcoming spirit make it well worth a visit, perhaps especially so as a first Tuscan meal for the those who want to ease their way into Italian life slowly (although, in fact, it was our final meal in Tuscany). 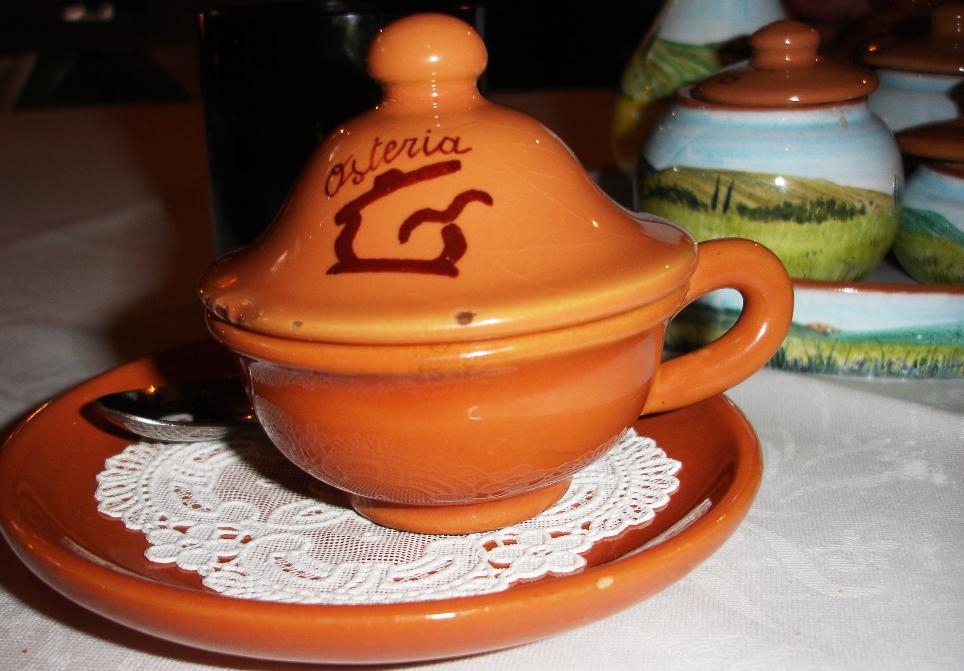 Little cups of espresso come with covers, along with a small dish of whipped cream, no doubt to accommodate those Americans who had been warned against asking for an afternoon cappuccino. 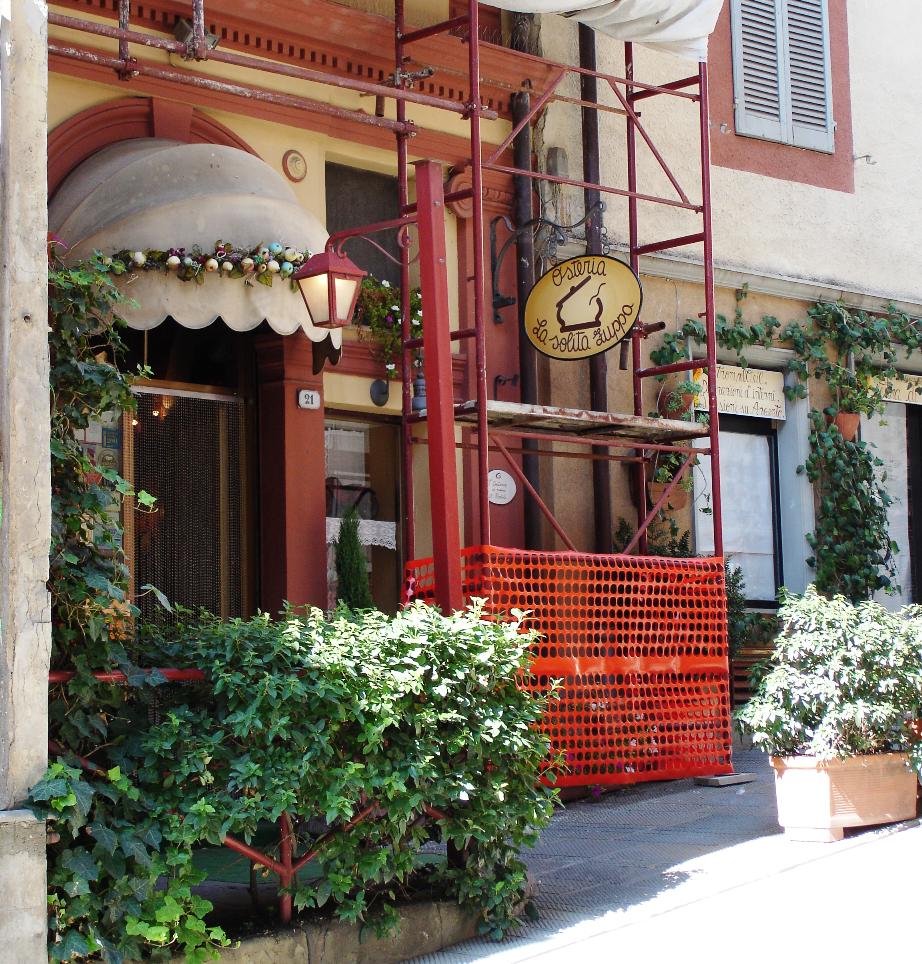 La Solita Zuppa is a small gem of a café on a steep hill in historic Chiusi. 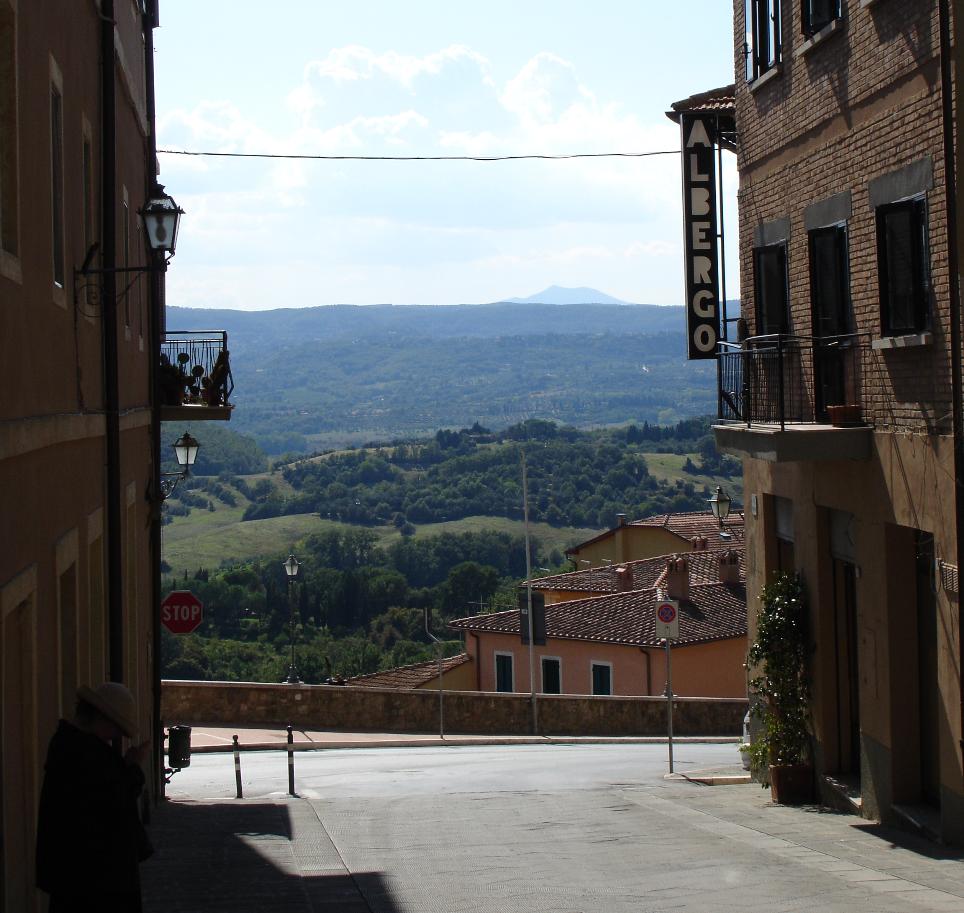 As you head down the hill from La Solita Zuppa, you are greeted with a stunning view of the southern Tuscan coutryside.