Migas, a savory amalgam of eggs scrambled with torn bits of corn tortillas and perhaps some combination of chiles, onions, tomatoes, cheese, and/or meat, is the breakfast dish of Austin. Its fame is justified, and no visitor to Austin should neglect it, but even more popular, if less glamorous, is the breakfast taco. 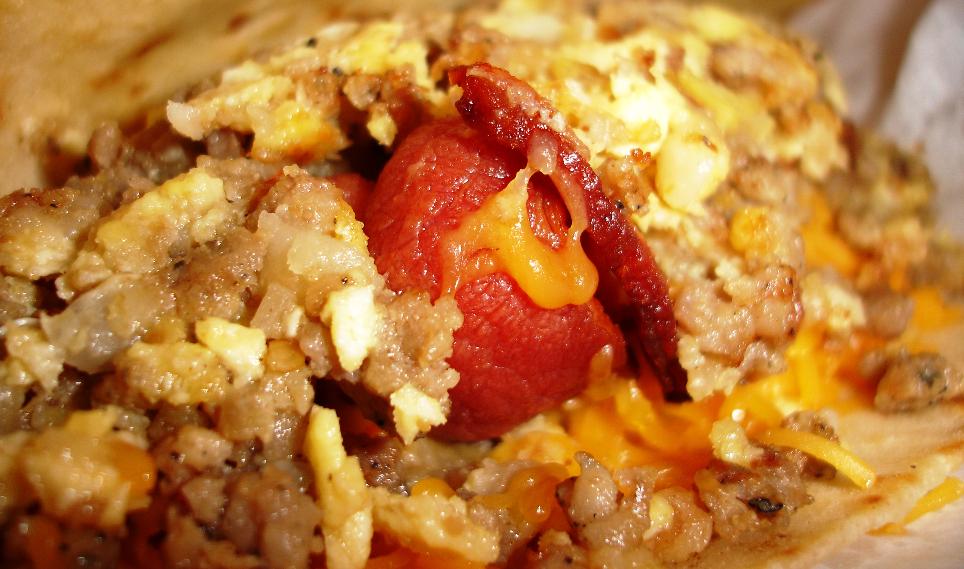 The Fattie is filled with potatoes, eggs, bacon, sausage and cheese.

No doubt much of the breakfast taco’s appeal has to do with its very modest cost, and its eat-on-the-run portability. Breakfast tacos tend to have a fast-food quality about them, mostly because of the dull-but-sturdy commercial flour tortillas wrapped around them. Tacos made with homemade tortillas are rare indeed, which is one of the reasons we love Helen’s Casa Alde. 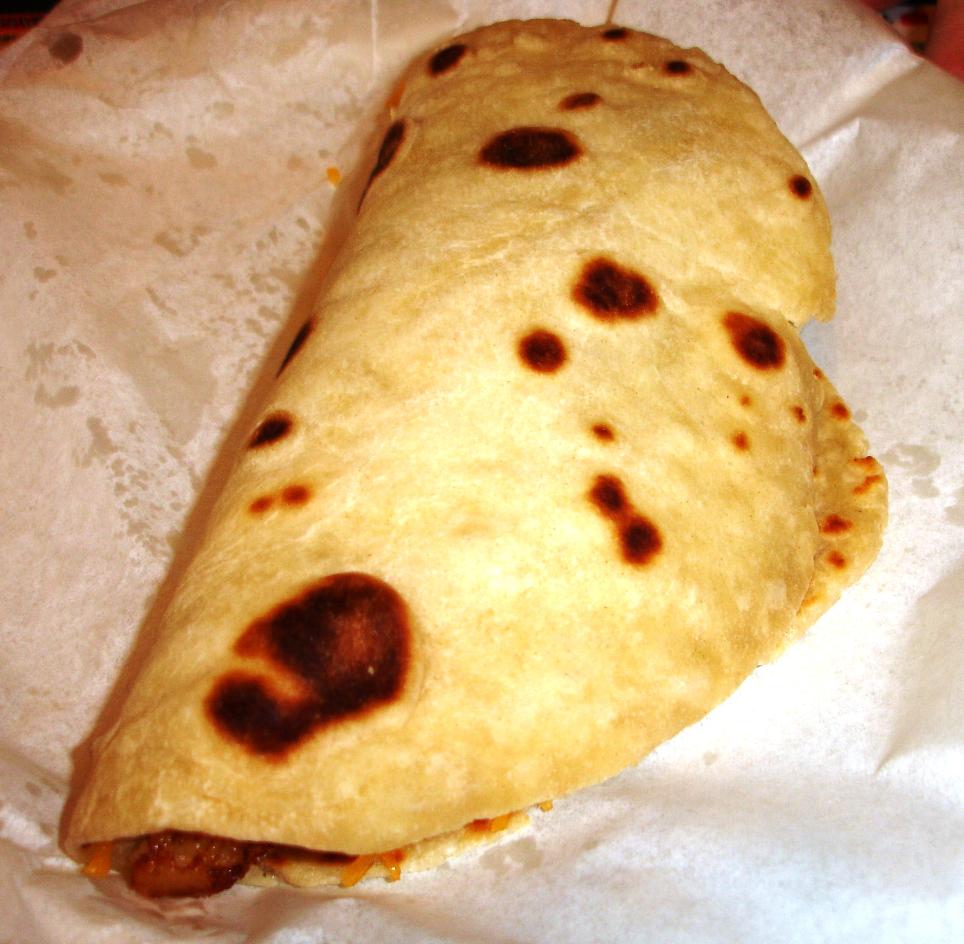 Whether you get a Fattie or The Same, your breakfast will come wrapped in a big, fresh, homemade tortilla.

Helen makes her flour tortillas each morning, and they make a fragrant and comforting fresh-bread mitt for her two signature breakfast tacos, The Fattie and The Same. The Fattie holds potatoes, eggs, bacon, sausage and cheese, while The Same contains potatoes, beans, bacon, and cheese (no eggs). The Same? What’s that about? It seems Helen had a regular customer who ordered the same thing every time. He’d plop down in his seat and call out “the same!” And a menu item was born. 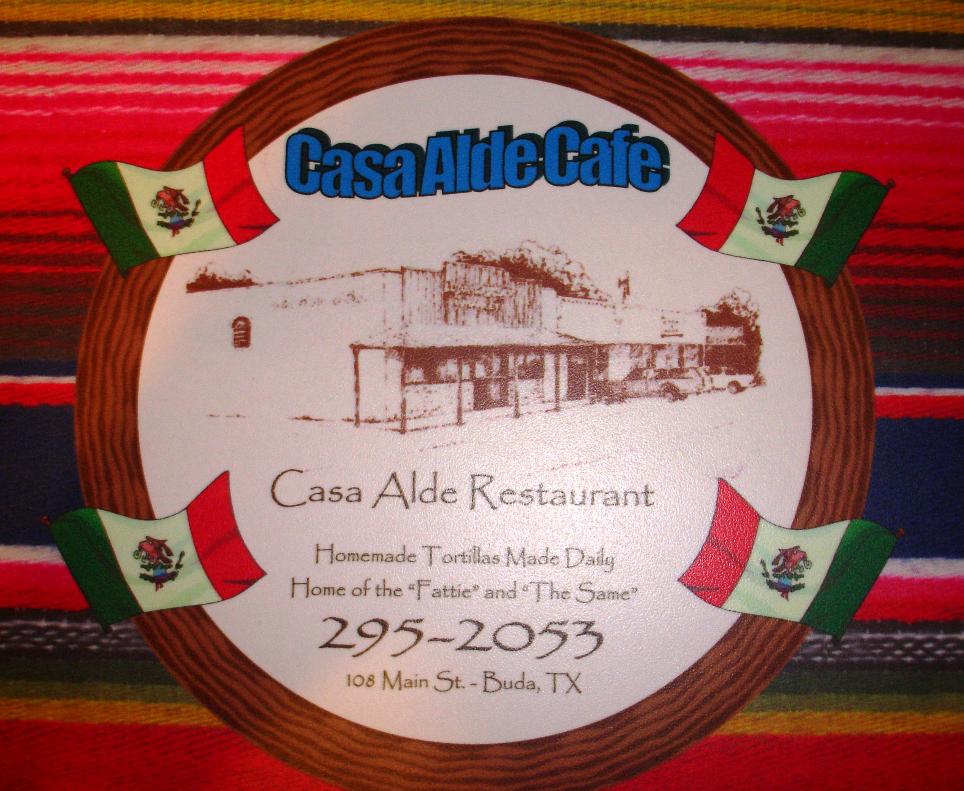 When we placed our order, our waitress (Helen’s nephew’s wife) confirmed “just the one for each of you?” When they arrived, we had to wonder who was eating more than one. They are huge! The fillings are not composed of artisan-level ingredients (we think the potatoes may be smashed-up tater tots) but that’s no matter. The combination of breakfast foods wrapped in these thick, warm tortillas is a positively terrific way to start the day, especially after they’ve been dabbed with a little of the fresh salsa served alongside. The tacos are a bargain at under three bucks a piece. 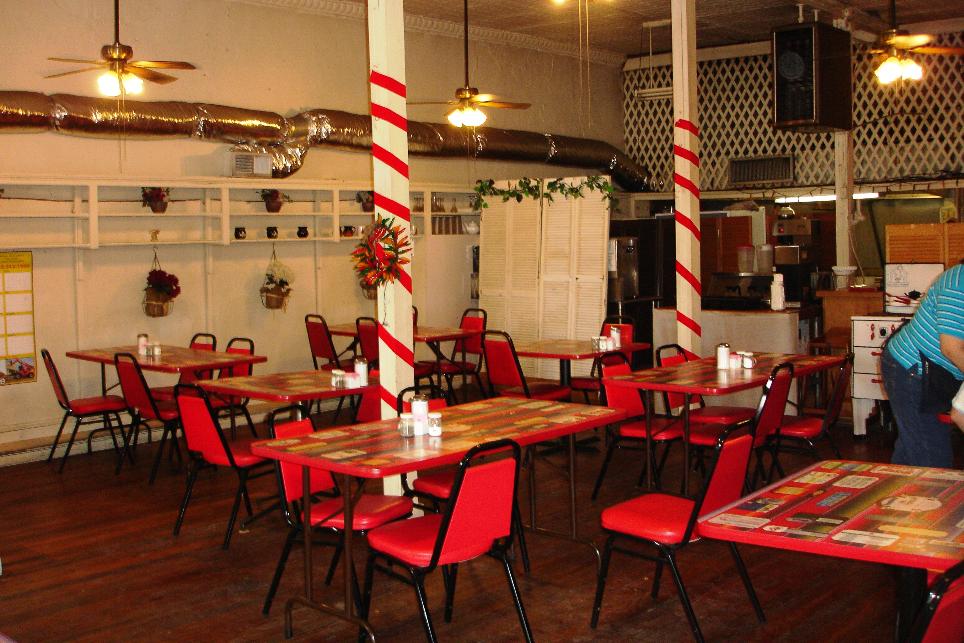 There are plenty of other tacos to choose from on the breakfast menu, along with omelets, pork chops, pancakes, and things like barbacoa or chicharron and eggs, and migas. The lunch menu features chicken fried steak, enchiladas, fish tacos, and more of that barbacoa. There are even BLTs and ham sandwiches, for when you’re dragging a Southwest cuisine-averse friend here. And an order of Tater Tots is only $1.75! 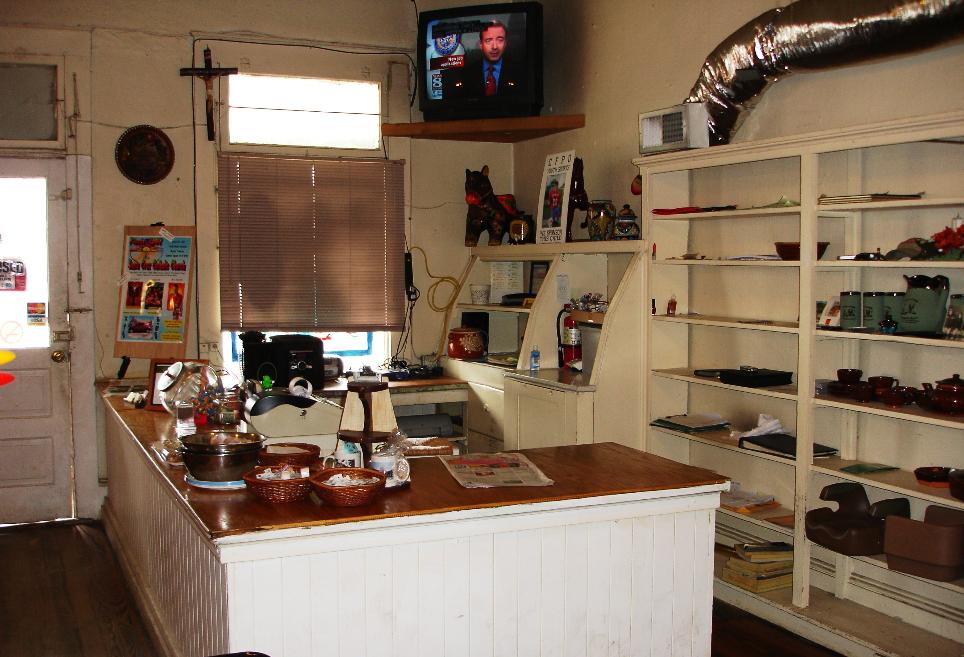 Pay your check on the way out, and maybe get a few cookies for the road.

Casa Alde is a town lunchroom in the century old former Buda General Store, with eye-high open shelves along one wall, the opposite wall adorned with a painted mural, an old red-and-white stove used for storage, and tables with local advertising permanently laminated to the surface. Local customers linger over coffee, chatting with the staff and each other. 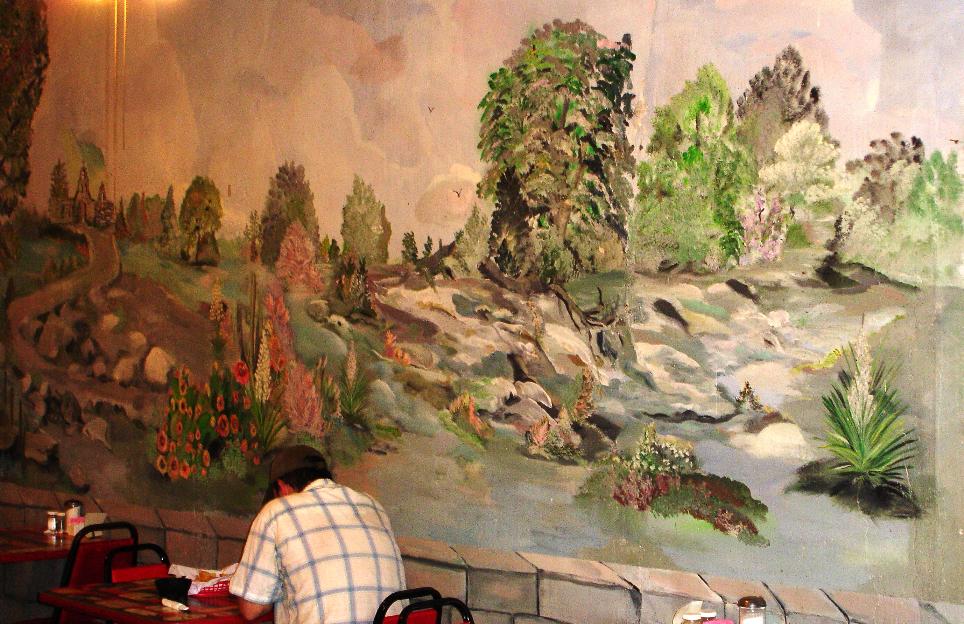 Dine alongside the banks of a country stream.

Helen’s is located in the town of Buda (pronounced not like Buddha, but rather like the beginning of the word beautiful), along a stretch of Main Street stores that have an “old-Texas” charm. As we chatted with Helen outside her café after breakfast, she pointed out the modern and spiffy town hall across the street, and noted that her son was the architect. And she urged us not to miss the Wiener Dog Races happening in Buda that weekend. We took her advice and popped in to the festival before our Sunday flight. Unfortunately, we had to scram before the finals. 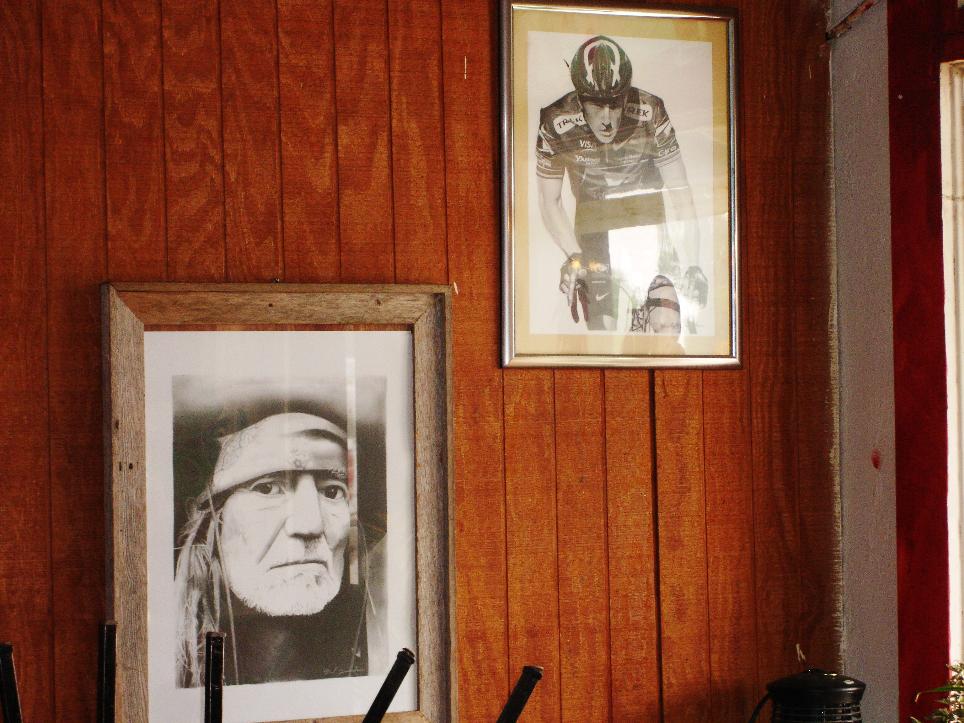 The adjoining room is graced with the portraits of two Austin folk heroes. 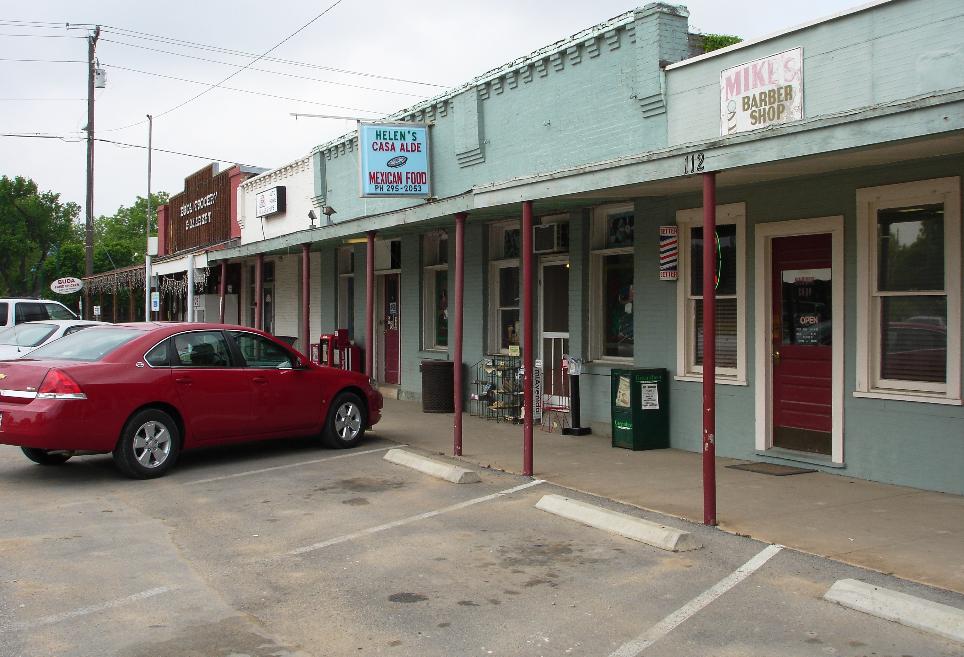 Casa Alde is situated along an historic stretch of Main Street in downtown Buda.

BEST THING TO EAT: The Fattie