As we take our first bites out of our good cheesesteaks from Campo’s we are reminded once again of one of our basic street food tenets. For hoagies, subs, heroes, or whatever you want to call the torpedo-shaped cold cut sandwiches, we want the best bread available, with good chew and well-developed flavor. For hot torpedo sandwiches like cheesesteaks, veal parm heroes, or roast pork rabe, we prefer the bread to be less assertive. 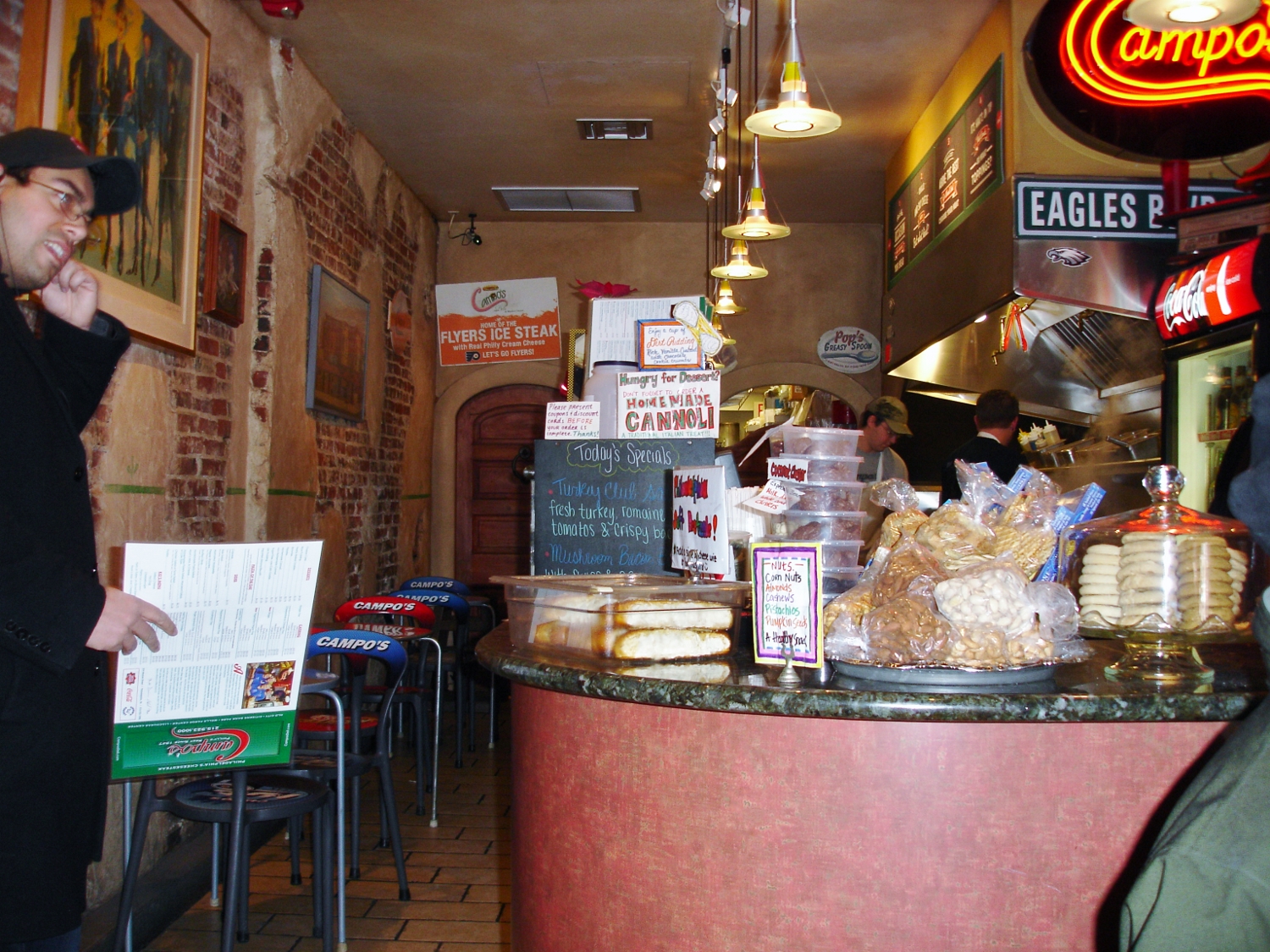 We haven’t tried them, but we have to give extra points to a cheesesteak joint that offers homemade cannoli!

Oh, the bread has to be good and fresh, sure, but it should play a supporting role, both figuratively and literally. It has to retain structural integrity as a mitt for the hot, juicy stuff within, yet it should not offer so much jaw resistance that every bite sends the ingredients slithering out the cut edges. But our objection to artisan-quality bread goes beyond those practical considerations. We feel that the flavor and interest of the sort of bread we love to eat by itself somehow short circuits the enjoyment of a hot sandwich. Maybe that’s just us. Is it? 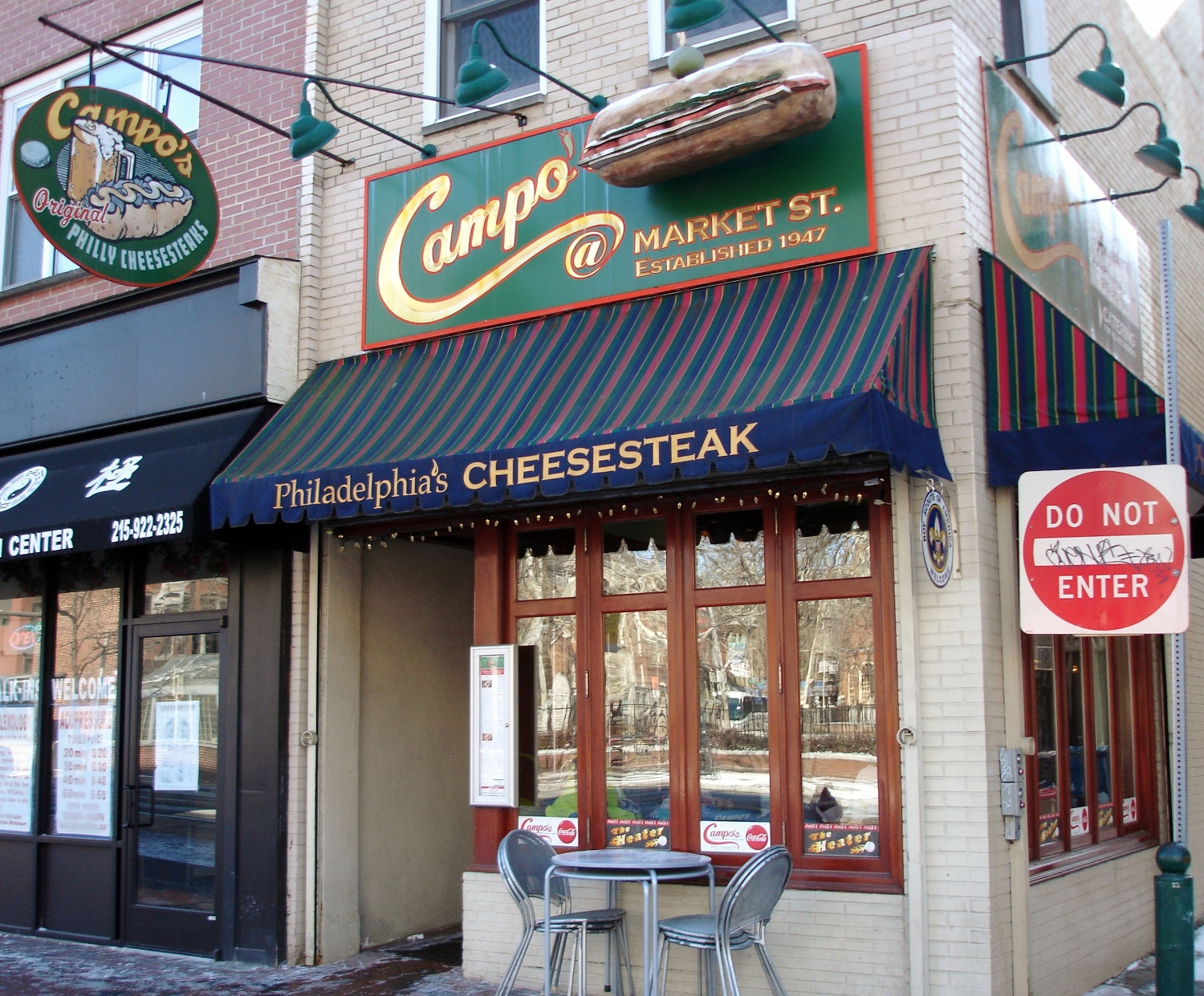 One small issue with Campo’s Market Street location: if you’re driving you’ll likely have to park a block or two away and feed a meter.

So the fact that Campo’s Deli wraps its beef and cheese with the good rolls from Liscio’s (some places on the web claim Campo’s uses Sarcone’s but we doubt that) in South Philly is admirable but, for us, it’s not quite ideal. Liscio’s bread, particularly when the crust is crunchy, is clearly better than Amoroso’s, so Campo’s hoagies, no matter what they put inside, have a head start. We feel, however, it’s just a little too good for the cheesesteak. If you don’t agree with our bread and sandwich philosophy you may find that Campo’s makes your favorite Philly cheesesteak.

Campo’s Deli is an old (1947) urban deli with Philly soul. The Passyunk razzmatazz of Pat’s and Geno’s feels like Philadelphia as filtered through a Hollywood lens next to the honest Philly of Campo’s. We’d like Campo’s if the food there was ordinary. But it’s better than that.

These cheesesteaks with the coarsely cut ribeye and ample large-dice onions are good Philly classics. It’s certainly not as juicy as a Sonny’s steak. The fact that we’ve never left the place saying it was one of the best cheesesteaks we’ve ever had is not really a knock. They turn out a solid, dependable sandwich that is rightly considered one of Philadelphia’s big dozen or so. One thing that’s missing, though, is a setup with hot sauces and peppers for those, like us, who like to tinker with their cheesesteaks. You can ask them to garnish your steak with the peppers of your choice when you place your order but it’s not quite the same.

And don’t forget that Campo’s is a deli, and cheesesteaks are just one of the arrows in their quiver. There are hoagies on that good bread, hot sandwiches of meatballs or roast pork, soups and salads, homemade mac and cheese, and freshly filled cannoli to boot! And, in nice weather, there are a couple of tables out on Market Street.

BEST THING TO EAT: Cheesesteak with Whiz and grilled onions