What’s America’s least-favorite vegetable? It’s hard to pick just one but certainly in the running are turnips, okra, Brussels sprouts, and rutabaga. We’d have included beets on that list until the last few years, which have seen an explosion of interest in the vegetable – beet salads with chevre and walnuts are on every other upscale menu today. 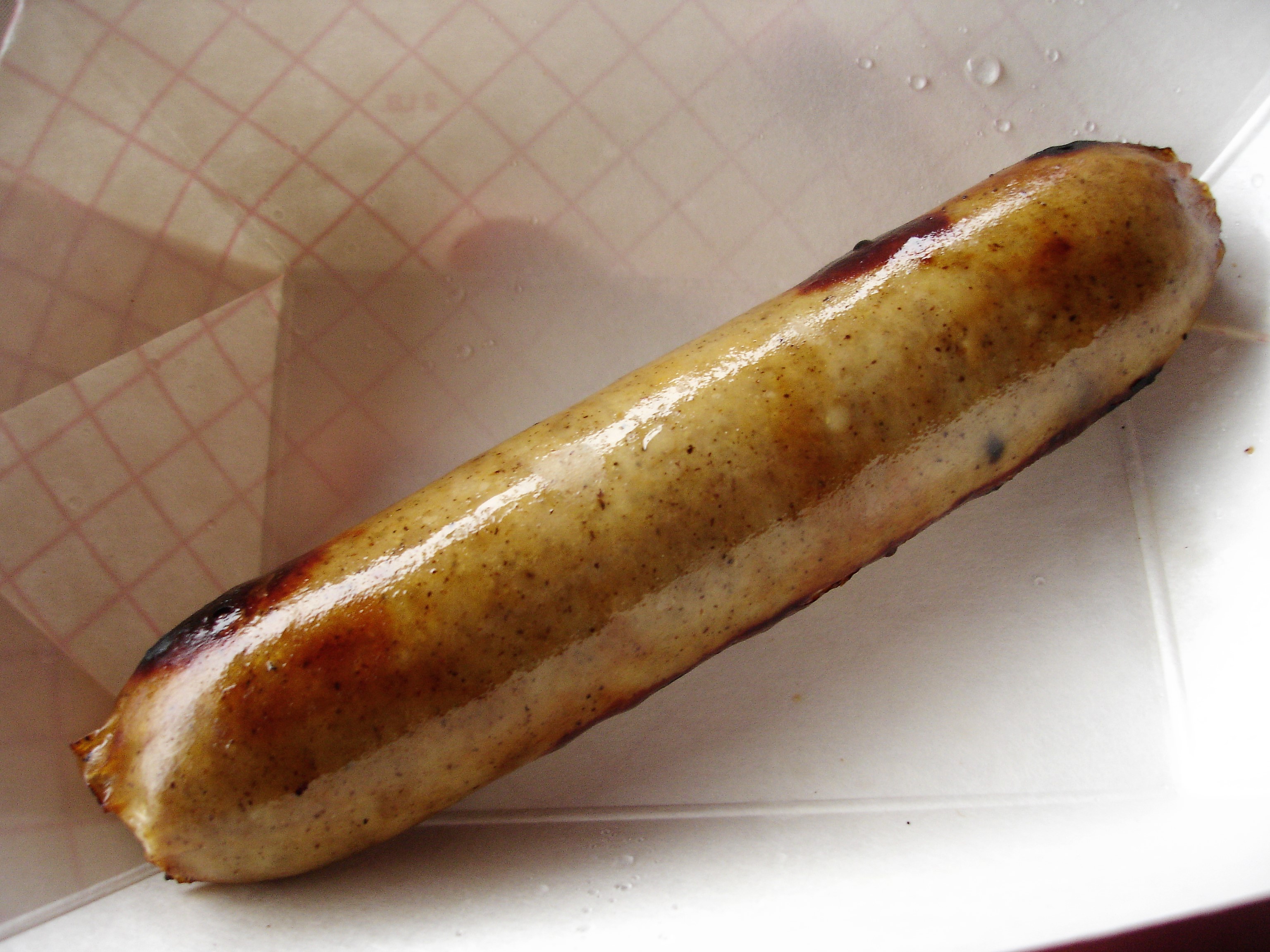 Rutabaga sausage had the subtle but distinct sweetness and earthy flavor of the vegetable.

Turnips show up around Thanksgiving, okra is a favorite in Louisiana, and Brussels sprouts, like beets, have had a resurgence of late (have you tried a well-made Brussels sprouts-topped pizza? It can be wonderful!). Rutabagas? They have not yet had their moment in the hipster spotlight and we doubt that day will be soon in coming. 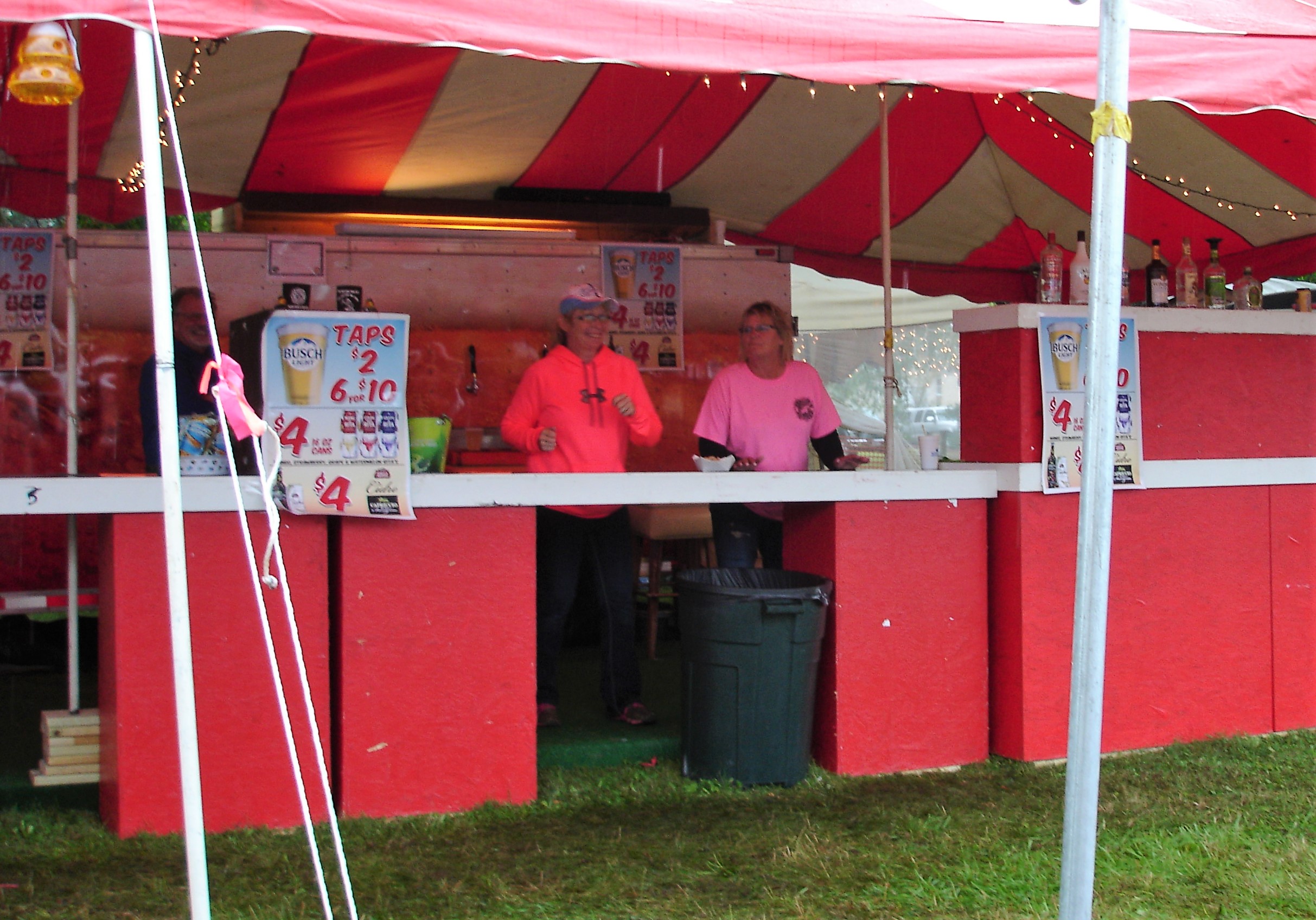 Cheap beer was available in 6-cup carriers for $10.

Rutabagas are something like a giant turnip and are perhaps even less appreciated. There is, however, one group of people who appreciate this wax-coated freak of a vegetable: Northern Europeans, Scandinavians in particular. In fact, another name for the rutabaga is Swede. If anyplace in America would hold a rutabaga festival, it’d have to be one with a Scandinavian heritage. Enter Askov. 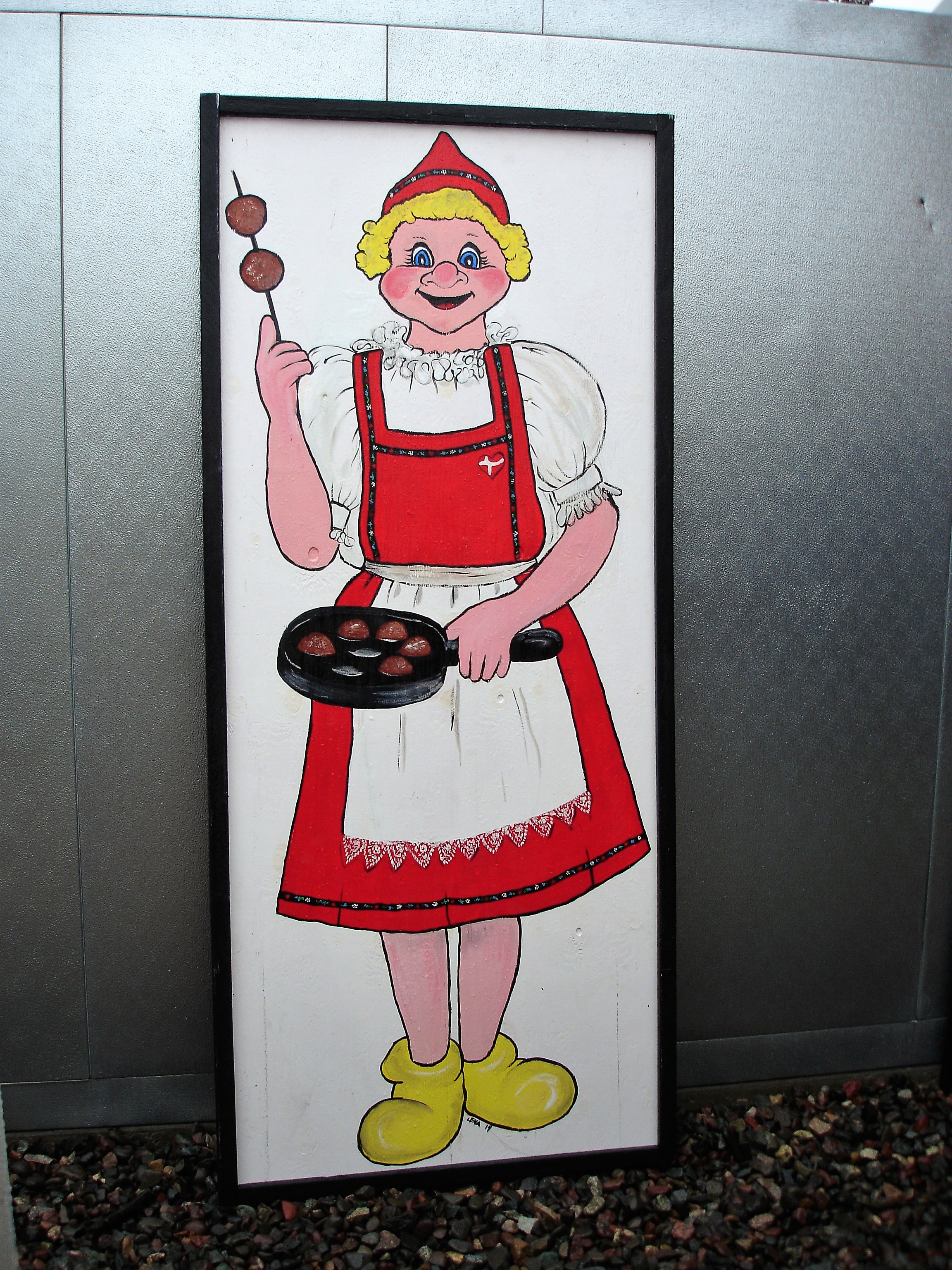 Æbleskiver are the star attraction of the festival.

The Minnesota city of Askov (population: 364) was founded by Danish immigrants in 1906. It soon became known as The Rutabaga Capital of the World, growing and processing a major portion of America’s rutabagas for decades. Then a huge fire destroyed the major rutabaga warehouse in town in the 1970s, an event which precipitated the decline of rutabagas in Askov. Today, rutabaga commerce in Askov is nonexistent but the city’s rutabaga identity remains intact, as does the almost 80-year-old rutabaga fest. 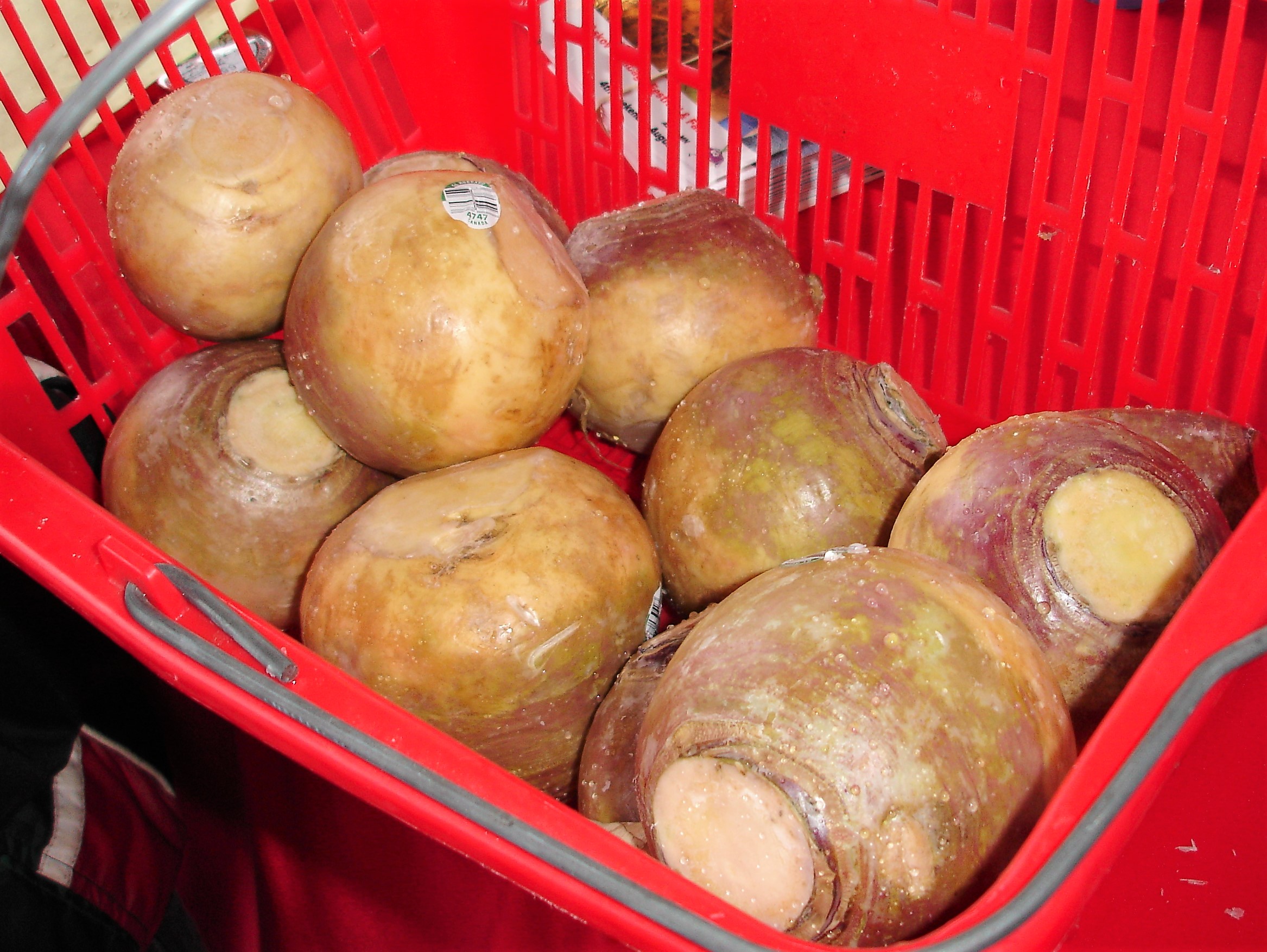 Rutabaga in all their wax-coated glory

As we drove to Askov in a steady rain we wondered if the shindig would be held and, if it was not postponed. if anyone would show up. Turned out that a little rain isn’t enough to kill the social event of the year – apparently, every Askov resident, as well as those in all the neighboring towns, turned out to celebrate the giant turnip! 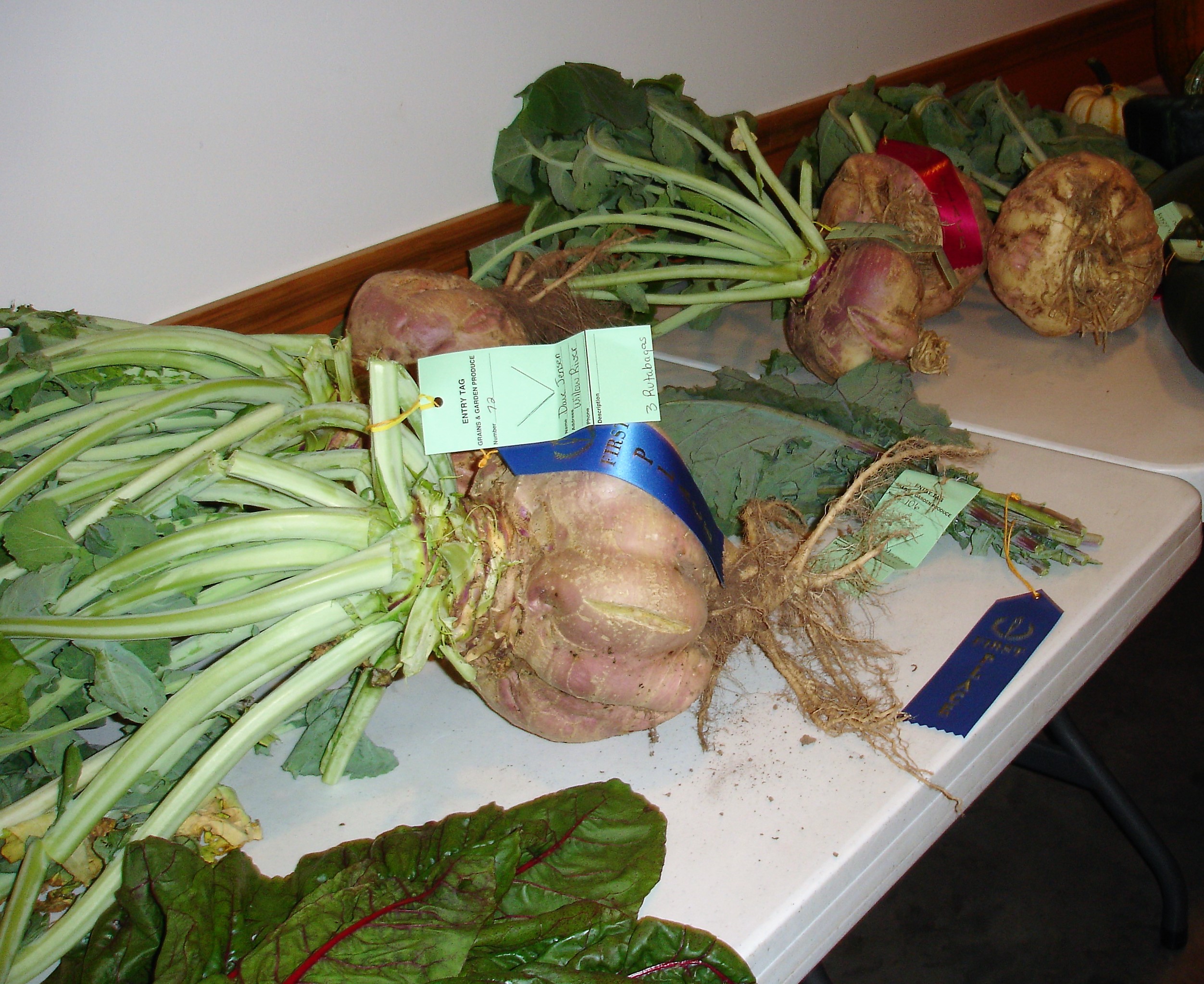 Check out the blue ribbon rutabagas at the community center.

Do they really serve rutabagas at the fest? Well, yes they do, but you have to look hard. The sole ready-to-eat rutabaga item available is something called rutabaga sausage. This is apparently a regular Danish-style sausage with the root ground into the seasoned pork mixture. And it tastes better than it sounds! The rutabagas lend the sausage a touch of sweetness and earthiness that is very pleasant. Much better than a novelty, although we don’t know if this is something that can be purchased outside of the Askov Rutabaga Festival. 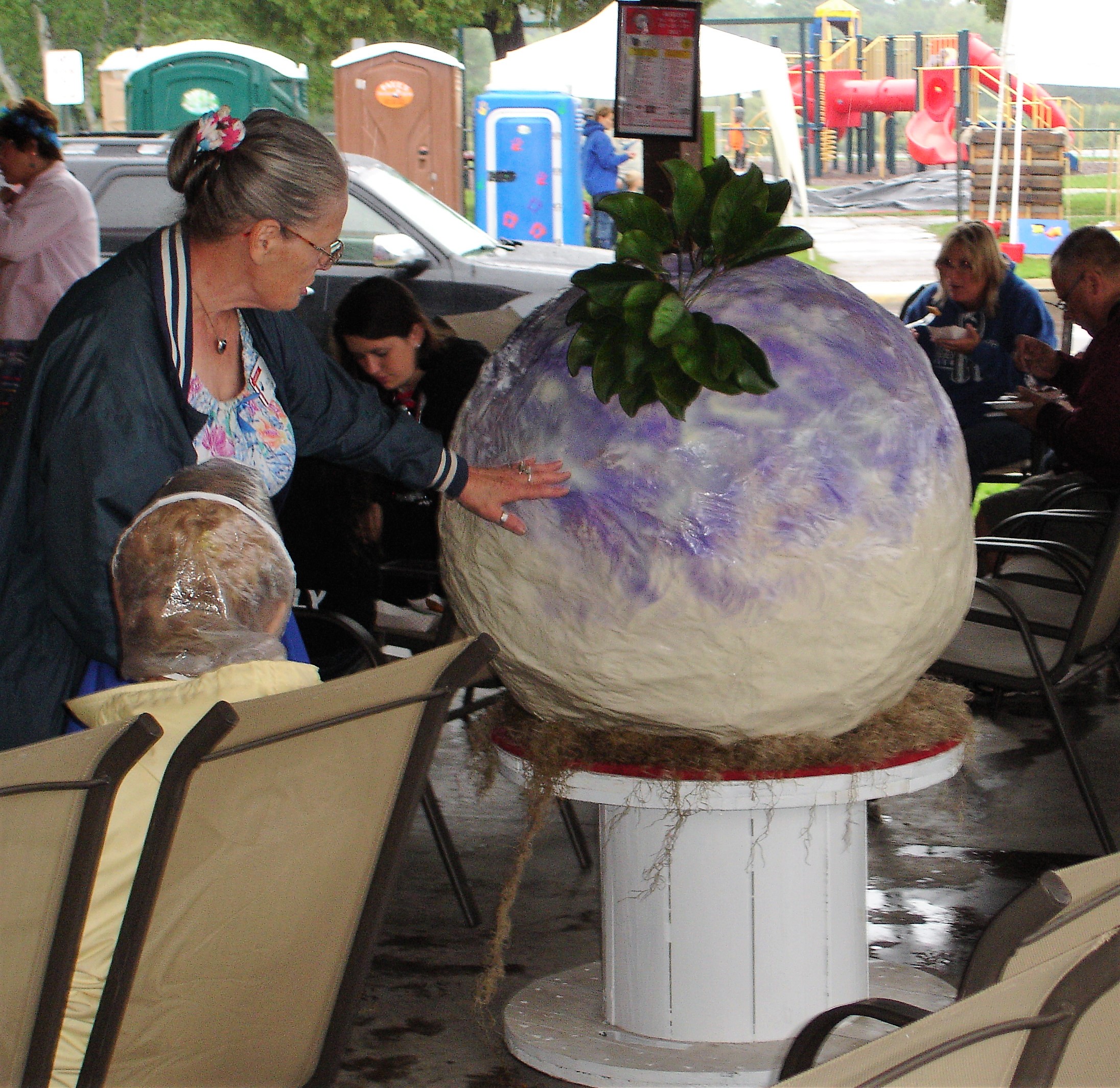 Gaze in awe at the rutabaga mascot.

If you head to the crafts area, you’ll find jars of rutabaga jam for sale. These we, unfortunately, declined to purchase, as our collection of jams and preserves from around the country is growing faster than our ability to consume them. We’d heard that a place in town, Lena’s, served rutabaga malts. We’d have definitely tried one but it turns out that Lena closes her place while she operates a craft stand at the festival. She serves rutabaga malts year-round but, evidently, the only time they are unavailable is during the rutabaga festival! 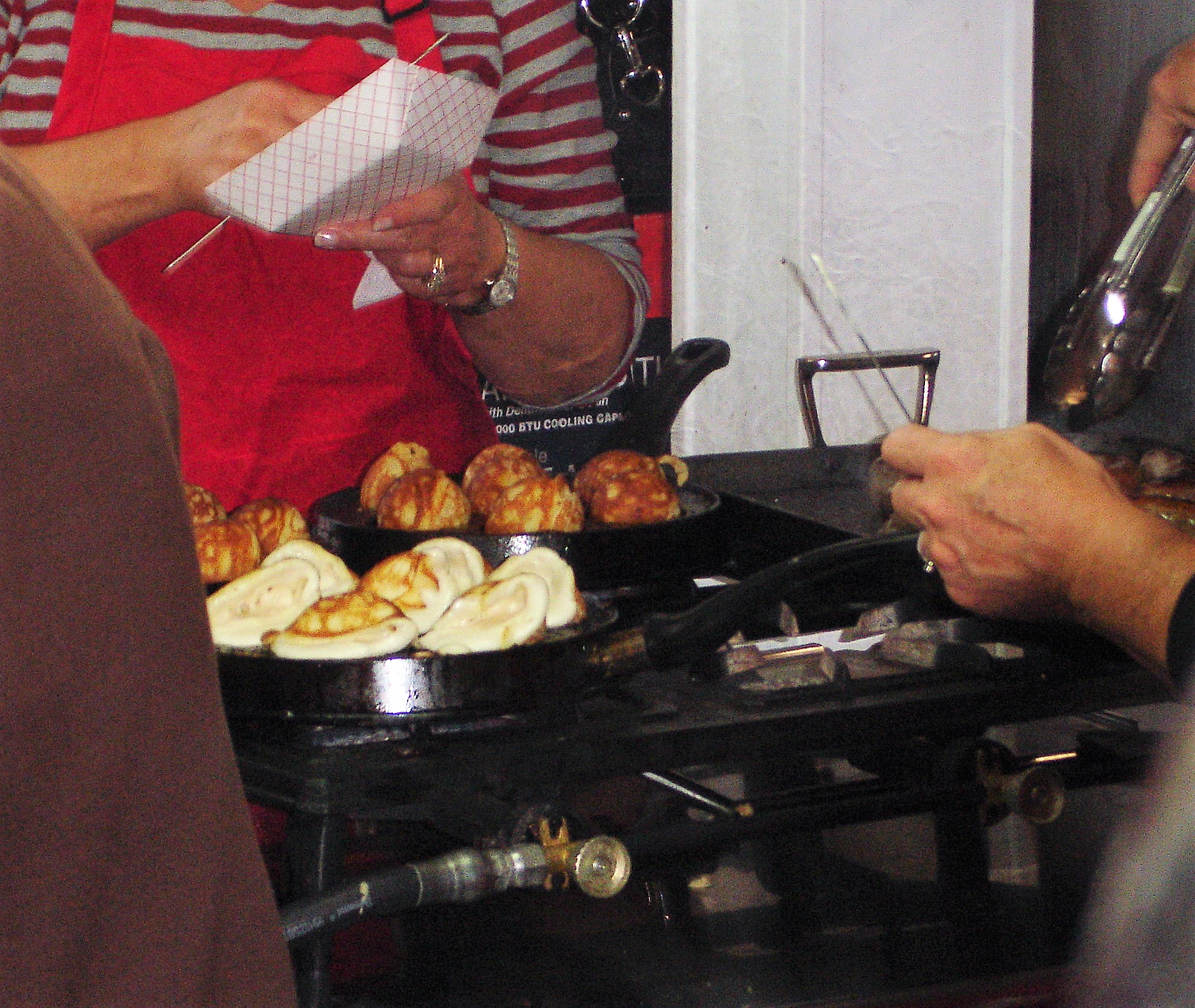 Æbleskiver cooks in action. The skewers are used to turn and lift the pancakes from their metal pans. 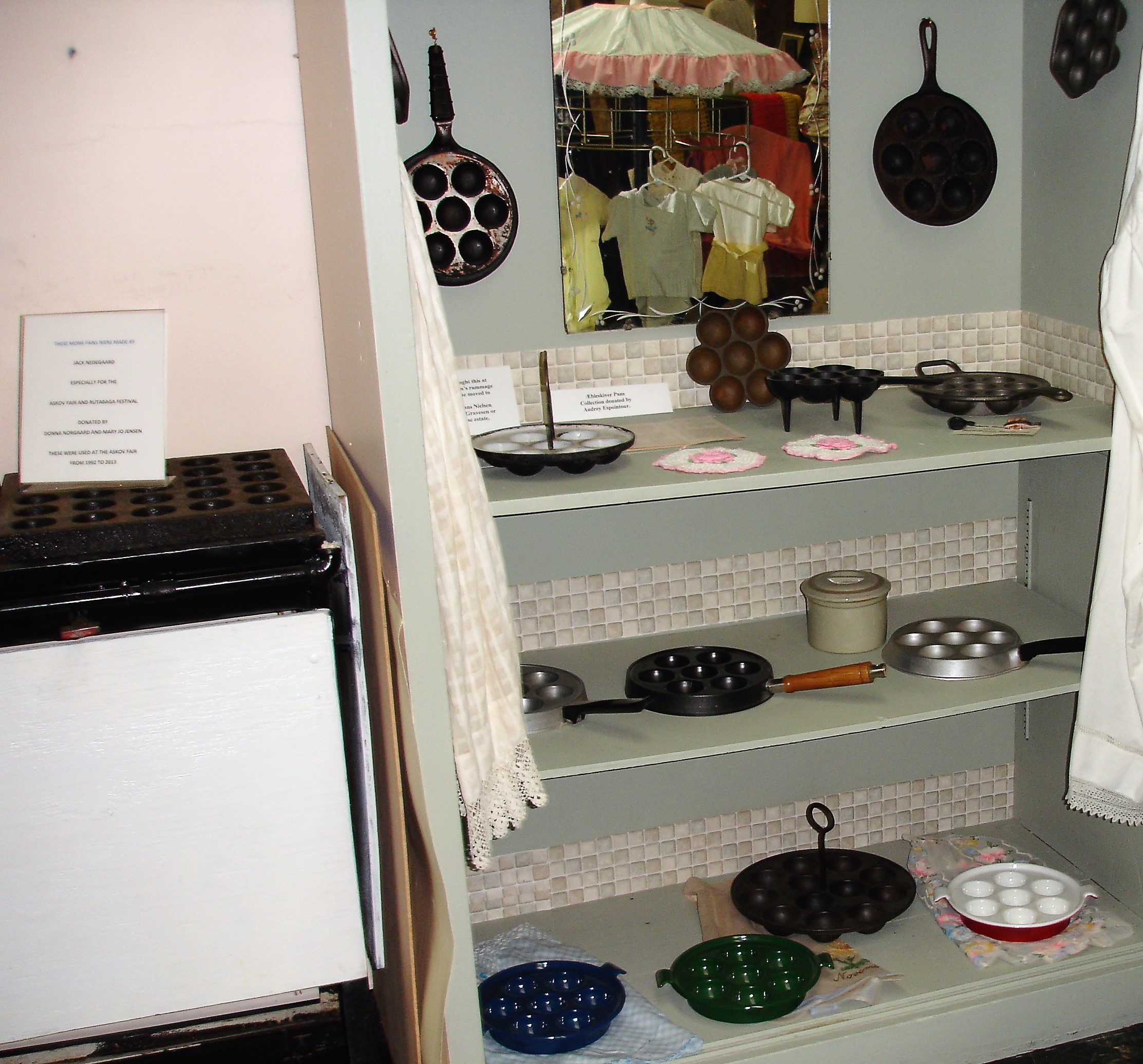 The local museum has a fine exhibit of æbleskiver pans through the years.

We loved watching the Askov women at work, mixing the batter with lots of melted butter and clouds of whipped egg whites, and baking and flipping the balls of batter. They served them plain or with strawberry and whipped cream topping. There were also self-serve pumps of pancake and blueberry syrups. 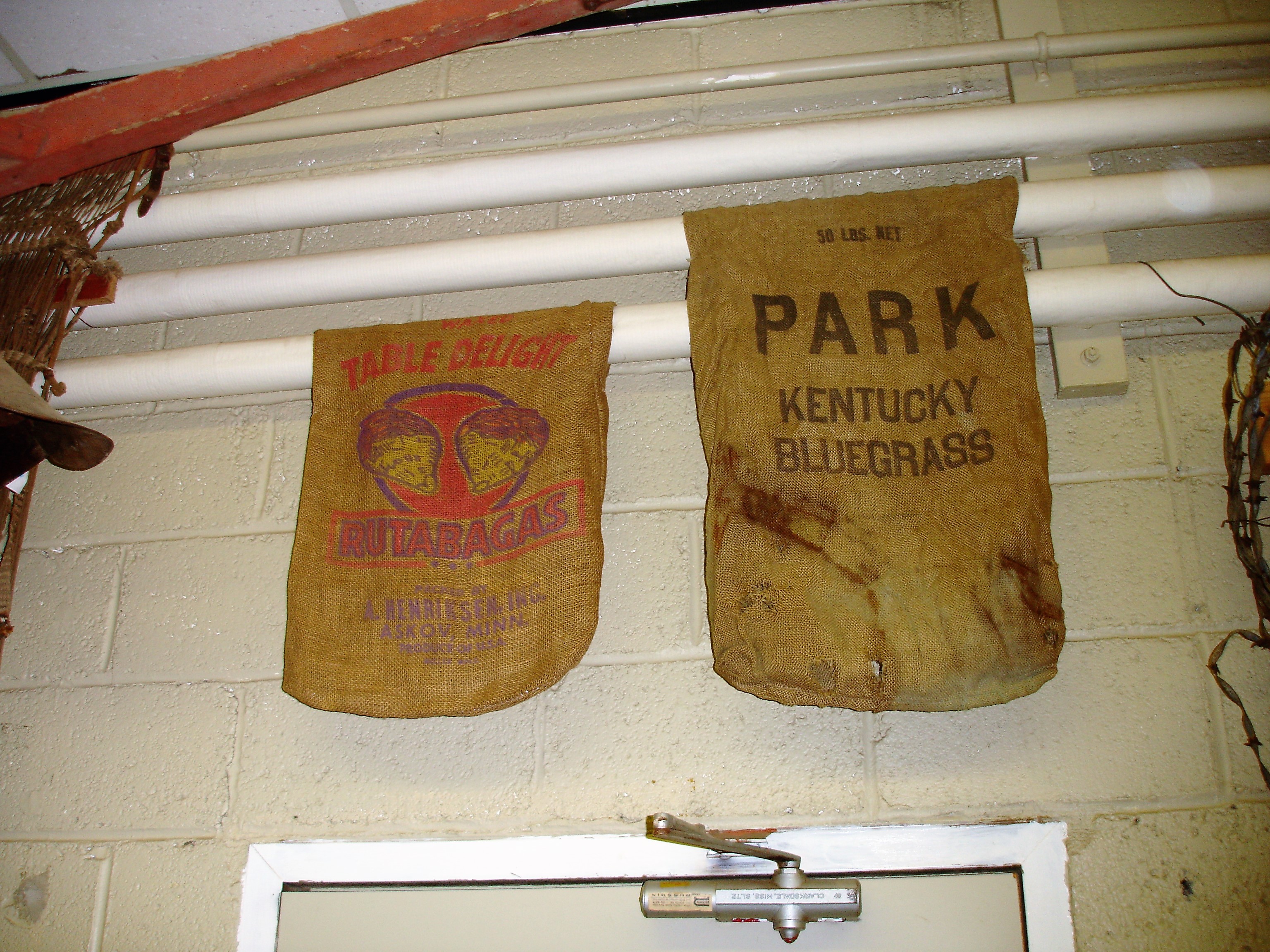 Rutabagas were a major crop in Askov until the 1970s.

We had ours without the strawberries and we added a small squirt of pancake syrup for the occasional dip. We loved the æbleskiver! They are something like a cross between pancakes and popovers, light of texture and rich-tasting. If we were not pacing ourselves we’d have gorged on these amazing spheres. We enjoyed ours with a side of medisterpølse, which is a mild, sweet-spiced Danish pork sausage (and which tasted very little like the rutabaga sausage). 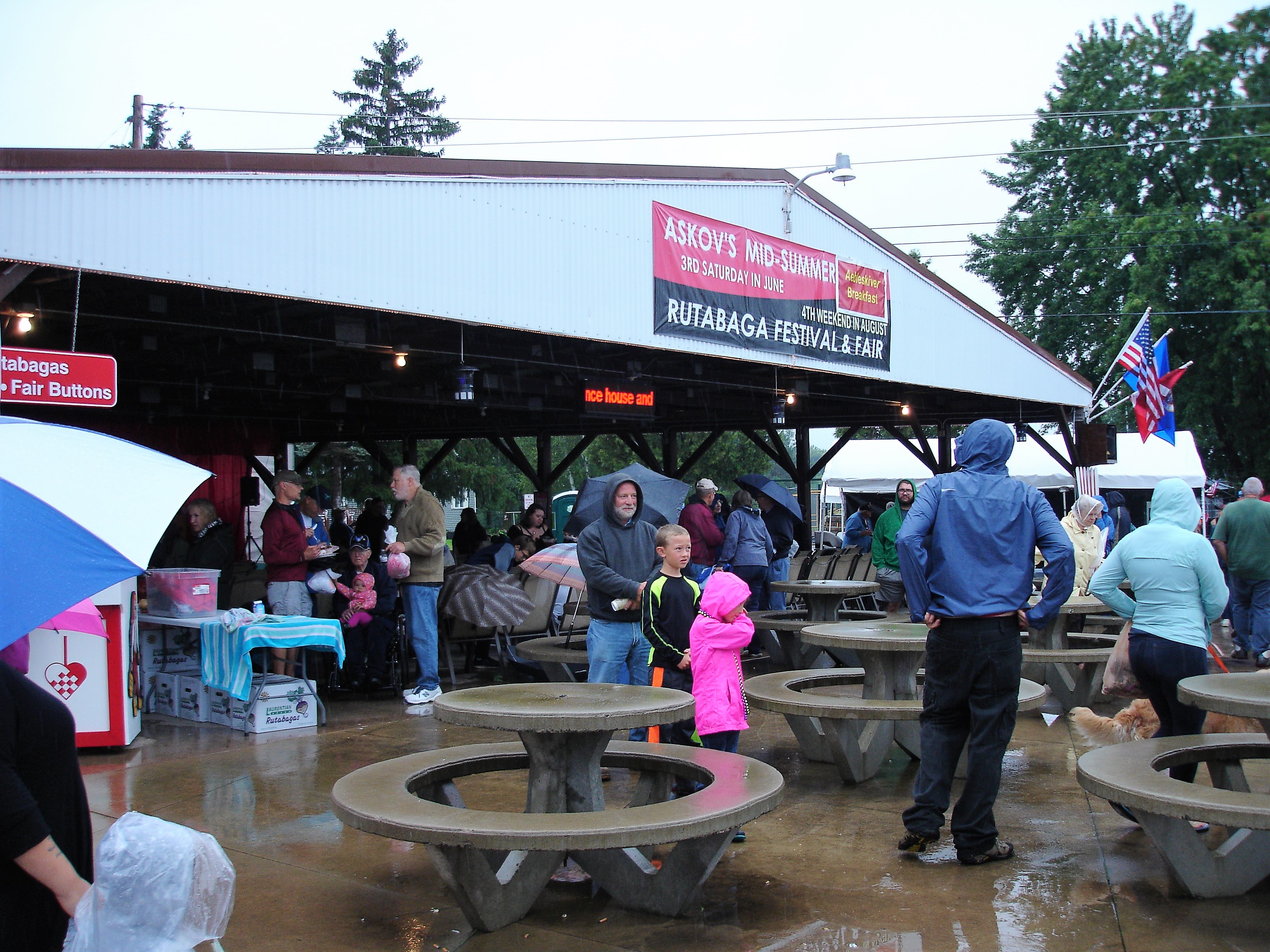 Rain didn’t seem to have an effect on the crowds at the rutabaga fest.

There was a 5K run/walk in the morning before we arrived, a parade which ended just as we showed up, a craft fair, a beer garden, bingo, live music, and square dancers. There were exhibits at the community center where one could marvel at the blue ribbon winning fresh vegetables and baked goods produced by the good people of Askov. 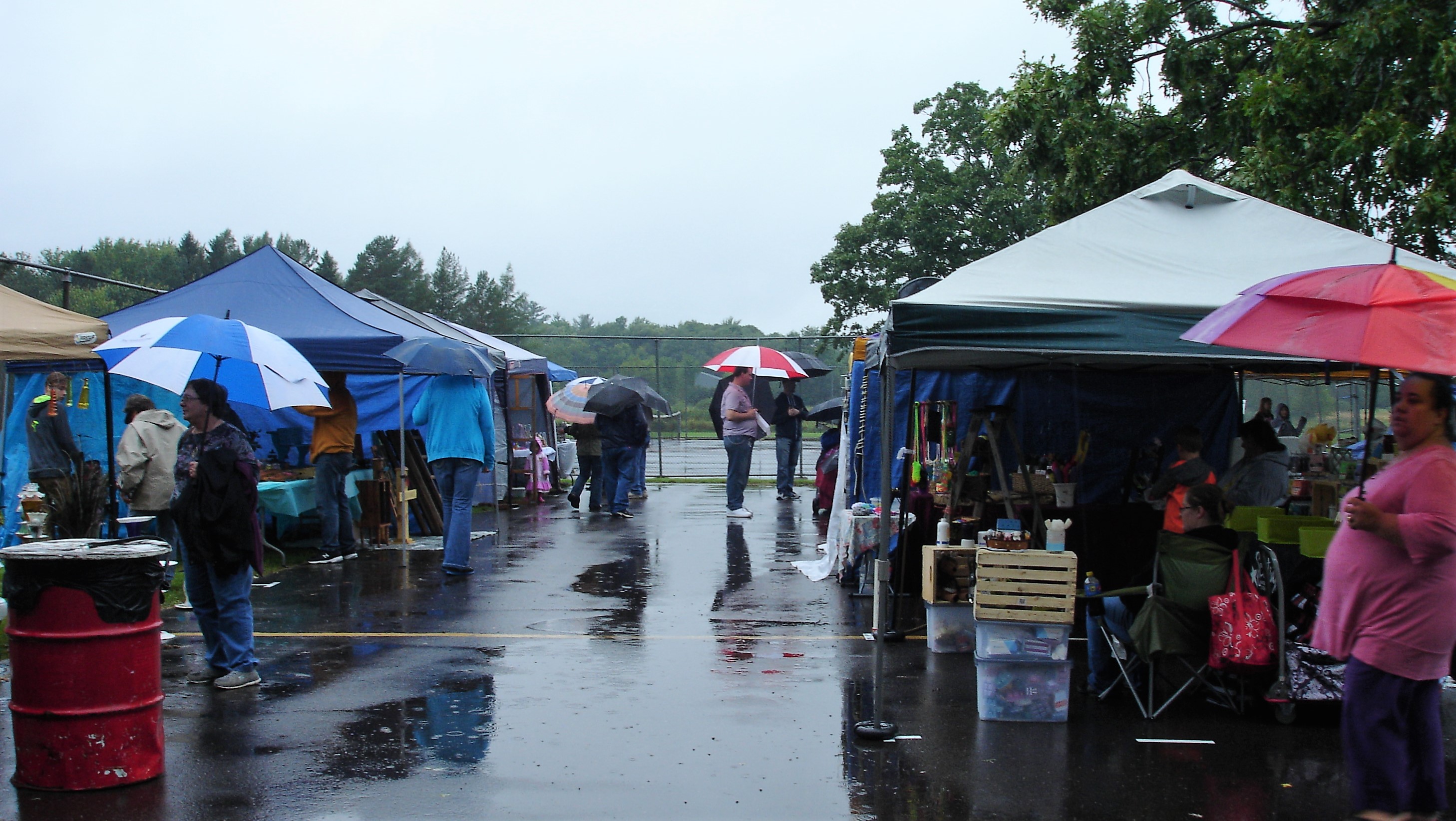 Rutabaga jam was available in the crafts fair section of the fest.

They had plenty to keep the kids occupied, like a bounce house, and there was also a fire department battle. The interpretive hike to Rutabaga Falls went on as planned despite the weather. While not part of the fair, the huge town museum was right in the center of the activity, and open, and we loved touring the place to gaze upon the collections of old dolls, a wooden-clad car, exhibits explaining town history, and even an old KKK outfit which was found in a local attic. 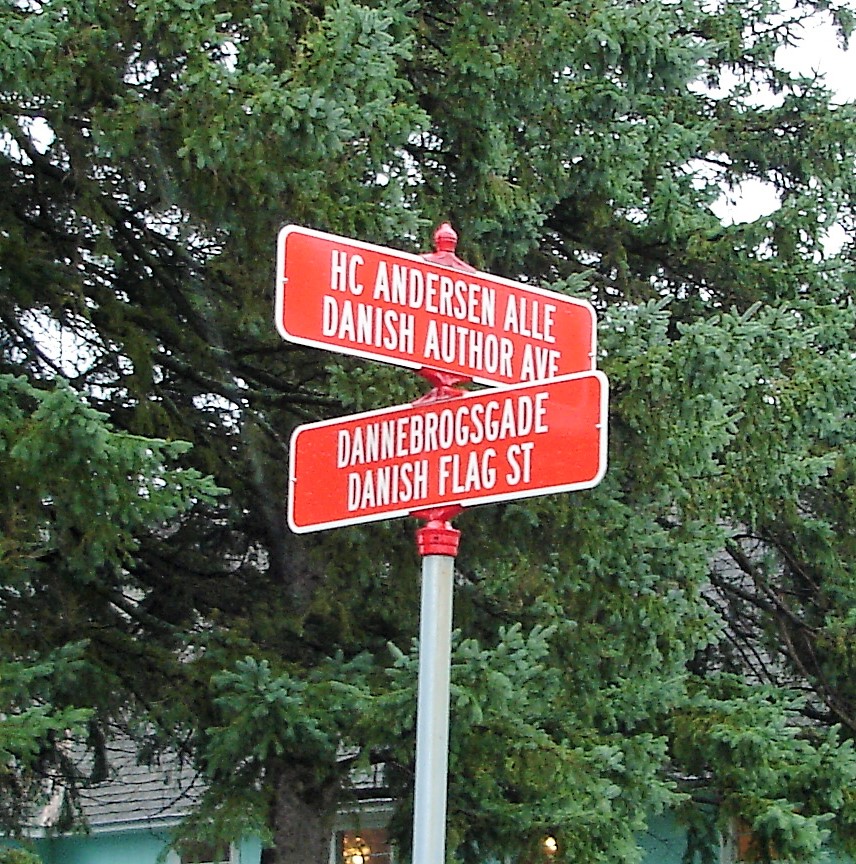 The town recently replaced the Danish language street signs with English/Danish signs. It seems even most of the local residents, long removed from their Danish roots, had trouble pronouncing the names of their own streets.

We had a splendid time!