A regional taste recently made its first appearance on our LAF radar, at White Farms Ice Cream in Ipswich. One of their flavors is called Frozen Pudding, which we assumed was some sort of chocolate pudding-pop-like flavor. We didn’t try any. Then we saw it on other Eastern Massachusetts ice cream rosters so, curiosity piqued, we finally asked someone about it.

White Farms has an interesting, and at times inscrutable, roster of ice cream flavors.

We learned that frozen pudding is a Christmassy rum-raisin-assorted-fruit ice cream (we’re not certain, but we think the fruit is dried or candied, and includes maraschino cherries, pineapple, peaches and apples). Why is it called frozen pudding? We did a little internet investigation when we got home, and discovered it was a very common flavor in Eastern Massachusetts, and is found virtually nowhere else. Seems to be popular among a mostly older crowd. Sure wish we had tried some! Next time, for sure. 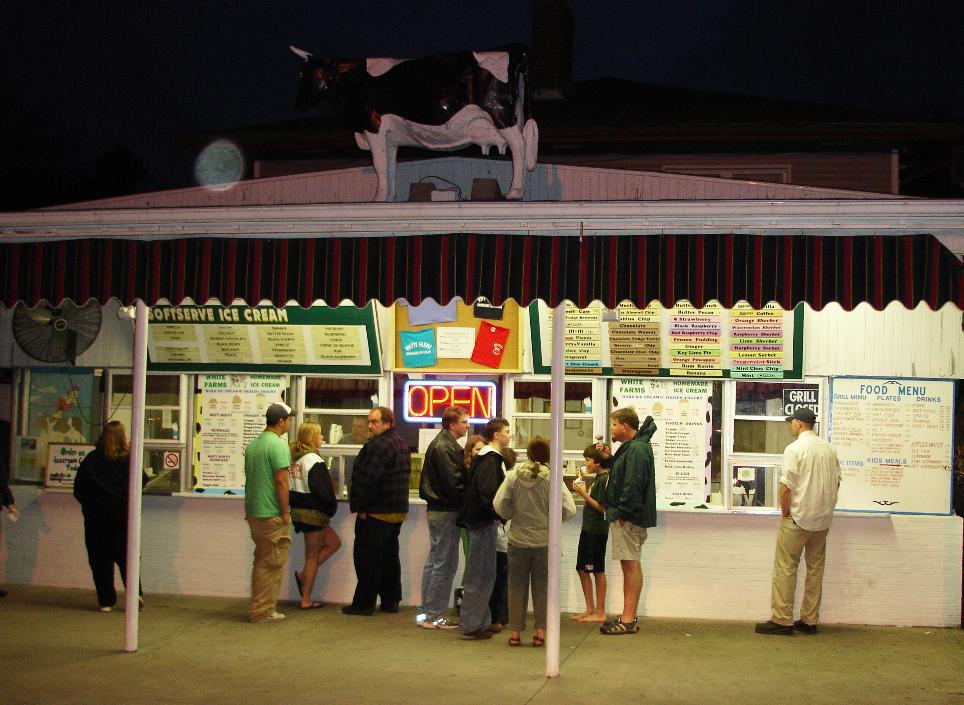 A cold night isn’t enough to keep the local ice cream lovers away.

A popular stop for people on their way to or from Crane’s Beach, White Farms makes its own old-fashioned-style ice cream, by which we mean it’s a relatively high-overrun ice cream. It probably won’t please the super-dense/super-butterfat hounds, but we’ve lately developed a fondness for these airier, easy-to-eat ice creams, particularly when they’re made with care.

While we have yet to sample the Frozen Pudding, we especially enjoyed another New England flavor favorite, Grape-Nuts. The cream is barely sweetened. They use no flavorings, not even vanilla, which allows the abundance of nubbly cereal to dominate; it seems as if the cream itself has the grainy taste of Grape-Nuts. We’ve enjoyed Grape-Nuts ice cream many times before, but this one was strange and wonderful. Another flavor that’s supposed to be particularly good is the Key Lime Pie.

The chilly evening we visited saw White Farms doing a lot of business. There are some picnic tables for sitting with your ice cream (no indoor facilities at all), but most folks lick their cones and spoon into sundaes standing up, or sitting in their cars. Servings are enormous. There’s a limited menu of burgers and dogs, of which we have no knowledge. The whole scene is watched over by a giant, generously-uddered roof cow.