Tripoli Bakery is a decades-old Italian/American bakery in the old Italian section of Lawrence. Most Northeast industrial cities have such a neighborhood, in varying stages of transition, and there’s usually a bakery or two that remain open. Some of these bakeries maintain the old traditions while others have seen better days. Tripoli is one of the good ones. 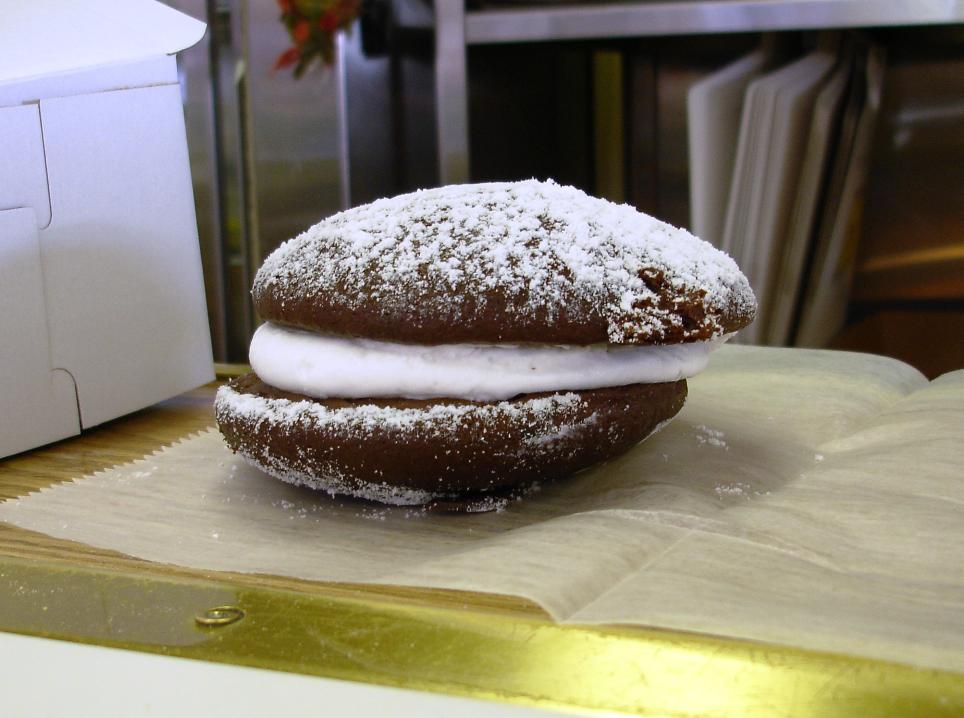 Tripoli’s whoopie pie is the best we’ve had. Normally, we eat plastic-wrapped specimens with lobster dinners in Maine, and they are fine in a convenience food sort of way, but Tripoli’s fresh-baked versions are head-and-shoulders above the others.

Like many neighborhood Italian-American bakeries, Tripoli makes bakery pizza, by which we mean big rectangular sheets with simple toppings, cut into squares. In some towns (Utica, NY comes to mind), it’s traditional to consume these slices at room temperature, but the pizza you get from Tripoli will be hot out of the oven (there’s a wait, even if you order a slice or two). And this is not just some sideline activity at Tripoli; there’s a whole other section of the bakery with its own entrance, devoted to pizza, and it does a roaring trade. 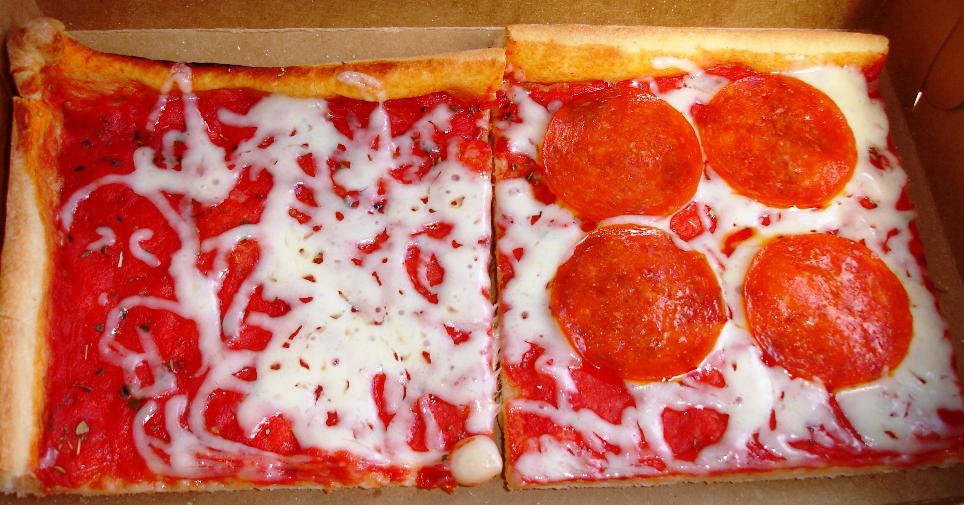 Even slices are baked to order. The limited extra toppings include pepperoni, extra shredded cheese, and a slice of provolone cheese.

The crust is light, thin, and crisp, the sauce sweet, and the cheese is applied sparingly, unless you ask for extra cheese. In its own simple and unimprovable way, this is some of the best bakery pizza we’ve ever had. If we lived in the area we’d probably do as we saw many others do and bring home multiple trays of this excellent pizza for football parties or family gatherings.

See how thin the crust is?

The bakery proper is not to be ignored, especially the pastries. We loved the sweet, fresh whoopie pie with big discs of light but very chocolatey cake. The lobster tail is outstanding. Lobster tails are the New England variation of sfogliatelle, the clam shell-shaped pastry with a filo-like crust. Tripoli’s lobster tail is filled with an especially delicious cream, tasting to us like a mixture of whipped cream and ricotta-based cannoli cream. 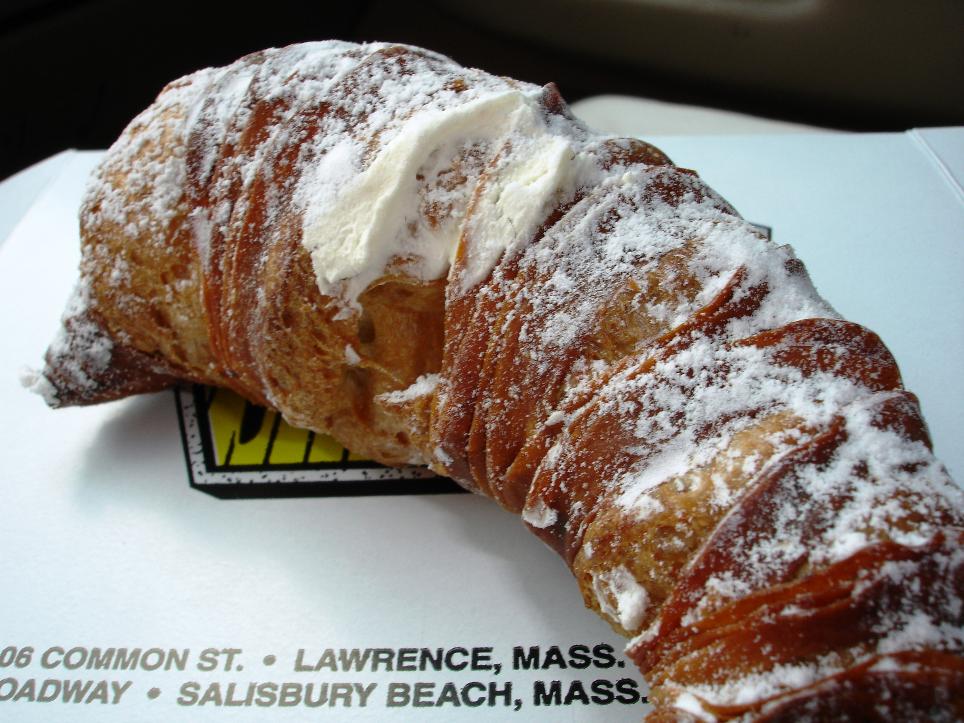 Assuming you don’t live, or have family, in Lawrence, you probably won’t just happen to find yourself in the city, but we think Tripoli is worth a special trip. 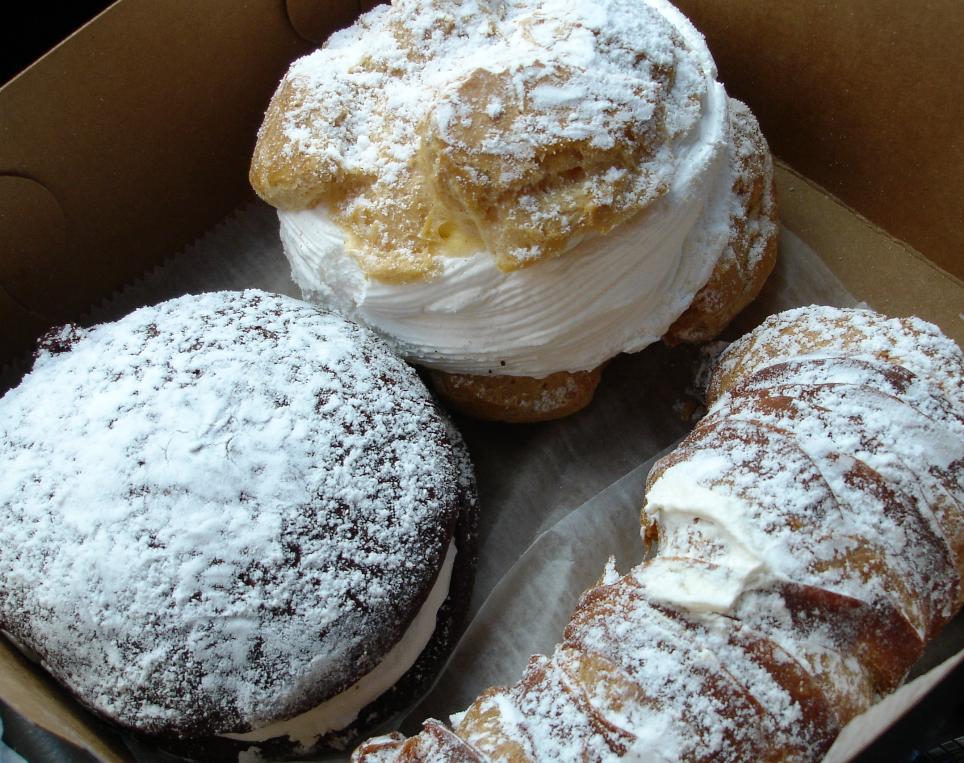 Note: There are branches of Tripoli in Salisbury Beach, North Andover, Methuen, and Seabrook, NH. They may well be the equal of the Lawrence original, but as we’ve never been to them, we haven’t a clue. 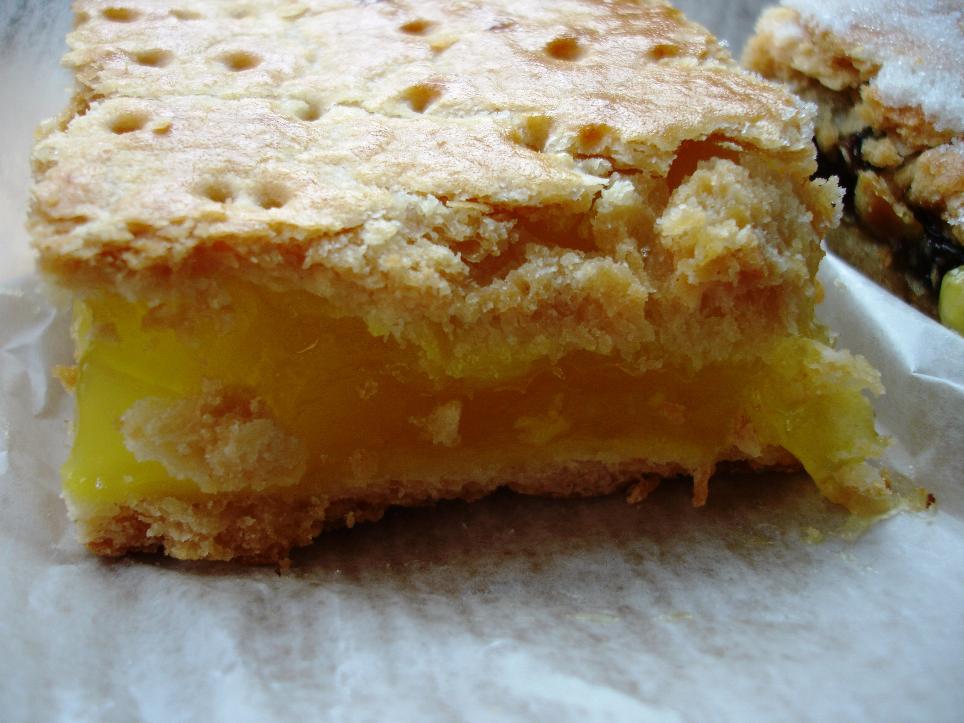 Tripoli makes a variety of fruit squares, including fig, raisin, and this lemon square. We think they are OK but not quite as appealing as the other pastries. 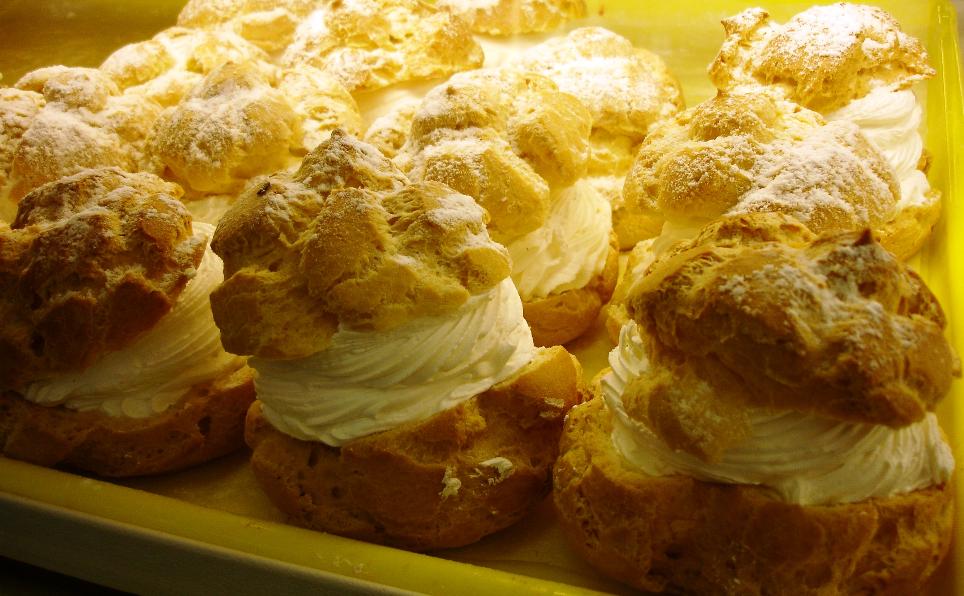 A tray of cream puffs arrayed in the bakery case 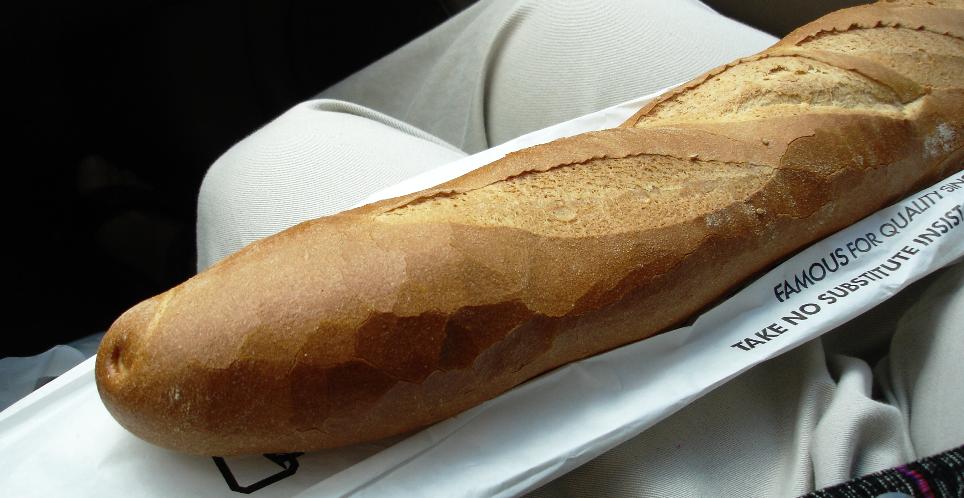 Baguettes are called sticks around here. This is a well-done stick. They actually have a basket of well-done breads for those who enjoy an especially dark and crunchy crust. The bread is very light; the crust shatters into millions of flakes as you break into it. The breads come in a variety of shapes, with different names, but we were told they are all made from the same dough. 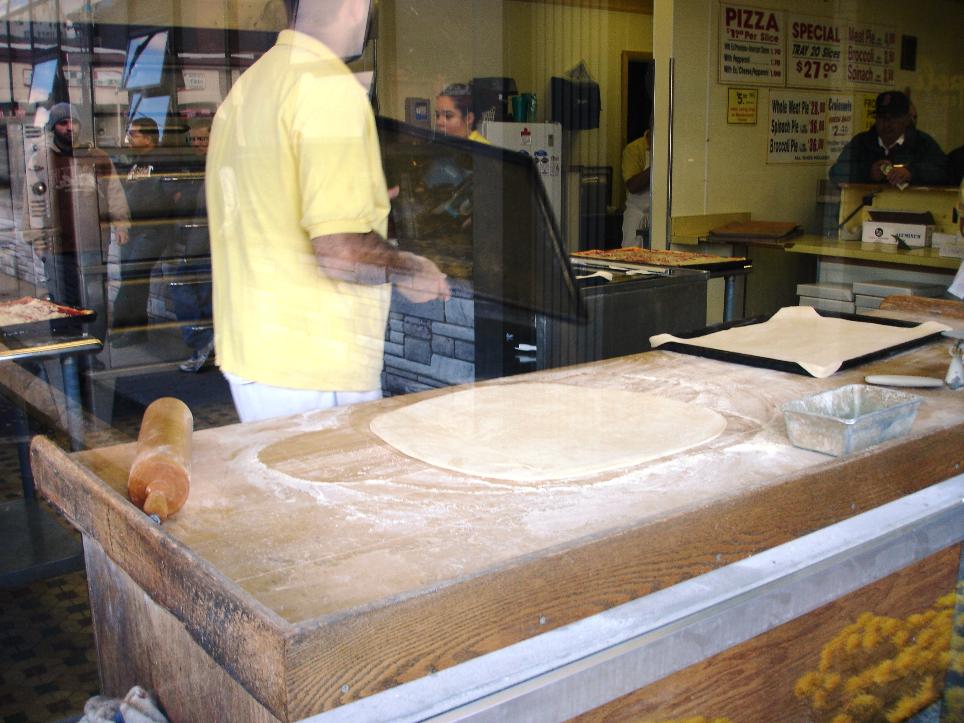 The dough is rolled out and then stretched to fit a sheet pan. Ladles of tomato sauce are spread across the surface, then the pans are put in the oven to partially bake before being removed for the sprinkle of cheese, and any additional requested toppings. They then receive their final baking. 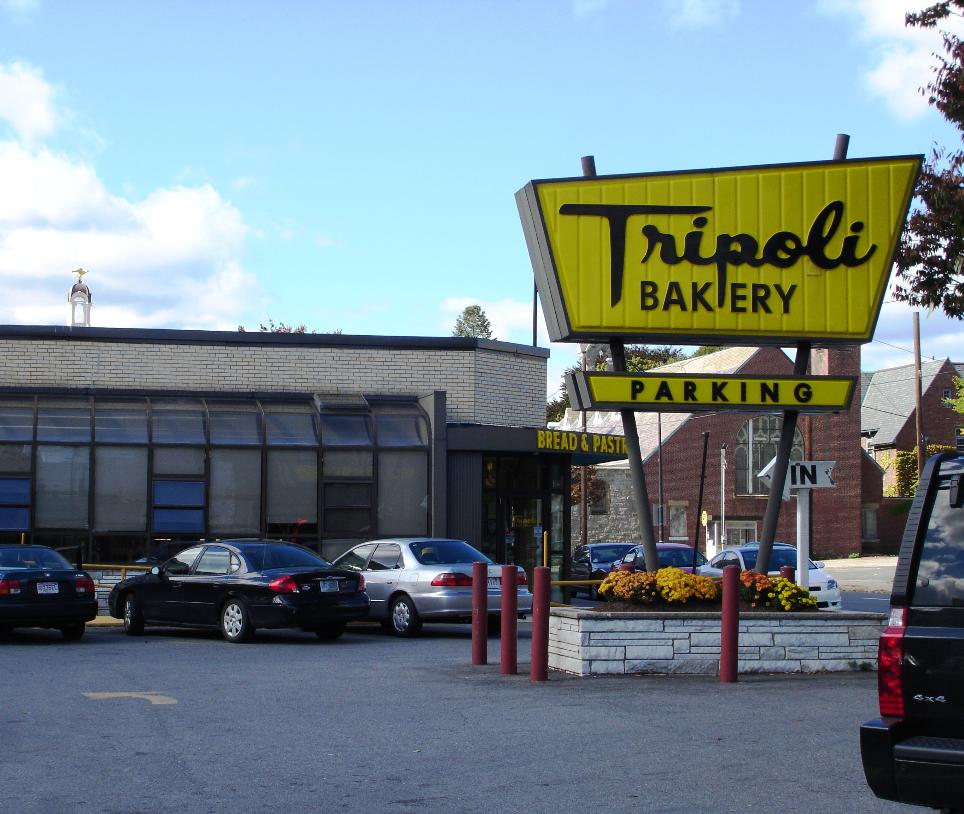 Tripoli has a large parking lot, and they need it. They are very popular.