Hot dogs generally run about six inches in length (though plenty of good ones — such as those in and around Troy, NY and Rhode Island —  come in abbreviated two-bite sizes). But there’s something special about foot-longs. Yes, they’re basically two hot dogs long but, somehow, they’re much more than twice the fun (unless you are one of those party-poopers who recoil at the sight of culinary overstatement). Perhaps nowhere in America does the foot-long reign more supreme than in WNY (which is how residents of Western New York, in and around Buffalo, identify their home region).

Although these are standard-length dogs, you can see how Ted’s slashes the dogs while grilling them over coals for maximum crustiness.

The Buffalo News included foot-long hot dogs on their megalist of 100 Things Every WNYer Should Do at Least Once. They sent a reporter and photographer out to visit the Buffalo area’s two principle foot-long purveyors, Ted’s and Louie’s. Ted’s is a mini-chain in the region, and the dogs, o-rings, and loganberry drink are glorious. However, our hearts belong to the scruffy little dog joint that introduced the foot-long to Buffalo: Louie’s, alongside Sheridan Park in Tonawanda. 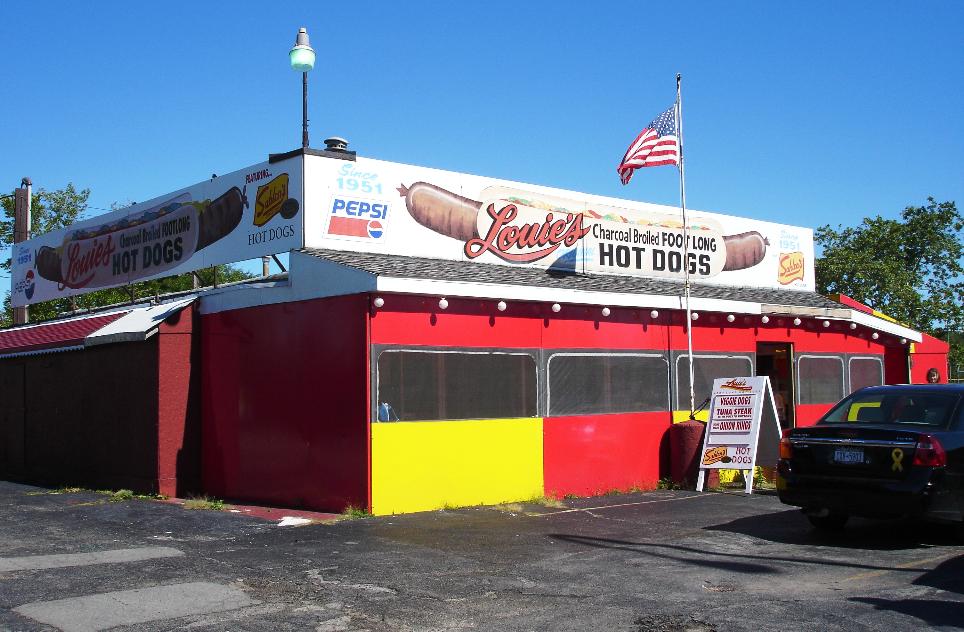 This original Louie’s Foot Long sits right by the edge of Sheridan Park.

Some of our love for Louie’s can admittedly be attributed to their grilled bologna steak sandwich with peppers and onions, but we enjoy Louie’s soul and history as well. Both Louie’s and Ted’s use the local Sahlen’s frank, although Louie’s claims theirs are made with a unique recipe (we have our doubts), and both places grill the dogs over charcoal, resulting in a righteous crunch. Read more about Louie’s and Ted’s in this Buffalo News story.