Let us tell you a little story: years ago, while we were waiting for a flight out of Austin, TX, we stopped into the airport Dickey’s Barbecue Pit (yes, we know, what can we say?) for something to eat. As we were waiting for our food, a businessman-looking fellow walked up:

African-American kid taking orders: Can I help you?

Businessman (with that unmistakably cheerful uffda accent, pointing at a smoked sausage):  Let me have one of those red weenies on a stick!

Businessman: Put one of those red weenies on a stick for me, willya?

Kid sheepishly looks left, right, behind him, then turns back to his customer with a helpless look on his face: I don’t understand what you’re saying.

Fried olives on a stick – they actually taste good in the same way that fried dill pickles taste good.

The businessman eventually gave up on his stick quest and got his sausage on a plate, and we did our best to restrain our laughter, but we’ve repeated the line to each other many times over the years: Gimme one of those red weenies on a stick! Anyway, we tell you this just to demonstrate how ingrained in the Minnesota psyche it is to eat food on a stick. The best place to see that first-hand is at the Minnesota State Fair. 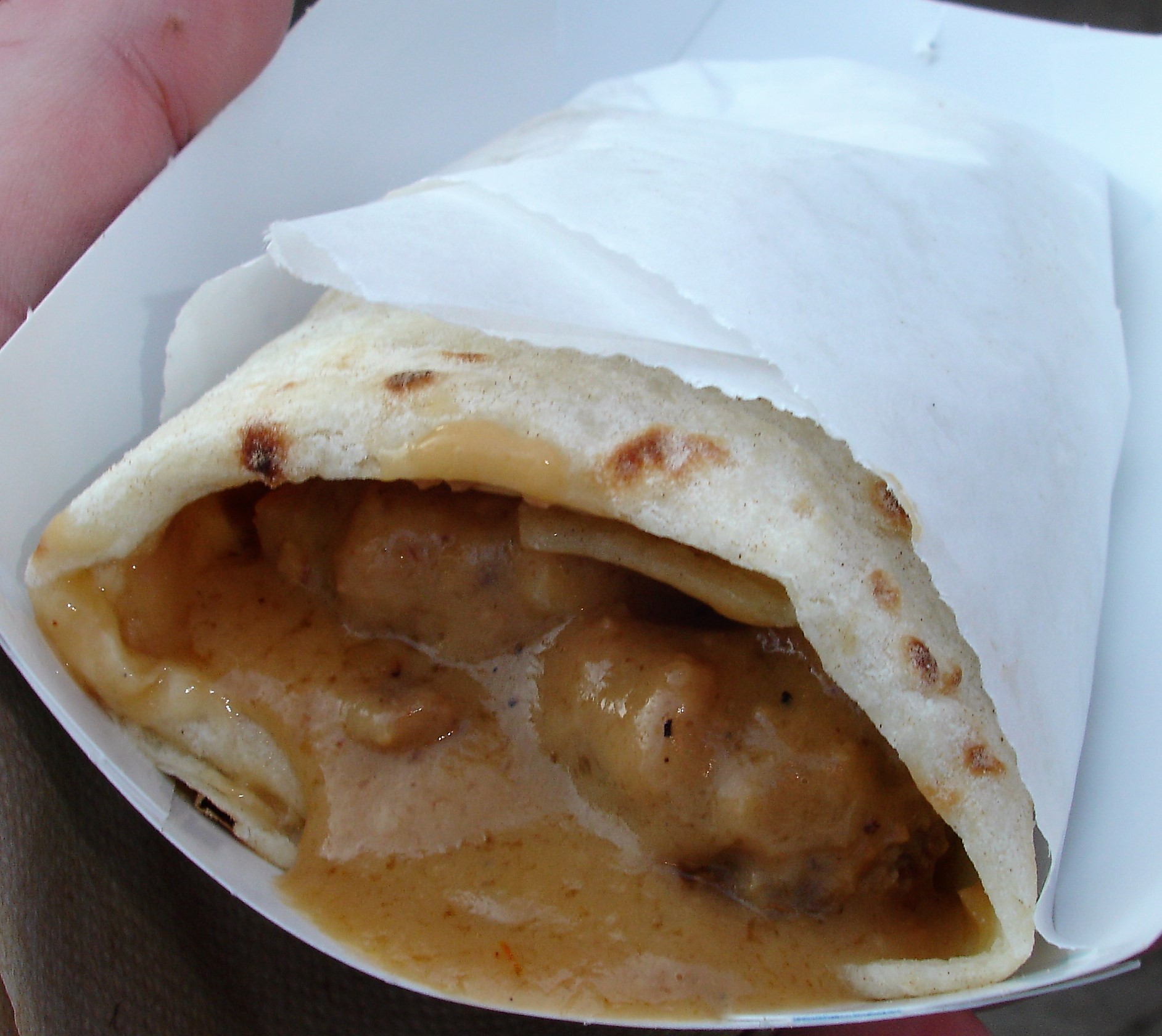 This is the rolled Norwegian flatbread called lefse, filled with Swedish meatballs. Best thing we ate. 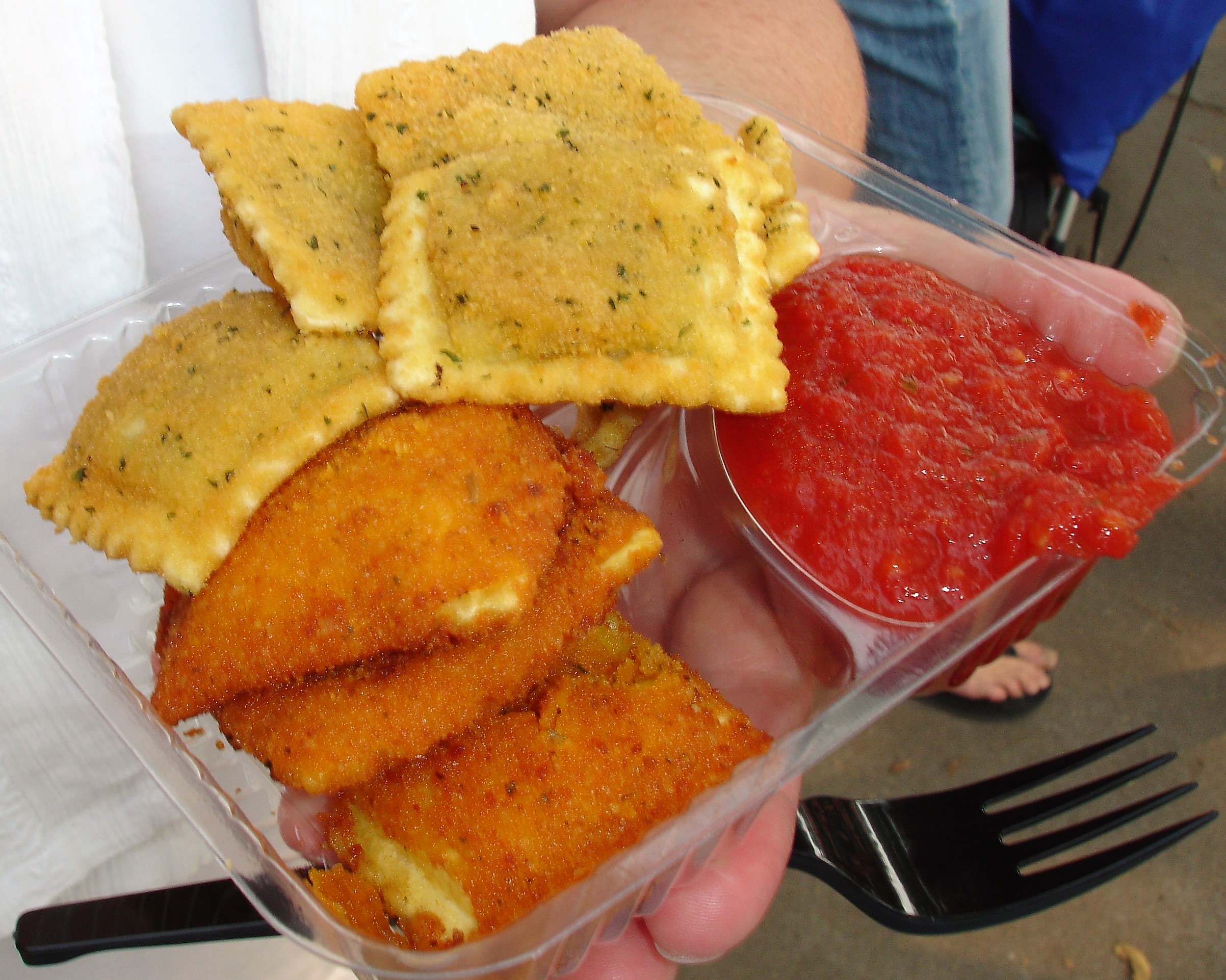 Two kinds of fried ravioli with marinara for dipping, from Vescio’s

It may seem, from that list, that anything edible at the fair comes on a stick, but really, that just scratches the surface of the vast fair menu. Minnesotans come to the fair to eat. Pretty much everyone we spoke with in Minneapolis somehow eventually turned the conversation towards the food at their beloved fair, always with specific recommendations, from the guy at the rental car counter to our waiters to the check-in clerks at our hotels. 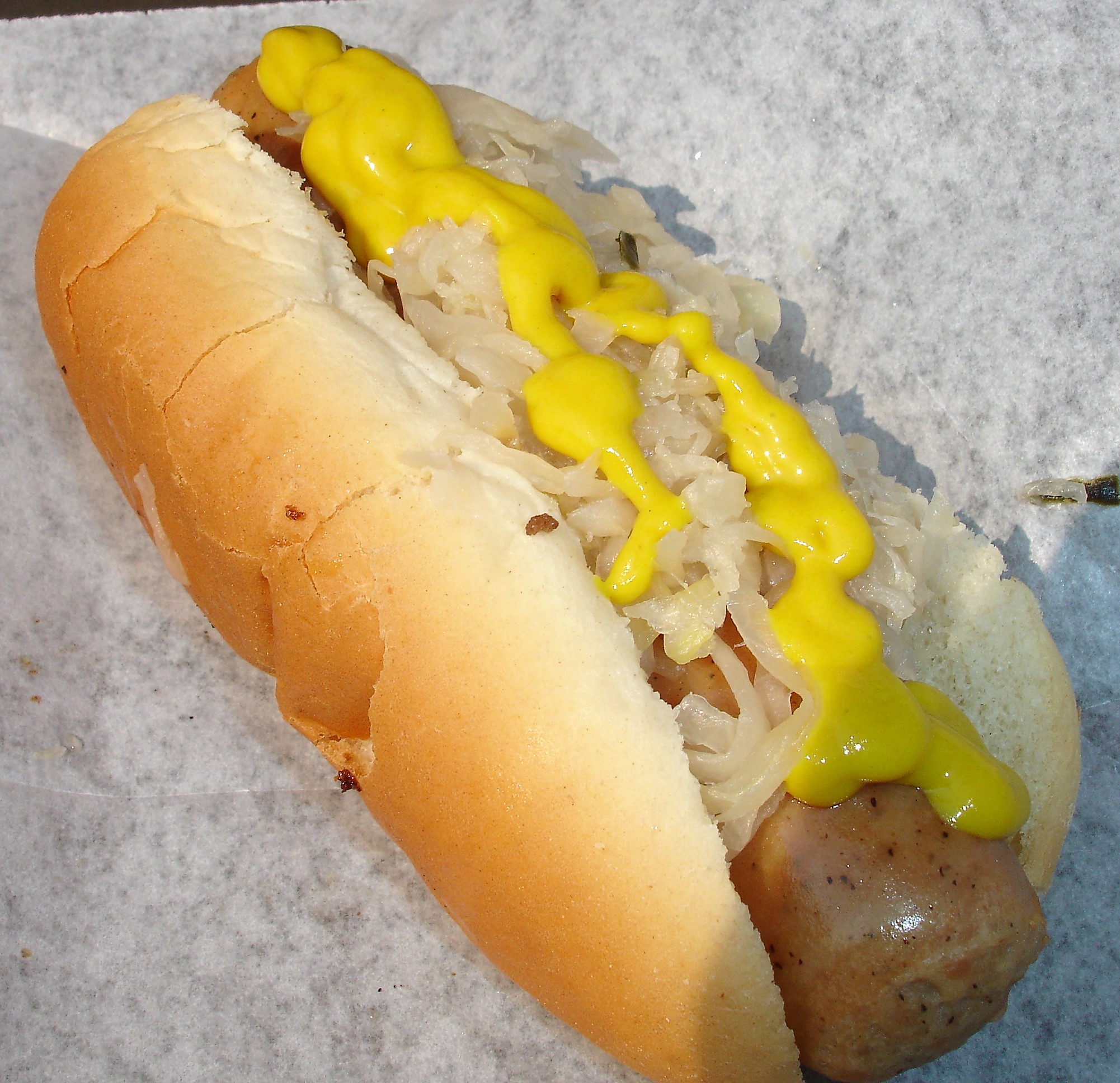 If there are brats around, Sue will eat one.

The fair is huge and, on the day we were there, utterly packed with humanity like Times Square on New Year’s Eve. All the usual state fair activities are present: barns with farm animals, 4H displays, quilting competitions, canning competitions, concerts, a midway… and we love it all. But the food takes center stage in Minneapolis. 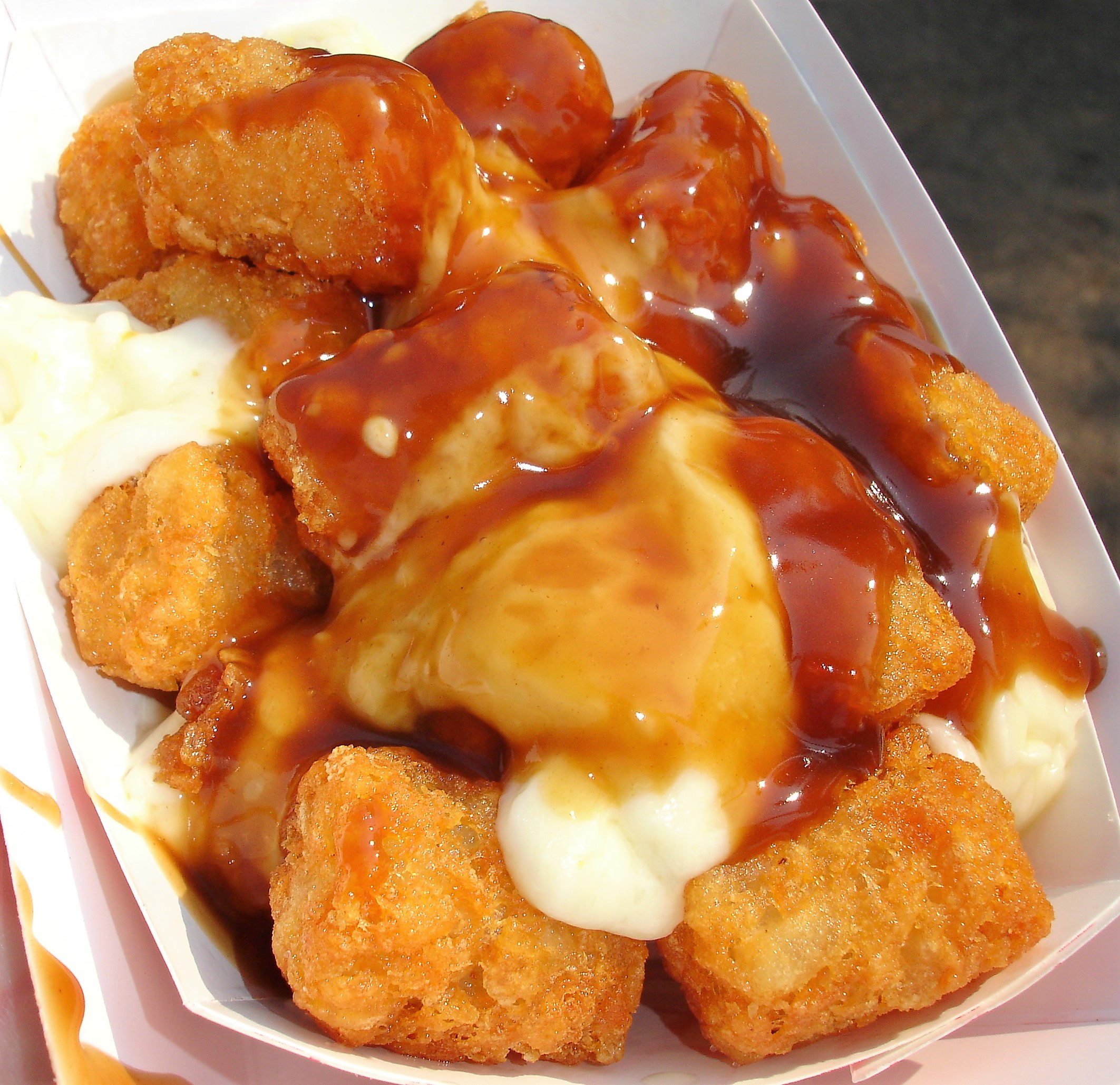 The most popular foods at the fair have to be the fried cheese curds, Sweet Martha’s chocolate chip cookies, and all-you-can-drink milk. Sweet Martha’s cookies come hot from the oven, and you see folks everywhere walking around with a big, overflowing bucket of them. If you don’t want to kill your appetite for the day on a bucket of cookies, but want to try them, do what we did (we should be ashamed to say): go up to a nice looking person (preferably male, with other people, preferably female, in tow) with a bucket still overflowing and ask them, ingenuously, “Are those cookies as good as people say?” You are sure to be offered one. And they ARE good. All-you-can-drink milk, plain and chocolate, will run you two bucks. Many fairgoers like to bring their bucket of cookies with them. 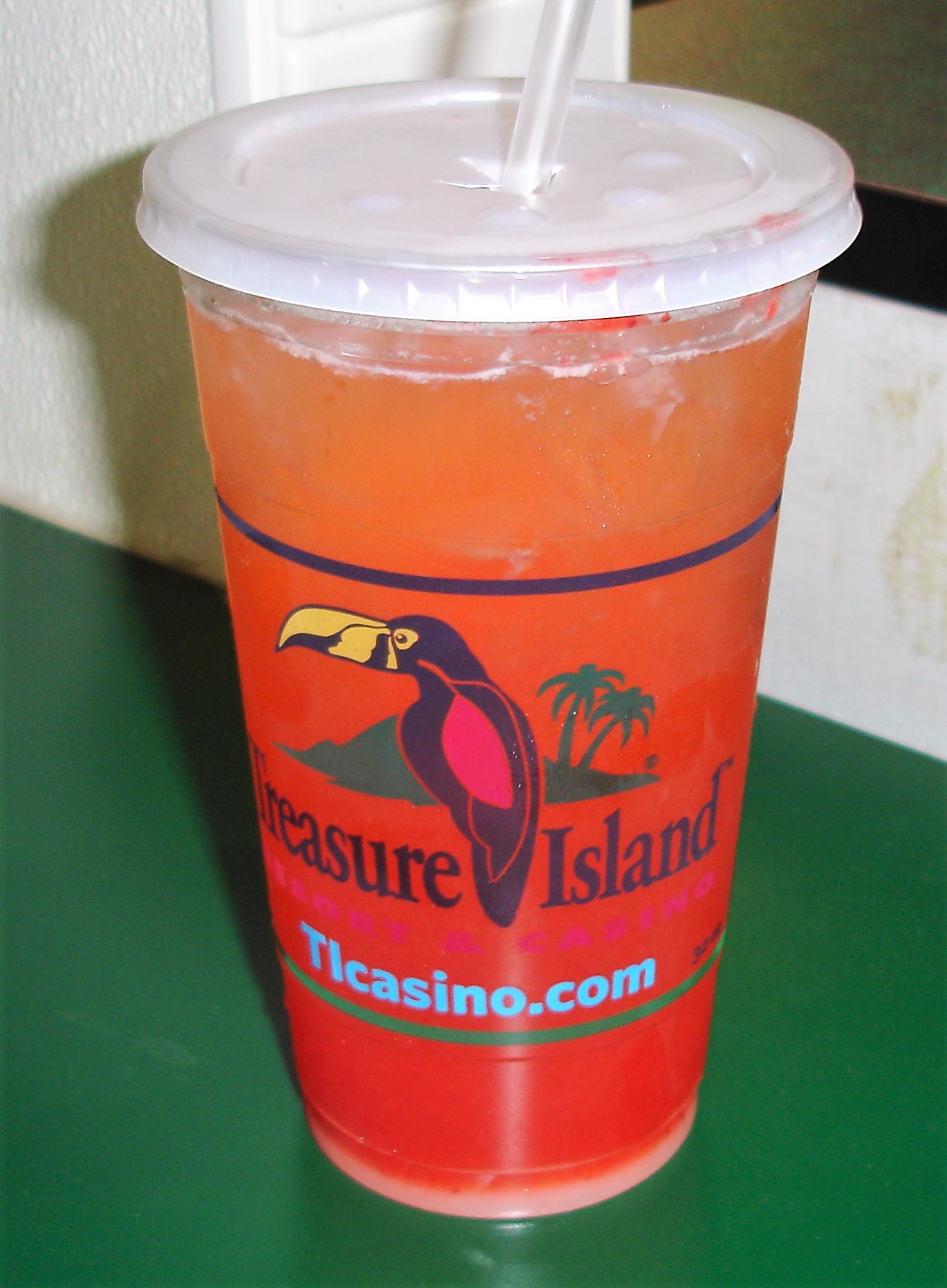 Each summer, a big deal is made in selecting and announcing the new fair foods for the year. Some of this year’s new foods included a ground pork belly burger topped with crisped belly, Jack cheese, slaw, and pickled onions, Memphis Totchos, which are Tater Tots topped with sliced bananas, bacon, and peanut sauce (?!), Triple Truffle Trotters: waffle fries topped with bacon, peppers, and truffle oil, and a cornflour eclair filled with sweet corn cream and glazed with blueberries.  Each year it seems to get crazier. 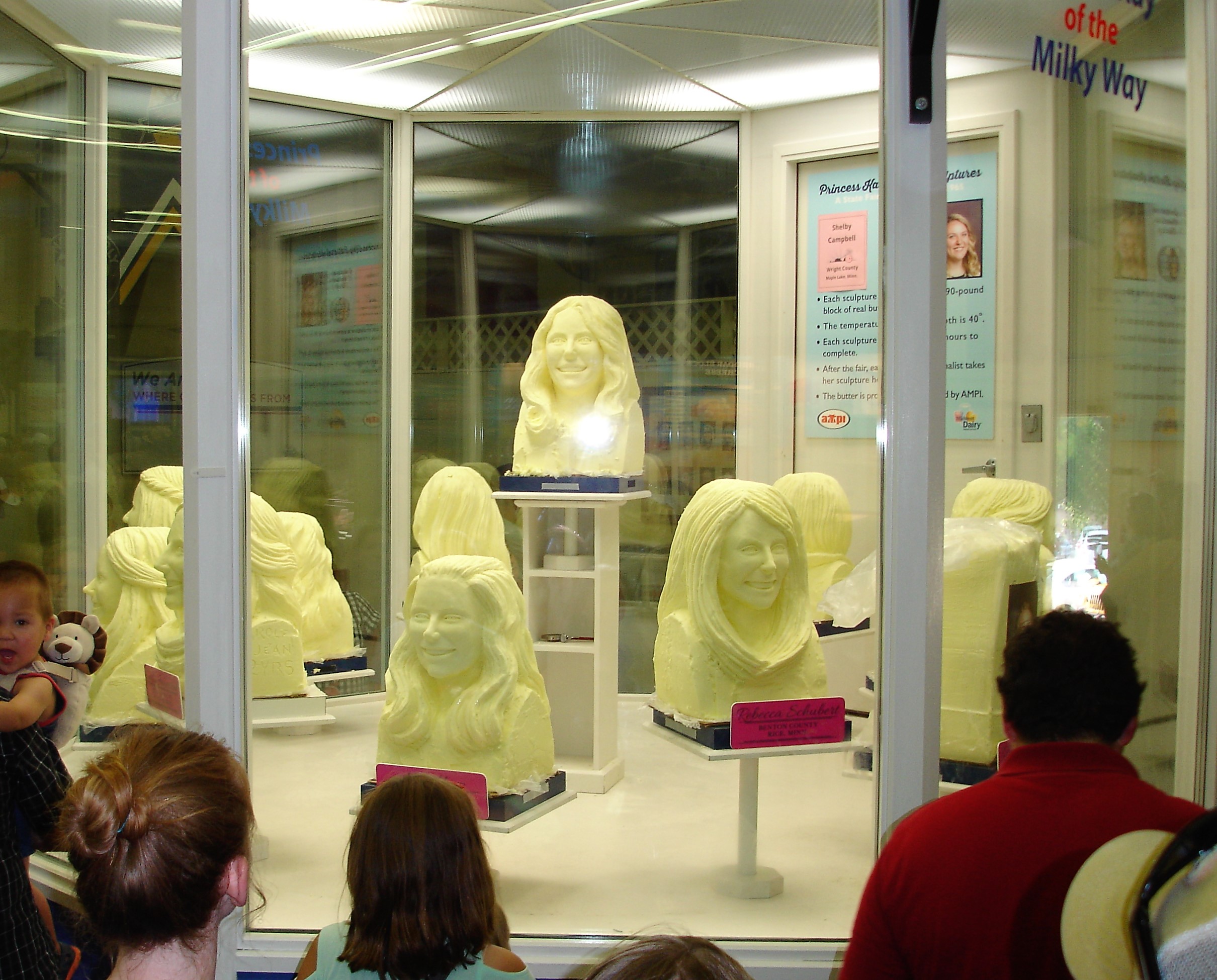 We absolutely love state fair butter sculptures. In Minnesota each year, Princess Kay of the Milky Way is selected to represent the Midwest Dairy Association. The princess and her court have their likenesses carved into 90-pound blocks of butter. After the fair, each one of the young women get to take home their 90-pound butter sculptures. What they do with 90 pounds of butter is anybody’s guess.

You have to visit the Minnesota State Fair at least once in your life. The dates for 2018 are August 23rd through September 3rd.