In the far northeastern corner of Massachusetts, around Ipswich and Essex, you’ll find the best fried clams in America. Head about 18 miles up the coast, to Maine, and you’ll begin to find America’s finest lobsters. So doesn’t it seem reasonable that those short 18 miles between the Massachusetts and Maine coasts would be an equally rich source for great seafood? Yet, have you ever heard of anyone heading to New Hampshire for seafood? Well, that’s not quite what we did, but we did stop in Seabrook on the way to Maine, where we found worthy fried clams and lobster rolls that are well-known to locals but mostly a secret to visitors passing by on the interstate. 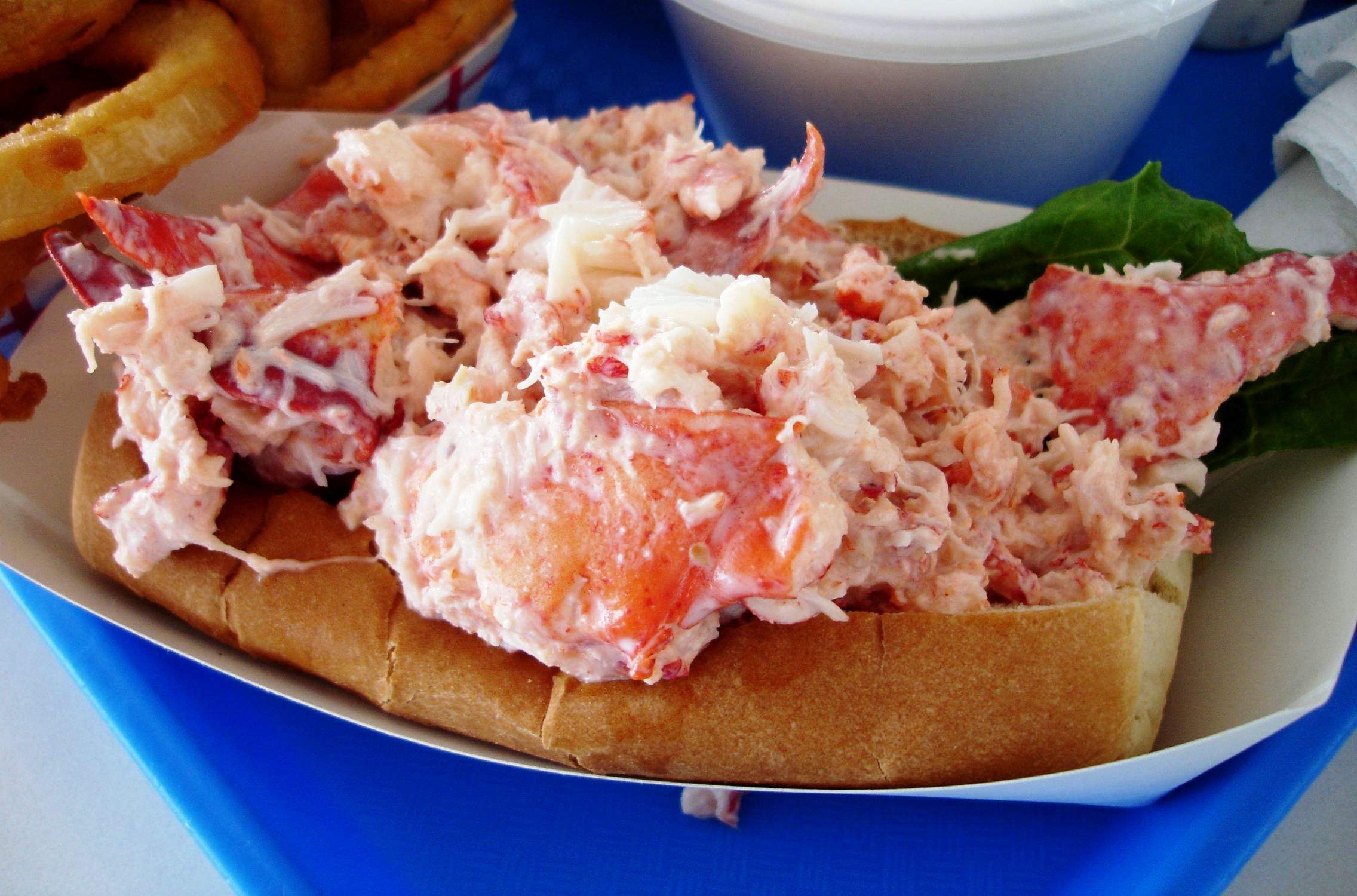 Markey’s lobster roll is filled with large chunks of claw meat and a judicious amount of mayo.

If you aren’t from the area you probably know the town of Seabrook only for its massive nuclear reactor, but it is also known for a pair of seafood shacks across the street from each other and along the Blackwater River, about a half-mile from the ocean beaches. Brown’s got there first but Markey’s has a liquor license, so guess which one was our choice?

Steamers are local, not farmed. You can tell by the chipped edges and varying sizes. They also need a more thorough rinsing in the broth than their farmed cousins. We only wish the butter was really butter (we don’t know for certain that it isn’t the real stuff but to our tongues there was no butter flavor whatsoever).

The ordering system at Markey’s is a little screwy. There’s a counter to place your order for most of the food, and a separate counter if you want a lobster or something from the raw bar. There’s a third counter if you want beer or steamers! We imagine this is not a great situation if the place is insanely crowded, but we arrived between lunch and dinner and the lines were not outrageous. 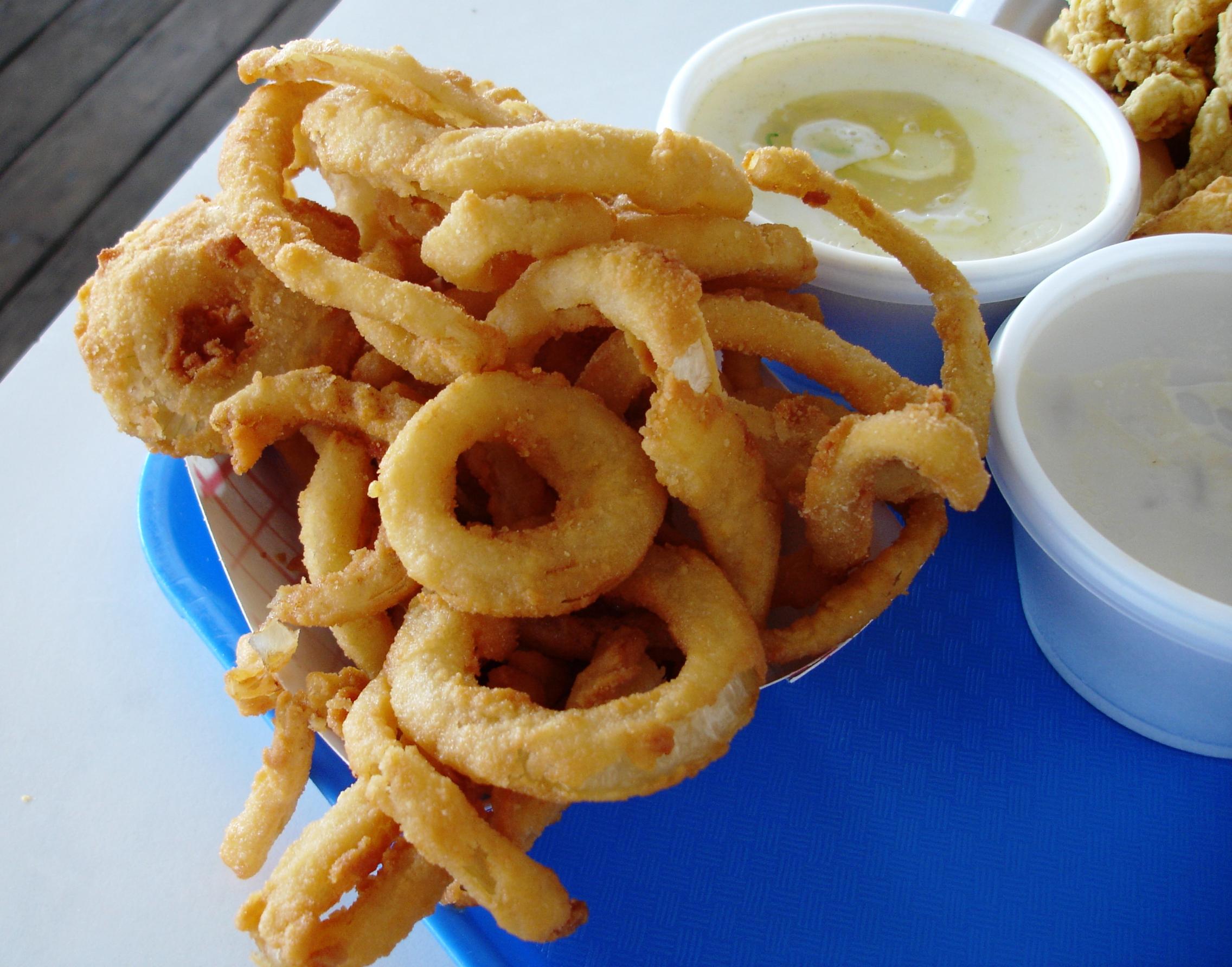 Onion rings are made on-site (onion middles are also available).

We recommend the utterly grease-free fried seafood and the lobster roll. We enjoyed the clams but were especially impressed by the sweet and moist fried scallops. You can substitute onion rings for the fries for a small fee and we recommend you do so, for these rings are homemade and totally greaseless. You will need to add a sprinkle of salt to whatever fried food you order, however; the breading seems to be salt-free. 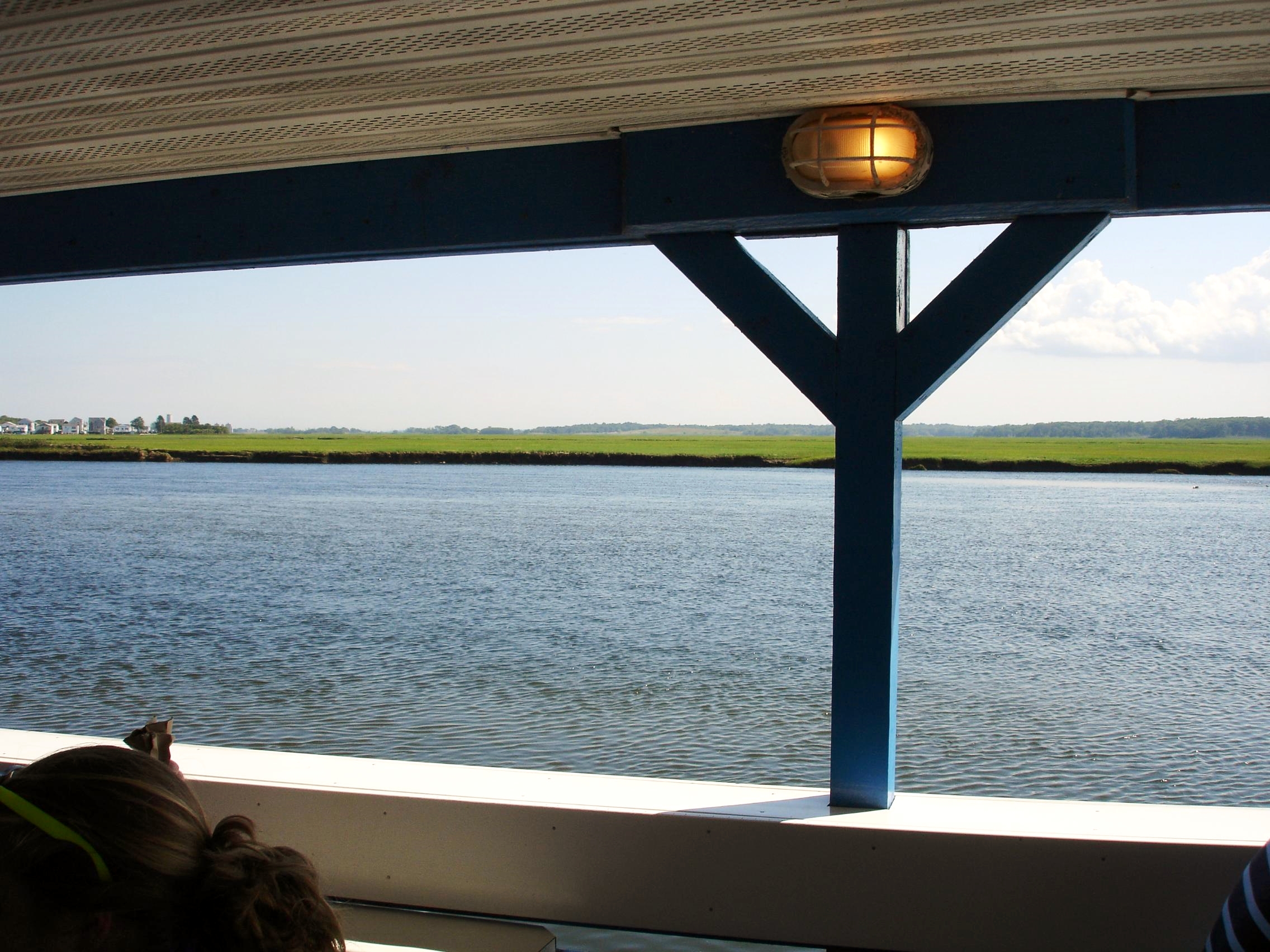 The view from the outside deck adds to the fun. Lucky Markey’s faces in this direction (that’s Massachusetts). The other way? A nuclear power plant.

The lobster roll is built inside a top-loader, with big juicy multi-bite sections of claw meat, the mayo added with a fairly light hand. The clam chowder is curious, a fairly mild milky brew chock full of big chunks of potatoes. Clams are present only in the form of whole soft-shells (sans shell), the same guys you find in the fried clams or the steamers. The chowder tastes like potato soup until you spoon up one of the large, fresh clams. Definitely not for those who like to taste, but not see, their clams. 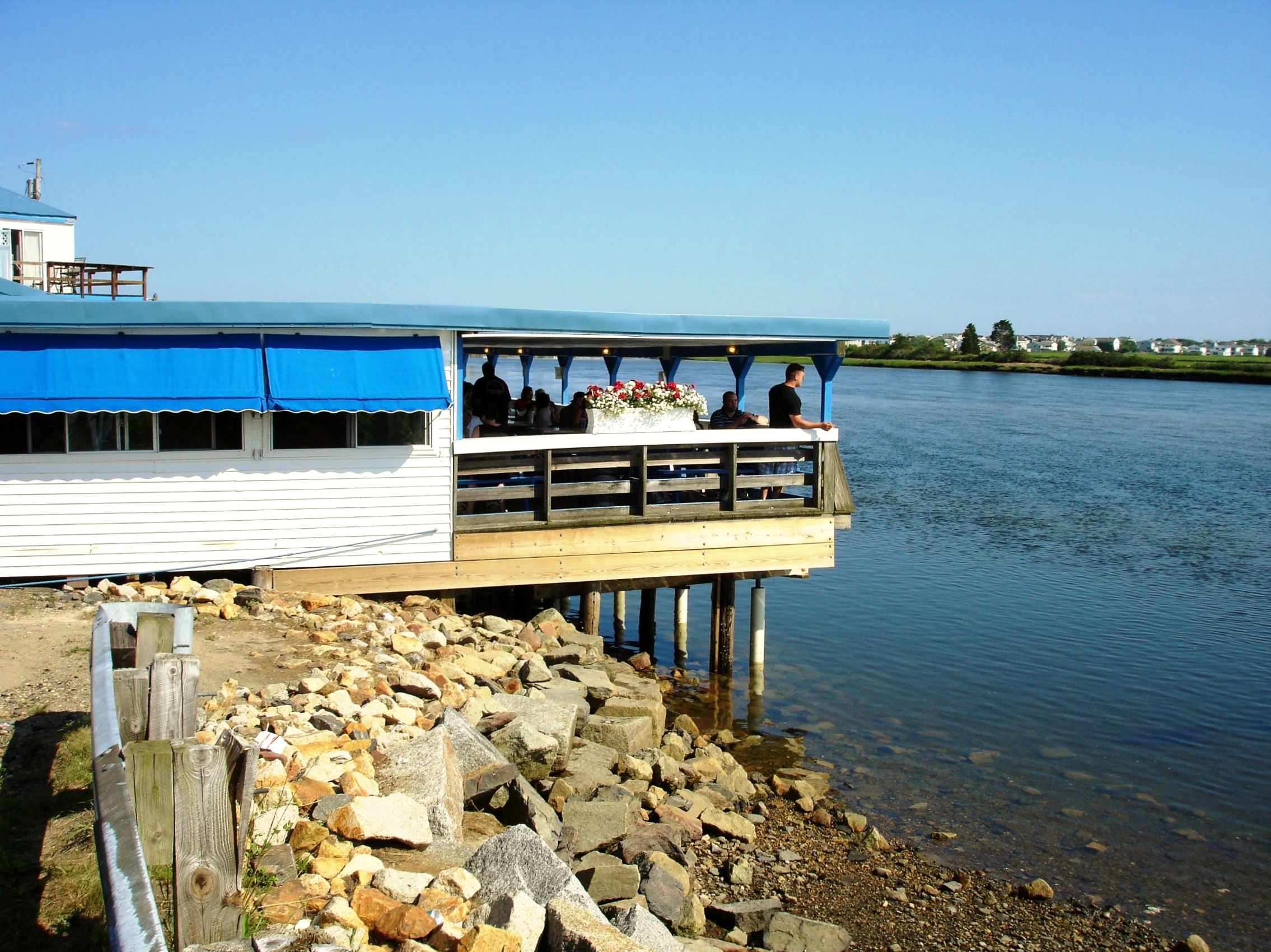 Markey’s Lobster Pool is right on New Hampshire’s border with Massachusetts, about a half-mile from the Atlantic Ocean.

The steamers are fine but these are not farmed clams, so they’ll need a good rinse in the provided broth. More importantly, the melted butter does not taste to us at all like the real deal, and if you like to dip your steamers, the fake stuff just doesn’t cut it. We didn’t try the fresh-cooked lobsters, and didn’t notice any on the other tables, but that margarine dip (if that’s what it is) would be a deal-killer for us. 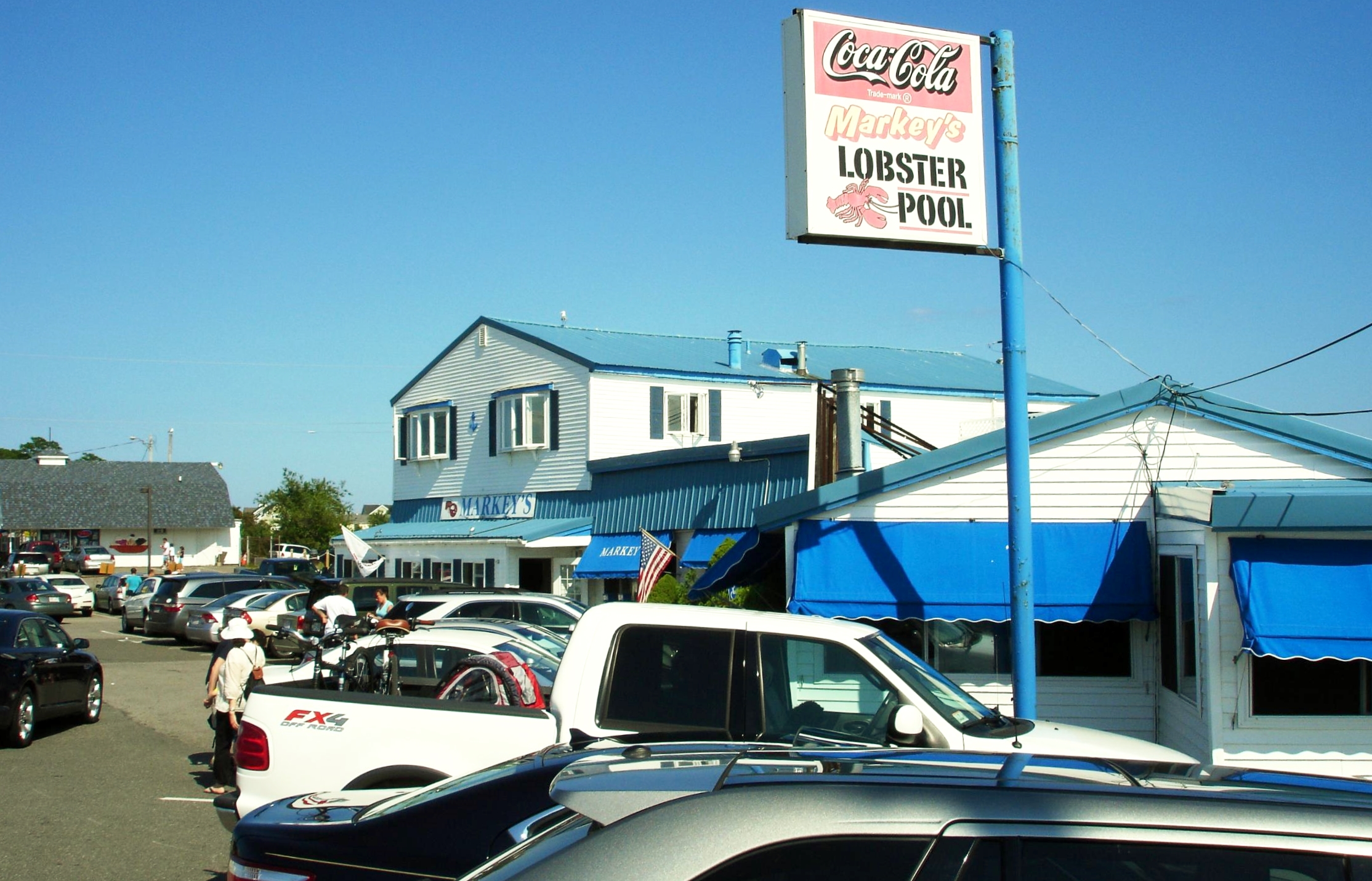 Seabrook offers a seafood choice: across the street is Brown’s Lobster Pound. You might assume they are bitter rivals but they are actually said to be supportive of each other.

Markey’s is situated right on the New Hampshire-Massachesetts state line. Sit out back on the covered deck (the choicest seating) and you look out over the Blackwater River and the state of Massachusetts (the nuclear plant is in the other direction). This is as fine a setting for enjoying seafood-in-the-rough as anywhere in Massachusetts or Maine.