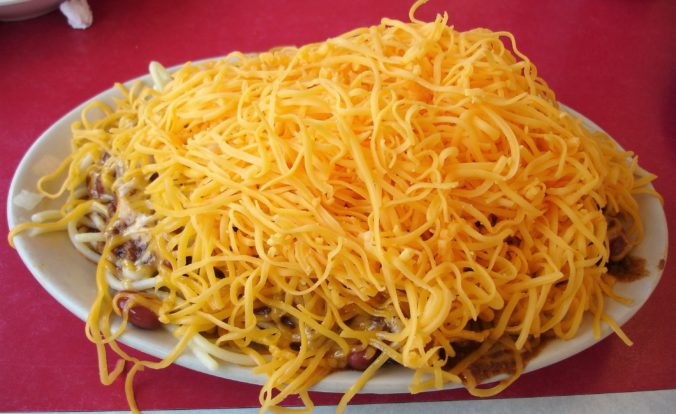 Gold Star's chili seasoning profile is a bit different from most others. Sue prefers it.

We well remember our first taste of Cincinnati chili. We were summering in Washington, D.C., our first jobs out of college, and a friend told us about a place that recently opened up in the ‘burbs (Virginia, we think) that served something called Cincinnati chili. Chili, we knew – spicy hot, cumin-scented, but what did Cincinnati have to do with it? 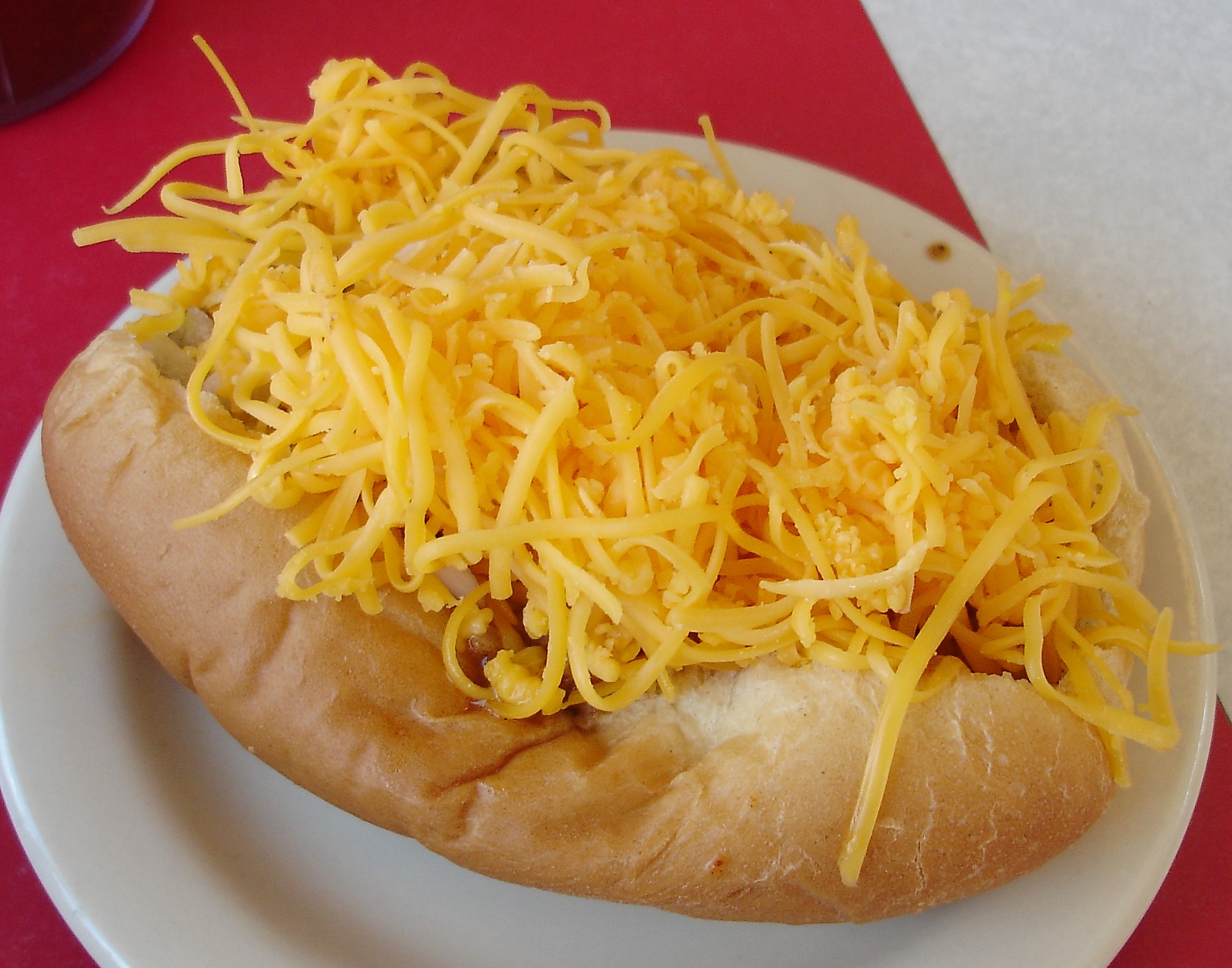 Cheese coneys are topped with chili, mustard, onions, and a hillock of shredded cheese.

When we received our oval plates filled with soft spaghetti topped with sweet meat sauce and shredded yellow cheese, we were appalled and indignant: this isn’t chili! Our callow palates had not yet learned of the wondrous culinary ways of our country, and we had yet to develop the open-minded ability to appreciate the infinite possibilities and variations of American regional cuisine.

Chili nomenclature can be confusing: is this a 3-way with beans instead of cheese, or a 4-way with beans minus cheese? We prefer not to take chances. We ordered spaghetti, beans, and chili.

The lesson here is this: if you think you know chili, and have never been to Cincinnati, then you don’t know chili. The stuff they call chili in Cincinnati really is chili, as sure as Texas chili is chili. They’re just different. And that’s one of the things that makes eating across America so interesting, isn’t it? 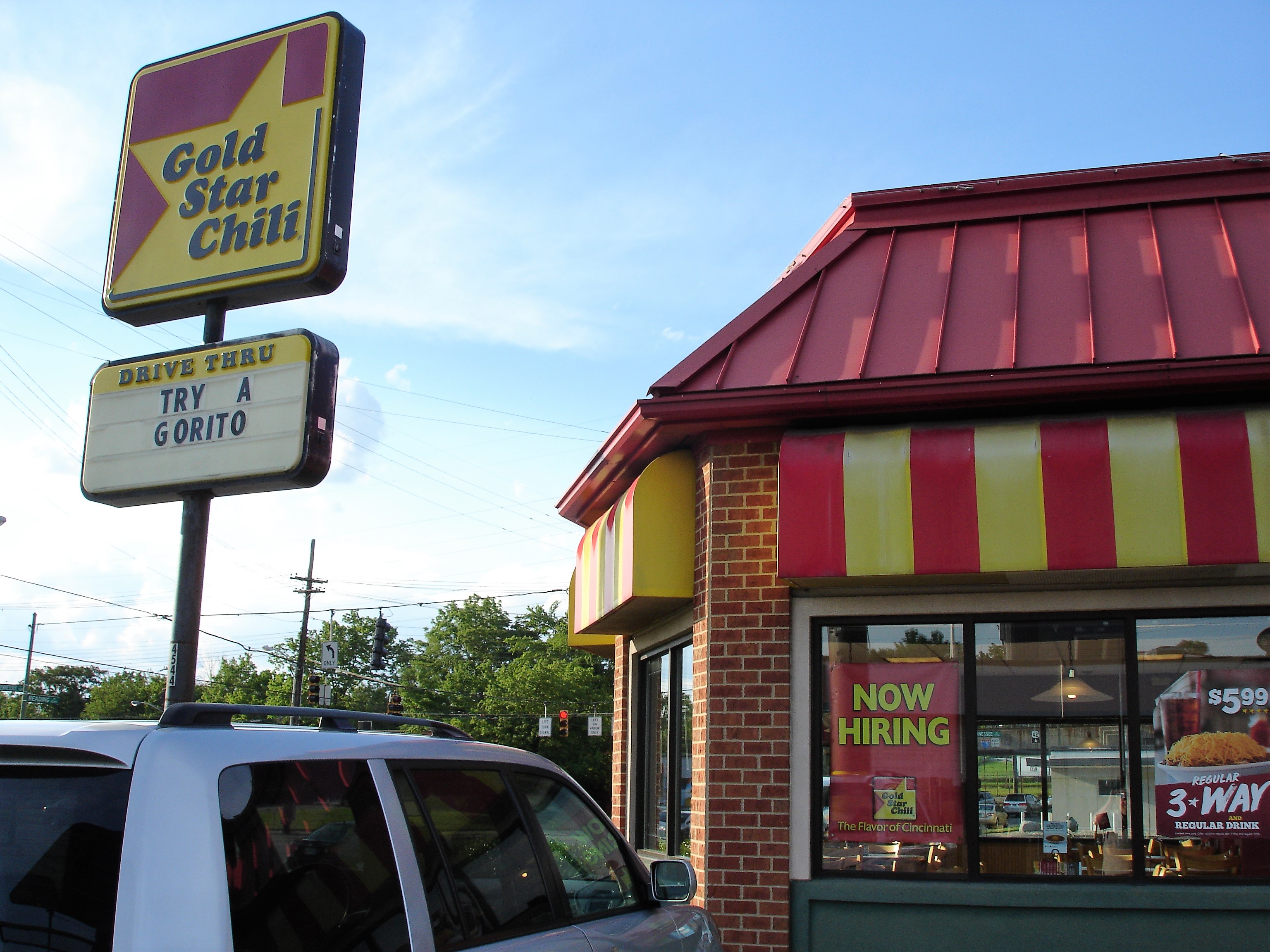 Gold Star is the newer of the two big Cincinnati chili chains, having been founded in 1965. Skyline goes back to 1949.

The differences between chilis in Cincinnati can be subtle. Sue appreciated Gold Star’s chili above the others we tried: she felt the spice blend was unique. and one that she favored. This went unnoticed by Bruce’s less discerning palate, although he thought the cheese differed a bit: at most chili parlors, if you mix up the layers of chili before eating, the cheese tends to melt into the whole. Gold Star’s cheese retained some of its chewy, separate character. He doesn’t feel this makes it better or worse, just a little different. Sue didn’t notice this because she eschews the cheese topping.

Gold Star is the second largest Cincinnati chili chain, after Skyline. The chili scene is pretty much dominated by those two, in fact, although there are plenty of independents and mini-chains around as well. Cincinnati chili was invented by immigrants from Greece and the surrounding countries. Even today, most chili restaurants seem to be owned by folks of Greek descent. Skyline, too, was founded by Greek immigrants. Gold Star’s 1965 origin is interesting in the fact that it was begun by four Jordanian brothers. If there’s a unique spice mix at Gold Star, perhaps that’s the reason.