There are two kinds of goetta fans: those who live in or come from the Cincinnati area, and those who have received their advanced degrees in regional eating. Yes, for some reason goetta (pronounced as if the “o” wasn’t there), unlike its close Philadelphia cousin scrapple, has never ventured beyond its hometown. Goetta is a loaf made with ground pork and/or beef and pinhead oats (which are the coarse oats also known as steel-cut or Irish). It’s then sliced and fried, often for breakfast. 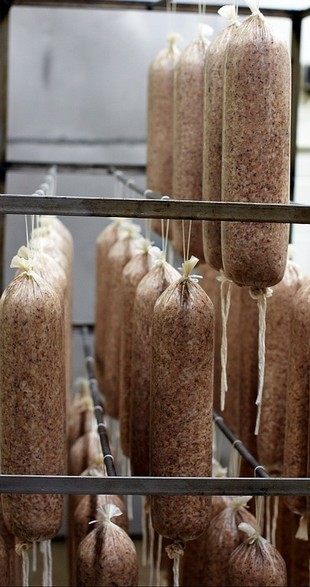 Stehlin’s Meat Market of Cincinnati makes their goetta in cylinders.

Here’s a terrific story about goetta, from the Cincinnati Enquirer, that’ll tell you just about everything you might want to know about the stuff, and then some: what it is, its history, how it’s eaten, “new ways with goetta” (on a burger, in fried rice, in quiche, on pizza anyone?), vegetarian goetta, and over a dozen places that make goetta for retail sale, with full tasting notes! We’ll be bringing this story with us on our next Cincinnati trip.