Two words: bluegill and pie. That’s what you need to know if you’ll be visiting Clay’s Family Restaurant, just outside of Fremont, Indiana. 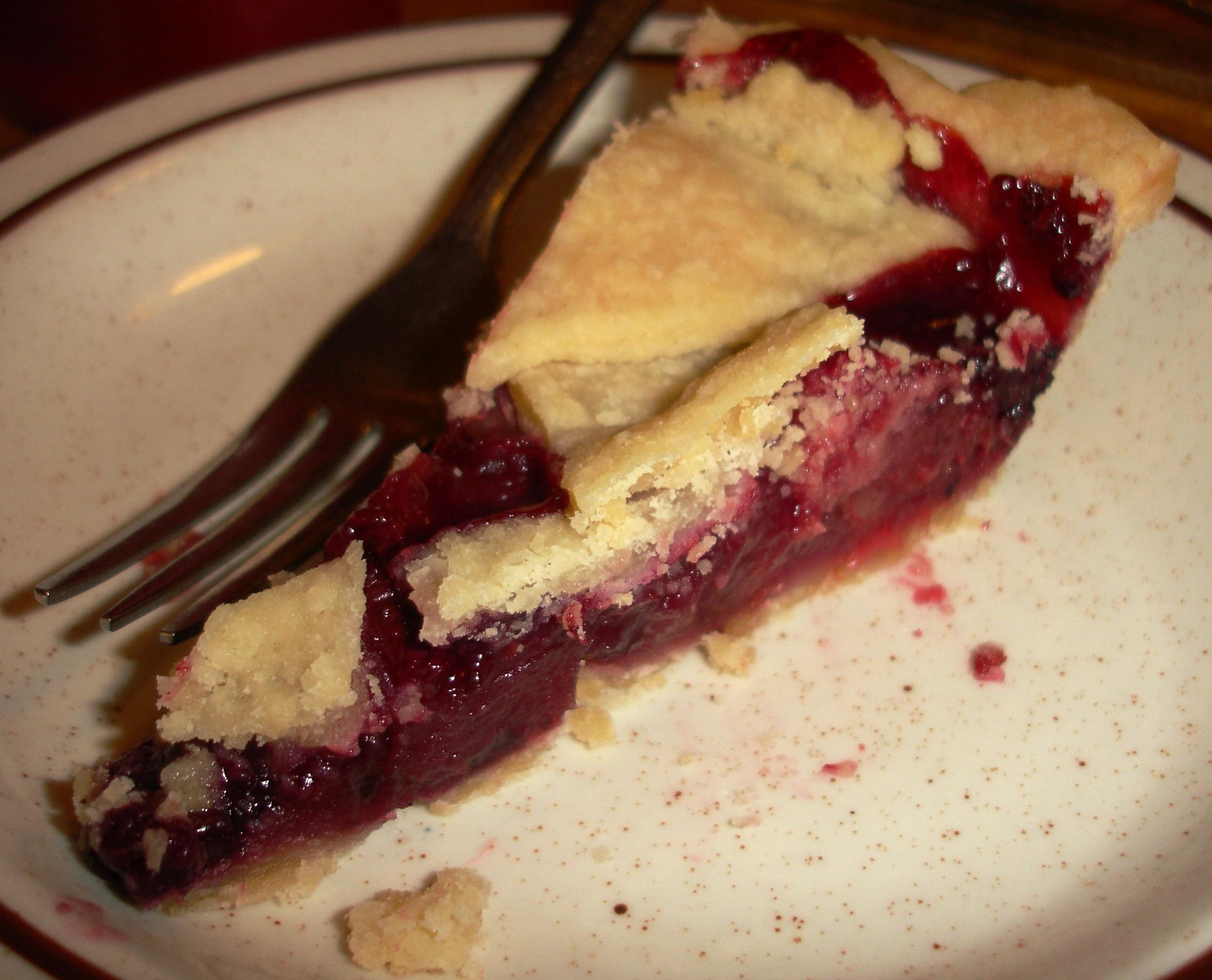 Pie servings here are not enormous, but this is half a wedge of three-berry pie, which was split for us in the kitchen.

Bluegill are a local, round and flat, freshwater fish. We have not seen them in any restaurant within a day’s drive of our home, though we’ll hazard a guess that Clay’s is not the only place around here that makes a specialty of the panfish. The fillets are delicate in both texture and flavor. Like the more frequently encountered Indiana lake perch, the bluegill are very lightly breaded and pan-fried, and served in a ragtag heap. The brief cooking, so as not to desiccate the thin fillets, results in a very pale crust but also a moist flesh. 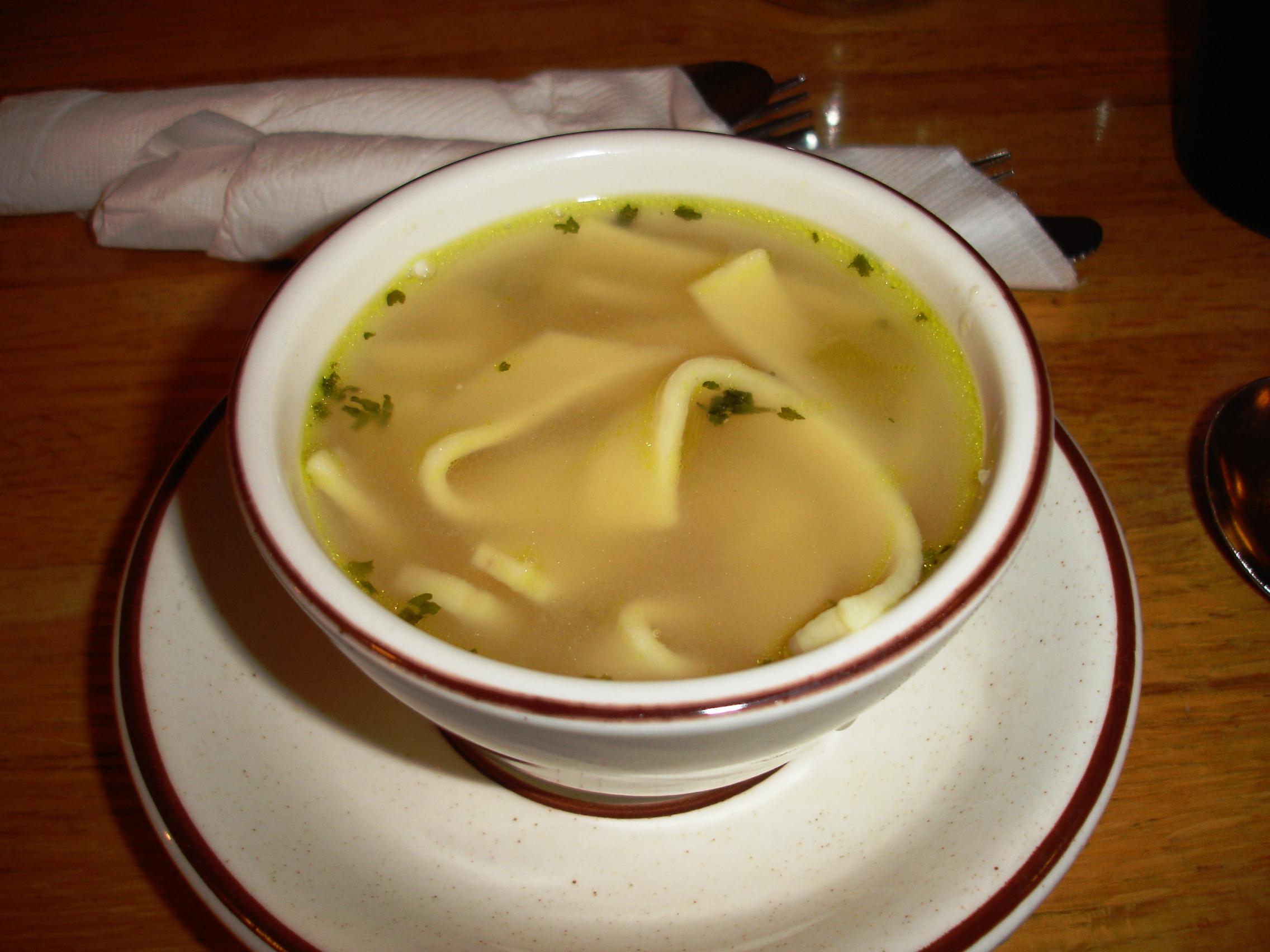 Homemade chicken noodle soup is on the salad bar.

There may be other gems on the menu but we can tell you that, of the other items we tried (except for the pie), everything was perfectly edible but ordinary. There were a few nice, homey salads on the salad bar, and poppy seed dressing too, but the standard fish fry is made with standard from-who-knows-where fish and shrimp. Stick with the bluegill if you’re having seafood. 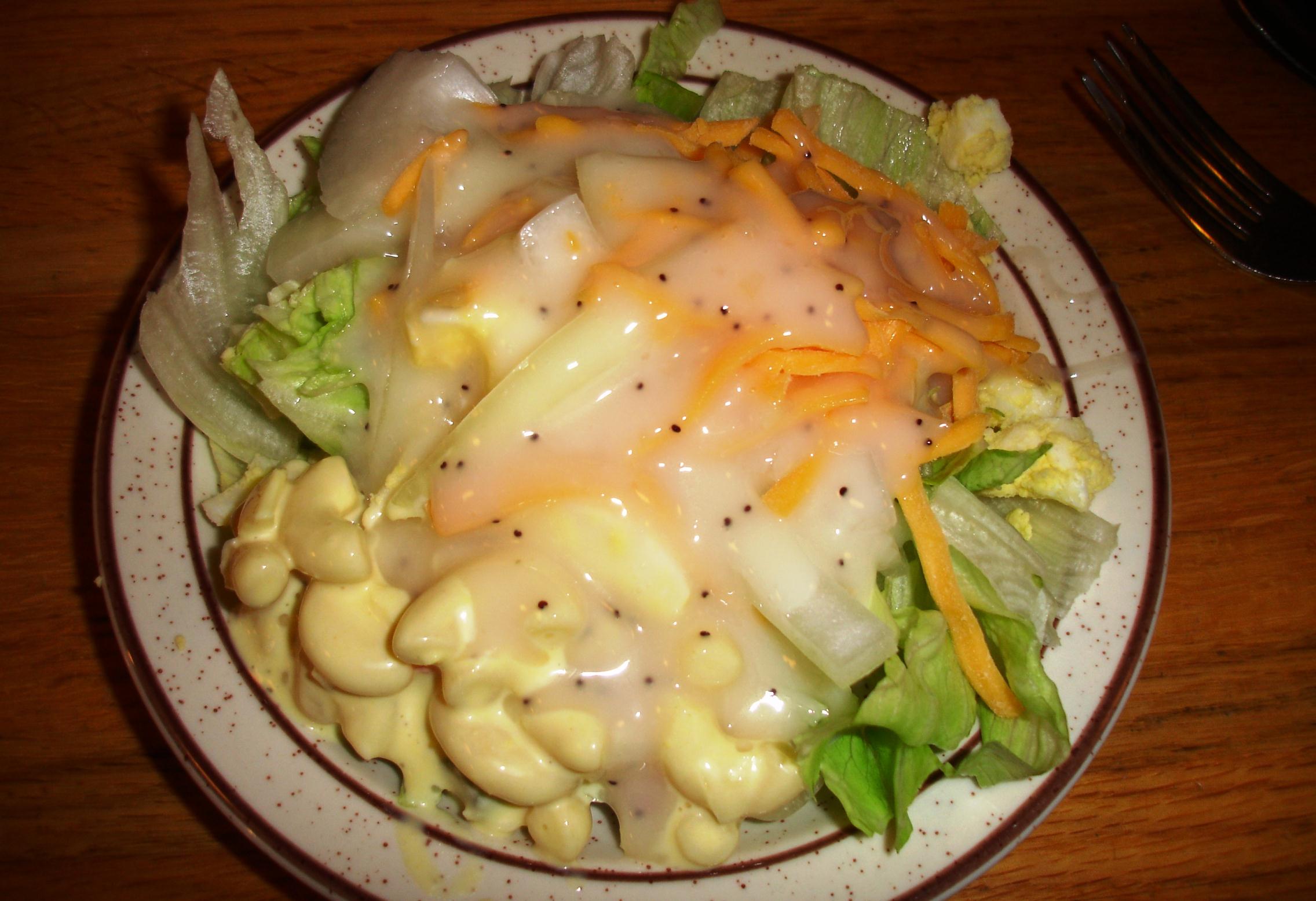 We know we’re not in the Northeast anymore: the salad bar features sweet poppy seed dressing.

Other promising-looking menu items include homemade chili, slow-simmered pot roast, and meatloaf with fried biscuits (those last two are daily specials). They also do a breaded tenderloin that might be worth a try. 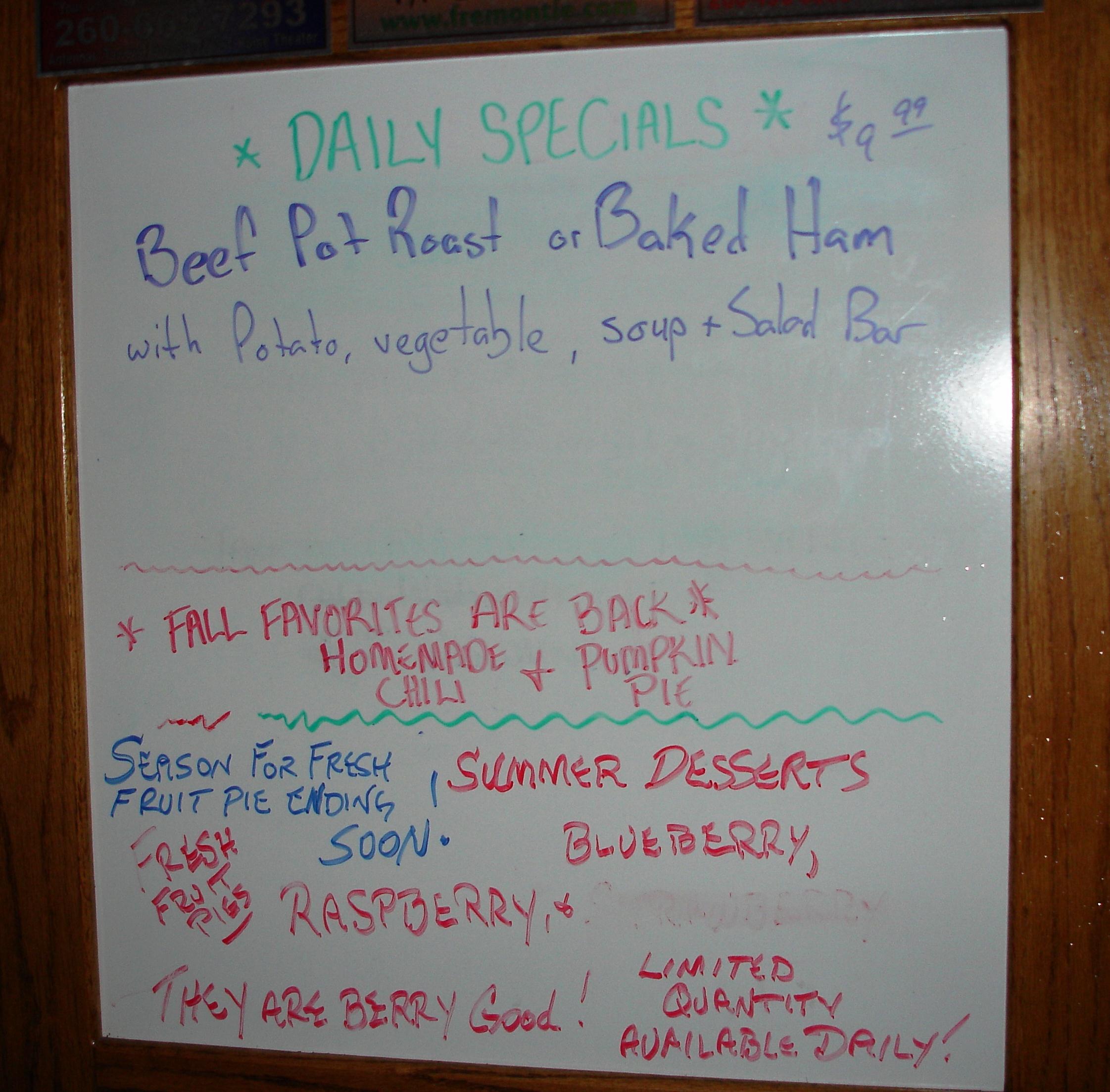 The pot roast we saw heading out to other tables looked mighty good.

Pie: they make a big deal here over their homemade pies, and it is with good reason. The tender crusts are filled with a variety of in-season fresh fruits and berries. They also make an assortment of cream pies, peanut butter pie, pecan pie, and pumpkin pie in season. 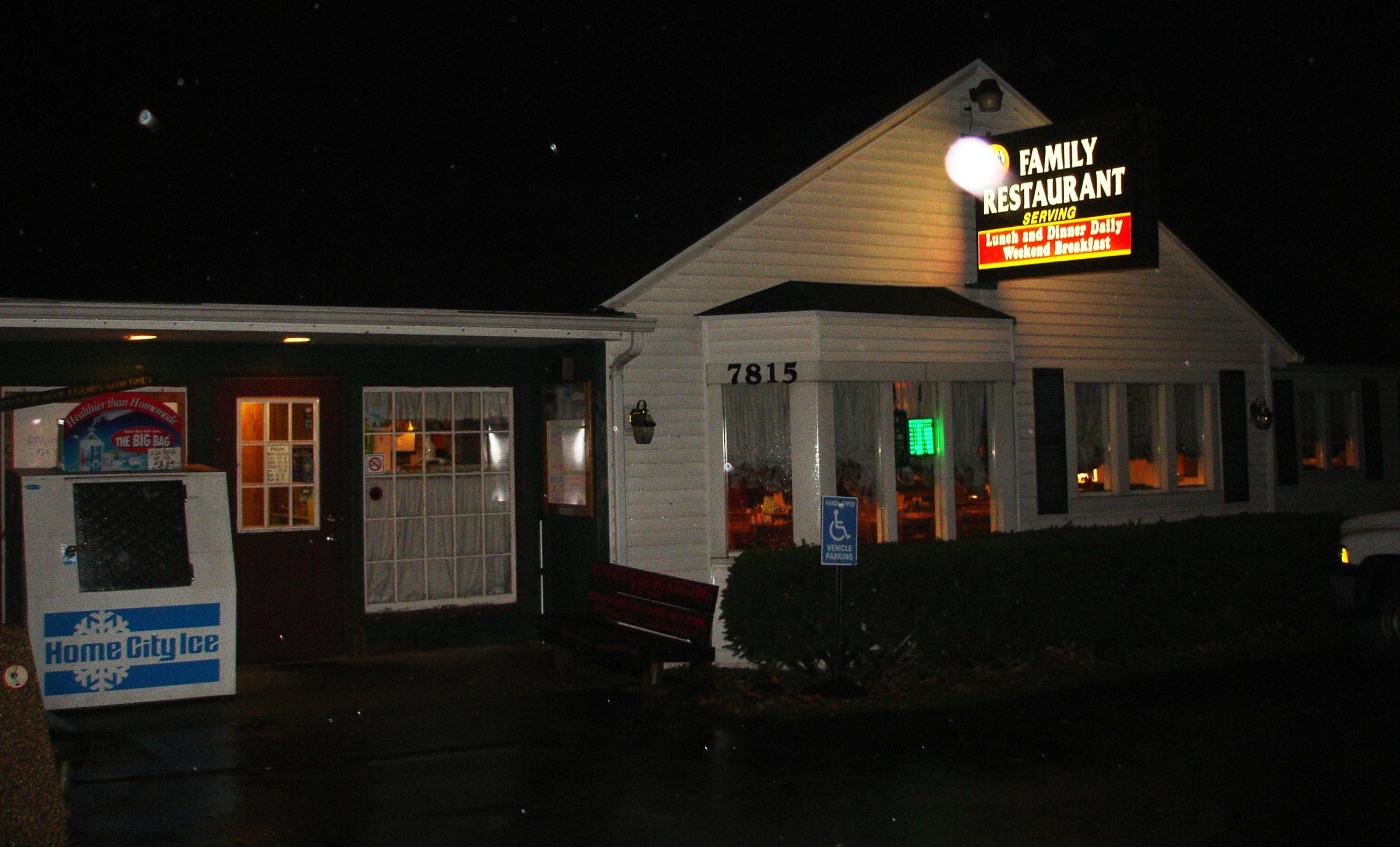 We recommend Clay’s for two things: pan-fried blue gill and homemade pie. Do you really need anything more than that?

The menu also features something they call Clay’s Signature Fruit Pies: “Our flaky crust is layered with a cream cheese mixture and chopped pecans.” This sounds like it might be too much gilding but our fresh blueberry version was sublime, with beautiful, juicy berries sitting atop a very thin layer of cheese and nuts. The result is more like an elegant tart than a pie. These pie wedges, by the way, are rather small, and we would not raise an eyebrow at an order of two wedges per person.

Clay’s is very popular locally, a brightly lit and casual eatery with a nice neighborhood buzz about the place. Service by young girls is ultra-sweet and accommodating. The restaurant is just south of the Indiana border with Michigan and alongside Lake George, minutes from the intersection of Interstates 80/90 and 69.