Our mini-cheesesteak tour of Philadelphia brought us to American Sardine Bar. Now we understood that the Sardine is by no means a cheesesteak joint – it’s an anti-hipster/hipster pub with a reputation for quirky quality bar food. Nonetheless we’d read that they served a mean cheesesteak done Pittsburgh-style with fries and slaw on the steak, and we felt like a beer, so here we were. And, of course, there was no cheesesteak on the blackboard menu. 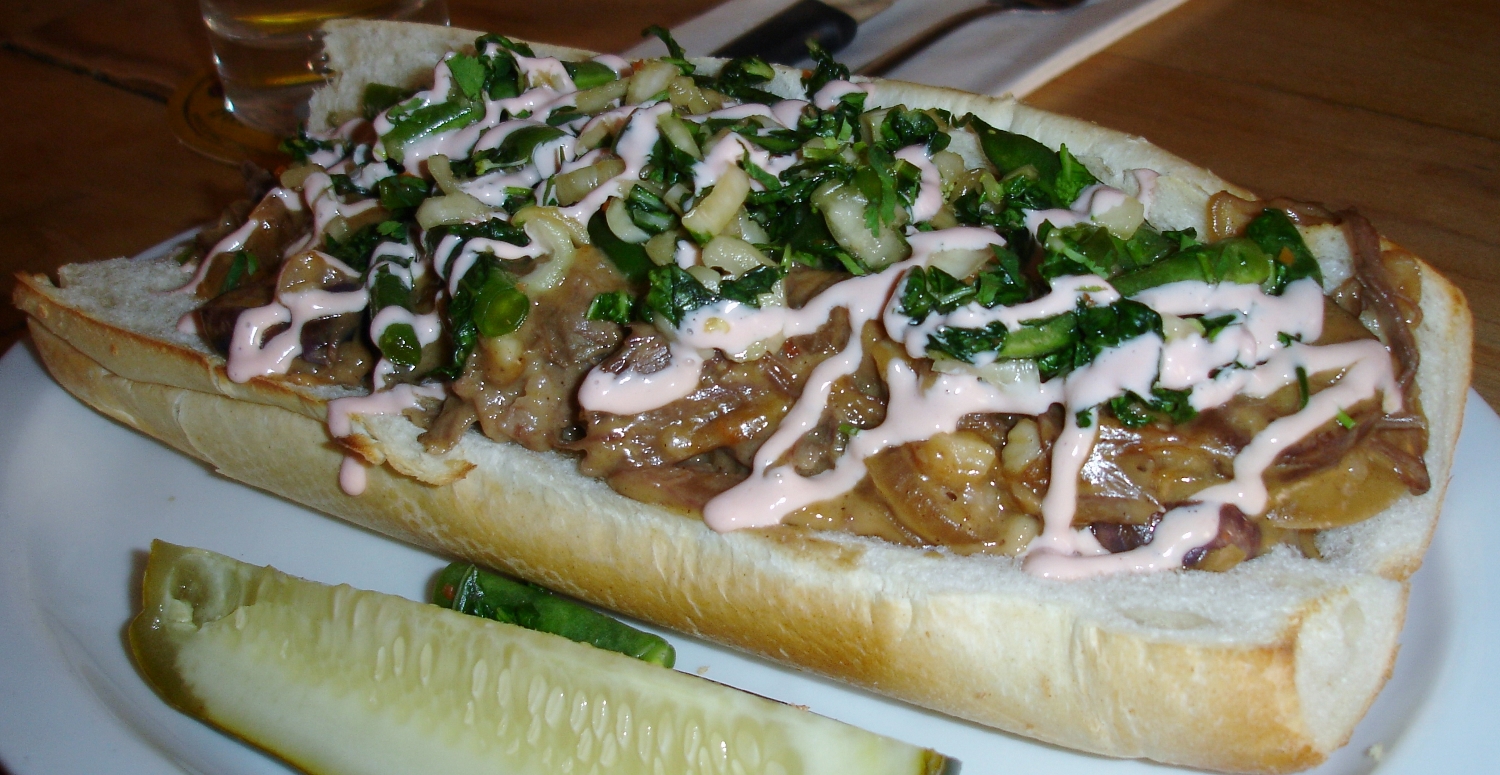 They laid the Philippine beef and vegetable stew known as kare kare in a roll, garnished it, and called it a banh mi. Good stew.

No matter, the menu had plenty of interesting offerings etched in chalk, so the three of us chose one to split: Neil Santos’ Kare Kare Banh Mi. There’s a lot of information to be intuited from that food listing, some of which we got right, most of which we did not. First of all, we had no idea who Neil Santos is (we later learned he’s a local pro photographer and friend of the house). 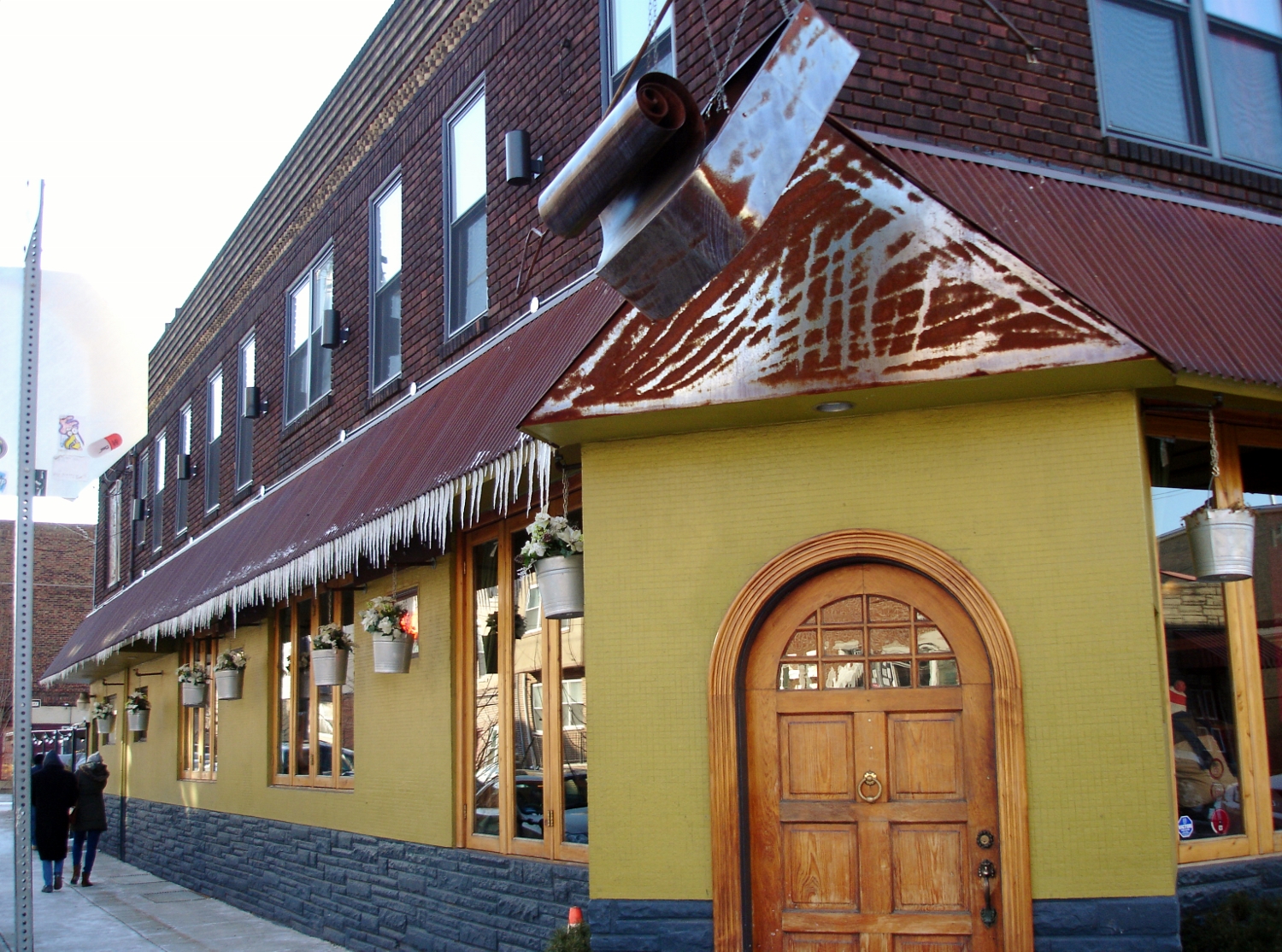 Check out those awesome icicles courtesy of the corrugated awning! Love the sardine can over the door.

“Kare Kare” – we suspected a Filipino connection because we know that, for some reason, many Filipino foods double up like that: halo-halo (a shaved ice dessert), turo-turo (a type of cafeteria restaurant), kwek-kwek (deep fried quail eggs), sapin-sapin (a rice and coconut dessert)… the list goes on. The word Kare made us suspect curry would play a part. And, of course, banh mi, which was the main draw. We expected some sort of Filipino curried take on a banh mi. Our bartender hadn’t tried it.

The only thing we got right was the Philippine connection. And, yes, it was a sandwich. But there was no curry and it most certainly was not a banh mi. So what did we eat? A Philippine short rib and vegetable stew in a peanut sauce on a roll. Man, were we far off!

Was it good? For those of us whose hearts were set on a cheesesteak and then a banh mi, there was some grumbling – the heart can change directions only so quickly. Bruce’s heart must be more fickle, because he liked the stew with its long-cooked fall-apart pot roast beef a lot. There were onions and green beans and eggplant and cabbage and cilantro and, we learned later, a fish sauce and lime mayo, with crushed peanuts throughout. We haven’t a clue as to why they called it a banh mi. Did it belong on a roll? No more or less so than our next pick off the chalkboard, the spaghetti sandwich, which got a roll of the eyes from our barman because he eats it all the time.

What is a spaghetti sandwich? After the banh mi, we expected all sorts of twists and turns. Wrong again! Turns out that a spaghetti sandwich is spaghetti. Between two slices of garlic bread toast. With a slice of mild provolone. 2 a.m. college dorm food, although both the spaghetti sauce and garlic bread were executed with more skill than a post-spliff teenager could muster. Quite honestly, it’s nothing that you can’t do, and haven’t done, just as well with last night’s leftovers.

Prices are such that if you don’t love the dish in front of you, you can move on to something else and learn for next time. And yes, you can get sardines sautéed, grilled, plancha (?), or fried, and a sardine sandwich will run you $2.

There’s an extensive and interesting beer list, but the American Sardine Ale on tap, brewed in Manayunk, pale in both color and flavor, had us switching to other choices for the second round. Yeah, we’d go back. We didn’t fall in love with either of our sandwiches but we also get the feeling that it was just the luck of the draw. And it’s a great old bar to boot, with personable bartenders.