The famous Creole restaurants of New Orleans – Galatoire’s, Brennan’s, Commander’s Palace, Antoine’s, Arnaud’s – are long-operating, historic institutions. Some of them, like Galatoire’s, are among the finest restaurants in the country, while some of the others are less so, but what they have in common is a traditional approach to Creole cooking. Upperline also serves Creole food and we think it is as necessary to a visitor’s survey of Creole cuisine as the best of the old-line restaurants, but it’s only been around since the 1980s and it takes a more modern approach to Creole cooking. 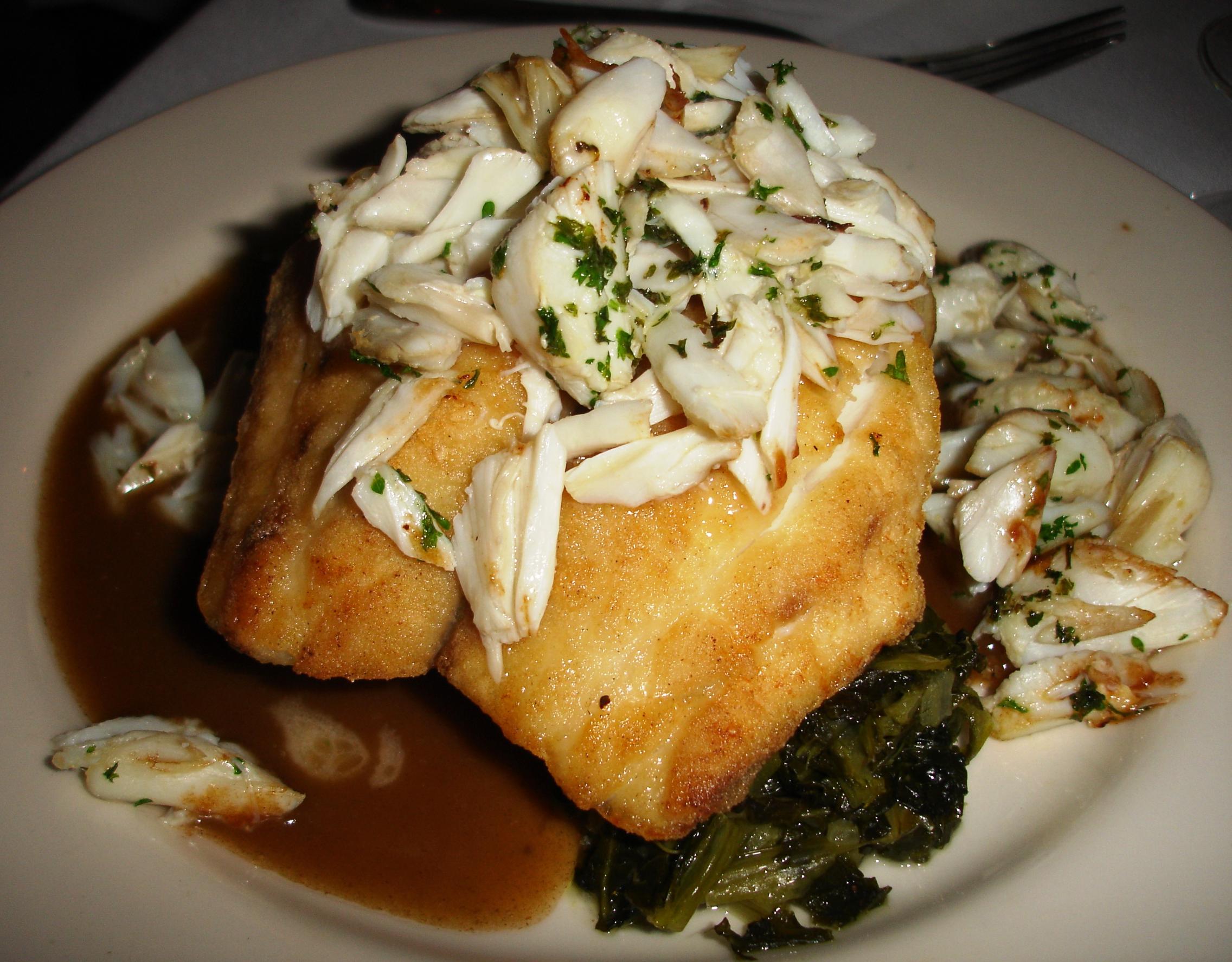 A yellow brick building in the part of town known as Uptown (if you are visiting from out-of-town, you’ll almost certainly have to drive), Upperline is very much the expression of owner JoAnn Clevenger, along with her chef Trent Osborne. Both are Louisiana natives, and while they clearly have a love for traditional Creole cooking, they don’t treat the classics like musty museum pieces. 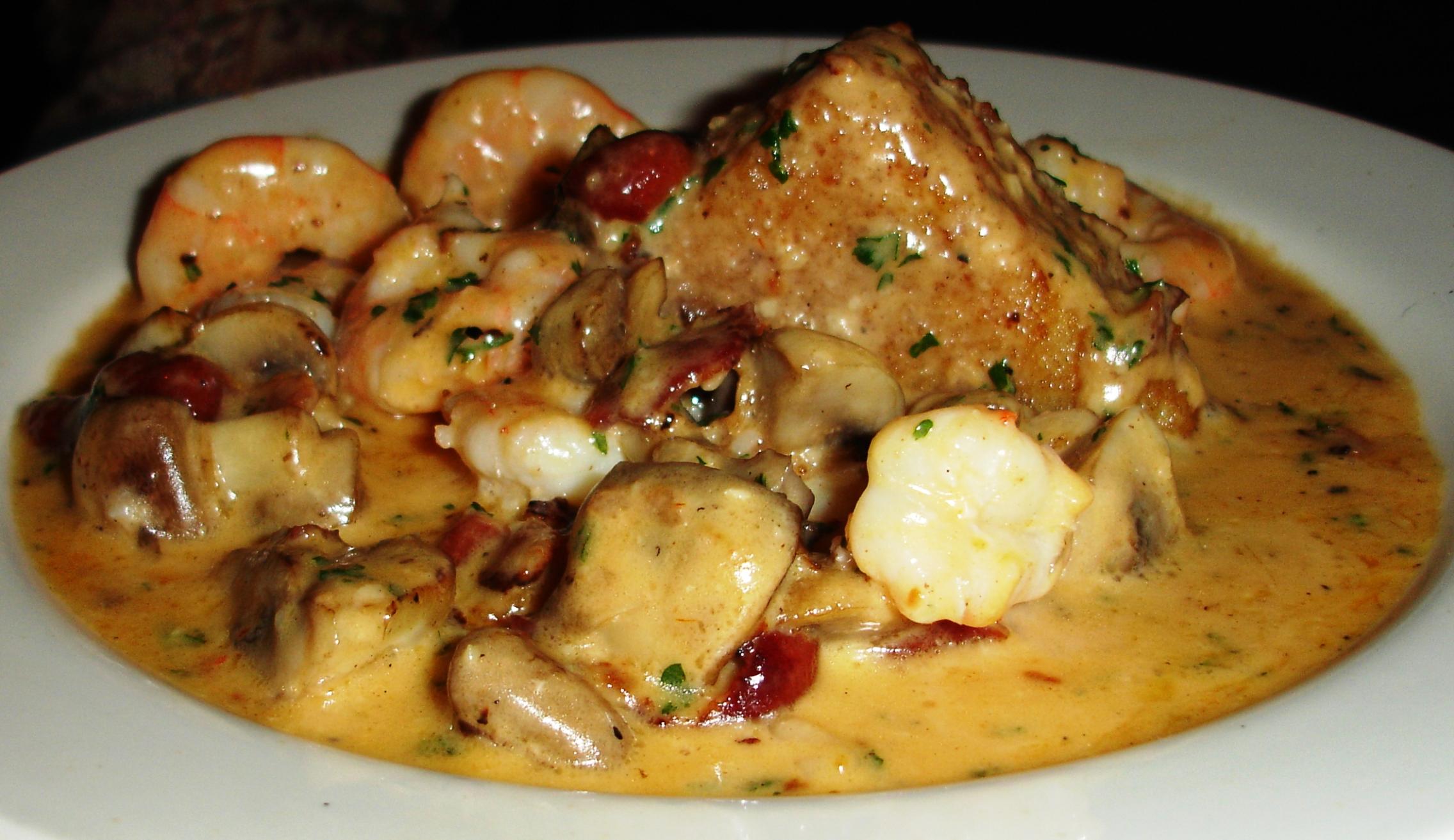 Cane River Country Shrimp is named for former chef Ken Smith’s childhood Louisiana home. If garlic, mushrooms, bacon, grit cakes, and shrimp aren’t enough to grab you, then we give up.

Start with an Upperline original: fried green tomatoes topped with shrimp rémoulade. The combination is found all over town but it was first served here, where it’s also at its best. Or sample the duck and andouille etouffee served with corn cakes and pepper jelly. The flavors just explode! You won’t find better fried oysters than those that make up the version called St. Claude, which are dabbed with a dark and complex sauce that includes garlic and citrus. 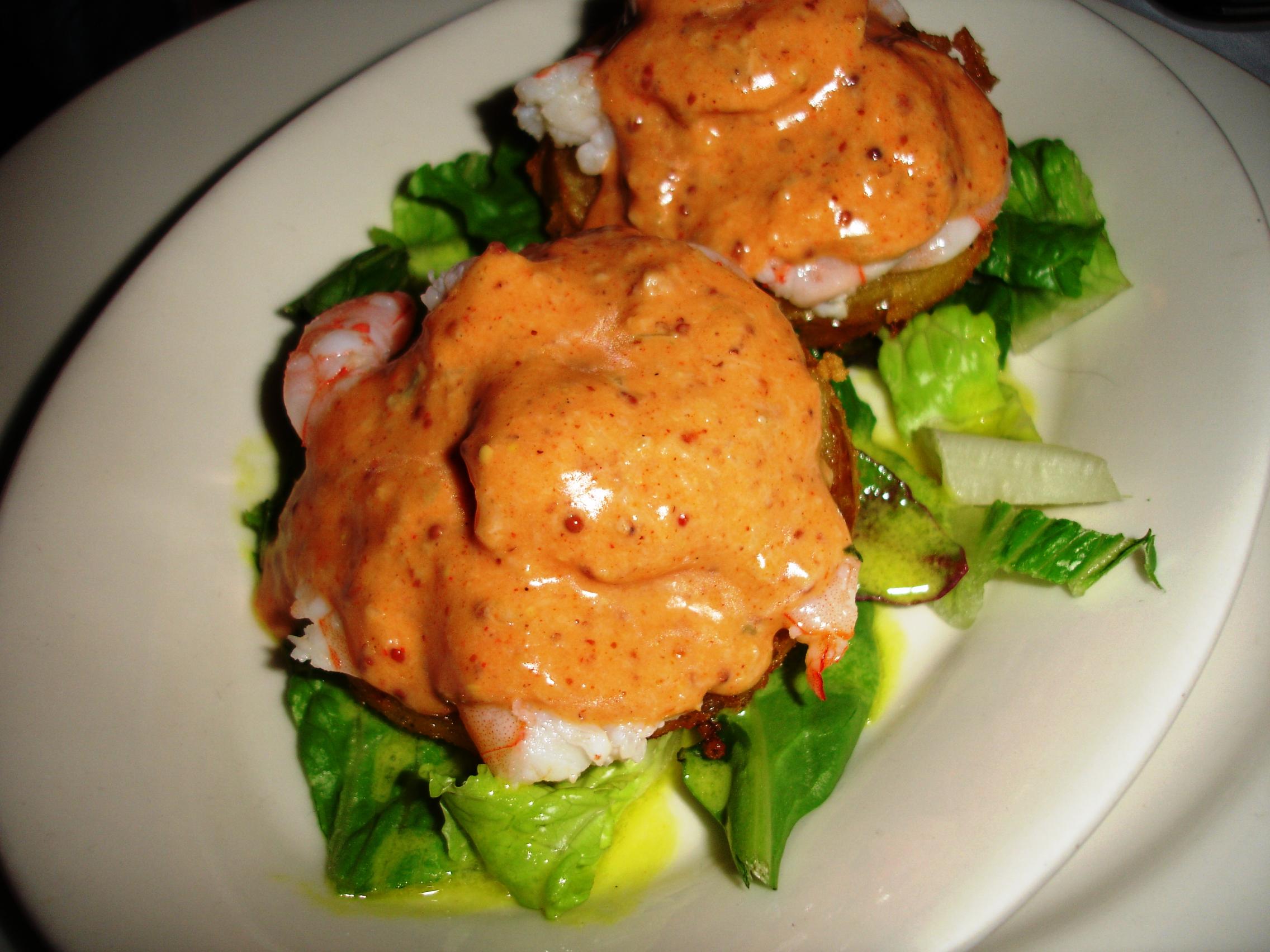 Fried Green Tomatoes with Shrimp Remoulade – sounds like it should have been around forever, but it was invented at Upperline.

JoAnn told us of a trip she took to Birmingham, AL, where she dined at the Hot and Hot Fish Club. That visit inspired her to create Drum Piquant and Hot and Hot Shrimp. Everything in the dish is hot, but not incendiary, though you can boost the BTU levels with the little pitcher of Habanero sauce served alongside for drizzling. This is fun food for pyros. 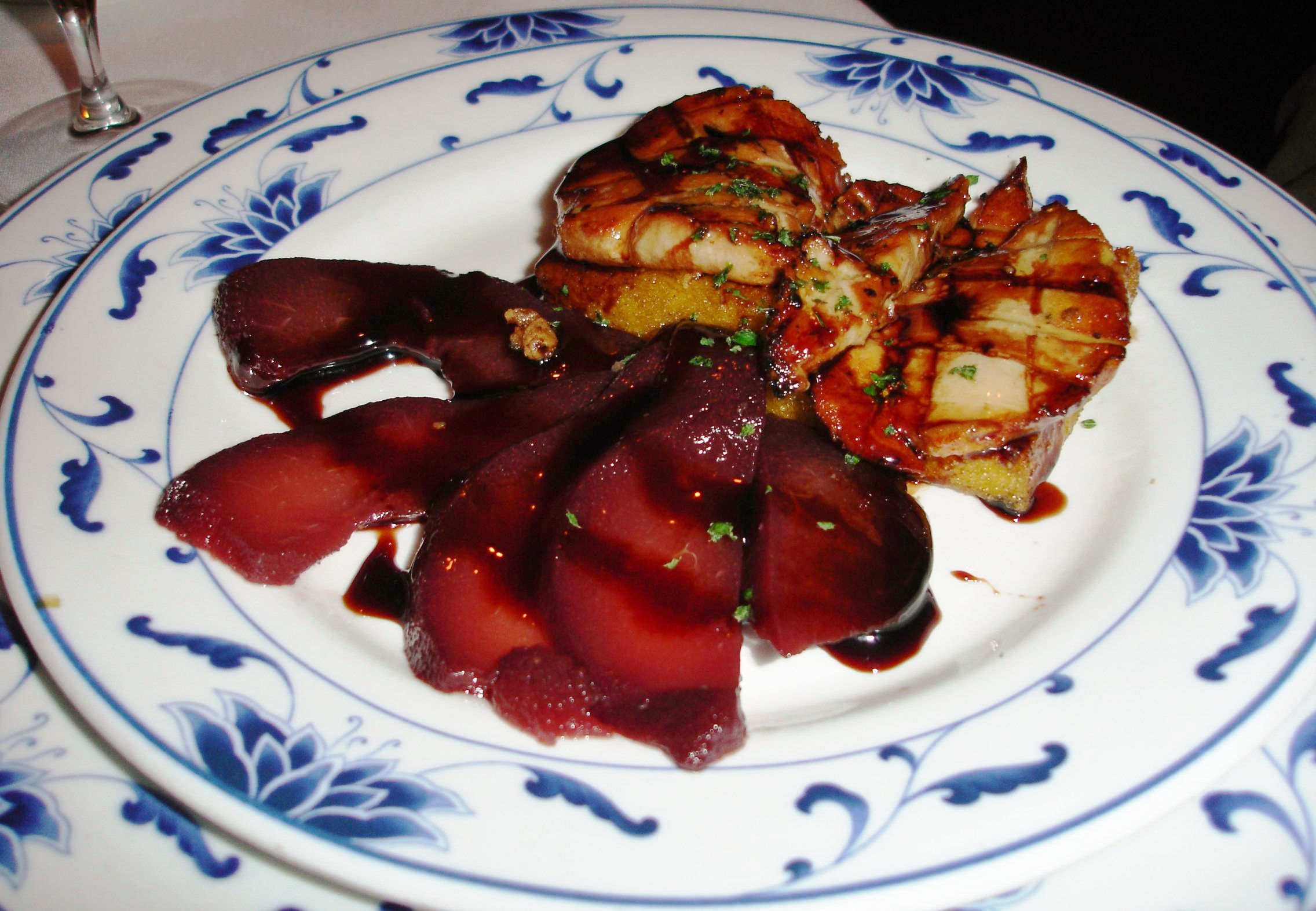 You can dine upscale on a dish of seared foie gras with fruit of the season which, during this fall visit, was wine-poached pears, or…

Or try the Cane River Country Shrimp for a mellower, but equally enjoyable, experience: the shrimp are cooked not a second too long and served in a creamy sauce well-populated with mushroom and bacon pieces (and garlic, lest you forget you’re in New Orleans), the whole shebang poured over creamy-crunchy triangles of grits cakes. 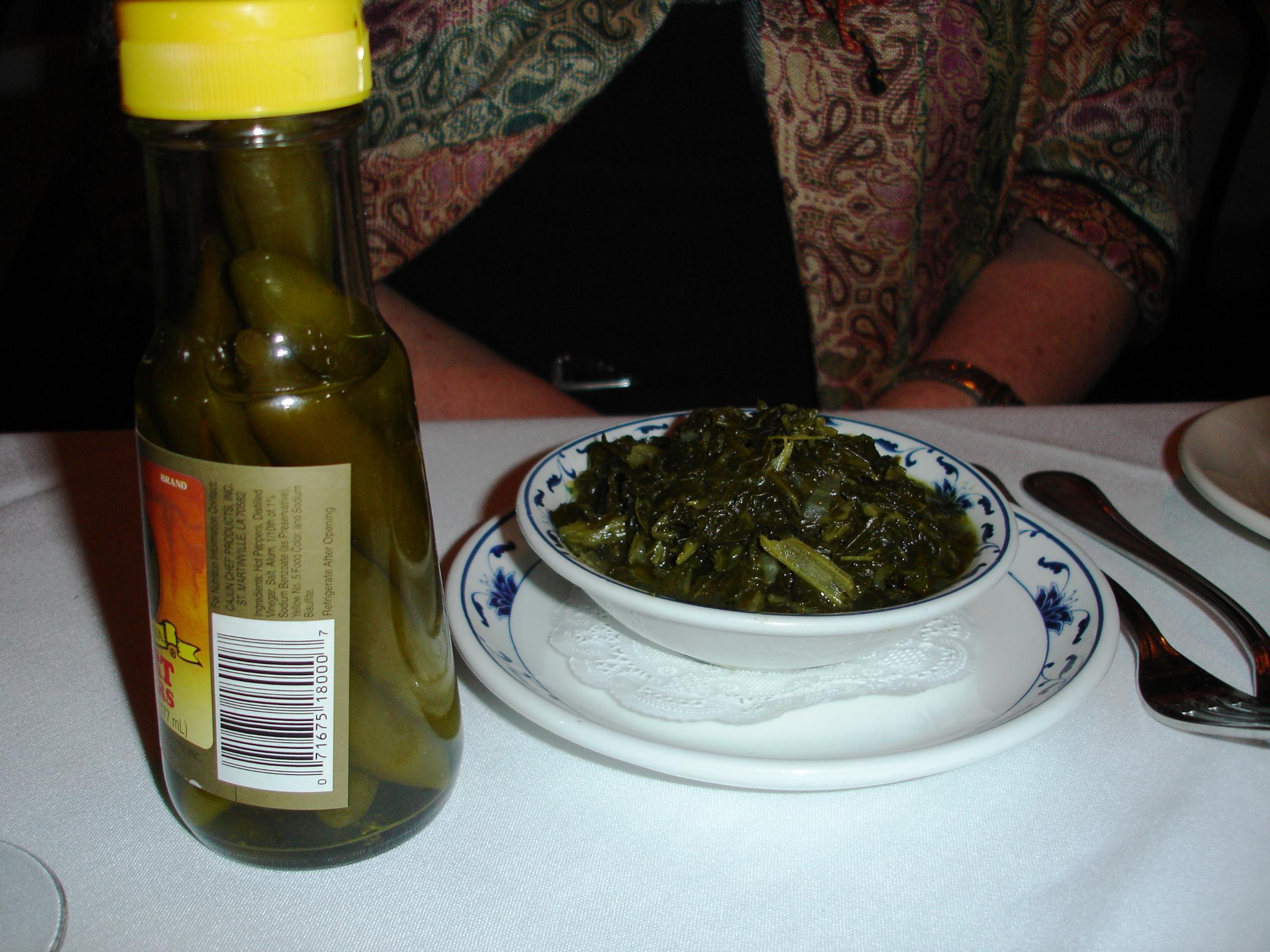 … you can enjoy a simple bowl of old-fashioned mustard greens (sided by vinegar peppers, of course).

The restaurant is packed floor-to-ceiling with the work of local artists and, in fact, Ms. Clevenger is a tireless booster of the local arts and dining scene. On our first visit to her place she gave us lists of her favorite local antiquarian and independent book shops, local art, antique shops, best places to go for incredible local smells (!), and even her favorite dishes at other restaurants (which range from sweetbreads at Bayona and bread pudding souffle at Commander’s Palace to late-night sliders at Krystal on Bourbon). 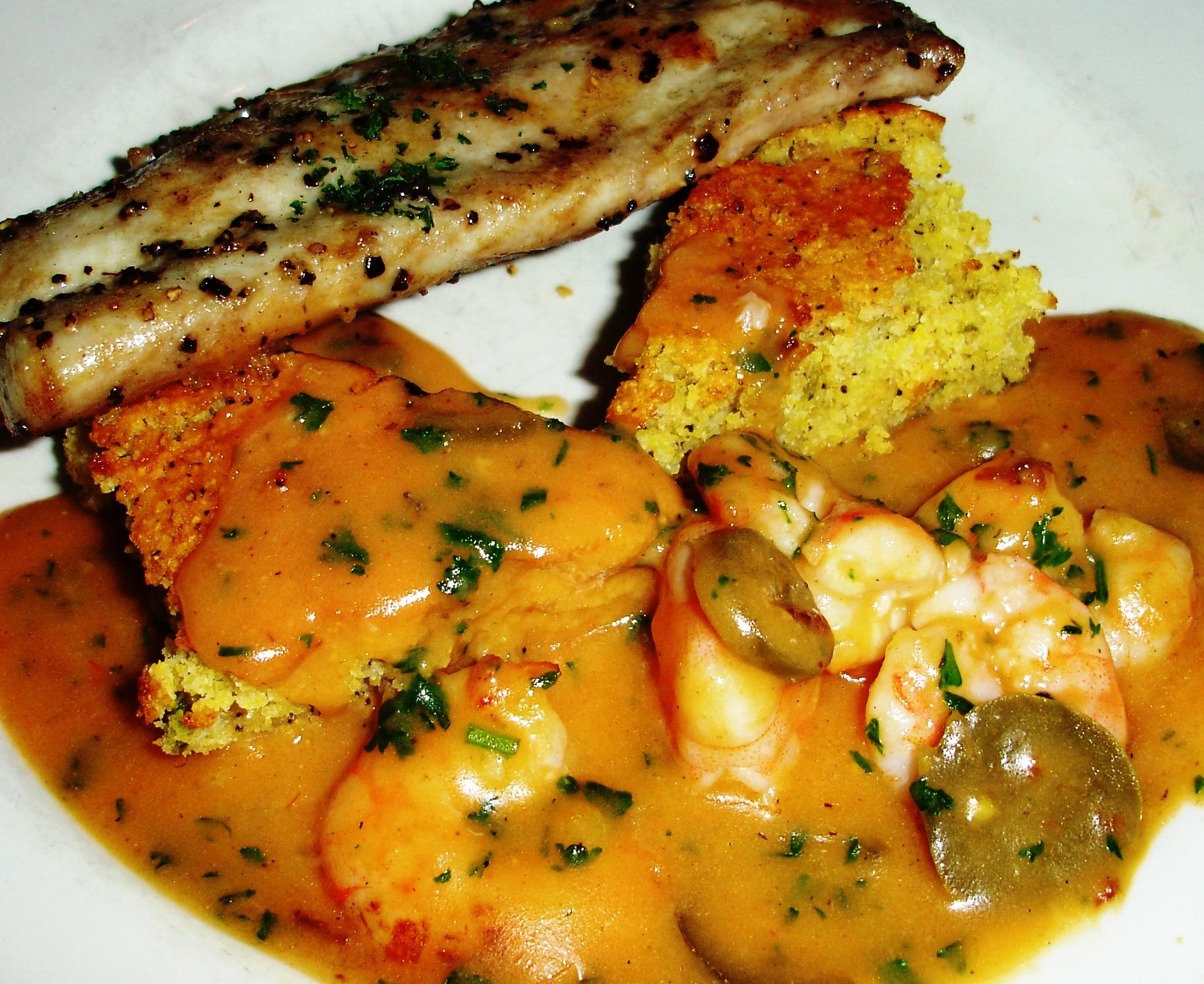 Upperline is a comfortable, relaxed restaurant with great food, and that New Orleans spirit of enjoying life to the fullest. 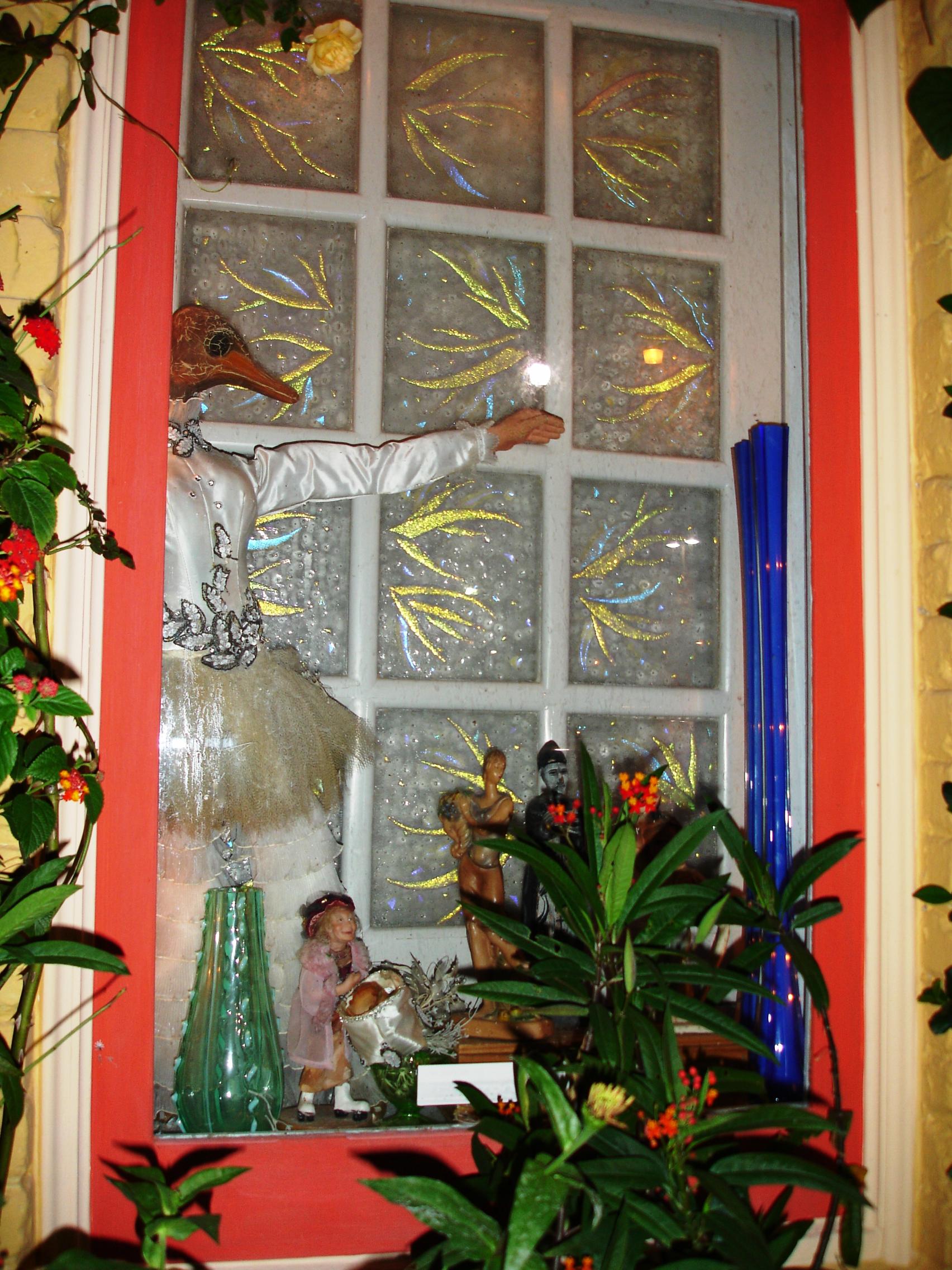 Upperline is also a visual feast. For die-hard LAF fans: Upperline shares a little visual sensibility with the defunct Lynne’s Paradise Cafe of Louisville, but it’s done with art instead of kitsch. 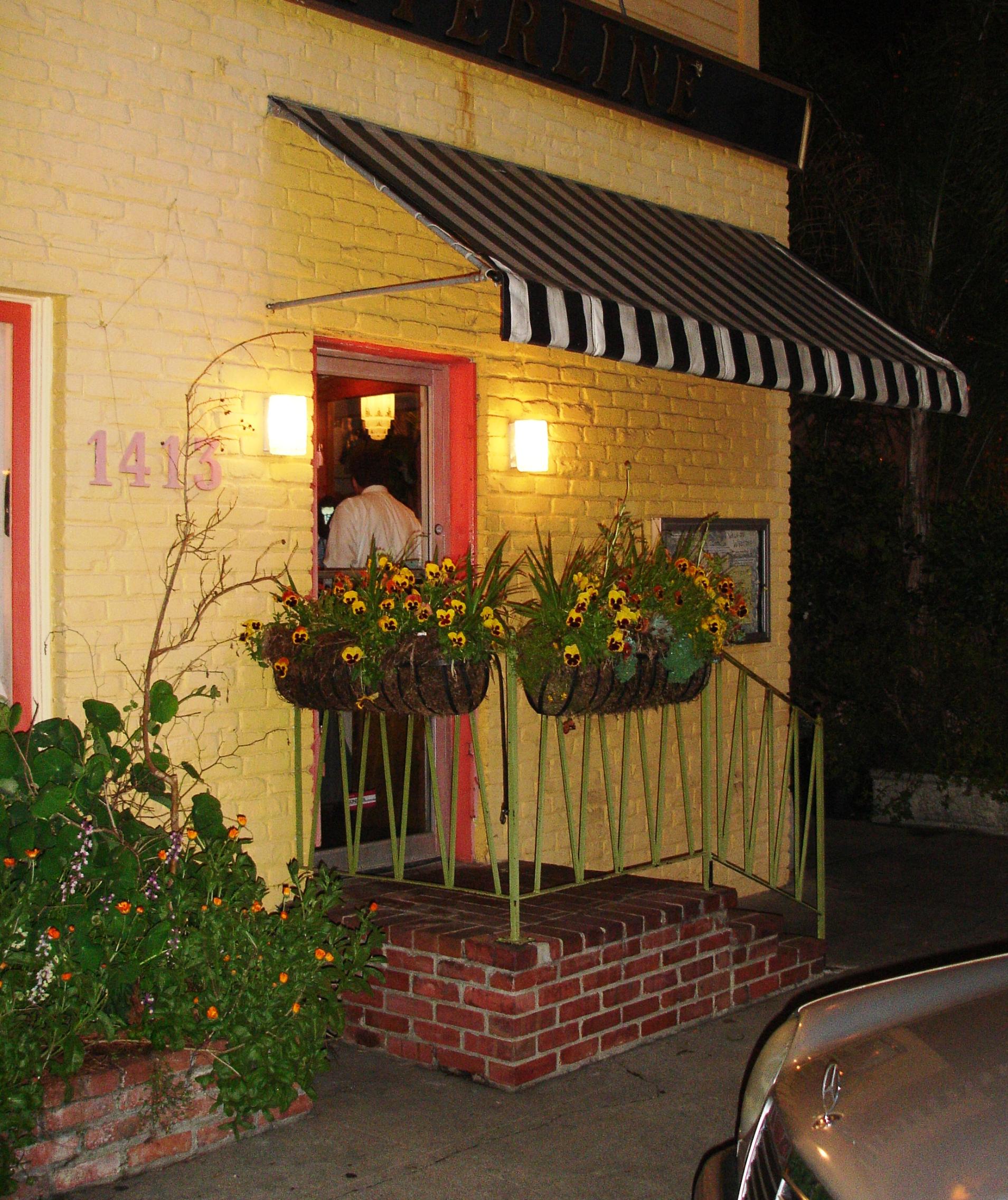