In 1962, Nicola Perrotti opened P&M Lunch in Oakville CT. It was here that Nicola perfected his pizza recipe. Uncle Nick’s nephew, Bill, opened Perrotti’s Pizza in 1988, in Middlebury, using Nick’s recipes and his own. Bill Perrotti achieved a national reputation for his quality pizzas. Bill sold his pizzeria in 2011 to pursue other paths in life, and an era of Perrotti pizza supremacy seemingly came to a close. 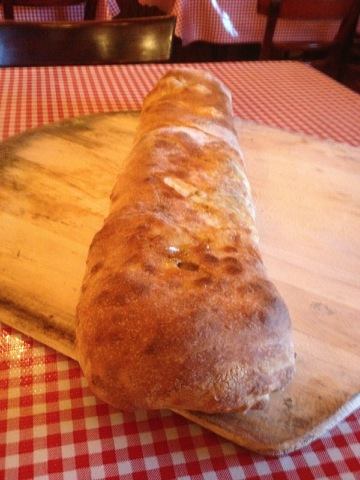 Not so fast! In October of last year, Neil Perrotti (who worked at older brother Bill’s pizzeria), along with his wife, Kristie, opened Perrotti’s Pizza in Watertown, less than a mile from Nicola’s original P&M. The menu features pizzas plain and fancy (the Loaded Baked Potato features sliced potatoes, sour cream, crumbled bacon, cheddar cheese, and chives; The Blue Moon is topped with caramelized onions, Gorgonzola, green olives, and olive oil). We haven’t yet been to the new Perrotti’s. Any readers tried it? Would Nicola be proud?