Here’s an idea for your next New Orleans trip: stop in at an historic pub with a French connection and enjoy a British cocktail along with a sandwich invented a few blocks away, have some Creole food on the side, and finish up with an Italian dessert. This can only be the Napoleon House, at the corner of Chartres and St. Louis in the Vieux Carré. 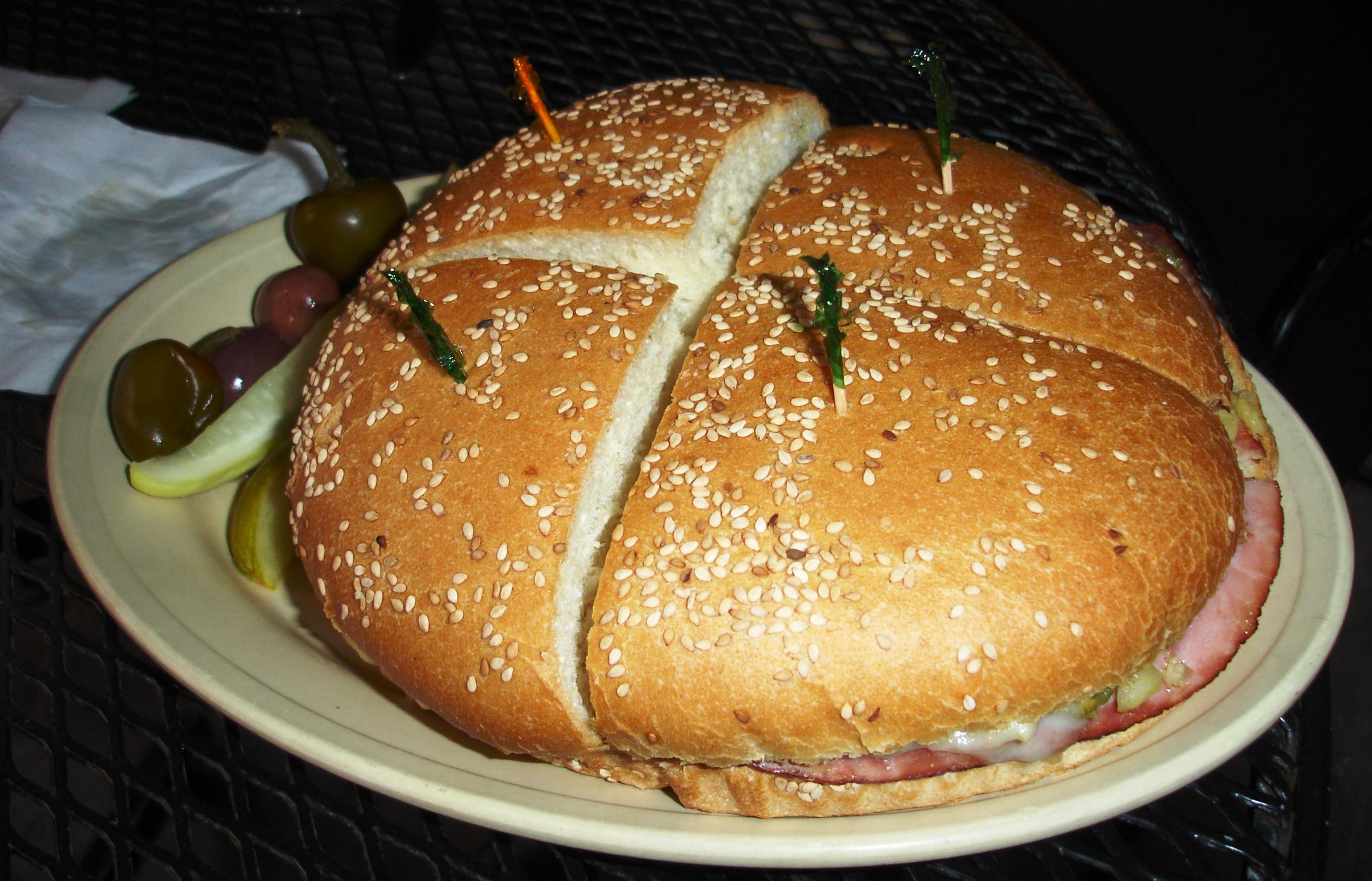 A whole muffuletta is plenty for two.

Built in 1794, the National Historic Landmark came into the possession of New Orleans mayor Nicholas Girod in 1814, who is said to have hatched a plan to spirit the exiled Napoleon to the third floor of his home to live out the rest of his days. Said plan was foiled by Napoleon’s death in 1821, but the Napoleon appellation for the home has lived on ever since. 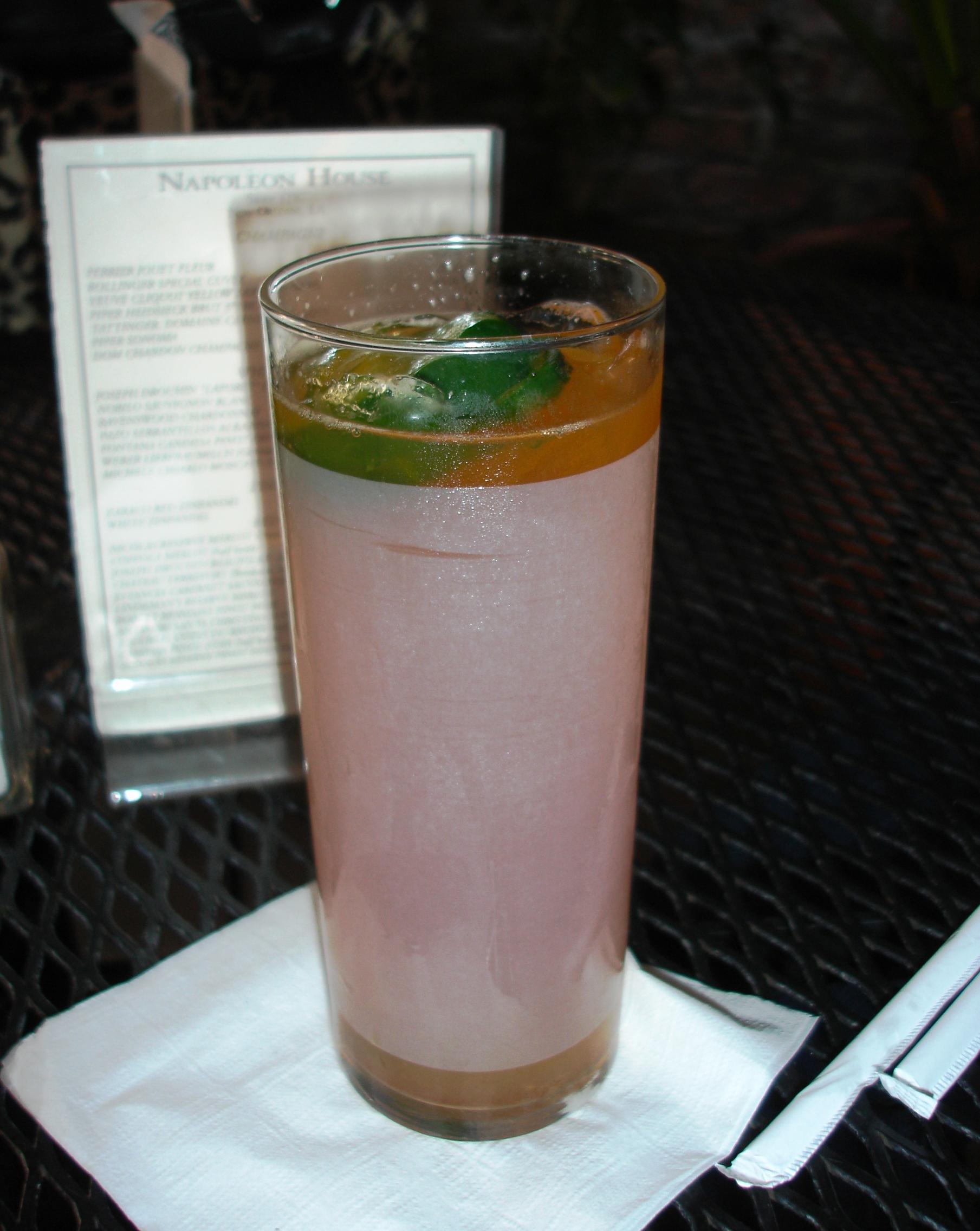 The house drink here is the Pimms Cup, made with a spirit called Pimms No 1 Cup, combined with lemonade, 7 Up, and a cucumber garnish. It’s a supremely refreshing summer tonic reminiscent in taste and appearance to iced tea, probably most closely associated with Wimbledon.

New Orleans is associated with an inordinate number of cocktails, many actually invented in the city, like the Sazerac, or the Hurricane, or that brunch favorite the Brandy Milk Punch. Some are inextricably tied to a particular restaurant, like the Pimms Cup and the Napoleon House. Why, we have no idea, but everyone in town knows that if you want a Pimms Cup (invented not in New Orleans but in England), the Napoleon House is the place to go. It’s a classic summertime refresher (the cucumber garnish is a dead giveaway). 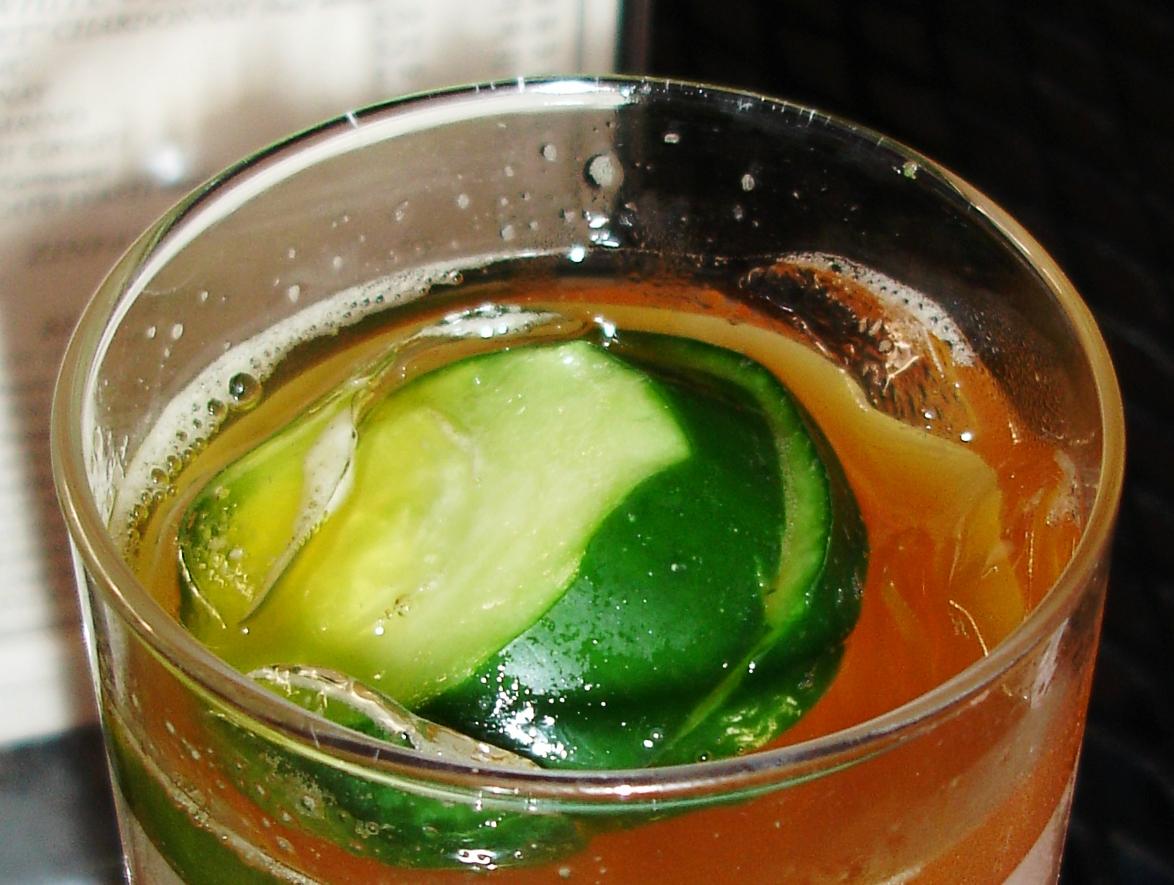 What at first appears to be a lime wedge is really a cool slice of cucumber.

The Italian cold cut and olive salad-stuffed round bread loaf known as the muffuletta was created at the Central Grocery, also in the French Quarter. There are those who will decry a heated muffuletta as an abomination. Let them get their sandwiches elsewhere; for the rest of us, the Napoleon House toasted muffuletta is a pleasure to tear into. 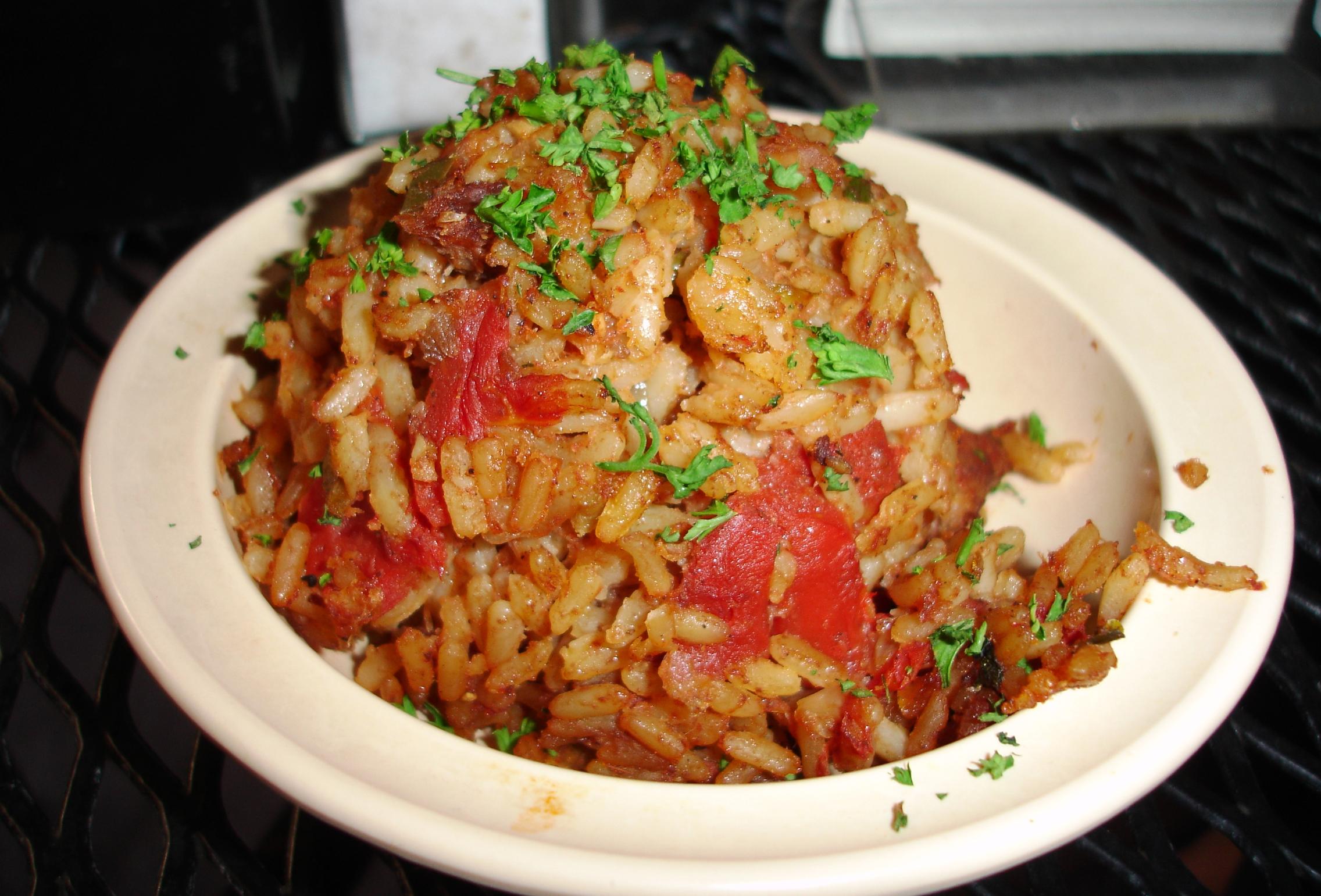 Scoops of Creole jambalaya are available as a side with your giant Italian sandwich.

The olive salad here is mellower, speaking more of celery than olives. Add to that the melted cheese and crunch of the toasted loaf and the effect is totally different from that of a Central Grocery muff. 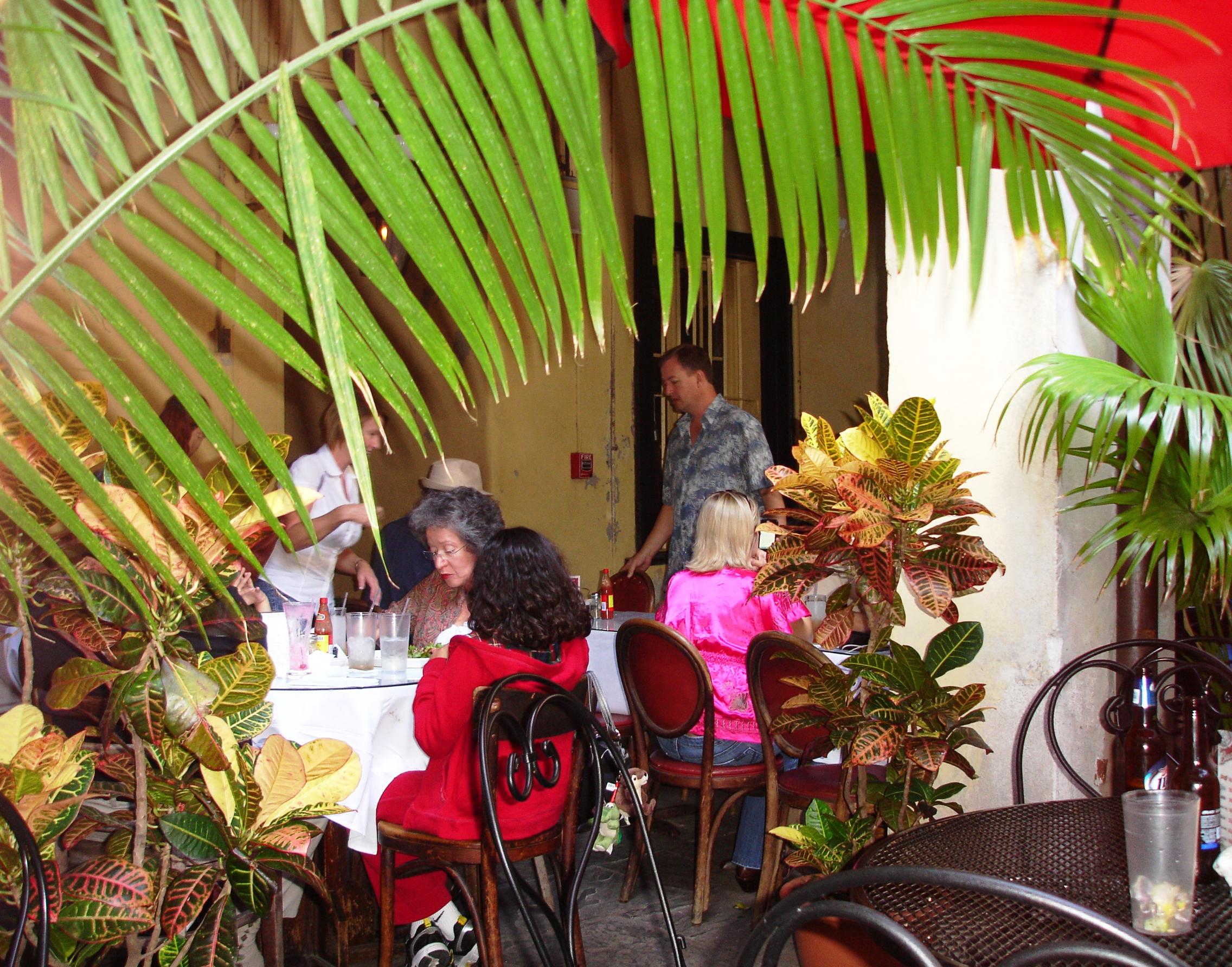 Inside Napoleon House is a dark, historic pub. In the back is a very pleasant courtyard. The restaurant/bar is extremely popular with visitors to New Orleans.

The menu also includes a variety of “poor boys” (usually known around town as po-boys), and a few local favorites like red beans and rice and gumbo, but most of the rest of the menu consists of things like salads and sandwiches of no particular provenance. The dessert menu features spumoni, cannoli, tortoni… you know, like you’d find in a Little Italy café. Of course. 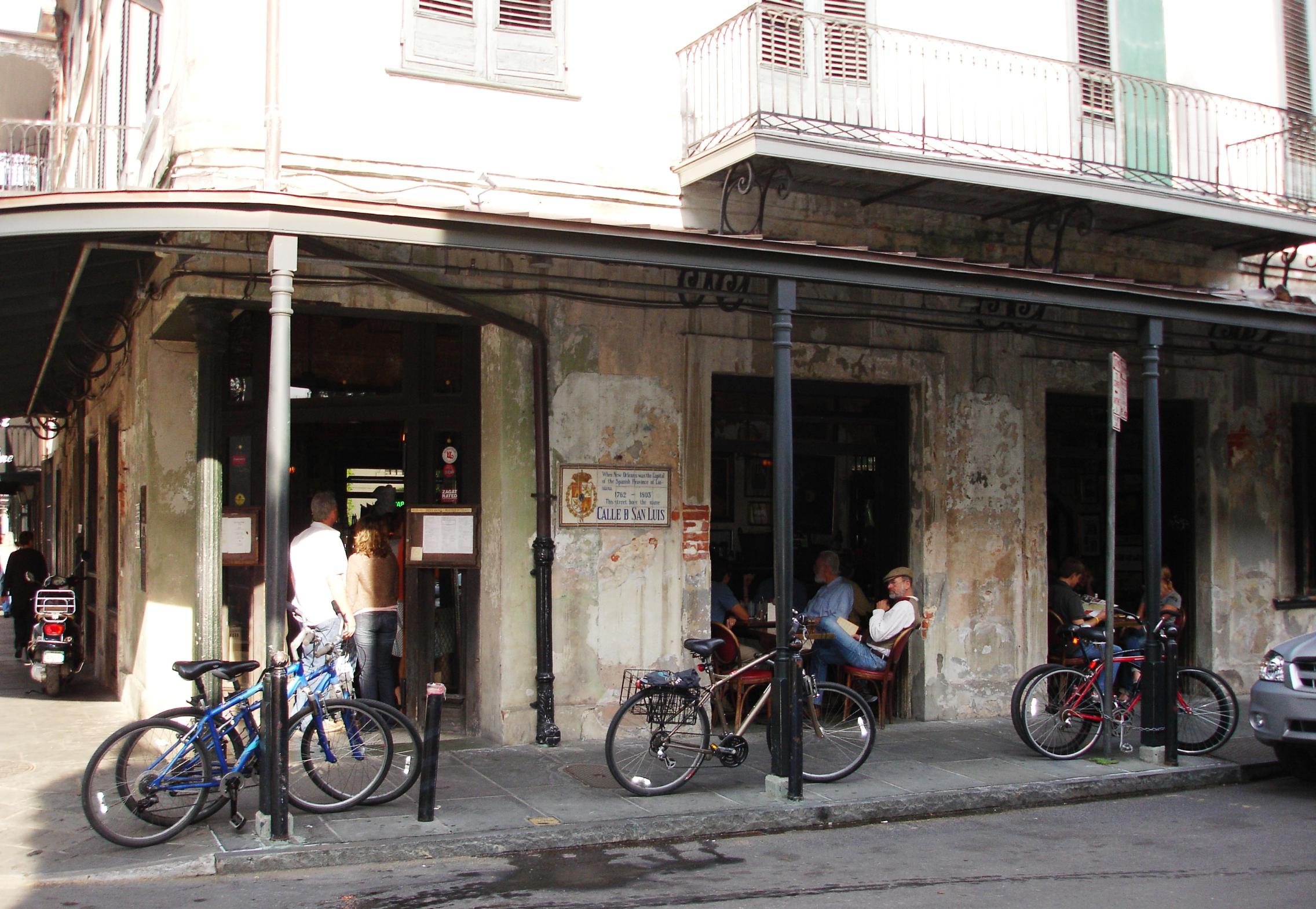 The stuccoed brick French colonial Napoleon House was built in the late 18th century. The scene, to us, is as much Rome as France or New Orleans. 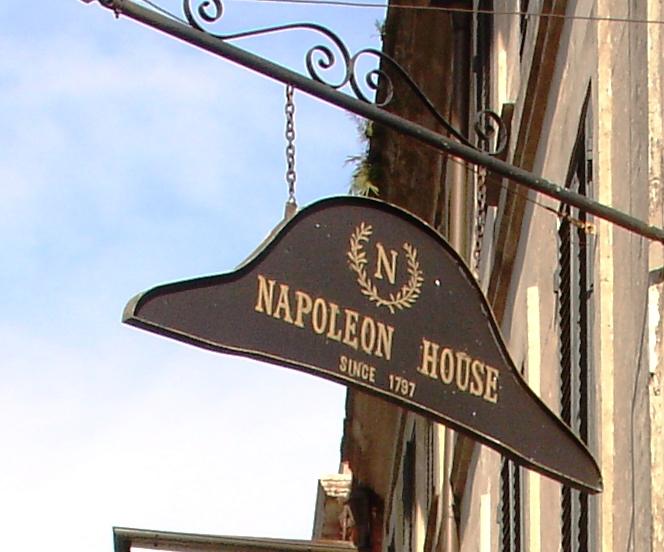 Now where have we seen that distinctive shape before?