Sally’s Apizza of New Haven is for sale, sort of. We wrote a bit about the subject last month because New Haven pizza fascinates us and, although we’ve never dined at Sally’s (we’re Pepe’s white clam fanatics), we recognize that it holds a significance in the story of American pizza almost equal to that of Pepe’s. Well, the Sally’s drama has made it to the pages of The New York Times and, while there’s very little substantive information in the story that we did not already know (save for the fact that a judge has freed Sally’s owners to find a new buyer if they choose), Sally’s current state of affairs is summed up nicely. 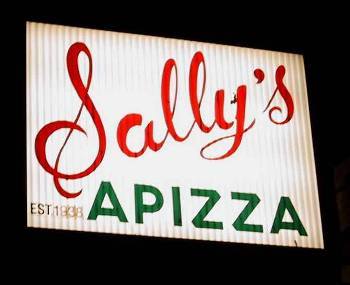 We enjoyed learning that New York Mayor Bill De Blasio and family dined at Sally’s in September with his son, who is attending Yale. The Consiglios said he was “a real regular guy, a real nice guy.” When Flora Consiglio, wife of founder Sally, died a few years ago Hillary Clinton (a Yale graduate) sent the family a condolence letter on Secretary of State stationery. Garry Trudeau, of Doonesbury fame, discovered Sally’s while he was a student at Yale in the ’70s. He’s never been to Pepe’s. That’s often how it is – it seems few folks patronize both pizza legends. Like other devotees of New Haven pizza we’re anxious to see how the sale of Sally’s plays out.