Published in 2002, Robb Walsh’s Legends of Texas Barbecue, Recipes and Recollections from the Pit Bosses is nominally a cook book but in reality a tour through the varied world of Texas barbecue. For those who view the story of Texas Q as the story of smoked brisket and beef sausage, the book is an eye-opener, revealing the Lone Star State’s wide-ranging smoked meat traditions. Mr. Walsh has just released a revised edition of his book (with a slightly revised title: Pit Bosses has been changed to the slightly more egalitarian Pitmasters). 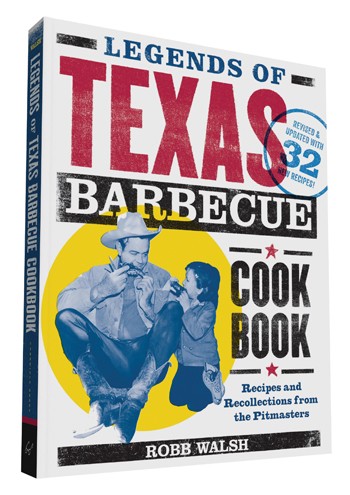 In addition to 32 new recipes, you’ll find entries that include the newest, wait-hours-in-line BBQ pits like Franklin in Austin as well as features such as Ten in the City, his list of his favorite urban barbecue spots, which includes Angelo’s of Fort Worth. Read more about the new edition (and get a recipe from the book, Railhead’s Barbecued Bologna Sandwiches) in this Fort Worth Star-Telegram story. You can place an order directly with the publisher here.