The show aired for one season, 22 episodes in 2010. The Travel Channel’s Food Wars would pit a city’s two big players in a local signature food item against each other, and, amazingly enough, name a winner. Perhaps that’s why the show lasted only one season: it’s hard to see how any iconic restaurant would allow itself to be named a loser on national TV. The inaugural episode took place in Buffalo, NY, where Anchor Bar faced Duff’s in a Buffalo wing competition. Anchor is generally thought to have invented the hot wing, while Duff’s is Anchor’s most famous competition in the region. 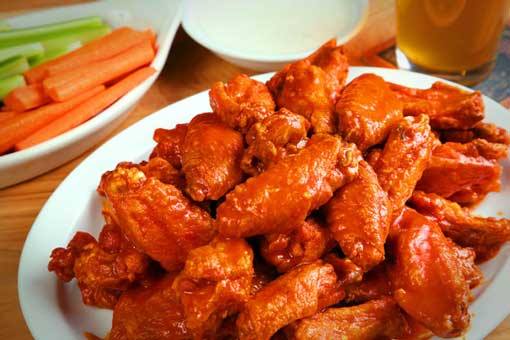 Anchor Bar uses roaster wings, which are larger than the jumbos used at Duff’s. (Larger is not necessarily better.)

A few things we learned: Duff’s wings are smaller, yet they are fried longer, which would lead one to believe that they are more well-done. We find that interesting because we’ve found Anchor’s wings to be crisper. Duff’s wings are certainly hotter and saucier – maybe all that sauce softens the crunch some. It’s been a few years since we’ve been to Buffalo but we left the city with a preference for Anchor’s wings. That said, it was our impression that local popular opinion favors Duff’s.  Buffalo Journal posted the entire Buffalo wings Food Wars episode. Have a look.