A very pleasant surprise! We really didn’t know what to expect from a dinner hosted by the South Jersey Wagonhouse Winery when we signed up, but certainly not one as enjoyable and accomplished as the one prepared by Chef James Malaby. Chef Malaby’s own restaurant is named blueplate (lower case theirs), which can be found about five minutes up the road from Wagonhouse in the community of Mullica Hill.

“CROP @1401” EGGPLANT & GOAT CHEESE LASAGNA PICKLED VEGETABLE HOLLANDAISE SAUCE: Sliced Whole Roasted Beef Tenderloin. There was lots of trading at the table between those who don’t eat beef and those who don’t eat chevre. The least interesting of the three courses, but the beef was nicely crusted and the pickled vegetable hollandaise was a stroke of brilliance that elevated the tenderloin into something special.

Wagonhouse Winery is located, oddly enough, in the dry town of South Harrison (if we recall correctly, Jack Daniel’s home county in Tennessee is also dry). Wagonhouse, founded in 2004, grows their own grapes in South Jersey for their nine dry wines. What gave us pause, however, is their lineup of twelve sweet fruit wines, sold under the Three Boys label (the couple who own the winery have three sons). For example, Nutty Quaker is a red wine with chocolate, coffee, and coconut. Kick in a Glass is made from tomatoes and hot peppers. We really aren’t wine snobs — we even enjoy sweet fruit wines — but still… coconut??? 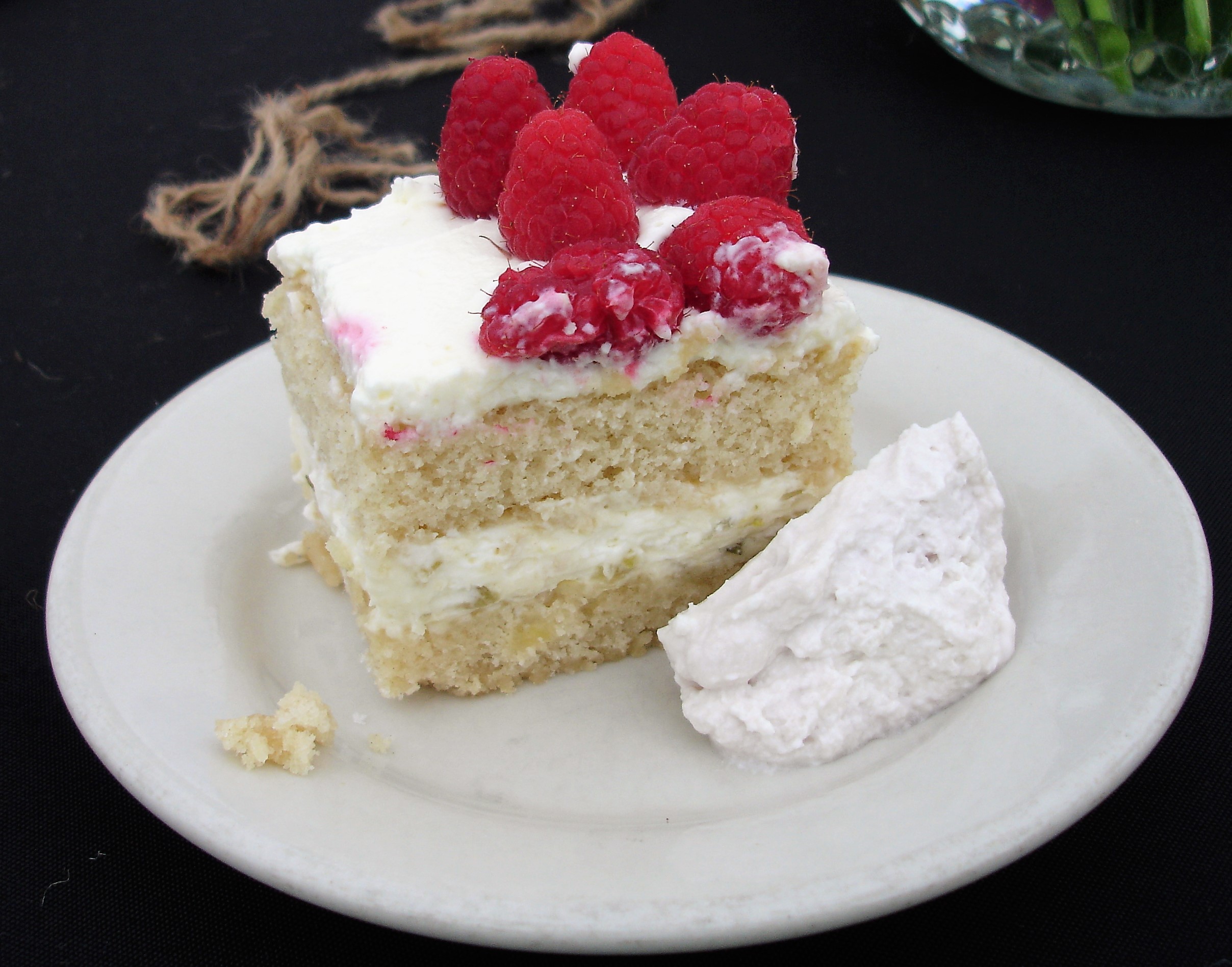 “CROP @1401” RASPBERRY & FENNEL COCONUT CAKE : Raspberry-White Chocolate Coconut Cake Nutty –Quaker Praline Chantilly Cream. Spectacular and fascinating! The fennel – was it candied? Greenish flecks of the vegetable lent its distinctive anise flavor to the cake. We assume they used Wagonhouse’s Nutty Quaker wine in the cream; if so, it was added with a judicious hand. We’d love to have this again.

The vineyard dinner, coconut wine or not, was beautifully executed, using fresh produce from the winery’s own farm/garden. The meal began outdoors, under cover, with wine and canapes. We don’t have photos of the hors d’oeuvres because we really weren’t planning to post about the dinner. It was only after the stunning nibbles that we realized this would be a meal worth writing about. 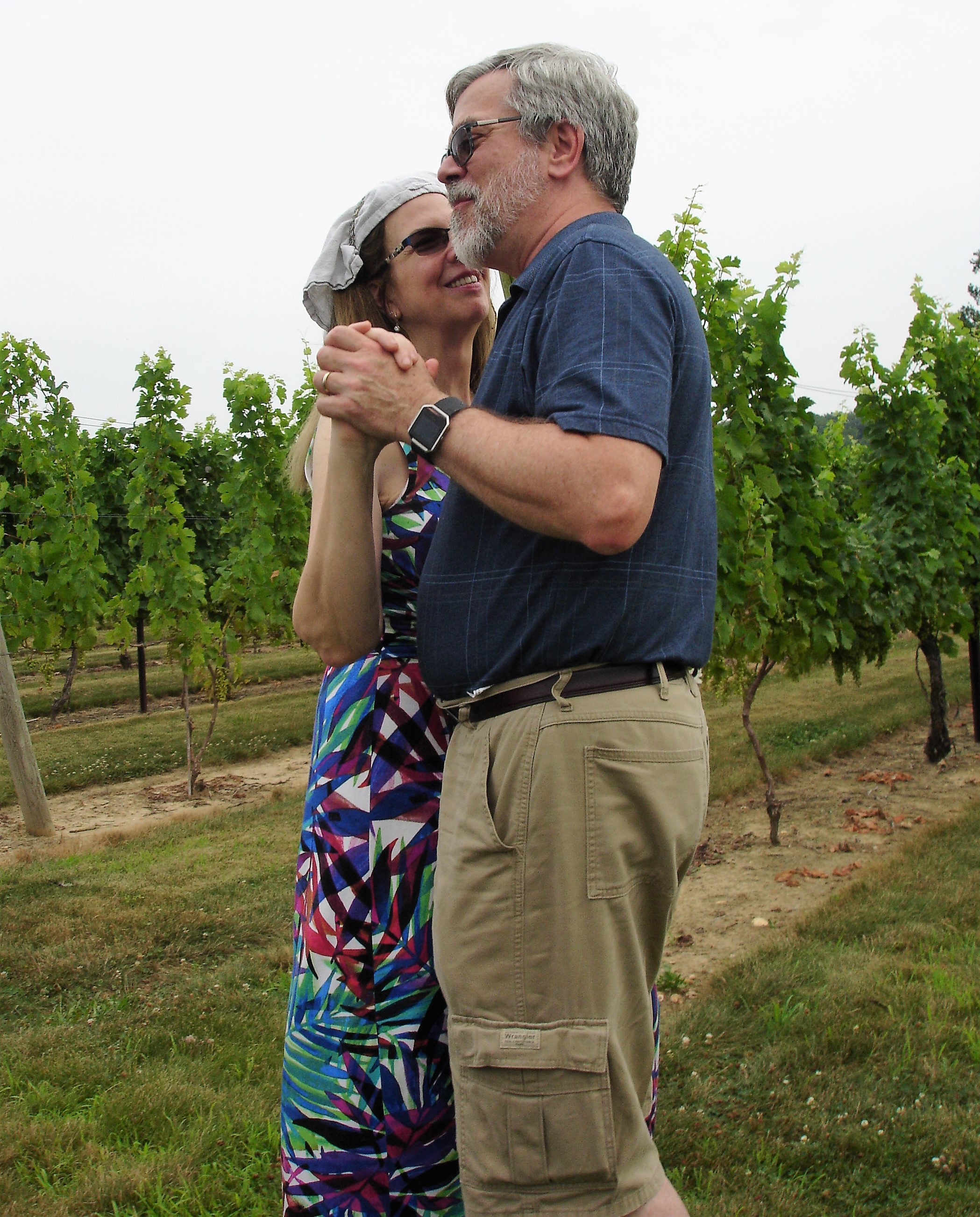 Sue’s brother and sister-in-law did their best to make the best of a bad music situation, dancing among the vines.

Here are the hors d’oeuvres presented (everything designated “Crop @1401” referred to produce that was harvested from the winery’s own garden, run by “the Brown boys,” sons of the couple who own the winery):

They were all well-conceived and realized but the crowd favorite was probably the shooter, which were little shots of sweet, creamy broth hiding a nugget of sweet crabmeat. The Buffalo zucchini was better than we expected because the slice of zucchini was at that perfect, elusive point between crunchy and raw, and limp and watery. Someone was watching these very carefully in the fryer. The cantaloupe was beautifully ripe, the johnny cakes were addictive with their smoked vegetable tapenade, and the duck barbecue had us searching for a bowl of the stuff. 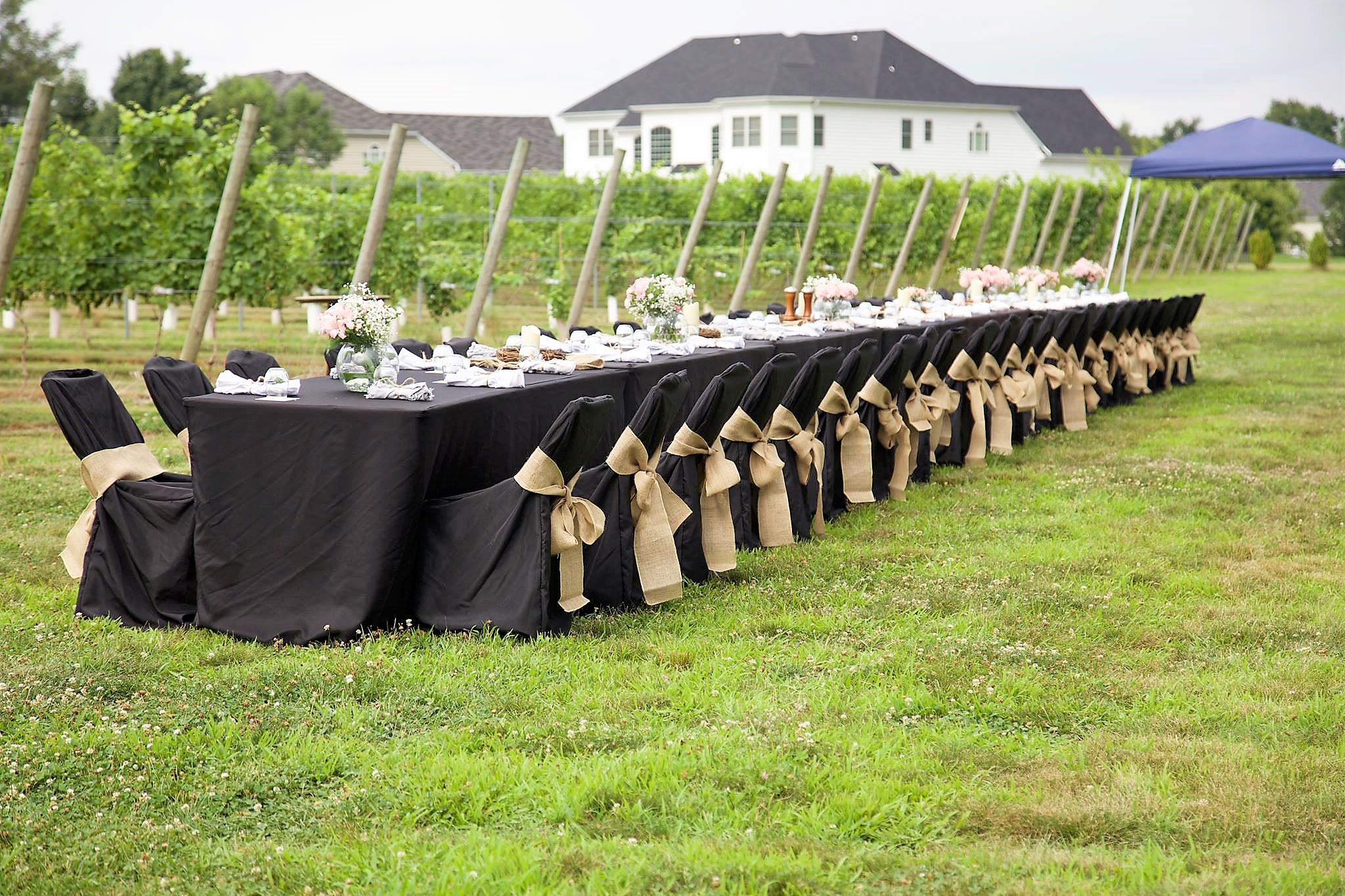 We were then off to a long table set up outdoors amongst the grape vines, where the threatening weather held off through the three courses. We’ll describe the dishes along with the photos. It was all well-done, with only one off-note: the most inappropriate, grating music harshly blasting out of a speaker, by a young guitar and drum duo (who, it turned out, were former students of one of our group). We don’t doubt that the kids have talent but, in this setting, with this food, with that “sound system,” one can only ask: what were they thinking?

Creative food in an enchanting setting — all we can add is, let’s do it again!