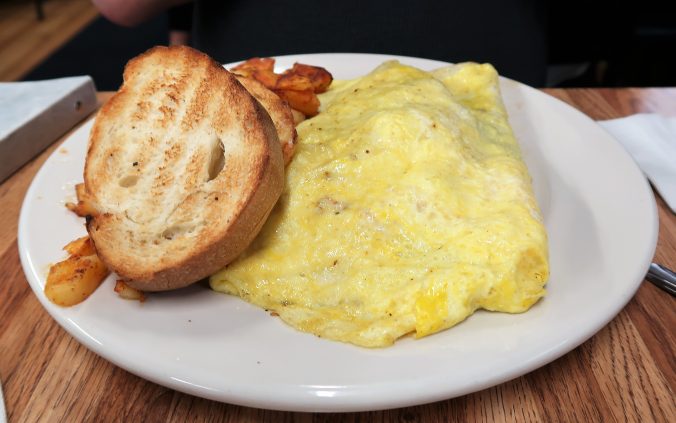 There are more than frittatas on the Mother's Cupboard menu. The omelets are fine, especially when sided by toasted Italian bread.

Ever hear of a frittata? Of course you have! Who hasn’t? It’s an Italianish open-faced omelet. Wait a second, though. We’re not speaking of THAT frittata. We’re talking about the frittata as served in and around Syracuse, New York. Also known as a fretta, a Syracuse frittata is a jumbled amalgam of eggs, potatoes, peppers, onions, sausage, pepperoni, and broccoli, or some subset of those ingredients. Cheese is optional. The other distinguishing feature is that it’s usually a massive plate of food, so much so that, unless the diner is accepting some sort of challenge, everyone orders a half or quarter portion. 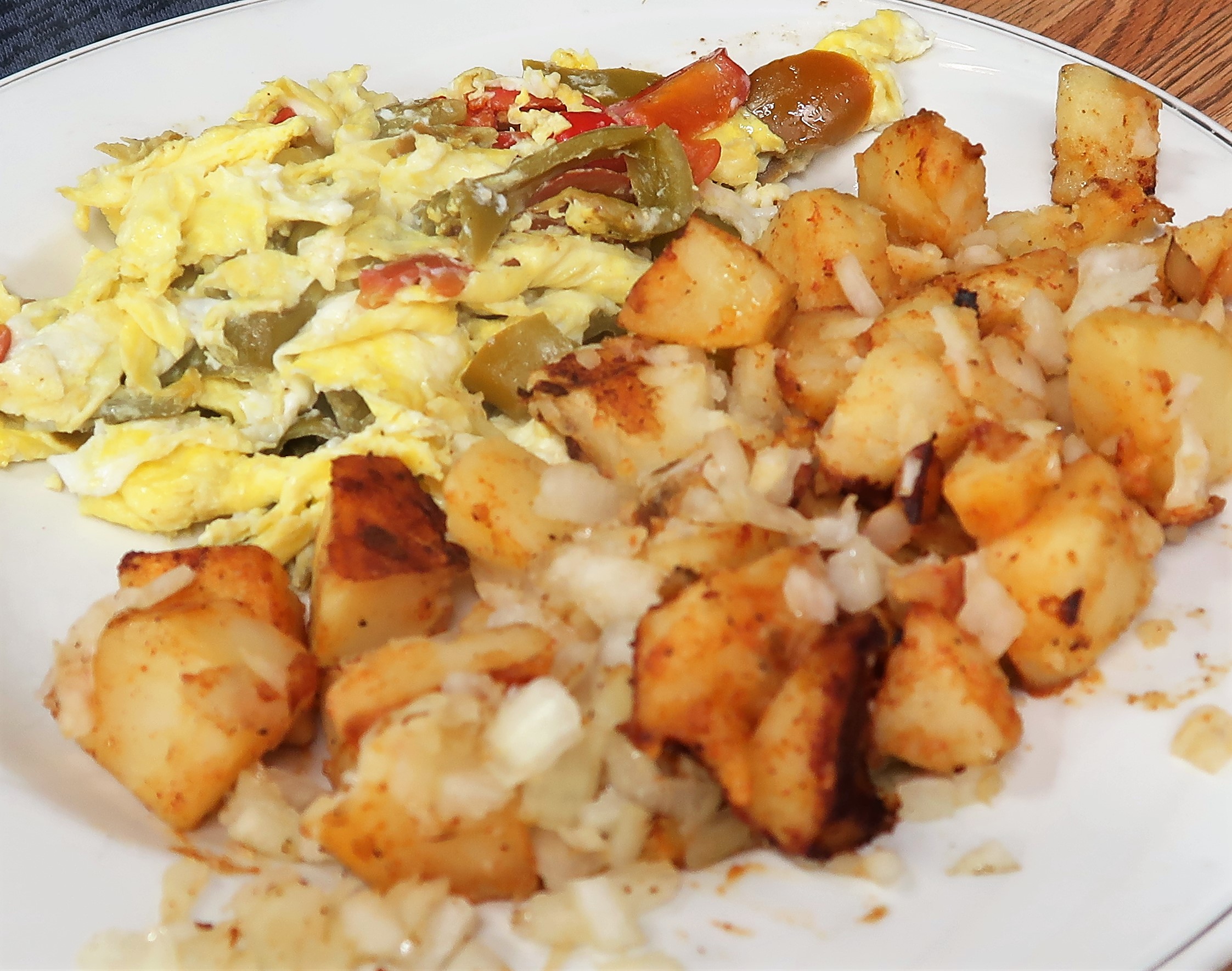 As we said, we forgot to take a picture of the one dish we came here for! Nonetheless, imagine these scrambled eggs and peppers combined with the home fries. Then picture pepperoni, sausage, and broccoli added to the mix, and triple the quantity, and you might have a fair mental image of a frittata.

We’re not upstate New York newbies by any means but we had never heard of this specialty until we were clued in by Central New York culinary savant Bill Homan. Billyboy (his pen name) told us of the finer points of ordering and eating a Syracuse frittata, complete with recommended eateries. We chose Mother’s Cupboard, an easy detour on our drive from Binghamton to Rochester. 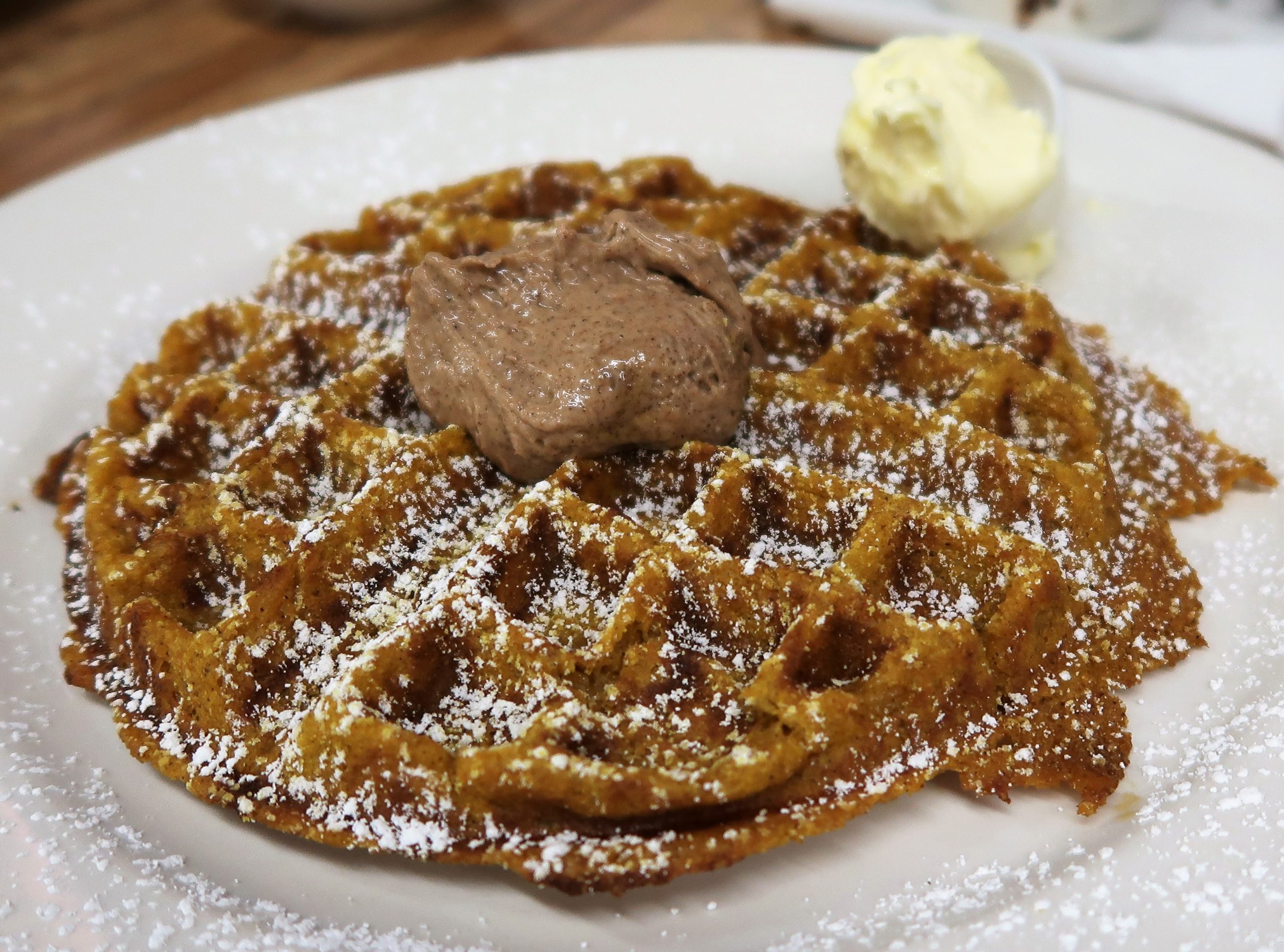 The pumpkin waffle special could have been spectacular as pancakes, but as a floppy, waffle-shaped pancake, it’s a failure. Note to cooks everywhere: you cannot make good waffles from pancake batter. Changes are necessary.

Mother’s Cupboard is exactly the sort of place we’re looking for when we want breakfast on the road. It’s a little roadside shack with a huge gravel parking lot. Inside, the working class diner has a row of eight bolted-in stools at a counter facing the short order action, and across from that is about half a dozen Formica four tops. Above the cooks are three whiteboards listing the breakfast and lunch specials of the day, fun, sweet things like Fruity Pebble French toast or a red velvet waffle with nuts and a cream cheese topping. 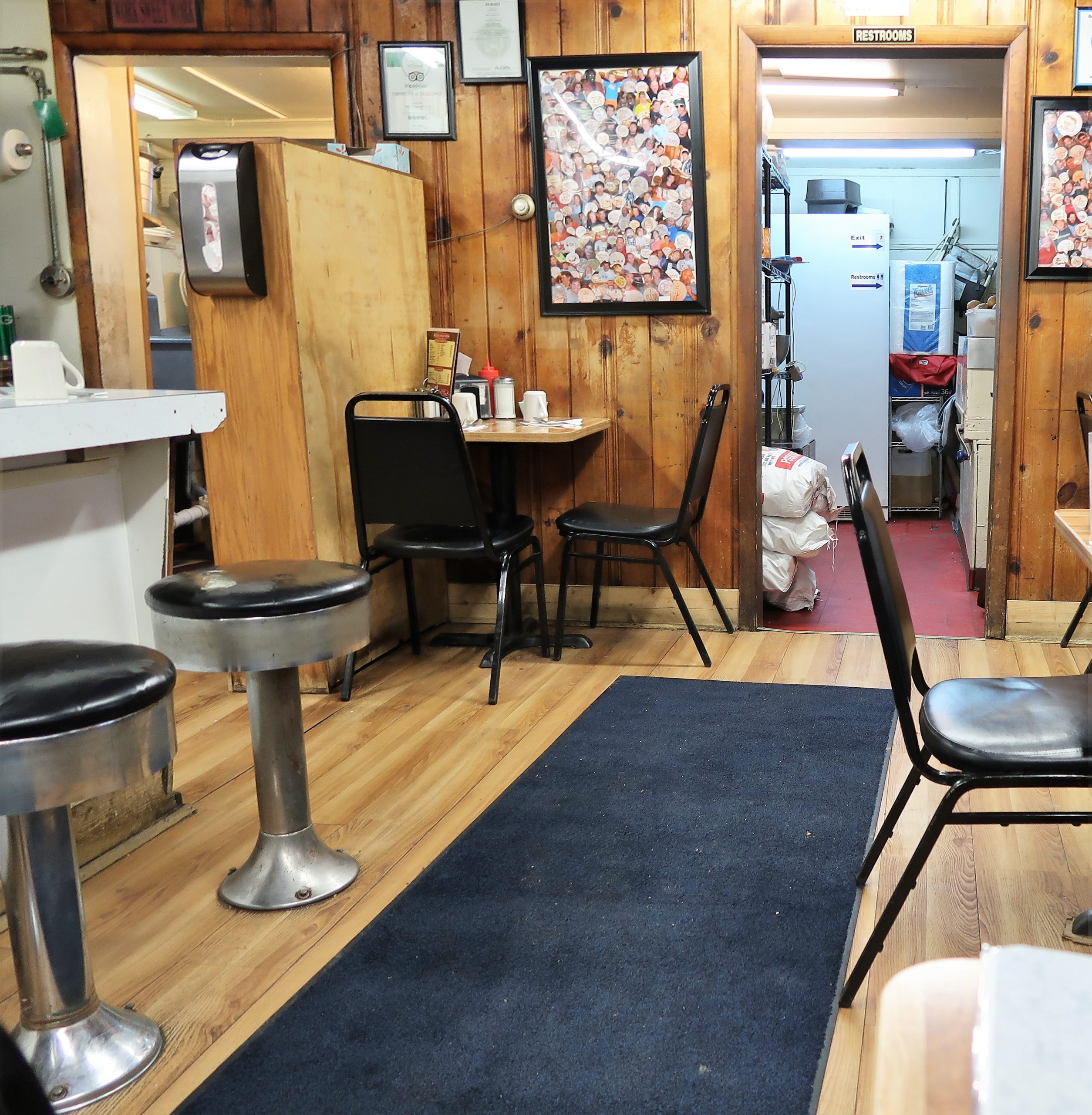 Spied in back: giant bags of potatoes. Any restaurant that serves a Syracuse frittata must go through prodigious quantities of spuds.

The sight of our half-frittata landing on the table before us was so wondrous that we forgot to take pictures of it. Take our word for it: unless you are really, really famished, a quarter is the way to go. Eggs play more of a supporting role here, to the co-leads peppers and potatoes. It’s a surprisingly salubrious dish, helped along by the still-toothsome broccoli florets. Our only complaint: they need to season the dish. Some salt and pepper would do wonders and, no, it’s not the same when you add it at the table. Toast comes with, and what you want toasted is Italian bread. 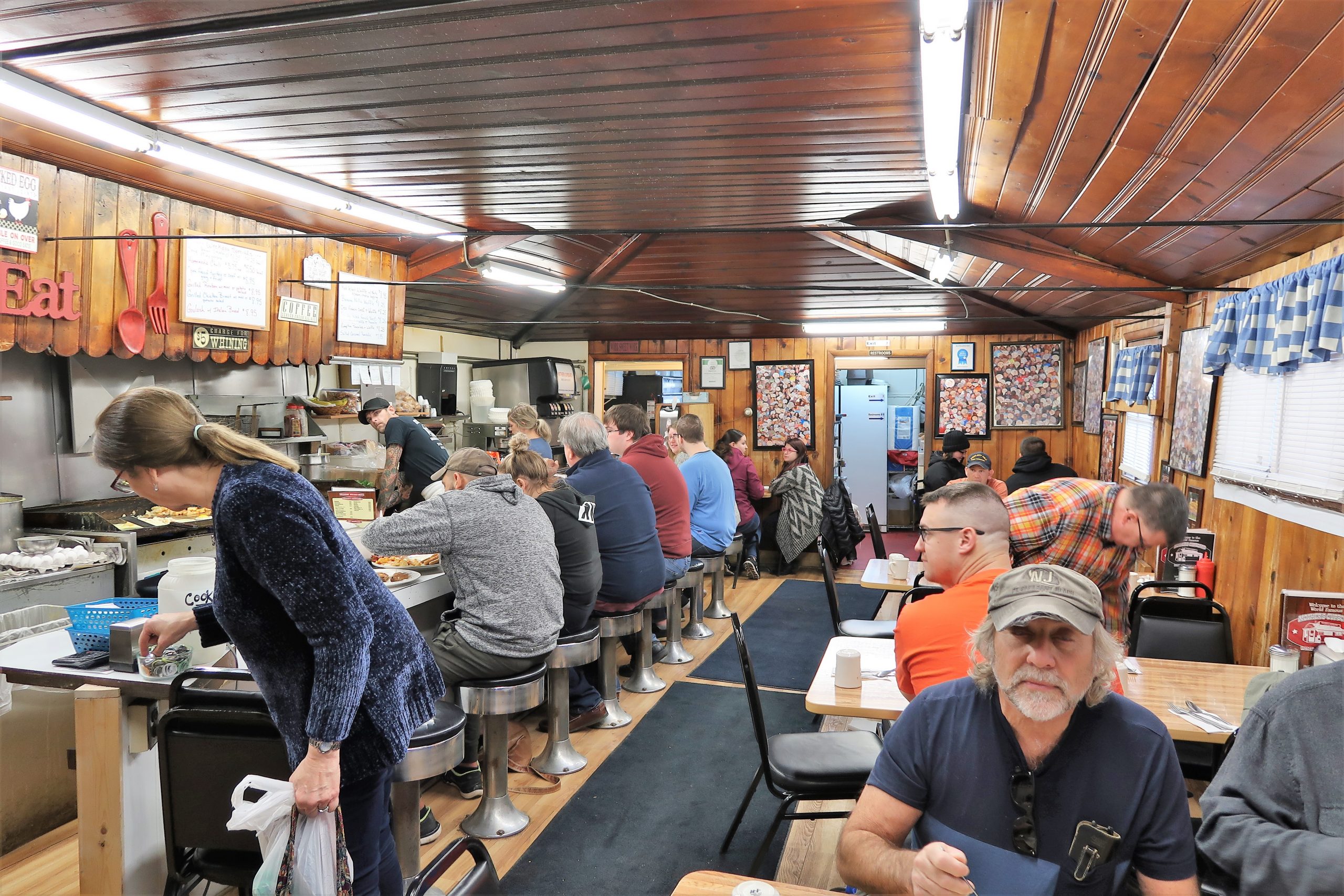 The egg-centric breakfast menu of course offers other options and, as at most diners, you’ll probably be satisfied with whatever you feel like eating. The sign outside says diner and fish fry, and we love an upstate NY fish fry as much as anyone but, if you arrive for a meal other than breakfast, you’re on your own. We’d love to hear about it. But, c’mon, for at least a first visit, ya gotta have a frittata. 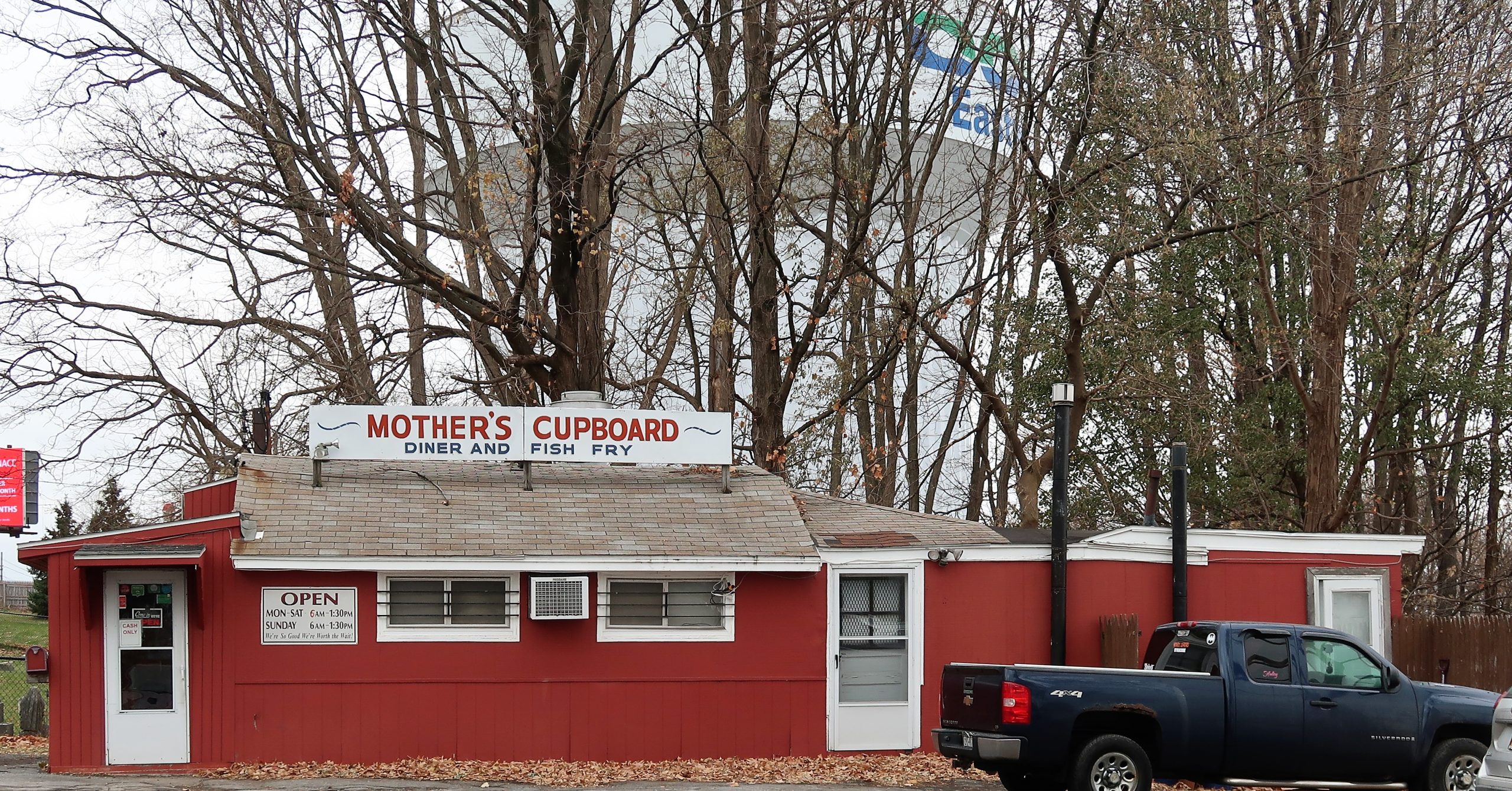 Anyone know anything about the fish fry?